The winner of the 2019 Cairns Cup answered Kirill Zangalis' questions.

A very strong women’s round-robin tournament has just finished in America’s chess capital of St. Louis. The Cairns Cup, named after the wife of Rex Sinquefield, who is the main sponsor of American chess, finished with a triumph of Russian chess players: Valentina Gunina came first and Alexandra Kosteniuk came second. The Russians led throughout the tournament and played for the gold in a final game. The winner was Valentina Gunina- a three-time Olympic champion with Russia and a three-time European champion at an individual level. A few hours after the tournament, she talked to Sport Express’ correspondent.

- Could it be said that this is the greatest success of your career?

- I think it would be better to say that this is another (noteworthy) addition to my collection of medals. I am very happy that I could win such a prestigious tournament. But I think the Russian championship which I also won is not weaker than the Cairns Cup in the level of competition. With regards to significance, I place my individual victories and victories with the Russian team on an equal footing. I hope that we will continue our winning streak in the World Team Championship in Kazakhstan (which starts in Astana on 4th March- ed.).I am proud of my country and happy when we return home with gold.

- You had an astonishing tournament, one could re-watch some of the matches for hours. Your win against Marie Sebag impressed the whole chess world. How do you manage to achieve such results in such a dramatic style?

- Overall, I am happy with my performance. My coach was also happy with me! I played an interesting gameagainst Sebag and I enjoyed it. Our last two rounds were a real melee- there is simply no other word to describe it. I wasn’t expecting such a performance from myself.

- You only had to draw in the last round to finish first, but you could have won the game…

- I have yet to analyse my gameagainst Alexandra. Of course, there were many emotions, hands were shaking and my mind was clouded. I barely understood what I was doing; it seemed that myhands knew where to place the pieceson their own. It looks like I have a good autopilot... 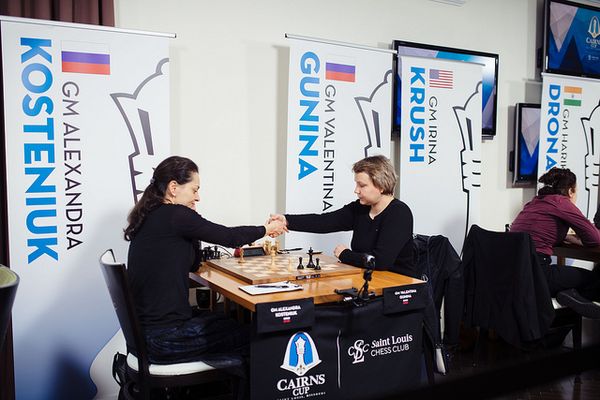 - What are your overall impressions from the tournament?

- I sincerely hope I’ll be invited back next year. I liked the organisation: they have built a fascinating club over here, many people work in chess and I came away happy.

As always in round-robin events, a few people were catastrophically unlucky. In this tournament, Elisabeth Pahtz was that victim, but anyone could have been in her place. I heard that a few of the girls struggled with acclimatising. But I had no trouble, even though it was my first visit to America. I often travel to China, so I have a few secrets…

- Given that this is your first visit to the US, what are your impressions outside of chess?

- I didn’t have too many of them, unfortunately. There was, of course, shopping- I am a woman after all. I managed to sneak in two shopping trips during weekend days. I also hope to see the city a little before the closing ceremony- that would be wonderful.

By the way, a trip to America was near the top of my wish list. And everything went very well. I’ll have to remake my wish list once again…

- The prize for first place is $40,000- almost a record for a women’s tournament. How do you plan to spend it?

- Believe me, I will find ways to spend it. I have many, many plans.

- Do you have a plan to become world champion? Your potential is well-known, but something always gets in the way, doesn’t it?

- I think I could do with some more stability. But we have already drawn up a preparation plan with my trainer, and we are following it closely.

- Both you and Alexandra Kosteniuk spent a lot of energy at this tournament. Do you think you’ll have enough left for the World Team Championship in Astana?

- I came to St Louis straight from a tournament in Gibraltar, so naturally there is fatigue. But never mind, the team training starts soon and a massage therapistwill be attached to our team. He is indispensable for me!

- Has it been a long time since you were home?

- Yes, and I miss itvery much! My “tails”- a cat and a dog- also miss me. I’m waiting for the moment when my mother will make lunch at home, since she is a wonderful cook. But I’ll only have five days for these joys of life.

- After these victories, one grows wings. How big are yours?

- You remember the angel in X-Men? That size, and that’s a wonderful mind-set before the World Team Championship! 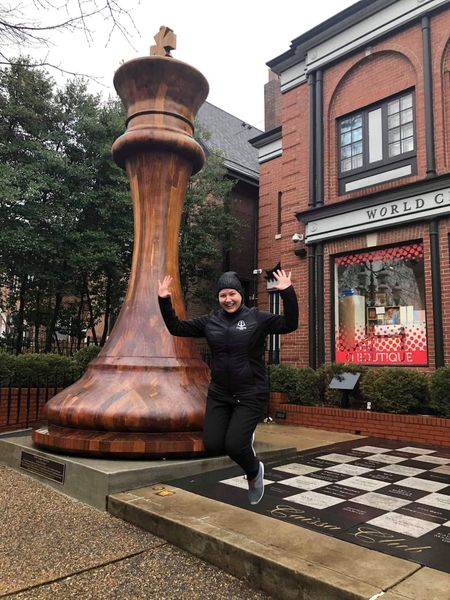 - I congratulate the girls on a fantastic result! From mid-tournament onwards, it became clear that Valentina and Alexandra were fighting for first place. But I don’t feel any euphoria; since China and Ukraine didn’t send their players to the Cairns Cup, I wasn’t expecting any other result

The World Team Championship is right around the corner and most of the strongest players will compete. In training, we shall work hard, so that our girls will approach the tournament on peak form.