The Soviet championships always had such a participant – a bright player with combative games, but bereft of luck and usually characterized by his creative success being higher than his athletic ones. There spring to mind such names as Viktor Kupreichik and Anatoly Lutikov, and in this Superfinal in the city of Ufa such a player turned out to be Maksim Chigaev. We will now look into Chigaev's two lost games that plummeted him into the undeserved last place (he had played well in the previous Superfinal). 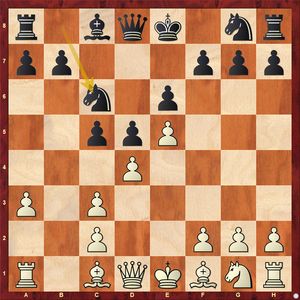 The so-called Vastrukhin line of the Winaver French. I recalled the tournament in the city Maykop of 2006, organized by the famous patron Aslan Beshukov. We then shared a hotel room with my friend Boris Savchenko and decided to go to the market to buy some May strawberries and homemade milk one day. It happened later that a cherry plum flew through the window and landed into our milk! Savchenko frowned: "This is Oleg Vastrukha ... He knows to do only two things – to throw cherry plums and play 6...Nc6 in the French!"

This is when I first saw a boy wearing glasses and with a smile on his face that is hard to forget. As time went on, Oleg became Oleg Alexandrovich, but his smile and glasses remained the same. The genius of blitz from the village of Yablunovsky employed the line bearing his name to knock down Evgeny Alekseev, Sanan Sjugirov and Vladislav Artemiev on board one of the last Russian blitz team championship, as well as outplaying many famous GMs. He even defeated Nakamura, upon which chess.com blocked Vastrukhin's account. However, no matter who will try to ban our hero, his line version is pretty much alive and gaining popularity quite rapidly.

As Maxim told me, he decided to sidestep the beaten track.

Here the grandmaster of chess and chess commentary tried 8...Qa4!?, as in Ya. Remizov – Shipov, lichess.org 2021, but Ponkratov follows in the footsteps of Vastrukhin.

The modest 9.Be2 Bd7 10.h4 0–0–0 also featured in one of the line originator’s games: Labussier – Vastrukhin, chess.com 2020. However, Chigaev was eager for action. Chigaev’s opponent was up to the challenge, needless to say.

White could have stopped Black from castling with 12.Qf4!?

14.Qg3 should have been preferred. Now the white queen falls under the barrage of fire. 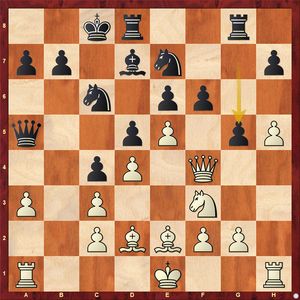 A fantastic idea; White gives up his queen for a rook and some passed pawns (the queen just stood in Chigaev’s way!)! Chigaev calculated that after 15.hхg6 Nхg6 16.Qхf6 Rdf8 17.Qg5 Ngхe5; 15.Qh2 f5 the initiative belonged entirely to his opponent and decided to go for it.

In this unique material balance the pawns are potentially extremely dangerous, but you should exercise very careful judgment in pushing them: 20.h6 Rh8 21.Nf7 Rh7 22.g4 (22.Bh5 Nхh6!) 22...Be8, and Black is close to annihilating all White's pawns. 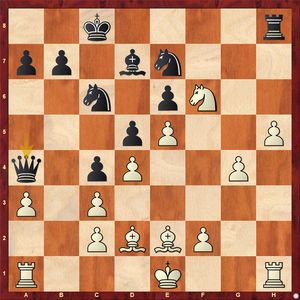 A fatal blunder. The white king walks into the mating embrace of Ponkratov, whereas 23.Bd1! would have made the battle outcome unclear.

25.cхb4 Nхd4 is bad, but the alternatives are no better.

In the next round, Maksim Chigaev faced Alexander Motylev, where it remained unclear whether White would convert his extra exchange. 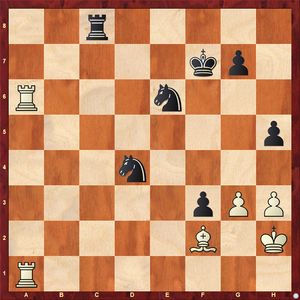 This is forced, otherwise 50...Кg7 is met by 51.g4. The Russian men's team coach spends the next few moves to do away with the g4-pawns, but Black's more valuable pawn is still alive.

Of course not 57...Ng5? 58.Rf4+, but so far the knights manage to keep the position together quite skillfully. 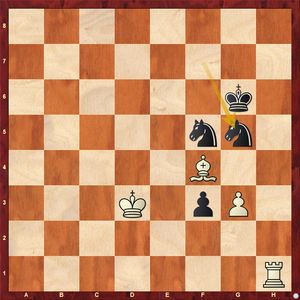 Pavel Ponkratov is also someone to single out among non-prize-takers – at first the native of Chelyabinsk, now representing Moscow, lost his game, and then he turned out to be the main hero (or anti-hero) of the ultimate round. 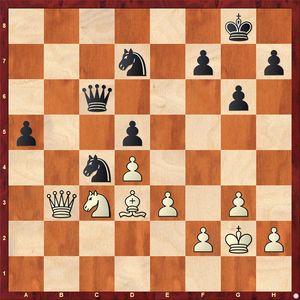 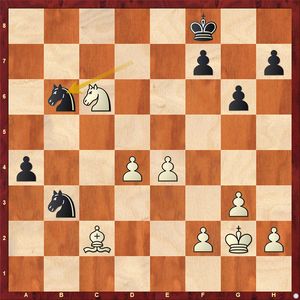 White should have sacrificed the minor piece: 47.d5 a2 48.Nхa2 Nхa2 49.Кf3, hoping to build up a fortress with a strong bishop and a chain of pawns, and also keeping in mind that two knights without pawns is not a win. 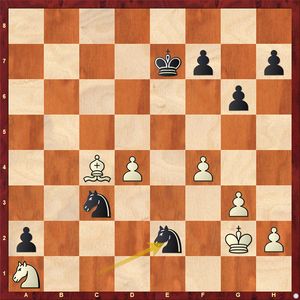 White is saving his bishop. He should have given up his pawns instead: 54.Кf3 Nхd4+ 55.Кe3 Ndb5 (55...Nc6 56.Кd2) 56.Кd3, with chances to make a draw. Now Predke appropriates everything, much like in the years of food surplus requisitioning in the Soviet Russia.

58.Bхd5 Кхd5 59.Кc3 Nf3 is hopeless for White, which means that both White’s proud bishop and pawns are about to fade into oblivion.

Aleksandra Goryachkina proved a real fighter capable of taking the blow, but strong men still managed to upset her once again before the finish line. 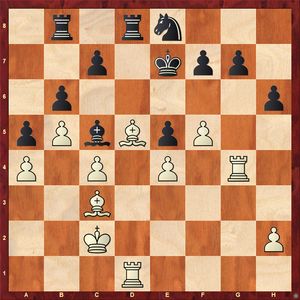 38.Rхg7 Nхg7 39.Rхg7 Rf8 40.Bd2! is an option, but the St.Petersburg GM is not in a hurry to sacrifice the exchange, looking for the fruit to ripen and fall into his hands by itself. 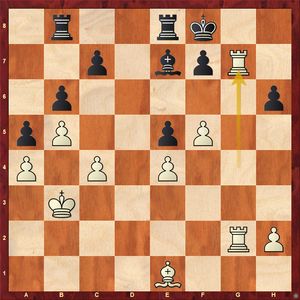 Going into the last round, the standings were as follows: only two players could overtake and challenge Nikita Vitiugov on a tie-break – Maxim Matlakov and Vladimir Fedoseev. The former managed to draw Andrey Esipenko as Black, which became Matlakov's 11th one in this tournament. However, Fedoseev's battle with Ponkratov was nothing short of an action movie.

One of the crucial moments in the history of the Ufa region is the battle between the army of Frunze and the armed forces of Kolchak that dates back almost a century ago (102 years, to be more precise). The legendary Vassily Ivanovich Chapaev was in charge of one of the heroic units headed by the red commander Frunze. Opposing him was the much worshipped among the White Guards and Cossacks General Khanzhin, no less mustachioed and fearless a fighter. This bloody massacre even featured in the movie "Thunderstorm over Belaya", which used to be very popular in Soviet times.

When the entire board was on fire, one of the GMs texted me: "Today Ponkratov is fighting White for his dear life, as if he were Chapaev!" 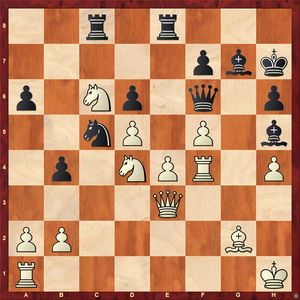 This is an exchange sacrifice, although Black could have acted more calmly with 30...Rg8.

The game enters the stage of conversion after 33...Qхe3 34.Rхe3 Bf8 35.Nхb4, which makes Black sacrifice more material to keep the attack rolling. In his turn, Vladimir returns material and goes with all his might against the opponent's king. 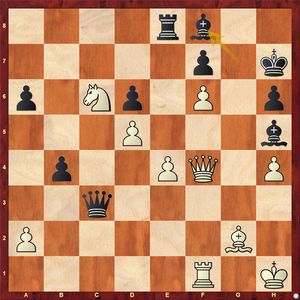 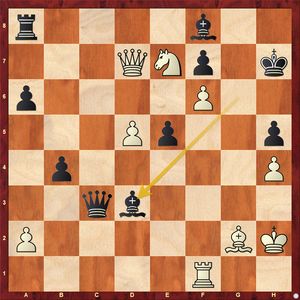 White should have put up with 46.Кh1 Qc1+, but in an attempt to catch up with an escaped victory White missed a crushing counterblow. 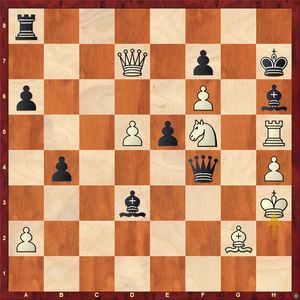 As a consolation, this game's loser nevertheless finished third by tie-breakers after Nikita Vitiugov and Maxim Matlakov.

Congratulations to Nikita Vitiugov! In some games luck clearly sided with him. However, with so many Superfinals under his belt now, it should have happened at least one, as the winner himself highlighted!