Round Two of FIDE World Cup Starts in Sochi

Top players headed by Magnus Carlsen have joined the race. 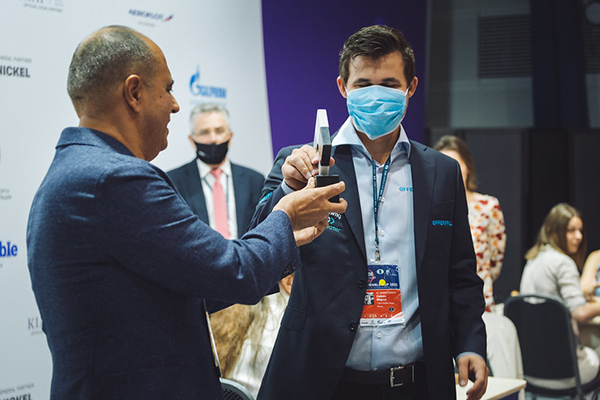 Round two of FIDE World Cup began July 15 at the Galaxy Entertainment and Leisure Complex of Krasnaya Polyana. 50 strongest grandmasters, led by the world champion Magnus Carlsen, and 25 strongest female players have joined the round one winners.

Before the round began, FIDE Vice-President Mair Mamedov awarded Magnus Carlsen with the Fair Play prize named after the famous Yugoslav GM Svetozar Gligoric. This award is about giving due to the person who demonstrated exemplary behavior last year that promotes fair play and athletic mastery in chess.

This day Magnus Carlsen was Black against the Croatian GM Sasha Martinovic and won as soon as move 34. In mid-game Martinovic set a small trap for the champion by leaving a pawn en prise, which seemed untouchable for loss of a bishop. On closer inspection, however, the “poisoned” pawn proved not that poisonous after all: Carlsen took it and then came up with a tricky tactics to save the bishop and confidently bring his material superiority home.

After the game, the world champion answered many questions posed by mass media’s representatives. Thus, he told about having undergone the first dose of the vaccine against COVID. He also congratulated Ian Nepomniachtchi on his birthday of July 14. It so happened that Sasha Martinovich's birthday is July 15. An over-the-board encounter with the reigning world champion is arguably the best gift for the 30th anniversary.

Unfortunately, the Armenian grandmaster Levon Aronian, the world's only two-time World Cup holder, could not play the first game against Bobby Cheng from Singapore. This week Aronian has developed cold symptoms and was isolated from other players for the period of testing. Even though Aronian is feeling well, it has been decided that he restrains himself from playing game one. The player is to undergo an additional test to clarify his ability to play game two.

Besides, one of the participants of round two has tested positive for COVID. The test result came out while today's game was still in progress. In line with the tournament’s medical procedure, the player immediately abandoned the playing hall and his game was forfeited. The player was wearing a mask during the game. He is in quarantine now. His opponent was also obliged to abandon the playing hall and is undergoing an additional medical examination. He is scheduled to take his next Covid-19 test tomorrow morning.

Day one of round two brought no setups either in the open or in the women's sections. Those to begin the World Cup on a victory note included, among other players, the Russians Sergey Karjakin, Dmitry Andreikin, Peter Svidler, Evgeny Tomashevsky, Vladimir Fedoseev, Maxim Matlakov, Vladimir Malakhov and David Paravyan, as well as Anish Giri and Jorden Van Forest (Netherlands), Boris Gelfand (Israel), Anton Korobov (Ukraine), and Yu Yangyi (China).

Return games of round two are scheduled on Friday, July 16. Games start at 15:00 (Moscow time).