One Match at the Prize of Three

Participants returned to the second round’s pattern: the outcomes of two games were determined in the regular time, while the other two went into tie-breaks. The time for sensations was over – only famous players whose chess strength had long been known, qualified for semi-finals.

The best player of the round was Lagno who had shut out Lei Tingjie. In the first game, the Chinese was unprepared for a rare scheme in the Petroff Defense that Grischuk had recently employed in a couple of his blitz games. She relinquished space and obtained passive position; exchange of the queens served only to add to her problems. The Russian player was building her pressure smoothly, and when her rooks invaded the 7thrank, Black’s position became critical. White’s only inaccuracy on the move 40 allowed her opponent to prolong resistance, but not for long.

In the second game, Lagno played actively during transition from opening to middle game and, by launching her pawn assault on the left area of the board, gained quite a good play. After opening of the center, tactical complications began, where Lei was unable to retain material balance. 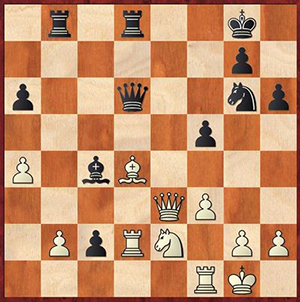 30.Ba7. And here White should have changed routes for her queen and bishop! After 30.Qc3 Bxe2 31.Ba7, she regains both the exchange and the c2-pawn with roughly equal chances. 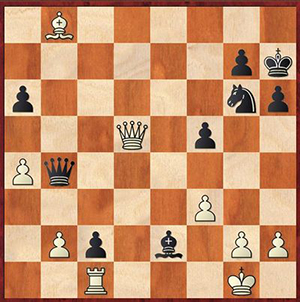 34...Qb6+! A splendid maneuver! Every other move throws away the advantage.

On the second day, it seemed that the reigning Champion of the World would be the first to qualify for semifinals. The day before, Tokhirjonova held out with Black rather confidently; however, while playing with White in the opposite castled position, she gave up the initiative quickly. 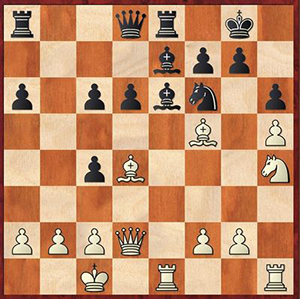 Black is already a pawn up, and her precisely calculated combinational maneuver allows her to magnify her material advantage considerably.

22.Rxe1 Bxd2+ 23.Kxd2 Qg5+ 24.Kd1. Now the toughest move was 24...c5, but Ju was late with it, and the inventive Uzbek girl went for complications by sacrificing the bishop that her opponent had neglected to eliminate in time. The World Champion failed to cope with this reversal of the situation immediately and threw away almost all her advantage. However, on the technical stage she was able to “re-win” the game. First, she had gained a knight for her passed pawn, then coordinated her forces by exploiting the opponent’s inaccuracies and managed to keep the only remaining Black pawn alive.

In the regular games, both Kosteniuk and A. Muzychuk demonstrated their excellent opening preparation and made two academic draws.

In the first 25-minute tiebreaker, the discussion in the Chelyabinsk Variation continued. Having obtained a favorable change of the pawn structure, the former Champion of the World got carried away with the idea of an attack on the kingside, and lost coordination of her pieces. Her threats to the king had dwindled away to nothing, and Black’s central passed pawn was more than adequate compensation for the one she had given up. However, at this moment, Muzychuk made two bad moves in a raw, and her main trump was eliminated.

Kosteniuk attempted to benefit from her achievements immediately and gave the opponent a chance to escape. 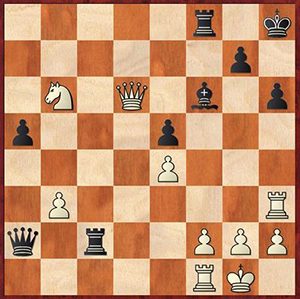 In the return game, her reaction to the Dutch Defense Reversed employed by her Ukrainian opponent was far from perfect, so Kosteniuk found herself in a highly unpleasant situation. Undaunted, the former Champion of the World kept searching for resources to continue the struggle. After mutual inaccuracies, the opponents came to an endgame where White completely dominated in spite of the lack of a pawn. Kosteniuk managed to find the best practical chance: she gave up her knight that kept brooding hopelessly on the edge of the board, and activated the rest of her pieces. Muzychuk lost the thread of the game and parted with both her second-to-last pawn and her hopes for a win. In the ending, the Russian had opportunities to realize her extra pawn but was content with a draw that was her pass to semifinals.

In the duel M. Muzychuk vs. Abdumalik, there were more games played than in all other matches combined.

In the first regular game, the former World Champion emerged from the opening with an initiative but, after Black had sacrificed a pawn for the sake of opening files, she started missing combinational blows. 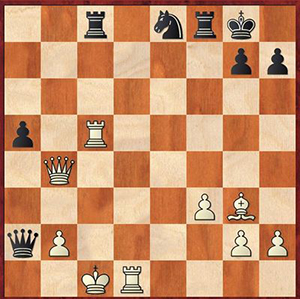 The struggle in the second game was also complex, and the Kazakhstani player managed to win the exchange. However, Black’s bishop pair was an adequate compensation for this and, after Abdumalik’s rook got tangled in the enemy back ranks during her attempt to prevent her opponent’s counterplay on the queenside, Muzychuk restored material equality and accurately utilized her positional plusses.

In the first 25-minute game, she again showed both her skill and her self-possession in a complicated endgame. When the crunch came, Abdumalik failed to find an interesting defensive idea. 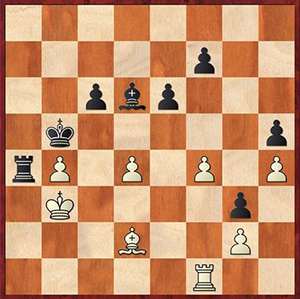 Muzychuk was unable to hold her lead. There were many adventures in the game that continued for 90 moves. After the opening, the Ukrainian’s position was dubious, so she opted for a piece sacrifice in order to create pawn center.  At the proper moment, Abdumalik carried out an exchange combination and obtained a clear edge with her two pieces for a rook; but later she gave counter-chances to her opponent, and it was already White who had her reasons to play for a win in the endgame with an outside passed pawn. However, Muzychuk allowed the exchange of her main trump, and Black once again turned to be a stronger side in the position with pawns on the same flank. She carried out a carefully prepared advance of her edge pawn and, after White’s error that followed immediately, eliminated the main obstacle on its path to a queening square with her dynamic rook maneuver.

The first 10-minute tiebreaker is sure to make a place for it both in the books on chess curiosities and in textbooks for chess arbiters. The quality of play was high enough with an exception of a mutual slipup in the opening, when an artless attack against black bishop could have run into quite an obvious sacrifice that would leave her with considerable advantage. After long maneuvers typical for hedgehog structures, Abdumalik carried out a breakthrough in the center; however, this allowed Muzychuk to gain a long-lasting edge in the endgame. Eventually, everything boiled down to a theoretically drawn rook-and-knight-versus-rook ending, but tension and tiredness made their presence felt here. Black made a fateful error, and her king got into mating net. It was then that Abdumalik missed her final and rather absurd chance. 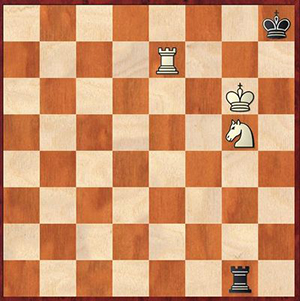 Mate is inevitable, so the Kazakhstani player resigned. However, after 135...Rf1 136.Re8+, there is still no mate on the board but check only, and White’s latest capture has happened on the move 86. Thus, adrawbythe50-moverule!

And even after such a defeat, the younger chess player managed to bounce back once again. In the second 10-minute tiebreaker, Muzychuk made a strategic error in the level middle game position, which led to an appearance of a backward pawn in her camp. An attempt at improving this positional defect resulted in a deadly pin on the black rook.

Both players’ nerves were frayed, and in the first blitz game Muzychuk promptly lost a pawn with White; Abdumalik returned the favor by overlooking a standard blow. Black’s king that was stuck in the center found itself in a pretty pickle, and she was left a piece down.

The former Champion of the World obtained a comfortable play with Black and, in spite of her couple of inaccuracies, generally remained in control. In a position was that already clearly better, she first destroyed the enemy king’s cover with her rook sacrifice and then forced a draw that was equal to a victory for her.