Round 1 of Women's World Championship in review by Maxim Notkin

There were practically no surprises in the matches where opponents were divided by a rating chasm of several hundred points. Favorites (Ju Wenjun, Koneru, Lagno, Kosteniuk, the Muzychuk sisters, Tan Zhongyi, Dzagnidze, Goryachkina, Gunina) confidently proved their superiority in one way or another, though not all their matches were perfect. For example, Goryachkina’s performance with White had been rather unstable, but on the next day, she was “calling all the shots”; as for Gunina, it seemed that, after interesting events in the end of the first game, she did not intend to play for a win in the second one. 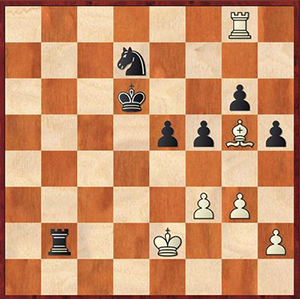 In the roughly equal ending, Black periodically managed to set certain problems for her opponent, but now White seems safe, even in spite of being a pawn down.

44...Kc4! There is a threat of mate 45...Nd5#, and the only way to prevent it is to give up a rook for a knight because the с8-square is inaccessible for this piece.

The only sensation in this group was Paehtz losing to Alinasab from Iran.

With White, the German player obtained spatial advantage and sacrificed a pawn, but was too slow with decisive actions. The advantage moved to Alinasab who won the game in the end, though in the rook ending that some years before would be defined as “theoretically relevant” (6- and 7-piece chessbases offer precise answers to every question now), White could have escaped with precise play.

In the second game, Paehtz had given up material for the initiative once again, but her handling of the latter was far from perfect. The only reason for Alinasab failing to whitewash the opponent was the Iranian’s slipshod play.

The outcomes of three more matches can be formally considered surprising, but since Hou Yifan’s debut in the World Championships, it has been generally known that young Chinese players are liable to pull anything out of the hat.

In the first game, 16-years-old Zhu Jineer had outplayed her highly-experienced opponent Javakhishvili in complicated struggle rich with tactical nuances; in their second duel, the Chinese player stood worse in the ending but managed to exploit her opponent’s inaccuracy and equalized with active play. Having gained an advantage later in the game, Zhu Jineer rejected possible repetition of moves and made the best of her chance accurately.

The score of the match Zhai Mo vs. Girya was also clean. The rating difference of more than a hundred points must not hide the fact that the Chinese player is a winner of the last Olympiad. The beginning of the first game was favorable for the Russian, but a slight snag in the development of her attack was enough for White to block the access to her king’s position. Compensation for a pawn evaporated, Zhai started massive storm on the kingside and magnified her material advantage.

In the second game, Girya was unable to create serious challenges for her opponent and later missed a nice little tactical blow in time-trouble. 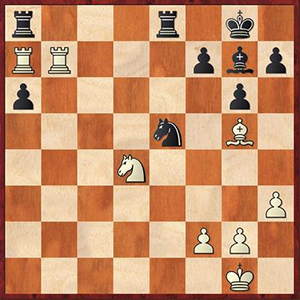 Kashlinskaya’s supporters hoped for continuation of her winning streak that had started on the Isle of Man; however, in the first game she made three bad moves in a row in the time-trouble fever. 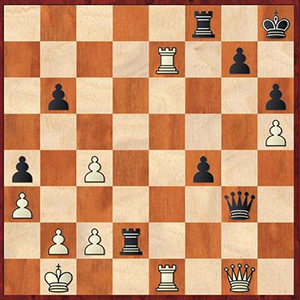 In the second game, the Uzbek player managed to hold a slightly worse ending with confidence.

Zhao Xue never encountered any serious resistance in her first game against Lujan and, by confidently controlling the course of events in the second one, managed to seal her success.

The struggle in the first games of matches Pogonina vs. Kulkarni and Batsiashvili vs. Arakhamia-Grant was hard enough, but Black’s errors before the time-control resulted in their losses. Opponents gave them no chances to equalize on the next day.

Playing with Black against Ushenina, Mkrtchian failed to emerge from the opening. In the second game, it was already former World Champion’s play in the opening that was far from exemplary. As a result, she almost lost her queen but managed to minimize losses and hold her own in a pawn-down ending.

Socko won her first game against Shvayger with Black after the latter had given up the central file on her own free will. In the second duel, the Israeli player managed to create an unpleasant tension in the neighborhood of the enemy king’s residence, but her Polish opponent launched an energetic counterattack and forced a draw.

The story of those matches was merged into one section because in both cases winners managed to gain their desired perpetual checks by sacrificing their rooks.

Khotenashvili and Zawadzka moved on to the second round after winning their second games with White.

The Polish player had no problems in her first game against Guseva. On the next day, she turned out to be more enterprising in the opposite castled position and created decisive mating threats after queens had already been exchanged. Actually, she did mated her opponent.

Vo from Vietnam had an advantage against Khotenashvili but was not sufficiently energetic. The Georgian’s win in the second game can be described as difficult but well-deserved.

In 11 matches, the “regular time” ended in a draw, and only in one of those an exchange of blows happened: after having lost her first game to Zhukova, Ni Shiqun managed to take her revenge with Black. They were also the only pair for whom two 25-minute-long tie-break games were not enough to determine a winner!

Harika in her match against Khukhashvili missed quite a good chance to win the second regular game, while in the second rapid one it took a miracle to save her from leaving the championship. 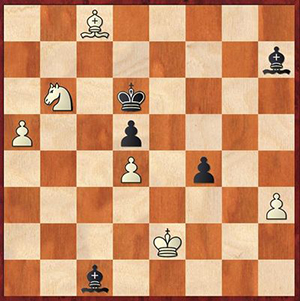 In an equal minor-piece ending, it seemed for a long time that maneuvers occasionally interspersed with pawn exchanges would result in a boring draw. Around move 60, situation sharpened as both sides managed to create passed pawns.

In regular times of confrontations Abdumalik – Padmini, Krush – Gaponenko and Atalik – Cori the struggle was equal.

During a tie-break between Abdumalik and Padmini, Black had the initiative. In the first game, the Kazakh player’s resistance was successful, and in the second one, she managed to break the opponent’s defense eventually.

Krush had won the strategic battle with White, but then made several errors after opening of the center. However, Gaponenko, instead of exploiting the open position of white king, transposed into a pawn-down ending. In the second game, she rejected logical repetition of moves, went off on a tangent and lost.

Atalik handled the opening with Black rather solidly. Cori had been suffering from her pawn weaknesses throughout the game, so her defeat was generally logical, although she had certain chances for an escape. In the second game White, in a safe pawn-down ending, managed to find a clever plan connected with trapping the enemy knight. The Peruvian did not take into account a simple tactical nuance and gave it up “for free”. All that was left to her after this was resign.

In her first regular game against Foisor, Stefanova, who was a pawn up, played herself into a lost position; and in the second one, she missed her chance to score.  During tie-breaks, the former World Champion was much more cool-headed than her opponent. In both cases, the outcome was decided by great material gains.

While playing with Black against Vega, Bodnaruk opted for a dubious exchange sacrifice, but then managed to create counterplay in the time-trouble that turned out to be sufficient for a draw. In the second game, she had considerable positional edge but failed to break her opponent’s defensive lines. In the first rapid game the Spanish player rejected repetition of moves in the middle game; however, after exchange of the queens, Bodnaruk captured the opponent's weak kingside pawn and realized her advantage flawlessly. In the second game, following her reckless exchange sacrifice, Bodnaruk eventually had to defend an unpleasant ending. Vega failed to find an active plan and allowed her opponent to establish cooperation of her pieces; then, after freeing the enemy passed pawn, she could have lost, but the Russian player contented herself with “piece enforcement.”

In the match Nakhbayeva vs. Galliamova, Black was looking better in the regular time, so a couple of draws was more or less logical outcome.

The struggle in the first rapid game was complex and eventful. Galliamova pushed forward her passed pawn but underestimated her opponent’s threats on the kingside; however, at a critical juncture Nakhbayeva suffered a blind spot. He had a spectacular winning blow at her disposal, but chose another move… 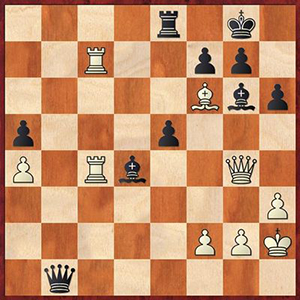 In the second game, the Kazakh player chose a passive scheme aimed at avoiding quick exchanges. Her plan did work out, but only in part. After opening of the game, White threw away a considerable part of her advantage, but the fact that the outcome of the match would be favorable for Galliamova was never in doubt.

In her first game against Saduakassova, Matnadze missed a beautiful winning chance with Black. 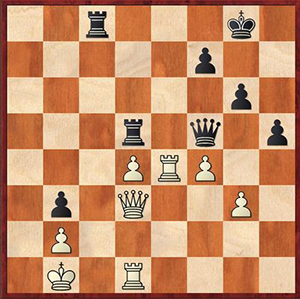 On the next day, the Spanish player offered a draw on the move 9.

In the first rapid game, she let down her guard and lost two pawns in three moves. In the second one, Saduakassova, who played with Black, demonstrated her better knowledge of the opening variation and managed to gain a won position by the move 20 by simply repeating the game Markowski-A.Onischuk (1999).

With White, Lei Tingjie had frittered away her enormous advantage against Gara and then threw away the exchange; however, the Hungarian lacked both strength and determination to start playing for win in earnest.

After first day’s tribulations, the second game of the match was drawn quickly.

In the first 25-min duel, Gara made a standard move in the middle game without considering tactical opportunities of the position. Employing a pin, the Chinese player gave up her two minor pieces for a rook and two pawns with an advantage. In the second game, Lei Tingjie had once again evaluated consequences of a non-equative exchange better and, after gaining two pawns for an exchange, encountered no serious resistance in the endgame.

Match Hoang Thanh Trang vs. Danielian was abundant in plot twists too complex to be described here in detail. After saving the second regular game by sheer miracle, Hoang played strongly in the first rapid one and won through technique. With White, the Armenian once again had real chance to win around move 30, but her knight was much too late to move to с5.

In the first regular game of the Ni Shiqun’s match against Zhukova, the Chinese player gradually lost the initiative. Black obtained both a better pawn structure and a spatial advantage. Finding himself up against the ropes, White broke under pressure. Exploiting her error, Black executed a maneuver, after which both queens had disappeared from the board, but she immediately gained a brand new one.

On the next day, the Ukrainian first agreed to small concessions in the level symmetrical position and then made a sharp erroneous move that led to a loss of an exchange. Ni Shiqun’s handling her material advantage was far from exemplary, and soon White had a chance to establish cooperation of all her forces by activating her knight. Instead, there followed a blunder that doomed that piece.

In two 25-minute games, the balance remained undisturbed. In the level ending of first 10-minute one, Zhukova miscasted her pieces and sent her king to the queenside, leaving the opposite flank defenseless. Her opponent created a passed pawn there that decided the outcome. In the last game of the WCh’s first round, queens quickly disappeared from the board, and White drew from the position of strength in a structure with an isolated pawn.