- Margarita, my congratulations on your big success! First of all, tell me what happened in round one. How was the tournament unfolding for you?

- Aleksandra Maltsevskaya was not making it in time from the airport and did not show up for the game for that reason (the near Moscow region player was on her way by plane from the European Women’s Championship – ed.). I was told that she was not coming. I went down to Alexandra Obolentseva in round two, but then it started coming my way, so that I find it hard for me to single out any particular game. I was simply playing each game for the win, that’s all.

- Not every female player was fighting in the junior section, rather opting for their age groups.  What about you?

- I decided to face a tougher challenge. Last year they did not invite me into the U21 group as I did not qualify by rating; therefore, I was in the U19 group. I ended up first there as well. 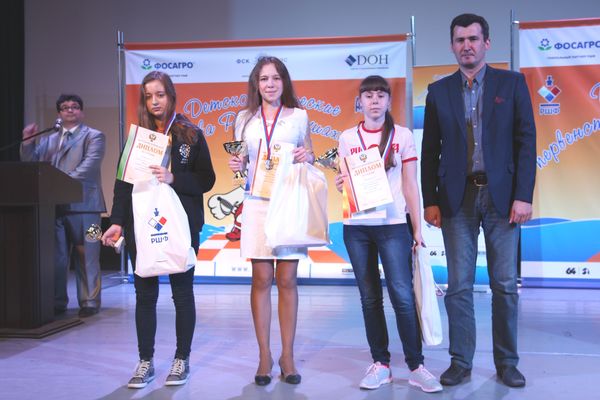 Aleksandra Maltsevskaya (3), Daria Khokhlova (2) and Margarita Potapova (the champion) at the awarding ceremony

- When did you start taking chess classes?

- It happened absolutely unintentionally when I was five! I was taking English and dance classes, and there was a time gap in between. As it was not convenient to go home, I needed something to fill in the gap. This is when my grandma came across a poster inviting to enroll into a chess club.

- That is, your family has had no chess history prior to your taking it up?

- Indeed, there used to be none playing chess. The chess club, as well as dance and English groups, was accommodated with the Pioneer Palace of the Kerch city.

- Please tell us about your native city.

Kerch is a hero city. Besides, the referendum has turned it into the most ancient city of Russia! Kerch is as old as twenty six centuries! In the meanwhile, the place has known many names: Panticapaeum (Greek), Korchev, Bospor. The Greeks, Scythians, Romans, and Turks were among those fighting for its possession. It stands between two seas, after all!

- Who was your coach in the Pioneer Palace?

– That many? How did you manage to do that?

– The Ukrainian junior championships feature its own system of semifinals and a final. They are scheduled at different times. Within a span of a year one can qualify through U12, U14, U16 and other semifinal groups and then play in all related finals. This is how I pocketed so many event victories, them being in various age groups. I started off with the U8 group and went all the way up to U14, which happened in 2014. Beginning with 2008 I have been coached and greatly assisted by Oksana Igorevna.  It has been for as long as 10 years now.

- Do you mean Oksana Gritsayeva, the many-time participant of the Russian Superfinals?

(– It is she who has contributed so much into Margarita’s success! – was added heatedly by the champion’s mother and grandmother.)

Margarita Potapova- Indeed, we even moved to Feodosia and rented a flat for a year so as to be able to study chess with Oksana. Then we moved back to Kerch for family reasons and visited Oksana Igorevna’s training sessions afterwards. Now we have Skype to put us together at any time needed.

Tatiana Potapova- Margarita scored 9/9 at the U8 Ukrainian championship, and Oksana Igorevna was there with her students. When Igor Viktorovich advised us to recruit a stronger coach, I contacted the Crimean Chess Federation about her phone number.

- During the last year’s Higher League Oksana seemed to be more emotional about your game than her own!

Margarita Potapova- She said that concentrating on her own game went easier for her than watching mine. Thanks to Oksana Igorevna’s assistance, the evaluation of the ultimate round game’s opening was +2 for me; however, my opponent was putting up fierce resistance, while I failed to find a clear-cut winning plan. I offered a draw as this result was sufficient to seal first. Oksana Igorevna and I were preparing for each game. We analyzed opponents’ games and went through various opening lines.

Tatiana Potapova – Being a sportswoman and beauty girl, she is a very good psychologist who knows to feel Margarita's mood and build up her confidence. She is excellent at table tennis and cuesports. She is a many-time prize taker and winner of men’s cue sports tournaments. 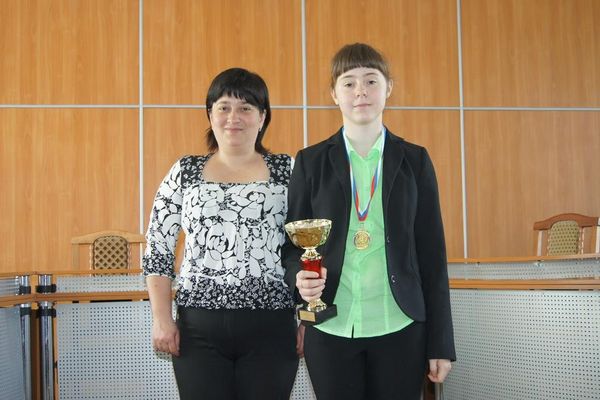 – By the way, what about chess in your region? Do you find support with the local authorities?

Tatiana Potapova - Margarita is a three-time men’s champion of the city. However, the chess life of Kerch, with neither financing nor a chess club of its own, is far from a smooth one.  Unfortunately, Rita has almost never been paid to go to tournaments. They would sometimes reimburse your travel expenses or an individual tournament, but you are overwhelmingly on your own, after all.

Margarita Potapova - Once Sergey Aslanovich invited Oksana Igorevna and me to attend the training session run by the school named after Vitaly Tseshkovsky. In addition to chess classes with leading grandmasters, we were enjoying rest time activities, such as swimming in the pool, playing tennis and football, even doing physical morning exercises.

- You are in for USE and entry exams soon, right?

Tatiana Potapova - Yes, I need to take the Russian and Math exams. There are only two exams for me now, but this is the last year the Crimea is not subject to other exams. The Crimean and mainland Russia’s scholastic curricula are not uniform yet. When entering the university, the natives of the Crimea take an internal exam.

- What about scholastic chess centers, by the way? Do you attend training sessions organized by any of the RCF grandmaster schools?

Margarita Potapova - Four times a year I attend the Togliatti grandmaster center’s training sessions guided by Yuri Rafailovich Yakovich. Sometimes training sessions overlap with tournaments, but I try not to miss the former. The program is very interesting and features tests, lectures, playing out of various positions and physical training. We are coached by famous grandmasters, and the coaching lineup is very strong in general.

– How did you come to know Yuri Yakovich?

– When I made my debut in the Russian children's championship and took second in the First League, Yuri Rafailovich invited me. I have been part of it ever since and I'm very grateful to the school. 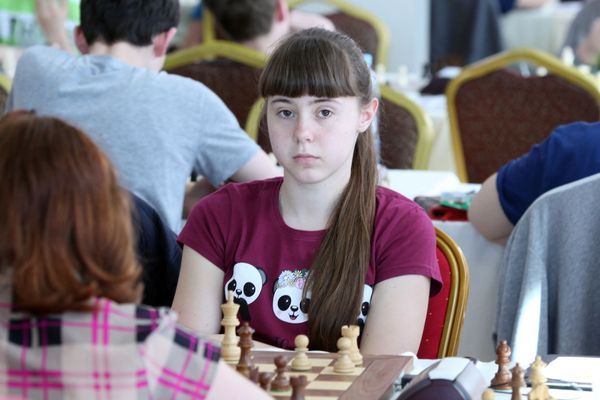 - As far as I understand, you could not take part in the world championship on two occasions because of a visa problem, so well known to the natives of the Crimea. What was last year’s situation?

- Last year I was able to take part in the World Championship, where I finished eighth. Uruguay is a visa-free country. However, the tournament organization left much to be desired – they confined us to spaghetti and water; besides, 100$ was stolen from my room...Not much in the way of positive impressions!

- What events are you up to now?

- We planned to take part in the amateur chess tournament in Minsk, but now I am qualified for the Higher League of the Russian Women's Championship. This is where my coach and I will go. I will do my best, but I also hope that Oksana Igorevna will qualify into the Superfinal yet another time!

- I wish good luck to both of you!