“Does it really take no time to organize a World Championship?” All my friends looked genuinely surprised after I told them that the tournament was had been passed from Saudi Arabia to Russia and must be held until the end of the year.

Organizing the FIFA World Cup took seven and a half years. For the World Chess Championships Russia had two weeks and a half. Luckily we did not need to build another stadium – the Manege exhibition hall located in the heart of St. Petersburg proved a perfect spot for intellectual battles. Normally it hosts art exhibitions and antique displays, however, they had some experience with chess as well. Last summer an exhibition game of living chess between the former World Champion Anatoly Karpov and multiple-time Russian champion Peter Svidler was planned in the Manege. Alas, it the dates did not work out for the grandmasters, so they were eventually substituted by computer engines. The living pieces remained living, though. It would be fitting to replace them with robots as well, however, I only heard about one Russian-born chess robot, but the trace of it was lost somewhere around Yaroslavl.

The acting Governor of St. Petersburg Alexander Beglov told us everything about chess traditions of Leningrad and Saint Petersburg in his flamboyant speech at the opening ceremony. His total recall included the Chess Mountain in Peterhof, chess coutryard near the Five Corners Square, and the living chess match on the Palace Square (which was called Uritsky Square back then) in 1924. Army was White in that match, and Navy was Black. All the pieces were mounted; wrapping his speech up, the Governor supposed that modern grandmasters will also entertain us with “horsey moves”. 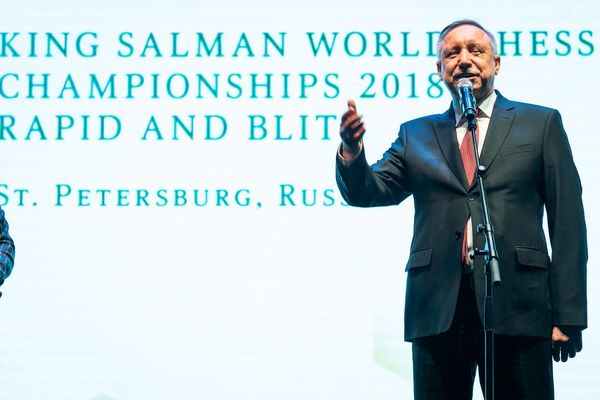 It is a first World Rapid and Blitz Championship organized by two countries – Russia and Saudi Arabia. This caused a certain restriction the FIDE President Arkady Dvorkovich reminded us of: no alcohol or pork in the tournament area. There is also a certain dress code – the players are not allowed to come in jeans and sporting shoes. However, even when they do, nobody shouts at them or sends them home.

The organizers were operating under the heavy time pressure but managed to do everything – accommodate all the participants, carry out a colorful opening ceremony, prepare the playing hall and broadcasting in three languages – English, Russian, and Spanish. Frankly speaking, I cannot recall any official Spanish broadcasting at the FIDE tournaments. It has great potential, considering the popularity of chess in Spain and Latin America. The playing hall located on the first floor is very spacious and bright, the players have more than enough elbow room. One could even easily walk around between the tables, if the time control wasn't this demanding.

A huge area for spectators is located on the ground floor. Guests can listen to live commentary (Sergey Shipov in Russian, Peter Leko and Evgeny Miroshnichenko in English), read chess literature, visit a bookstore or cafe, or simply play chess.

The chess automaton designed by Konstantin Kosteniuk, father of the former World Champion, gathers huge crowds, as always. The machine happily plays on three boards simultaneously and crushes everyone regardless of their ratings or titles. Hikaru Nakamura tested himself yesterday, but was defeated. Only the happy newly-wed Rauf Mamedov found the Achilles' heel of the machine: he created a fortress with a rook and two pawns against a queen, and mercilessly flagged the opponent. 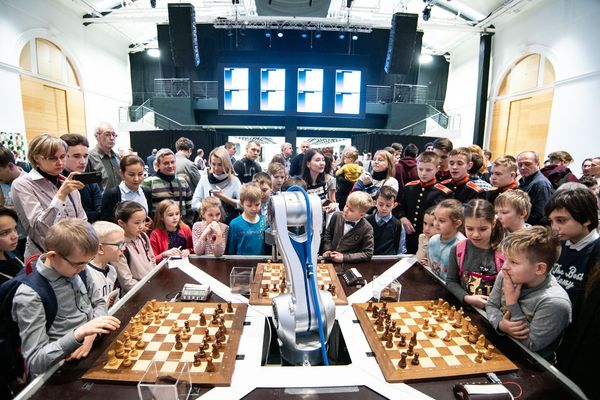 The side events started even before the championship itself. Grandmasters Al Modiahki, Zarnicki, Miroshnichenko, Zagrebelny, Lugovoi, and Ionov gave a simul for 120 local players. The exhibition of the RCF Chess Museum was also opened on the first day. The historian Dr. Dmitry Oleinikov conducted an excursion for guests of the championship. And Oleg Pervakov, three-time World Champion in chess composition, one of the greatest chess composers of all times, carried out a brilliant master call in his department. 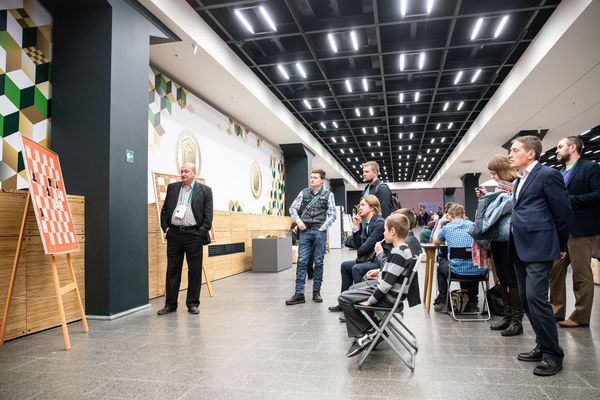 So, being in Manege is exciting and fun for the spectators, and, last but not least, is absolutely free. The chess feast will go on until December 30. Come, and you will not regret it!