In Style of Yuri Razuvaev or in Spirit of Mikhail Tal?

I have read a great story on Facebook about the reverse side of wearing masks. It was about Latvia hosting a rapid chess tournament dedicated to the memory of Vsevolod Dudzinskis, first coach GM Arthur Neiksans. Arthur himself went to the starting line and after the second round he suddenly spotted a familiar face in the hall. It turned out that one of the tables was occupied by a man in a mask whose facial moles resembled those of the disqualified Igors Rausis! However, Rausis was not on the starting list… Disqualified from chess for 6 years, the player was listed in the starting list under the new name of Isa Kassimi! Following emotional investigation, he had to abandon the competition.

Russian chess folklore tells a popular story about how a GM took a student along to a European tournament. It so happened that this GM's trainee did not feel well and could not show up for the most crucial game. Then the coach, a very responsible person, decided to show up instead. When the game began, the opponent was at first stealing suspicious looks at his counterpart, and then brought himself to whispering desperately, "You are not Vladimir... You are Grandmaster D.!!!" Now imagine them playing in masks! Indeed, have chess federations and organizations defined a mechanism for identifying players? You wouldn't usually know everyone in person, much less so that this person’s face is only half open…

Going into round three, they announced to the Higher League participants about introducing prizes named after Yuri Razuvaev, who would have turned 75 on October 10. To the best of my memory, the last time the Higher League awarded creative prizes was in 2012 in Tyumen, and it's great to see this tradition revived. Excerpts from the book Chess Academician – Yuri Razuvaev are published on the СFR website, but I want to share a story that has not made it into the book. After all, the book looks like a kind of gospel whose gilded pages miss all earthly events.

Well, it is the year 1993 with the World Team Championship in Lucerne looming large on the horizon. The Soviet Union has broken up, FIDE is falling apart, and RCF, too, is being torn apart between supporters of Kasparov and Karpov. By that time, the feud for the RCF sees Karpov's supporters seizing the initiative and forcing resignation of Kasparov's protege Arkady Murashov, who is also head of the Moscow Main Internal Affairs Directorate. Therefore, one of Garry Kimovich's coaches, Sergey Makarychev, who had coached the team at the 1992 Olympiad and the 1992 European Championship, could no longer keep up this job for obvious reasons. And they ended up choosing Razuvaev – the most neutral and democratic figure that suited everyone.

Kasparov was absent, and Karpov ignored the competition as well. However, the Russians' lineup with Kramnik, Khalifman, Bareev, Dolmatov, Dreev, and the late genius of the blitz Vyzhmanavin still looked clear favorites.

Since 1952, the Soviet and then the Russian teams had taken absolutely all Olympiads, world and European Team Championships. The only exception was Buenos Aires in 1978, where the Hungarians, led by Portish, pulled off a miracle and managed to get ahead of the invincible red machine. Therefore, fans and new administration of the Federation headed by Evgeny Bebchuk had high expectations from the Lucerne event, but those high expectations fell flat. The team quickly ceded its leading position and ended up third as a result. As opposed to this, the competitor teams of the USA and Ukraine with Gata Kamsky and Vasily Ivanchuk on board one respectively, were on the roll and raced to the finish line at full speed. In the last round, the Russians were stopped by the Latvians – Alexey Shirov defeated Vladimir Kramnik, and the match was saved only by Alexey Dreev, who came back against the above-mentioned Rausis over a lengthy fight that lasted into an abandoned hall.

Razuvaev did his best to shield his trainees to the extent that when Russia lost to Iceland in round three, he even refused to talk with Bebchuk over the phone. Needless to say, he could no longer dodge this bullet on his return home. There took place public "execution" in Moscow during which this failure was rated against all past achievements and which resulted in Yuri Sergeevich's removal from his coaching position. Back then even the second place was considered an outstanding failure, let along the third…

And here is what I hold most dear about Razuvaev. This blow did not embitter Yuri Sergeevich's heart, and he never ceased to be his usual wonderful self. Meanwhile, being already at the peak of his coaching career with Sasha Kosteniuk's victory in the World Cup and having Evgeny Tomashevsky as his trainee who was already a member of the national team, he never allowed himself any remarks about Lucerne and was never willing to settle scores with his adversaries.

Anyway, let's go back to the playing hall of the wonderful Grand Hotel Zhemchuzhina. The women's section is usually known to produce some high-profile sensations every year. An unknown back then Anastasia Protopopova reached the Super Final in 2018, and a season later Zarina Shafigullina followed in her footsteps. This said, the next sensation is about to come into the limelight in the person of Higher League first-timer Yulia Grigorieva from Bashkortostan who has successfully defeated Evgenija Ovod, Daria Voit, and Dina Belenkaya! 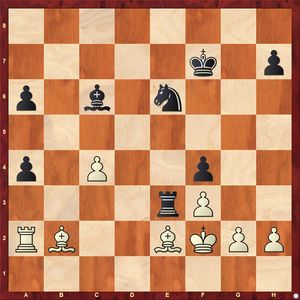 In time pressure, Dina tried to force simplifications, but committed a mistake.

It was necessary to urgently transpose into the opposite-colored bishop ending via 38.Ke1 Ng5 39.Ra3, and now Grigorieva wins material.

Valentina Gunina has also scooped 3 out of 3. Keeping a close eye in the yesterday's stream over their national teammate rapidly improving her position and gaining back rating points together with Roman Ovechkin were Natalija Pogonina and Olga Girya. 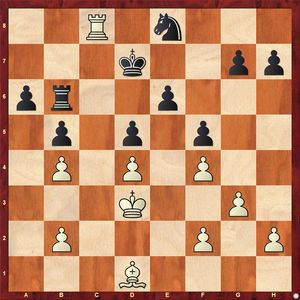 In an interview with Eteri Kublashvili, Valentina admitted that she studied chess during the entire quarantine period. Her performance is a clear testimony of her efforts. There is no trace left of her former over-confidence the success of many sacrifices. We see a clear and consistent performance that we can trace back to Gunina's becoming the national champion for the first time. Suffice it to look at the textbook conversion over Mariya Yakimova.

This is not a glaring inaccuracy. White has weak pawns b4 and d4, and the bishop has no prospects. Therefore, she should have kept the rook active via 43.Ra8=.

Now Black can carry out a plan that features the following steps. She first needs to burden the white king with having to defend the weak pawns and then open the second front. As simple as that. I mean easy for Gunina.

The first part of the plan is completed, and the white rook and king are still out of play. 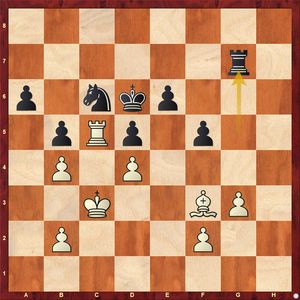 Because White cannot mark the time – 57.Be2 Rh7, Yakimova tries to activate the bishop, only to have it trapped too!

The bishop is trapped!

The contest at the top of the standings is surely not confined to the battle between Grigorieva and Gunina only. Marina Guseva is half a point behind, and the fight on other boards continues as well. 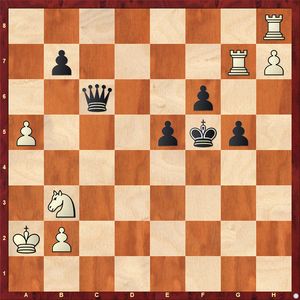 60.R:g5+! would have finished in style! You can't take the rook, and otherwise this heavy piece will safeguard her king against perpetual check.

64...Qe4+!= Black erred in time pressure and gave White yet another opportunity which Solozhenkina failed to exploit.

In the open section with 2.5 points out of 3 are Alexander Rakhmanov, Alexey Goganov, Pavel Ponkratov, Mikhail Antipov, Maxim Chigaev, and Vladimir Fedoseev. 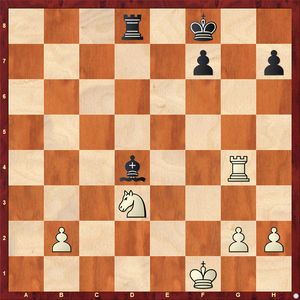 Can White really grind out a victory in this ending? Despite the reduced material, Black's compromised pawn structure is also a factor in this position.

Black could have kept the minor pieces instead via 30...h5 31.Re4 Bb6, hoping to sac the bishop at the right moment, but Ivan Rozum decided to transpose into the rook ending known for its drawish tendency. There is an interesting psychological background to this decision. The thing is, Alexander Valeryevich Khalifman writes a book dedicated rook endings, which connoisseurs say will outperform the works by Averbach, Portisch and all other predecessors put together. When it came to discussing rook endings on Facebook, Volodya always joined the discussion by claiming that "This position is good enough for the book that Boss has in mind!” Besides, he has recently contributed with many of own examples for Khalifman's manual. 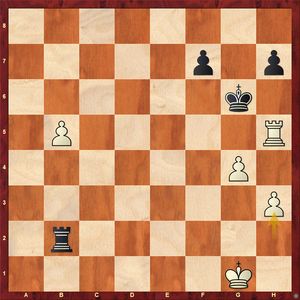 This is a classical treatment of the position. Fedoseev has consolidated his position and freed the white king to run to the queenside. However, Rozum destroys White's ideal position in an exemplary manner.

41...Kg5 42.Kc2 Rg2+ 43.Kb3 Rg3+ looks like a draw because the white king cannot cross the 4th rank without dropping the g4-pawn with check. Black's error in withdrawing is that his king will no longer be capable of supporting the h-passed pawn's advance. 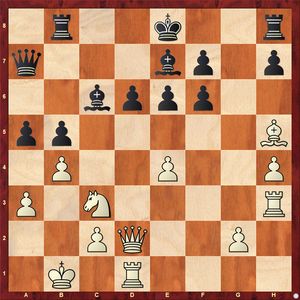 "What on earth is going on?! Alexander Riazantsev's opting for Rauzer is quite unheard of. On one of the Moscow forums, they wondered as to what had kept him away from his usual choice of Caro-Kann or French defenses.  Little doubt that the choice of Rauzer is probably the influence of Daniil Dubov! Antipov took up the challenge in his trademark style and performed as though instead of 2020 it were the 1950s and him being Mikhail Tal who had come to conquer Moscow. The opening has shaped in Black's favor, and White makes an attempt to turn the tables in a forced manner.

This is an excellent rejoinder: the bishop doubles on e4 by protecting the king and contributing to the counterattack.

Alexander's decision to anticipate the time control with checks is self-explanatory. 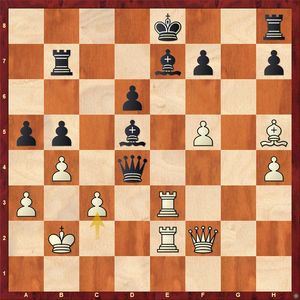 Let's give a high five to beautiful ladies' performance in the men's tournament. Aleksandra Goryachkina negotiates the distance so superbly that neither the mighty filibuster Pavel Ponkratov nor the former Trans-Siberian and now the Kazan steamroller Vladislav Artemiev could do anything to defeat her. Having defeated the senior coach of the youth team in beautiful style, Polina Shuvalova has also joined the +1 group. 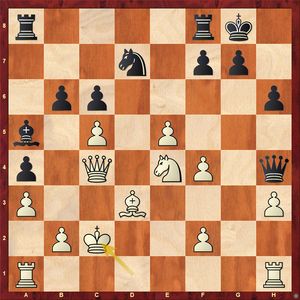 This last-ditch attempt could be met with a cynical 27.Bf1, but Shuvalova did not miss the opportunity to finish beautifully.

Things have so far not gone well for the 2018 Higher League winner and twice super finalist Alexey Sarana. Sarana has won countless quarantine tournaments and matches on the Internet, but the Sochi soil keeps haunting him with unfortunate slips. 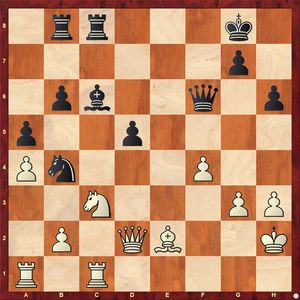 White is slightly worse and should have therefore limited himself to the precise 37.Nb5 or 37.Na2, but the rook has abandoned the crucial file.

Let me add that the last qualification into the Higher League – the Ural Federal District championship – ended only a few days. Ilya Iljiushenok and his teammates finished the tournament, took COVID tests, and jumped on a plane to enter a new battle front. They do love chess in the Urals, after all. Given the marathon distance that Ilya has to cover repeatedly, I ask you to go easy on his next game. 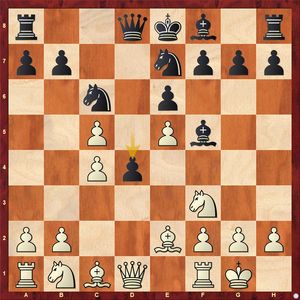 But Ilya got something wrong and moved his queen elsewhere.

Now Black's idea pans out completely. In the case of 10.Rd1 d3 11.Be3 Be7 12.B:d3 B:d3 13.Qb3 Ng:e5 Black gets a strong pawn in the center and manages to complete development. On the other hand, the text is even worse for Whites as it undermines his structure on the queenside. 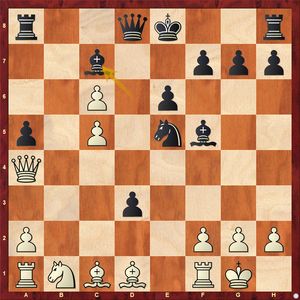 Black is clearly better after 17.Bb2 0–0, but then the game would not have made it into this report! White's emotional reaction allowed Alexandr Predke to create a cute miniature.

18.Bf4 Rb8 gives White no safety. White's pieces are way too misplaced to protect the king.

See you again in two days after the weekend!