Elena Tomilova: Being Happy Every Day, and Your Way is All That Matters!

– Please accept my congratulations on your success! Let us start from afar by telling us about your first steps in chess.

– Thank you! I was born in Pyatigorsk. I mastered the rules of chess at the age of seven virtually by chance. When I started school, chess was one of the study groups to choose from the additional afterschool program. Teaching chess there was Victor Aleksandrovich Skorchenko (grandmaster Dmitry Skorchenko’s father), who invited me to take up chess classes with the Enthusiastclub. Your first coach is known to make a big difference in any type of sport. When I grew up, I went to study chess with Alexander Viktorovich Potapov, and then with the strongest Stavropol grandmaster Alexander Lastin.

– Did you have any success at chess?

– Yes, I took third on two occasions and once finished second at the Russian Junior championships, and in 2005 I ended up sharing to qualify from the U19 group of the Russian Championship Higher League, but was edged out into the sixth place by additional tie-breakers. As ill luck would have it, none of the national team members would refuse from participating back then.

– And then you moved to Rostov, right?

– Then I entered the University of Civil Engineering in Rostov-on-Don and got into the group headed by a good coach, international master Alexander Ivanovich Zakharov (who had experience collaborating with Ekaterina Kovalevskaya, Maxim Turov, and my future husband Dima Kryakvin), but I was still far from claiming the title of his favorite student. Rostov-on-Don fared way better against the Stavropol Krai in terms of financing, which enabled me to participate in more events, inclusive of the open tournaments.  I was also assisted by V.M. Kantsyn, an eternal head of the Rostov club Elephant. I thank him greatly for his faith in us and wise pieces of counsel that helped us out in various situations.

The year 2009 marked a milestone event of my life as I married GM Dmitry Kryakvin. This is great to have near you a person that understands, loves and supports you. A chess family is double that much. Such families have increased in number as of recently. This wonderful tendency cannot but make you happy! On May 1, 2012, our son Andrey was born, who is now also interested in chess and taking his first steps in sport. 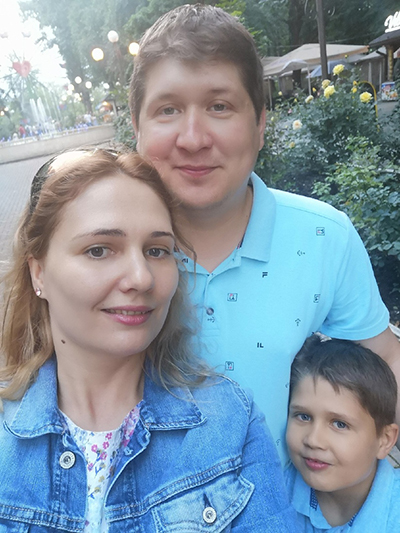 The chess family in full


– There followed a period of time when you and your husband flew the banner of the Tyumen team, didn’t you?

– From 2013 to 2017 we lived in Tyumen as there had opened a chess center there (now a school) named after Anatoly Karpov, and after a while my husband was invited to work there. Tyumen is known for rich chess traditions and there take place many tournaments. There we met such wonderful people as president of the Tyumen Chess Federation G.Y. Shanturov, grandmasters Evgeny Prokopchuk and Sergey Iskusnyh.

While in Tyumen, Dima collaborated with many promising chess players, standing out among whom is a strong active grandmaster Daniil Yuffa - his father Alexander Yakovlevich also used to assist us in many ways. GM Roman Ovechkin, also a coach of the Karpov center, charged me with his optimism and played many blitz games with me. It is thanks to his training that I went on to win bronze at the 2016 Russian Blitz Championship despite facing the country's strongest chess field.

It was a good period of life when we worked hard to achieve our goal and also had time to take vacation every summer to bask in the sun. Back then our top priority was to address our problem of lack of accommodation to live in, which we eventually coped with with colors flying. We bought residential property in Rostov that we had to return to for family reasons.

– 2015 proved a turning point of my life as there passed away two people very dear to me - Alexander Lastin and my mother. It was perhaps at that moment that the brevity of human life stood out clearly to me, and I made up my mind to go on doing what I love and what makes me happy most of all. And this, of course, is studying chess and playing in tournaments. It also allowed me to develop a calm philosophical attitude to defeats. I managed to play some good games, to achieve certain success even if of local scale.

– It is your second achievement in a row that you qualify into the Superfinal from the Higher League taking place in Yaroslavl, isn’t it?

– No detail is too small for such an event as the Higher League. In Yaroslavl I like the hotel, the playing hall, the spa area, and a good shopping center opposite the hotel. 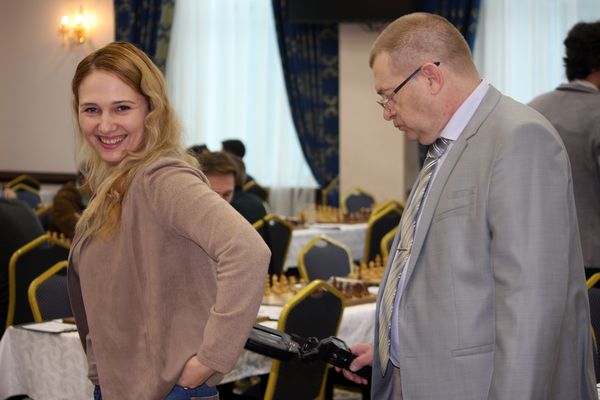 Even the anti-cheating test would fail to upset the leader

– Did your home people root for you?

– It goes without saying that there would have been no success like this without your relatives and close people supporting you. Family is the most valuable asset in anyone's life. I am very grateful to my dad for supporting and believing in me, for helping me take care of my son Andrey. It allows me to focus on the tournament play and preparation almost exclusively. It is not even every day that I call home, knowing they are fine with my father taking care of my son.

Yet another pleasant surprise for me was presence of my relatives in Yaroslavl, who gave us a wonderful rest day by driving us around the place, taking us on a tour of Kremlin, as well as by treating us to a dinner in an excellent restaurant in which I partook of a crab soup for the first time in my life. I also thank my husband/coach and my sparring partner, and otherwise all those rooting and supporting me and encouraging me with cordial words both before and during the tournament. Special thanks belong to Roman Ovechkin and Darya Trapeznikova as they were in charge of the tournament broadcast. When the game was over, I would often watch them commenting, noting for myself whether or not our thoughts and ideas were in alignment. It's a pleasure going over the comments of fans, even sent by those I do not know in person. I read them all as they came in and I am absolutely normal with criticism or irony against me. I have no problems with a sense of humor.

– Do you do a lot of homework?

– It is as natural for me as breathing air. I cannot go without chess for more than a couple of days. I read books, solve puzzles, and go over the games played. I like it most when they say, “I have an idea in this opening, let me show it to you!”

Besides chess, I also enjoy such sports as swimming, fitness and massage, the latter being a mandatory part of the preparation. Lack of physical activities will bring to naught any success expectations that one might harbor. I adore basketball and am a fan of the BK Rostov-Don SFedU team, No.5 of which is my brother's fiancee Irina Miroshnikova. My family would often go to see the matches live: me, Andrey, dad, Dima (if he is not busy training or doing something else for the RCF website). This year's saw “The Panthers” win the Russian Championship Super League final.

I enjoy Heroes of Might and Magic III as an emotional discharge. However, I only play the classical edition and not against human players. 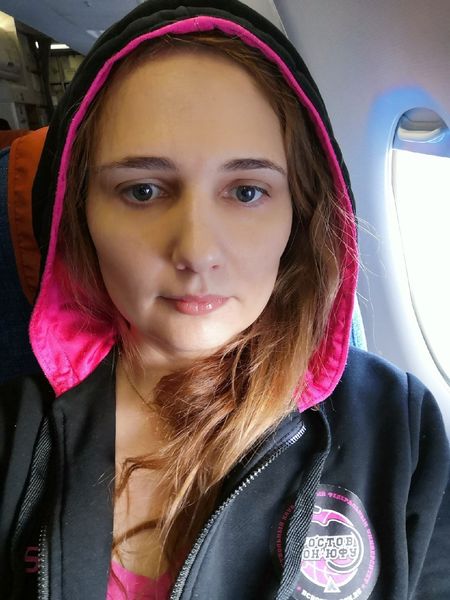 – The last round in Yaroslavl saw you and Galliamova decide against crossing swords.

– There were many people asking me questions about a quick draw with Galliamova. It was not a prearranged result, but it was rather my fault of choosing a wrong move order in the Slav Defence and deciding against taking any risks for that matter. Besides, it being my eighteenth game in a second tournament in a row, I felt tired. Having decided to leave things to chance, I was absolutely calm and happy to finish undefeated. Even if I had finished second, I would have taken it as is.

However, it so happened that Margarita Potapova had a good game against my rival Zarina Shafigullina. Rita was obviously extremely well prepared in the opening, her being the one doing her best to qualify for the Superfinal, and I congratulate her on having achieved that goal.

– Which game do you rank as decisive for you?

– It is hard to single out any particular game, it was a smooth event for me as I was trying to meet the needs of the position in each encounter. When converting against Ekaterina Kovalevskaya, I forgot to deliver a check and blundered my e3 passer just like that! Nevertheless, I managed to pull together and win the game because my superiority was huge. In the second round against Daria Voit there arose an interesting position right in the opening, and I managed to come up with a non-trivial idea of trying to trap the opponent's queen. I managed to take the initiative and believed the game would be over soon. However, having failed in time trouble to calculate the line that I intuitively considered to be winning, the situation escalated and became a mess. It was not easy, but when the situation calmed down my material superiority made a difference despite the bishops of opposite colors. 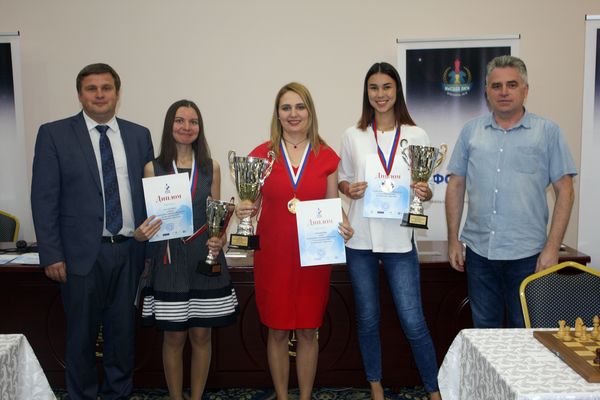 Prize winners D. Charochkina, E. Tomilova and Z. Shafigullina with the chief arbiter A. Moskvin and the Tournament Director A. Tkachev

– Can we say that your dream has come true now?

– You always need to be on the move towards a dream you set for yourself. On the other hand, there is a view that a man with a dream is subject to two upsets in that it either comes or not comes true. It is your way that matters. My position is to be happy every day. The rain is always followed by sunshine.