– Alexey, congratulations on your victory! Since your name as a Higher League’s triumphant might yet be ringing no bells with a wide circle of chess fans, please let us know more about your path in chess.

–Thank you! I started chess at the age of five. My elder brother used to play chess as well, but then lost interest. However, it is because of my brother that I went into chess. First success came quickly: second place in my age group at the Moscow Oblast championship at the age of seven, followed by first at the U8 Russian championship in Kostroma. It served an incentive for me to go deeper into chess.

–Who have been your coaches?

– My first coach was Sergey Anatolievich Smirnov, who worked with me until I turned eleven, and then I started working with Vladimir Sergeevich Belov. Our cooperation lasted into 2018, and now I study chess on my own mostly.

– How was the tournament unfolding for you? How many Higher Leagues have you been a participant of?

– My debut took place in 2016 in Kolomna, where I ended up scoring -1 (with 4 out of 9). I had absolutely no expectations back then, but had some gain to my rating points even with a dismay result like that. The final result suited me. I finished +2 in the Rosa Khutor event and also viewed it as a decent result. I was somewhat lucky in the ultimate round: even thought things were extremely grim-looking for me against Ponkratov, he blundered and went down quickly after.

This event had everything going smoothly for me. My first game was a confident draw against Inarkiev. Next game I defeated Dreev through my home prep.

– Do you mean you had the position with taking on f2 analyzed already? 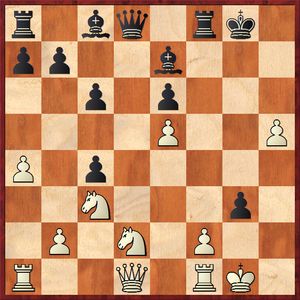 – It was on my computer up to move 20. From then on it is almost winning; besides, I had a lot more time than my opponent, and the conversion did not take much in the way of technique.

It was followed by the most complex of games against Kirill Alekseenko. Calculation went well for me in that game, and I sacrificed a pawn at one point. It was a successful decision that facilitated my further play to a considerable degree. As my opponent lost the thread of the game, I delivered a decisive punch (see reviews of rounds 2-3).

Denis Khismatullin was my next challenge. Going into the game, I was bracing myself for the sharpest Sicilian. However, he opted for the Berlin instead. I was neither ready nor versed in it at all. I decided to avoid sharp struggle, but the opponent went for it, choosing not the most correct line at that. I found all strongest moves at key moments and won the game (see reviews of rounds 4-5). 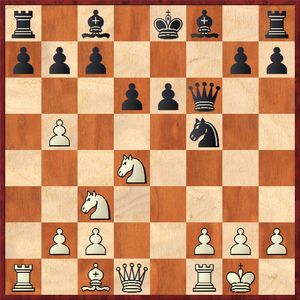 – Those were over-the-board decisions indeed. My next opponent was Artyom Timofeev. It was another instance of being caught off guard as Timofeev had never employed Berlin before! This time I decided to act in a different fashion, thinking it would be a calm draw after all. My winning the game was due to the 40-move rule. Otherwise, there would be a great temptation to agree to a draw, but the rules forbid it, and I continued making logical moves. As he created more weaknesses in his camp, it was already me playing for the win.

With only the light-squared bishops remaining on the board, all my pawns were placed on the opposite colored squares, but not so his pawns. As he was probably apprehensive of something (and, apparently, he should not have been), he carried out a pawn break, and Black’s position became untenable - I again managed to score a victory (see reviews of rounds 4-5). 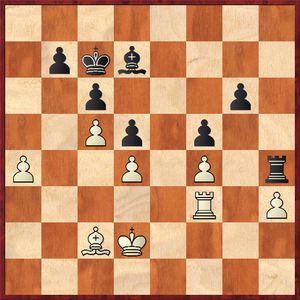 The Kazan grandmaster was defending meticulously, but then lashed out with 60...b6?, which allowed White to create a dangerous passer.

–And from then on it was just a matter of keeping the lead with careful play, wasn’t it?

– My start was successful, but also were the subsequent games. I employed the Philidor Defense against Alexander Motylev and had 45 minutes over my opponent out of the opening. I had used this line at the children's world championship, but the game did not make it into the database; therefore, my opponent was unaware of it. It was an extremely complex position in which I had so many extra minutes on my clock, and it was for the opponent to decide what to do and how to break through. As for me, I could simply mark time in that position. Motylev went somewhat astray in time trouble, missing out on the benefits of his position, but a draw always seemed a logical outcome. 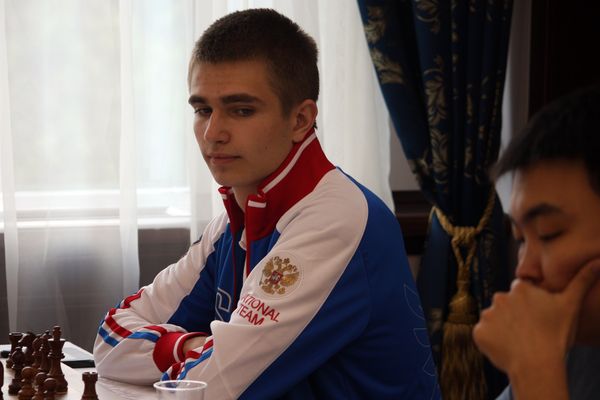 – How did it come to you to use Philidor against such an opening expert as Motylev?

– I should admit that the idea of using Philidor actually visited me 20 minutes before the game! The entire rest day, as well as the following one, was spent preparing for something else, but shortly before the game I realized that it was not the way to go... Besides, Motylev had employed the line as Black himself, so I think he knows exactly how to refute it!

–What about your draws in other games, did they lend themselves easier to you?

– I did not mind a draw against Zvjaginsev, trying to play as solid as possible. I was rock solid in French as White, and my opponent’s committing an inaccuracy enabled me playing for the win in a risk-free manner. However, his excellent defense left me with no opportunities of posing major problems. A quick draw with Oparin did, in fact, seal the deal for both players in terms of the Superfinal.

A draw in the ultimate round also suited me as probably landing me first.

– This is when you were pitted against Mikhail Kobalia, your former chief from the children's national team. Was it inconvenient for you in a certain way?

– I was rather pressurized by the significance of this encounter. I opted for an almost risk-free opening - the exchange variation of the Slav Defense. It is true, however, that the tension started building up at some point because of my undermining play for the draw. Nevertheless, it ended nicely for me as the game quickly transposed into a drawn pawn ending.

–How was the tournament organized, in your opinion?

– The hotel is simply magnificent! I had much lower expectations going into the event. What we had was an excellent quality/price combination. I also liked how it was organized; this time we were given more room between adjacent boards if compared to the previous year’s event, but it was freezing at times. Day one had me wearing only a T-shirt, and I felt like freezing. It occurred again in one of the subsequent rounds.

– What is the secret of Alexey Saran’s rapid success? All in all, it is the latest couple of years you have seen you so successful.

– I have just grown up. Certain things that the coach tried to drive home in 2015-2016, had a different effect on me in 2017-2018. I have learned to work by myself and overhauled my opening preparation substantially. It has allowed me to outplay Dreev and emerge with decent positions out of all other games.

- And how was the situation unfolding in China, where you finished best in the classical part of the match against representatives of the Celestial Empire?

– It was funny how we got there. It took us 8 hours to travel through China itself. We got into a traffic jam, which cost us two hours. After 500m we had to stop for yet another hour. Meanwhile, people riding a super-high-speed train from the Chinese league negotiated about 2000 km in just 5 hours.  As for us, it took us 8 hours to cover a distance of 300km.

However, the hotel we were accommodated with upon arrival is simply gorgeous. The food is specific and not to my liking, but this is another country, after all! I got off to an uninspiring start in blitz. Then luck sided with me as I won the first classical game. It helped regain confidence, and the play started going my way. Luck sided with me in yet another game as my Chinese opponent failed to win an absolutely winning position. I put down my excellent result to a streak of luck mostly. 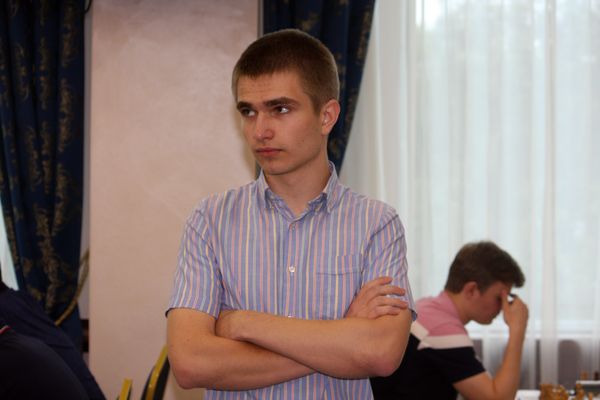 – Do you feel like excelling more in classical or rapid chess?

– I am no longer sure now! I do well in blitz and rapid, but being serious about these events sometimes leaves much to be desired. I have had no serious achievements in the Grand Prix rapid.

– Does it feel like a challenge to play the Chinese? Is there anything specific about the way they play chess? There are not a few players who would rather face anybody but the Chinese or the Hindu!

– There was nothing that struck me as differing much from us. It is not to be ruled out that the Asian players’ ratings are somewhat lower than they should be. However, this is the case for players rated up to 2400. An important point is that average Chinese players have limited amount of games in the databases, which stands in the way of preparing for them. Nothing struck me as specific in the way they play chess. I was faced off with both the Chinese and the Hindu at the latest Aeroflot. It went terrible for me, but I managed to come back in the match.

– Travelling takes up a lot of your time. How do you catch up with your scholastic commitments?

– This year I changed high schools in favor of the Ural Mining University. Before that I was studying at the Russian State University of Physical Education, Sport, Youth and Tourism, which was taking up too much of my time though. It is a totally different story with the Ural Mining University. I have got free time to practice chess and it immediately produced the desired results - I have won the Taganrog event and qualified into the World Cup and the Superfinal.

– You are also a member of the ProfChessClub, right?

– The club also helps me by sponsoring my chess trips and backing me up in various ways. As a result, they recognize me and send me to competitions.

– What piece of advice would Alexey Sarana would give to young chess players that keep track of his achievements?

– To study chess and not lose courage if something goes wrong for you! Sometimes you feel like there is no progress, but if you persist, success is bound to come anyway. I used to be one lacking any progress during a period of two years, but as I kept working on chess the breakthrough did take place after all! 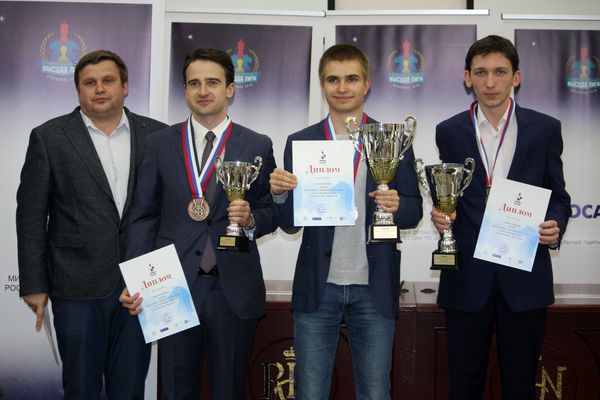