Sochi Gives Start to Round One of the World Cup

FIDE President A. Dvorkovich made the symbolic first move. 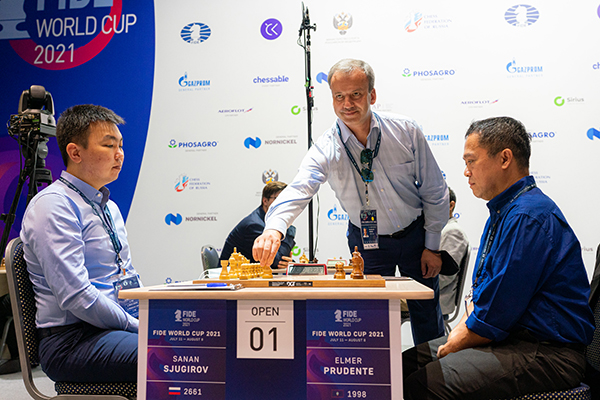 July 12, they played round one games of the FIDE Open World Cup and the FIDE Women's World Cup in Sochi. Both events run to the knockout system. Round one lists 156 male and 78 female participants; the rules pair them to play mini-matches of two games with classical time control (July 12 and 13). If the matchups end in a 1:1 draw, a tie-break will take place on July 14 with more games featuring a shorter time control. In round two of July 15 as many as 50 strongest male grandmasters, led by the world champion Magnus Carlsen in the Open World Cup, and 25 strongest female players in the Women's World Cup, are to join the round one winners. All in all, representatives of 87 countries participate in the competition.

FIDE President Arkady Dvorkovich made the symbolic first move in the match S. Sjugirov (Russia) — E. Prudente (Guam). Chief Arbiter Laurent Freud (France) asked the participants to refuse from the traditional handshake before the game for safety reasons. Some players greet their opponents with a nod, while others touch their opponent's fist with their own.

Abhimanyu Mishra (USA) — Baadur Jobava (Georgia) stirred the audience’s anxiety on day one. It was only recently, June 30, at the age of 12 years, 4 months and 25 days, that an American boy (born February 5, 2009) made his last GM norm to go down in history as the youngest holder of the highest chess title. Abhimanyu Mishra — student of the 13th world champion Garry Kasparov — broke Sergey Karjakin's record, who became GM at the age of 12 years and 7 months in the year 2002. Meanwhile, his opponent, Baadur Jobava (born 1983), is an experienced GM, winner of major international tournaments.

Playing the white pieces, Abhimanyu Mishra did not back out of fight and launched a brave pawn offensive on the kingside. However, this would not discourage Baadur. The Georgian GM repelled the opponent's threats with precise preventive maneuvers to take the initiative over, win a pawn and launch his offensive on that part of the board where he was initially forced to defend. However, Jobava committed a mistake on the control move 40, upon which Abhimanyu could offer stubborn resistance and was close to saving the game. However, going into the sixth hour of play, the young chess player made a mistake and lost.

The talented Russian junior, a 15-year-old Volodar Murzin, was White against the Moldovan grandmaster Viorel Iordachescu. This game gave a hard time to the experienced player as he emerged down a pawn and a worse position out of the opening. It took more than five hours for the experienced GM to fight back from a very unpleasant position to salvage a half-point.

On Tuesday, July 14, return matches (with colors reversed) will take place in which unsuccessful players will try to come back. Each round starts at 15.00 (Moscow time).

The attached file shows the color of game one of round two for the "seeded" participants.