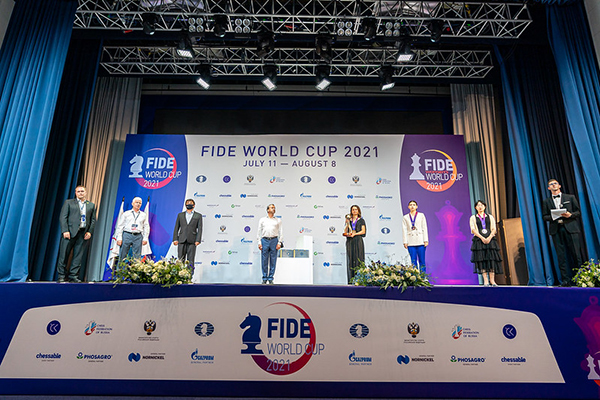 This prestigious competition’s winner is the 12th world champion Alexandra Kosteniuk, who defeated Aleksandra Goryachkina (both from Russia) in the final match. The third "bronze” place is with the ex-world champion Tan Zhongyi (China), who has outplayed Anna Muzychuk (Ukraine).

FIDE President Arkady Dvorkovich: “It felt a little scary to launch this tournament amidst the pandemic, of course. But now we see that the decision was absolutely correct. Hundred thousands of people enjoyed the over-the-board battles take place here in Sochi. We are grateful to our partners for their support in organizing this event. These partners are the Government of the Russian Federation, Government of the Krasnodar Krai, Sochi City Administration, Ministry of Sports of the Russian Federation, Chess Federation of Russia, as well as our commercial partners – Gazprom, Nornickel, PhosAgro, Chessable and Rosatom.

The final saw two wonderful chess players — Alexandra Kosteniuk and Aleksandra Goryachkina. We watched this fantastic battle with great interest. We thank our participants for this feast of chess. We thank everyone – arbiters, employees, technical staff and otherwise everyone involved who contributed to this tournament. I congratulate the winners and wish everyone good health, luck and more success to come."

Deputy Head of the City of Sochi Vladimir Morozov: “We are delighted that Krasnodar Krai, and in particular in the city of Sochi, has been home to such a big-scale international event. I am convinced that you have enjoyed and will never forget your time here in Sochi. Our city is always looking forward to sharing its sites for any competition, therefore we say: welcome!"

Mark Glukhovsky, CFR Executive Director: “This tournament has been a huge challenge both for the participants in terms of a marathon distance that they have covered, and for the organizers. We have tested some new, unorthodox methods of work during this tournament, which will certainly be employed in next year’s World Chess Olympiad. However, what matters is what happened on stage, in the playing hall. I want to express my admiration to everyone who has made it to the finish line — to both finalists and semi-finalists. It is a great joy to see you all play over real chessboards."

Laurent Freyd, Chief Arbiter, summed up the results and briefly recalled the course of the tournament. All participants received the award medals, and the winner, Alexandra Kosteniuk, also got a custom-made Cup.

In addition to main prizes, ROSATOM has prepared gifts for the winners – tea sets made of the legendary imperial porcelain.

When the award ceremony was over, FIDE President Arkady Dvorkovich declared the tournament closed.