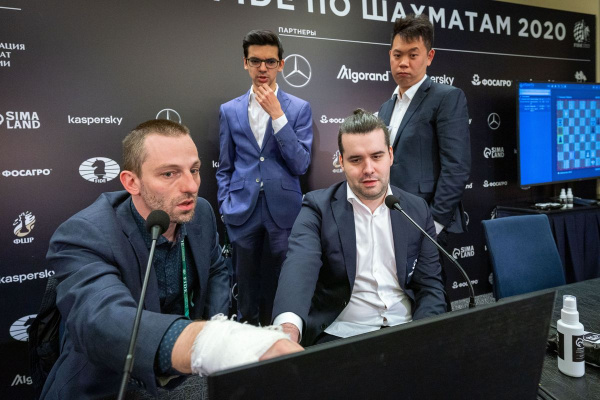 
The ninth rounds of the FIDE Candidate Tournament finished in Yekaterinburg. Anish Giri scored a win against Wang Hao. Alexander Grischuk took risks but could not beat the tournament leader Ian Nepomniachtchi. As a result, Nepo remains in first place by half a point.

In the Russian derby between Alexander Grischuk and Ian Nepomniachtchi, the main weapon of the leader of the tournament, the Grunfeld Defense was played in response to 1.d4. Alexander has prepared a surprise - a seemingly modest but poisonous continuation 9.h3!?, which has never been seen at a high level. On the next move, White sacrificed a pawn, giving his opponent a wide choice. It is clear that Grischuk analyzed the emerging complications at home, while Ian had to sort them out at the board. Ian accepted the sacrifice of a pawn but immediately offered to restore material balance, after which the position was simplified and equalized. Alexander did not like this development of events - after yesterday's defeat, he wanted to sharpen the game.

However, Ian acted solidly, and soon a calm ending appeared on the board. White tried to use a small space advantage and was not in a hurry to win back the sacrificed pawn. Nepomniachtchi successfully completed his development and tried to fight for the initiative. Grischuk could equalize the game in different ways, but, as Alexander said at a press conference, he decided at that moment to “play roulette” and went for the exchange sacrifice. Ian thought for a long time and refused to accept the “gift”. A series of exchanges followed and after White's 41st move the grandmasters agreed to a draw. According to the FIDE Candidates regulations, players have no right to start peace negotiations before the 40th move.

In the game between Anish Giri and Wang Hao, a classic version of the Catalan opening was played. White was putting a certain pressure on the opponent's position. Wang Hao was trying to defend himself creatively and even sent his queen to the a8 square. However, Black did not manage to create more or less serious counterplay. At a press conference after the end of the game, it became clear that the grandmasters differed in their assessment of the position: Giri believed that he had only a minimal advantage on his side, while Wang Hao did not see good continuations for himself.

According to an engine, the truth was somewhere in between, but pessimism played a cruel joke on the Chinese grandmaster. He carelessly weakened his kingside and soon found himself under an extremely unpleasant pin on the long diagonal. Later the Dutch grandmaster made a series of precise moves, shattered Black's defence and celebrated the victory on move 39.

Young Russian Grandmaster Kirill Alekseenko started the second part of the Candidates Tournament with two white games. As in the victorious game versus Grischuk, he chose the same move e4. Soon a calm position, typical for the Italian game, appeared on the board. In the old days, this variation was called Giuoco Piano, meaning a "calm play". However, Alekseenko did not agree with such an assessment of the situation and demonstrated an interesting preparation ready the sacrifice of two pawns.

The 2018 world championship challenger demonstrated a reasonable caution as he took only one of the pawns, and even returned that pawn to the opponent. Later at the press conference, Kirill admitted that he underestimated the move 14. ... c2. Fabiano was not even considering the capture on b2 - the position that arises in this case, similar to the Northern Gambit, seemed too dangerous to him. “I tried to stabilize the position; it looked dangerous for black, but white also had its own problems,” concluded Fabiano.

Alekseenko rushed to restore material equality but overlooked some tactics, thanks to which Caruana successfully regrouped his pieces. The American seized the initiative, but Kirill once again proved that he has a perfect feeling of dynamical resources of the position. He gave up both pawns on the queenside while activating his pieces. Caruana refused to repeat the moves first, but he simply had no enough resources to continue the fight. The grandmasters played almost to bare kings and agreed to a draw on move 59.

The most exciting opening duel happened in the game between Ding Liren and Maxime Vachier-Lagrave. French Grandmaster had to play two games at the start of the second half of the event with black pieces, and in both of them, he faced powerful home preparation of his opponents. Curiously, both Caruana and Ding Liren sacrificed a whole piece to the French grandmaster.

It is known that Maxime (same as Ian) likes to play the Gruenfeld Defense in response to 1.d4. But it didn’t come to that - as soon as Black played g6, White’s h pawn rushed to an assault: h2-h4!? This opening does not have an official name yet, but it has become quite popular in recent years, with a large influence that AlphaZero neural network made in chess.

Vachier-Lagrave chose a rather ambitious plan: he exchanged his king's bishop for a knight and placed his pawns on the dark squares, creating a powerful outpost for his knights on the central e5 square. Judging by the speed with which Ding Liren made his opening moves, this development did not come as a surprise to him. He spent only two minutes before sacrificing a knight, putting it under a direct attack of the enemy’s pawn.

Maxime accepted the sacrifice and immediately returned the extra material, trying to avoid falling under a crucial attack similar to the previous day. Still, Black's position remained consistently worse, since his king was exposed, while White had a two-bishop advantage and a space advantage.

After another inaccuracy, the position of Vachier-Lagrave became critical but it was the Chinese grandmaster who started to make mistakes. He rushed to move his defended passed pawn and eventually lost it. Maxime created counterplay with precise moves and saved half a point.

After the game Maxime Vachier-Lagrave gave his general assessment of the game: “I faced very big problems, my position was collapsing, and I was afraid that the game might end in two moves, but gradually I managed to get caught up in the struggle. I am glad that I managed to save half a point and stay in chances to win the tournament, but this game will definitely not end up in my best games collection. I hope my brain will click at some point and I will play a game I am proud of from the beginning to the end."

“I think I played a good game until I blundered 37… Re6 and then lost my passed pawn. Instead of 37.d6? I should have played, for example, 37.Rd2 and continued the fight for the victory," said Ding Liren.