Three Triangles in a Row

The Russian Championship Higher League crosses the midline The lead in men's section of the Championship is now shared by three players as David Paravyan and Mikhail Antipov have joined the recent sole leader Pavel Ponkratov.

Paravyan has delivered an instructive victory over Ivan Rozum.

A rare move. 6.Nxd4 is, of course, the strongest continuation, and 6...e5 is followed by lengthy theoretical mainlines.

The simpler 7...0–0 8.Bxd4 Bxd4 9.Qxd4 Nc6 gives Black an excellent position, but Paravyan has a different idea in mind!

This is too creative, in my opinion. 8.Bxd4 is a better move that gives equal play.

An original-looking but obviously an underwhelming decision because the fianchettoed queen does little to promote White’s cause. The position is still equal after the logical 12.Qa4. 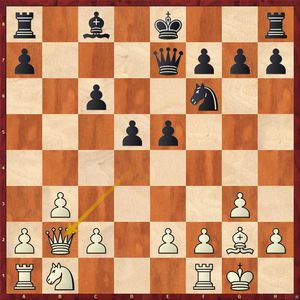 True to his style, Paravyan launches an attack as if out of thin air.

In the spirit of AlphaZero!

This is a blunder as the white bishop is at risk of staying out of the game for good.

White is clearly worse after 17.Bf1, but there is still no immediate follow-up of Black's offensive in sight.

A consistent and very committal decision. Black confines the bishop to h1 at a very high price of exposing the d4-square.

This is forced as otherwise White is virtually down a piece if no measures are taken against ...g5-g4.

There was no need to lash out like this. To mound the knight on d4 via 22.Nb5 looks natural. 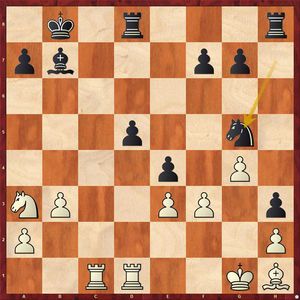 A blunder. Only 23.fxe4 dxe4 24.Nc4 was the way to stay in the game despite the obvious precariousness of White’s position.

Mikhail Antipov has outplayed the many-seasoned coach of the Russian team Alexander Motylev in his beloved Giuoco Piano.

A tricky order of moves from both partners has given rise to one of the key setups of the modern Giouoco Piano. 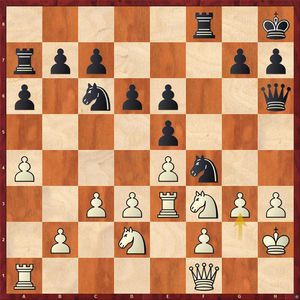 The knight retreat gives White all the time in the world to consolidate his kingside position and promote his queenside agenda as well. On realizing this, Motylev decides to give up material.

To cling to the piece via 22.Ng1 is too dangerous because after  22...f3 leaves White with virtually no moves to make.

Realizing the potential of his position, Motylev is not in a hurry to take back the pice and brings all his reserves to the theater of actions.

This is passive. The central breakthrough 23.d5 deserved attention.

Black acts consistently, but even stronger is 23...Rg6 to double up the rooks along the g-file.

Antipov gives back the piece only to revive his pieces. 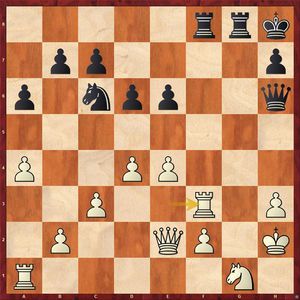 Black is fully compensated for the piece sacrificed, but the national coach loses the threat of the game.

The tough 27...e5! Is a much better move when 28.d5 suddenly runs into the very potent 28...Na5! – the black knight takes a detour to help his kingside fellows.

Now the 2020 Moscow champion consolidates his position in a confident manner.

The position has converted from a playable into a technically lost one for Black in a span of virtually two moves. Antipov was precise in pressing his advantage home in the struggle that followed

Chigaev vs. Ponkratov has caused a great stir and has not failed our expectations.

The nemesis of the Russian rapid tournaments has previously resorted to 6...Qc7 7.Qg4 f6 with quite decent statistics.

A rare but very poisonous continuation. 9.Qd1 b6 is the mainline and 9.h4 looks interesting. 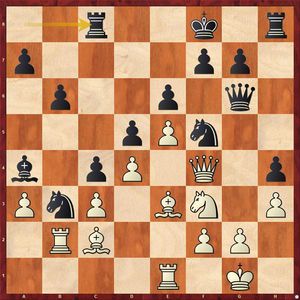 White has obviously outplayed his opponent and achieved a substantial edge, but here he got carried away with the tactical sequence.

23.Ng5 would have maintained an overwhelming edge with an intent to capture on f5 with the bishop and carry out е6. The pawn move g4 also deserves attention in certain lines.

It is this move that White must have overlooked in his calculations. The position is no longer clear.

It would be interesting to test the aftermath of 26...Nxd4 27.cxd4 fxg6 because to get rid of the white d4-bishop to create the potent c-passer looks too tempting.

White seems to be in the driver's seat and having a free hand to improve his position, but... 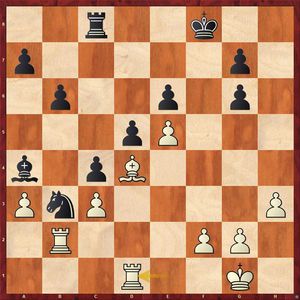 The first step of His Majesty's spectacular march to the queenside. Even if this idea might not be entirely correct from the absolute chess truth point of view, but it is a very promising one in an over-the-board game.

Ponkratov is consistent in implementing his plan.

This is a necessary delay because the bishop should be retreated from а4 first.

35.Ra2 is way too passive. The 2020 Higher League winner launches his kingside counterplay without allowing material losses stop him.

The mission is complete!

It turns out that despite Black king’s impressive progress it is still not easy to promote the pawns, whereas the opposite side of the board is about to see White start breaking through himself. On realizing what is going on, Ponkratov takes drastic to rectify the situation.

It only remains to start pushing the a-pawn after ...Крb5.

Black needed not react in any way and opt for 39...a4 instead.

Played somewhat ambitiously, and there was nothing wrong with the simple 40.gxh5.

This is an inaccuracy. On the other hand, it is hard to keep up tension in this position. Black should have probably opted for the straightforward 40...hxg4, and after 41.fxe6 Rxf2 42.Kxf2 Nxd4 43.cxd4 c3 the situation is absolutely unclear. 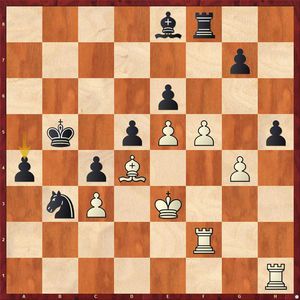 This one is a blunder already. 41.f6 g6 42.gxh5 gxh5 43.Rg1 was the right path because the passed f-pawn is way more dangerous than its counterpart on the other side of the board.

The position has suddenly escalated, and it turns out that Ponkratov has achieved a great progress. The black pawn has made it as far as а3, and it looks like the game is over after Black captures on d4 and brings his king to b3.

This is a mistake if we consider the above-mentioned. White needed to maintain rough equality with 44.Ba7, although I would rather be Black in this position.

An important intermezzo as it is vital to displace the rook from the f-file even at the cost of a pawn.

This is White’s last hope.

Black gets down to implementing the wrong plan. Correct is 50...Kb3 51.Rg1 Ba4, carrying out the same plan as in the game. The bishop retreats in anticipation of the white king arriving to d8 without attacking it.

Giving White yet another chance. The subtle 52...Ba4! was worth considering again. 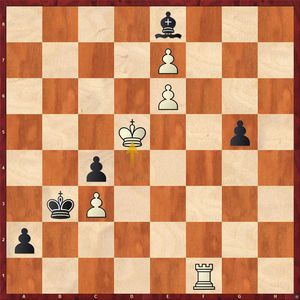 By bringing his pawn to g2 Black improves his position as much as possible. However, winning is still as difficult as solving a puzzle. Winning the game necessitates forcing the white rook to g1 via several zugzwangs (the white king is chained to the c3-pawn), and then play ... Bh5, profiting from the fact that Re1 is met by... Kb2, and the black bishop keeps an eye on the e2-square. This plan is brought to life using the so-called triangle, and in this position this technique must be repeated three times in a row! 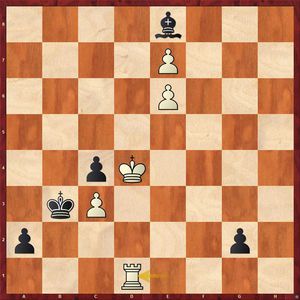 The first triangle. 61...Bh5 is premature in view of 62.Rg1, and the position is that of a mutual zugzwang in which the black king is forced to retreat. Therefore, Black aims to get the same position, but with White's turn to move.

White is forced to remove the rook from d1. 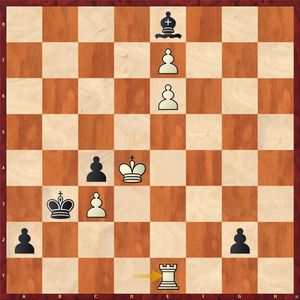 66.Re1 would have put Black up against the challenging task of having to find the double triangle idea.

In round six, the duel between Paravyan and Ponkratov is something to look forward to, while Antipov will hold his ground with the black pieces against Aleksandr Rakhmanov, who has scored a number of victories after an undermining debut.

Marina Guseva maintains the sole lead in the men’s section. In round four she managed to defeat Anastasia Bodnaruk, one of the main competitors for the Superfinal qualification. 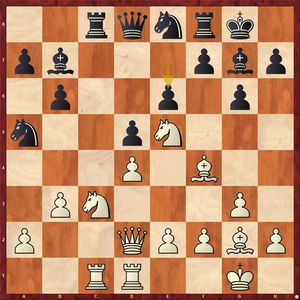 The symmetrical fianchetto does not seem to promise much in the way of sharp hostilities, but...

Guseva tries to break through in the center.

This seemingly logical reply allows several promising follow-ups for White. 15...dxe4 was the way to safeguard Black against all hardships.

White lets her opportunity go. Either the counterintuitive 16.Bh3 or the powerful piece sacrifice 16.exd5 fxe5 17.dxe5 would have challenged Black significantly and led to positions in which White dominate over central superiority.

Black is in good shape again.

Overlooking Black's unpleasant rejoinder. A pawn should have been sacrificed via 18.Rxc1 Qxd4 19.Be3, retaining an impressive compensation for the material missing. 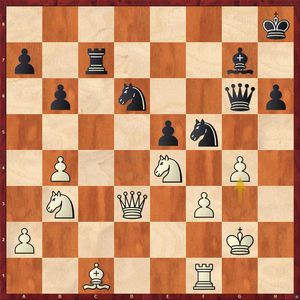 The protracted battle gave advantage to neither side, but Bodnaruk commits a blunder when making her time control move.

A blunder. Only 42...Nxe4 gave some chances to bail out; however, it is virtually impossible to hold this position after 43.Bf4.

In round five Guseva drew Alina Bivol to retain her lead further. As many as four players are trailing half a point behind: Daria Voit (with whom Guseva is paired in round six with the white pieces), Daria Charochkina, Alina Bivol and Ekaterina Goltseva.

The finish line tension makes itself felt more and more distinctly, let's see whom fortune is going to side with