The Russian GM Daniil Dubov’s participation in the team of Norwegian Magnus Carlsen, who has defeated our compatriot Ian Nepomniachtchi, has become the chess community’s most hotly debated topic of recent days. Is it ethical or not, is it appropriate or not patriotic? The opinions have divided and escalated to the point of "pardon impossible to execute." It was interesting to hear Ian’s opinion about this situation:

– In my opinion, this is business more than anything else because Daniil has been collaborating with Carlsen's team since 2018. On the other hand, because we worked together for about a couple of years as well it would have been more logical for him to stay neutral, in my opinion. However, we should thank Dubov on behalf of the team because my greatest chances of winning in certain games came with those ideas that, apparently, belong to Daniil.

– Which games are you talking about?

– This is game two, in the first place. This fascinating idea in the Catalan Opening should be given its credit. While some doubts as to Daniil’s involvement in Magnus' team existed going into this game, they virtually disappeared after that. Besides, as far as I see, in game six the order of moves’ choice was not without Dubov’s influence. Overall, both games gave me pretty decent chances of winning. Therefore, among other things, I want to congratulate him on great success!

– Dubov believes that Magnus' team has surpassed yours in terms of the opening preparation.  What is your take on this?

– It is hard to say. The openings were quite peculiar. We sticked to a principled approach by testing various concepts in the anti-Marshall, and the opponent's opening choice differed every time. To get even some small edge as White seems a very difficult task to me. However, in game two, the battle got out of hand – this success is to be credited to Magnus's coaching staff and Daniil personally! But jokes aside, this is an excellent idea. As such, we managed to get positions with a small or substantial edge; however, we must praise Magnus for his powerful performance at the transition stage from the opening into the middlegame. In most of his games as Black, he demonstrated an extremely high level. He was, most likely, out of home prep by that time but with an apparently clear understanding of what to do next. His following sequence of 4-5 moves would reduce the position’s complexity to a larger extent.

– Was Carlsen’s opening approach as Black aimed at equalizing no matter what?

– Objectively speaking, to try to take the initiative over as Black is a pretty optimistic match strategy nowadays; it is advisable only if absolutely unavoidable. Neither side thought of getting some substantial edge out of the opening. Yet another very practical approach should be noted here: after taking the lead to stop playing for a win with any color. This decision somewhat surprised and unsettled me, but it paid itself out completely. It would have probably been a slightly different story had I blundered less. However, the refusal to fight for more as White in the Petroff Defense on two occasions is a representative example of what I have mentioned before. Perhaps, the move 10.Qe1+ in game eight speaks for itself most vividly. It was part of a strategy that has brought success.

– Why did not you come back with 10…Qe7? After all, it would have led to an immediate draw, and you could have asked Magnus in a joke at the press conference if he was really afraid of the Russian game?

– At that moment, I was probably no longer capable of best judgment. Honestly speaking, I saw no big difference between 10…Kf8 and 10…Qe7…

– 10…Qe7 is an immediate trade of queens, which remained on the board in the game.

– I agree. With a reasonably high degree of probability, I believed that the queens would be exchanged off soon anyway, and 10…Kf8 did not seem like making much difference in this respect. Of course, it testifies to my condition at that moment as being exceptionally far from optimal already. I needed a rest day. It came right after this game, but it was already late. I would never have hesitated to make 10…Qe7 in nine out of ten cases. There is some irony in that while Magnus was taking a 40-minute think over his next move, I concluded that he would most likely go for 10.Qe1+, which would pretty much end the game then and there with extensive material exchanges as a result. I was probably carried away with my thoughts somewhat prematurely before it was over in reality. In fact, 10...Kf8 gave rise to this type of position... Most likely, this is still equal, but there is no – and there cannot be – any clear-cut path to a draw; even a pure bishop ending would be unpleasant for Black because of the h5-move despite otherwise completely symmetrical pawn structure.

If we omit the next blunder 21…b5? 22.Qa3+, the course of the struggle is already in White’s favor in general. White enjoys long-term pressure with no risk whatsoever. Indeed, it does not relieve Black of his responsibility; the position after 10…Kf8 proved more unpleasant than I initially expected. Why not 10…Qe7? We better leave this question as a rhetorical one.

– You mean you still need time to analyze its root cause?

– There must be some plausible explanation to all of it, but this is too much to discuss now given the short time format of our interview. To sum up, when expecting the move 10.Qe1+, my mind was seemingly enjoying the upcoming rest day already. 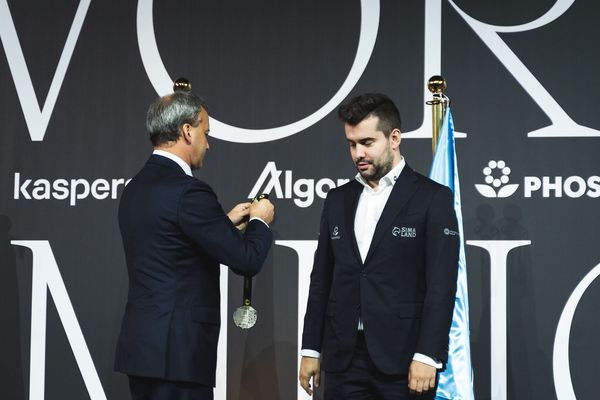 Arkady Dvorkovich is awarding Ian Nepomniachtchi with a silver medal


The closing ceremony ran in the same Expo hall that had hosted the games, only the famous “aquarium” (a soundproof glass cube in which the grandmasters had played) had already been taken apart. Present in the hall were world champions of the past periods: Nona Gaprindashvili, Viswanathan Anand (one of the official commentators of the match) and Zhu Chen, as well as the strongest female chess player in history, Judith Polgar. Greeting speeches at the ceremony were delivered by FIDE President Arkady Dvorkovich, CEO of PhosAgro and Vice President of the Chess Federation of Russia Andrey Guryev, and Chief International Participants Operation Officer at Expo 2020 Dubai Omar Shekhadekh.

In the return speech, the World Champion highlighted the following:

– First of all, thank you all for being here, and thanks a lot to FIDE and to Expo here in Dubai for organizing this great event. It has been great experience being here these three weeks. Thanks everybody who made this possible and huge thanks to my team, my family and other helpers who were partly here in Dubai and also abroad. They were of tremendous help. Even at the moments when my motivation may have been lacking a bit for this championship – theirs never flagged. We had very, very good and positive atmosphere. Thank you for all of that! Usually at the end of these championships there are things you are happy with and things you are less happy with. This time I can say that I am fully satisfied with my performance. Thank you! 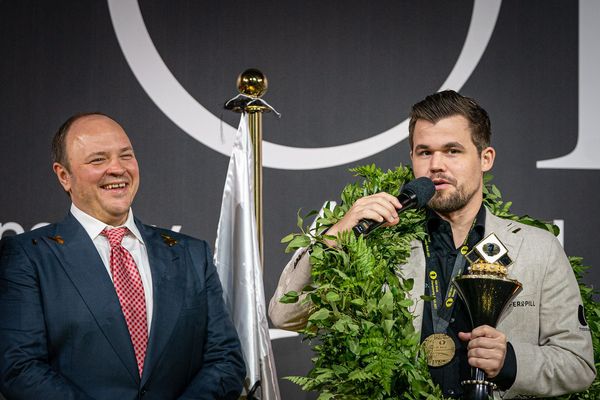 Magnus Carlsen was awarded with the champion’s cup. The trophy over 5 kilograms in weigh features 925 sterling silver with 999 gold plating, and obsidian and has been manufactured in Russia. The item is set with 39 pearls and a diamond. The cup was created by masters of the CHAMOVSKIKH Jewellery House with the support of the Sverdlovsk Region Chess Federation represented by its president Andrey Simanovsky, owner of Sima-Land company.

Vice-President of the Russian Chess Federation Andrey Guryev summed up the results of Ian Nepomniachtchi's performance:

– Ian is a brilliant chess player! He is young and, undoubtedly, has the whole world before him. The experience he has gained by playing today's most outstanding GM, five-time world champion Magnus Carlsen, is exactly what Ian was missing. Now he has this experience. We will never forget the sixth game of the match that lasted 7 hours 45 minutes and has gone down in history already. This battle exhausted Ian and there followed some mistakes afterwards…

Well, the crown is not returning to Russia this year. Ian could not win against Iron Magnus. But we are going to continue to develop chess in Russia at all levels together with the Chess Federation of Russia, nurturing new generation of players starting from schools and preschools. And this work is already bearing fruits – in two of the last three championships two players opposing Magnus were Russian grandmasters. 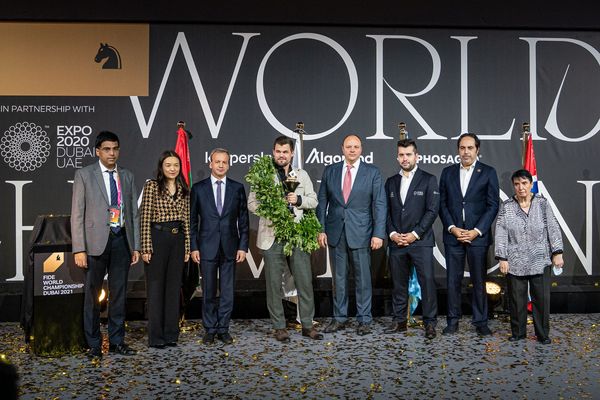 
When the official part of the ceremony was over, FIDE President Arkady Dvorkovich answered your correspondent's questions.

– Mr. Dvorkovich, the forecast you gave in our interview before the match proved true in that there would be more than two decisive games. However, what happened has probably come expected to you?

– It has. Everything that preceded game seven was quite expected. Including a boring draw in game seven that Ian needed as a breather. What happened later is hard to explain and was entirely impossible to predict. Unfortunately, Ian had neither inner strength, emotions, or experience to keep fighting when behind in the score. Fatigue and psychological discomfort produced three grave mistakes.

– Going into this match, the regulations were slightly tightened. Has this change justified itself?

– The prime idea behind changing the regulations was to subject players to greater stress and challenge them with full weight of the struggle. It has worked, no doubt. On the flip side, the losing partner is the first to come under even more pressure due to fewer days for rest and fewer opportunities to get prepared. The initial purpose has been achieved, of course. However, whether it is right or wrong will be discussed with the chess community: leading chess players and the media. Because it concerns both the players and the audience, we always need to find a reasonable balance.

Another idea was to have games at all weekends – on Saturdays and Sundays. The previous schedule (with a rest day after every two games) rendered this idea impossible. This is why we need to weigh all pros and cons of this decision.

– Are you happy with the way the match was organized as part of Expo-2020? I mean those other activities around the match?

– Yes, we are happy indeed! The exhibition itself is clearly a very complex event involving one of the most complex infrastructures, but our mutual understanding and collaboration with the Expo team allowed us to achieve much both directly and indirectly related to the match. There were many VIP persons, many guests, spectators, and great enthusiasm from the children. This is great!

We only needed a couple more days to have all this infrastructure prepared completely in order not to create an impression that the preparations have finished at the very last moment. This is a takeaway for the future. However, we have done everything that we could.

– Have you decided on the 2022 Candidates Tournament venue?

– So far, the only officially-filed application that we have is from Spain. If no other applications are submitted, I think we will choose this country. We have information that some other countries are thinking about submitting applications. That said, this decision will be taken by the FIDE Council scheduled to convene in only ten days. Let us wait and see!