Four Plus One Scheme

The Russian Championships Higher League is about to finish. Not only have both sections of the tournament defined their leaders, but this lead is as wide as one point at that! Shining in the men's section is Pavel Ponkratov. Playing the black pieces, he managed to defeat David Paravyan and take Aleksandra Goryachkina’s position in a positional bind. The tournament leader’s level of preparation is praiseworthy. Put up against difficult problems from the very beginning of the game, his opponents would not manage to solve them over the board.

Exclamation mark for the right opening choice! Paravyan’s opening strategy is always a mystery, but Ponkratov’s guess proved to the point as he managed to get David into a position in which his insight was less than fundamental.

This is an inaccuracy. Black’s strategy can only be challenged by 7.Nxe4 Qxg2 8.Ng3 Nf6 9.Bf1 Qd5 10.Nc3, when White’s central domination gives him a clear edge.

Black returns the favor: Black shouldn’t have exposed the а2-g8 diagonal for no apparent reason. Black experiences no problems whatsoever after 7...Nf6 8.Nc3 Qg6, which has been proved by the recent Candidate’s participant Kirill Alekseenko.

This too slow a move is not representative of the last year Gibraltar Open’s winner. The energetic 9.Bxg8 Rxg8 10.Qb3 or even the more extravagant 9.b4!? looks more interesting, as in the latter case the pawn taking is ill-advised because White generates a powerful initiative after 9...Nxb4 10.Qb3 Nf6 11.Nb5.

Flibustier is engaging his opponent in a close-range battle!

This is a follow-up to the passive strategy. It is hard to keep your nerve when facing Ponkratov, but White should have continued his development and ignore Black’s threats. Thus, after 12.Bb2 underwhelming is 12...Bxg3 due to 13.Rg1 Bxf2+ 14.Kxf2 Ng4+ 15.Ke1 Qf6 16.Qe2 Qxh4+ 17.Kd1, and White ends up consolidating his position.

David is not true to himself in this game. I am confident that being in good shape the native of Moscow would have found something like 13.a4 Nxb4 14.Qb3 a5 15.Ba3 with rich compensation for the sacrificed pawn. 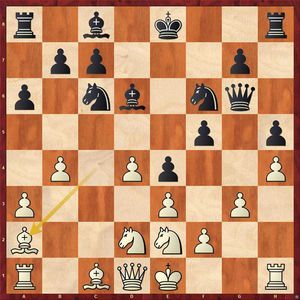 An excellent decision! Now that the c4-square is taken away, White finds it hard to come up with any active idea.

Black goes for it! 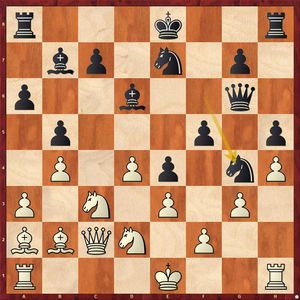 17.Ne2 would have kept White in the game. Even if Black’s position is clearly superior, the decisive blow does not lend itself to easy finding.

Black is given a free hand in carrying out his offensive. A player of Ponkratov’s caliber does not take long to finish his opponent.

Paravyan does his usual best to muddy the waters, but his position is way too bad to pull it off.

In round seven the Higher League witnessed an unprecedented event as board one had the world vice-champion Aleksandra Goryachkina paired against the many-seasoned Alexey Dreev! Never before has a female chess player, albeit of such a high caliber, managed to achieve anything similar in the men's competition. The audience was looking forward to a sensation, but the tournament leader came up with a tricky opening line...

This is the latest trend. This is how Daniil Dubov challenged Anish Giri in one of the Magnus Invitational stages. Even such a seasoned player and brilliant theoretician as Giri failed to oppose this tricky approach.

11.a5 is also worth testing with the idea of taking Black's queenside in a bind. 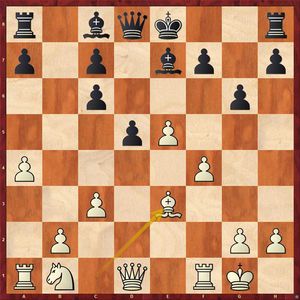 Now Ponkratov is in time to take control of the dark squares.

Taking full control over с5 via 18.b4 looks even stronger. 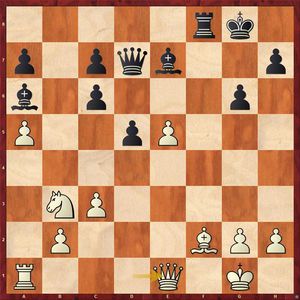 Goryachkina’s position is lost strategically. She should have escalated no matter the consequences. The reigning Russian champion must have correctly evaluated the inferior consequences of winning the queen with the tactical resource 19...c5 after 20.Nxc5 Bxc5 21.Bxc5 Rf1+ 22.Qxf1 Bxf1 23.Rxf1. However, she should have looked into the central break 19...d4 to breathe life into her pieces: 20.Nxd4 (20.cxd4 Qd5 with a sort of blockage along the light-squares) 20...c5 21.Nf3 Qe6. Black’s pressure along the а8-h1 diagonal gives her decent compensation for the sacrificed pawn.

It gives White full control of the situation, which Ponkratov does not fail to convert with the technical performance to achieve such an important victory.

Trailing a point behind the leader are as many as four athletes: Aleksandr Rakhmanov (he is paired with Ponkratov as White), Alexey Sarana, Alexander Motylev and Maksim Chigaev.

Among other games, it is worth mentioning Alexandr Predke’s victory over Evgeny Alekseev in the popular line of the English Opening.

Aronian's gambit 9.Qa4 used to be in the limelight a while ago, but then they found a way to neutralize White's initiative.

This key idea was introduced at the high level in the Candidates Tournament of 2020-2021, in which Ian Nepomniachtchi managed to navigate the difficulties over the board to outplay Anish Giri — one of the most dangerous competitors of that event. 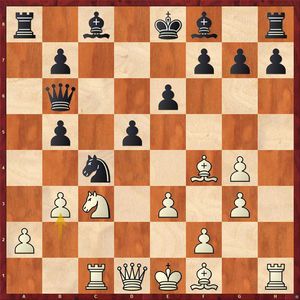 A positional blunder. The misplaced knight will be a helpless observer of Black’s getting annihilated.

The better retreat of the knight fails to solve all problems either: after 13...Nd6 4.g5 Bd7 15.Bd3 White retained the initiative in Giri – Svidler, Magnus Carlsen Invitational 2020; however, it was Black to celebrate victory in the end. This line looks like a disaster for the Netherlands player!

This is not bad, but even stronger is the crushing 15.g6 fxg6 16.Bd3, and Black’s position falls apart.

Alekseenko is known to be an excellent defender capable of fighting back cold-bloodedly even from such an unpleasant position as this one.

This seemingly logical move is an excellent opportunity for Black. The counter-intuitive 18.Nxc1 is a much stronger move. 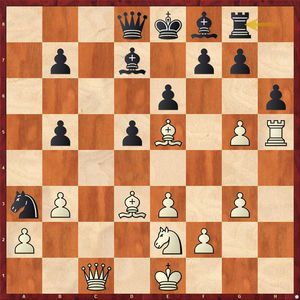 White’s position is close to winning, but Predke comes up with unnecessary creativity.

However, Alekseev lets his golden opportunity go. Black can capture the piece following the crucial intermezzo check 22...Bb4+ 23.Ke2 fxg6 24.Bxg6+ Ke7 25.Rxg5 Qc8, and it is only Black to win thanks to his material superiority. 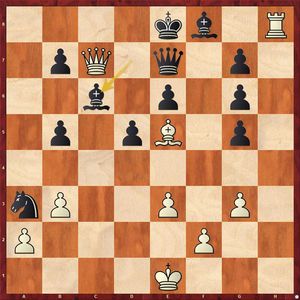 A simple but nice finale.

Polina Shuvalova’s performance is also worthy of praise. The native of Moscow has assimilated into the harsh male environment to the degree of defeating Artyom Timofeev with the black pieces.

So much for Polina’s combative mindset!

Timofeev clearly wants to catch his opponent off guard by sidestepping the main theory. 5.e4 is the theoretical mainline.

A creative approach! The simple 5...c5 lacks nothing, but the text adds more combative content to the game.

This is an inaccuracy. The immediate 7.h4 should have been preferred to probe into Black’s plans. Thus, in the case of  7...g4 8.Ne5 h5 the white knight can retreat to d3 to keep an eye on the beautiful pasture on f4.

This is no longer as timely as a move ago.

The d3-square is no longer available, and the retreat to с4 is clearly inferior if compared to d3. On realizing this, Timofeev opens up the game.

Not fearing any ghosts!

11.Bb5+ does not change anything because Black can simply move his king 11...Kf8 with no problems whatsoever after 12.Nd3 Qf5 13.Bc4 Nc6. Meanwhile, this position offers more opportunities to go wrong for both sides. 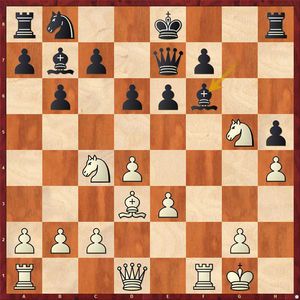 This is a turning point of the battle. White has opened up the f-file, but the f6-bishop is Black’s reliable safeguard. Timofeev presses forward to the extend of committing a blunder.

White ends up winning a pawn, but its price is too high! Black completes development and launches attack along the g-file. Besides, the h4-pawn will be an easy target. 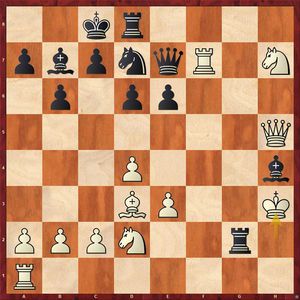 One may think the position is unclear, but Shuvalova has the queen sacrifice under her sleeve.

White is defenceless despite being up a queen.

An impressive achievement of the Russian Vice-champion! Even though Shuvalova went down to Chigaev in the next game, she enjoyed stable advantage throughout that game, and I will not be surprised to see her play at the top board one day.

Marina Guseva has consolidated her lead in the women’s section. In round six she defeated Daria Voit as White and in round seven the Moscow champion Daria Charochkina as Black.

Guseva opts for the exchange line as she did against Bodnaruk, and her choice of opening was to the point! 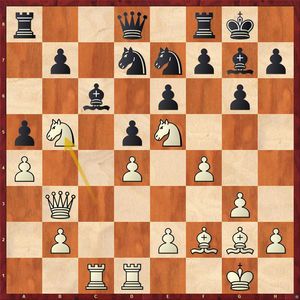 Marina got some edge in a difficult struggle, but Black's position is still very robust. Daria Voit’s next move is a blunder.

To win the game for White is only a matter of time. 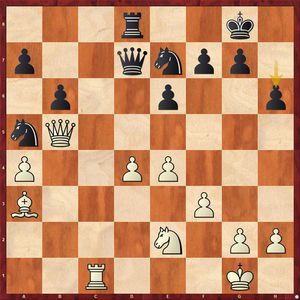 An interesting treatment of the opening (Caro-Kann with 3.f3 transposing into a sort of Nimzovich Defense) gave Charochkina a better position, but she loses control in the battle that follows. 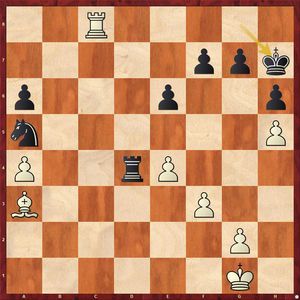 The game is equal, but Charochkina loses the thread of the game.

This is wide off the mark. White is still out of the woods after 30.Rc7.

A decisive error. Only 33.Bd6 allowed staying in the game.

The game is over.

If anyone can stop the player on the roll, it is a strong-willed Evgenija Ovod; however, she plays Guseva as Black. The second place is co-shared by Anastasia Bodnaruk, who is to play Black against Tatyana Getman, the last year's superfinal finalist.

If the fate of one ticket in both tournaments has virtually been sealed, the remaining four promise to see a fierce struggle. Let's see whose nerves prove stronger and who Lady Fortune is going to side with!

I bid you farewell now — GM Dmitry Kryakvin will prepare the tournament wrap-up.