The spell of spring-like warm and sunny weather has come down on Sochi, and your author has been carried away with it to the extent of giving you this follow-up review with a slight delay. Now we can state that in the men's tournament the intrigue virtually died in round one after Mednyi Vsadnik defeated Molodezhka. Meanwhile, in the women's section the most exciting events started unfolding towards the mid-race with the strongest teams sorting it out between themselves. We have already highlighted the key matchup of round three between SShOR ShSh and Ugra (let me remind you that it ended in a 2:2 draw), and in round four the rating favorite and current champion from Ugra was pitted against the lower-rated Moscow Chess Federation team.

The match outcome was sealed on the top two boards. The world Vice-champion of the long-ago year 2004 struck first to bring her team forward. A true master never fades away! 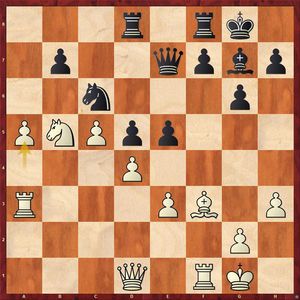 Black must have regretted this king's weakening move down the road.

That's it, strictly speaking, because there is no holding the white passers without sacrificing much material.

28.Qc4 Qf6 29.Nb5 is tougher. Now Olga starts spicing things up even at the cost of significant material investments. 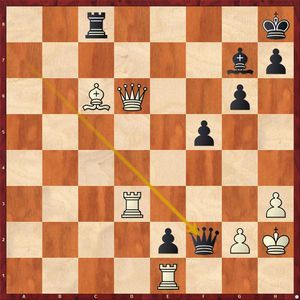 White should have avoided the trade of rooks now and the next move.

Missing the last opportunity: the position arising after 37...Rc3! 38.Rxc3 Bxc3 is a fortress.

The time control is over, and both rooks are in the refreshment stall now. The rest is easy.

Black turns to the exchange of a pair of rooks to stop the linear checkmate.

The 2015 vice-world champion could have equalized the score after first outwitting her younger opponent, but then stumbling when victory was almost in her pocket. 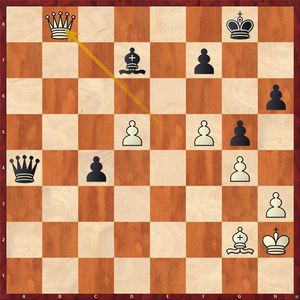 Black's margin of safety is substantial, but calculating over the board such lines as 50...Qd1 51.Qxg5+ Kf8! 52.Qd8+ Kg7!! 53.Qxd7 c3 or 52.Qe3 Kg8 53.Qc3 Qd3 is far from easy. Polina should have figured out that tucking away the king was of paramount importance, and that a strong c-passer and the exposed position of the white king would secure her half a point. 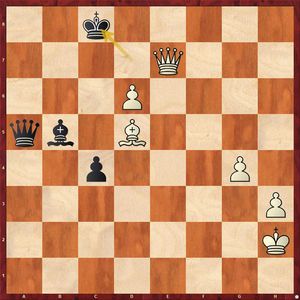 White was obviously willing to press his material advantage home without much hassle and without blundering some random check along the way. White could have kept the queens on the board with 69.Qf4 c3 70.Bf5 Qc5 71.Bc2, and Black is in bad shape.

This hasty move lets go of the victory. 70.Bf5! was correct, but the subsequent lines are not that simple: 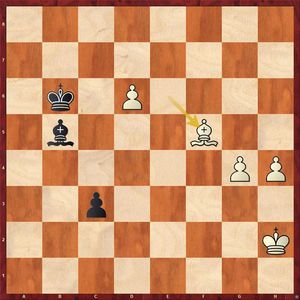 this is understandable: if you miss an unexpected move, you want to put the bishop to a safe square, block the passer… Meanwhile, it was necessary to retreat it one square only - 72. Be4!, cutting off the enemy king from the d6-passer. After 72…Bxg4 73.Kg3 Bd1 74.Kf4 c2 75.Bxc2 Bxc2 76.Ke5 there is no stopping the white king from showing up on е7, and the black bishop falls victim to the trick known in chess as "trousers".

With the help of such small stabs, black does not allow the opponent's king to move away from the d6-pawn and get away with the c3-passer unpunished.

Following this round, the St. Petersburg team SShOR ShSh grabbed the lead after whitewashing the Moscow Oblast team with a 4:0 score. 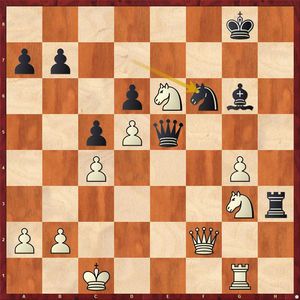 What is Black supposed to do? Taking the knight to d7 to cover the f8-square seems necessary, but then 31. Nf4 with material acquisitions. However, Anastasia has an insidious blow up her sleeve. 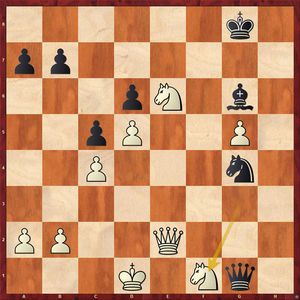 The next day, there took place yet another change of lead after FSM defeated SShOR ShSh with a minimum score. 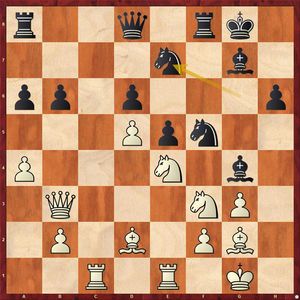 Tigran Petrosian used to say his summer cottage was “financed” by the KID Defense. Nastya Bodnaruk also seems to fare from this debut, otherwise she wouldn't have employed it regularly for so many years now. However, something went wrong for her in this game. Black's position is rather "loose": both flanks are weak and there is no real counterplay against the opponent's king. Shuvalova gradually pushes back the opponent's pieces.

The knight clears the way for his passed pawn.

The immediate 32.Rxg7! was also possible. 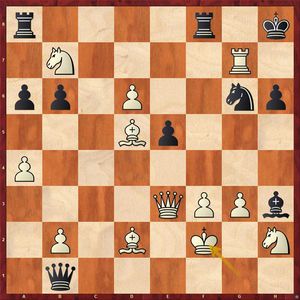 Black's situation is hopeless, and the sacrificial fireworks only last him until time control.

Fireworks happened in the men's championship as well. This is, perhaps, the most visual, but the mysterious of all such cases. 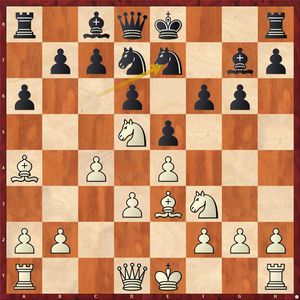 The prosaic continuation 11. d4 c6 12. Nc3 with a significant advantage did not suit Mikhail Antipov for some reason, and he decided to create his own "immortal" game.

The mind-boggling blow 11.Nxe5 got into the broadcast by mistake - too beautiful to be true, but the author of these lines was the first victim who fell for it.

A draw by repetition was 13.Nf6+ Kf7 14.Bxd7 Bxd7 15.Qf3 Kg7 16.Nd5 Kg8 17.Nf6+, but it is clearly not for the sake of this quick draw that Mikhail, a brilliant tactician, has brewed this combination. However, he must have underestimated some defensive resource of his opponent’s. 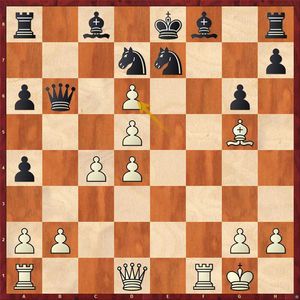 What a spectacular setup! However, aloof to any visual effects, the engine's evaluation is -5. 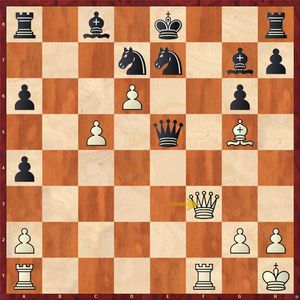 Is it going to end in a threefold repetition after all? Not really.

And here is an example of a lot more well-prepared attack.


Not only did Esipenko opt for the Karpov's favorite 6. Be2 in response to the Najdorf system, but he otherwise delivered the whole game in the Karpovian style. 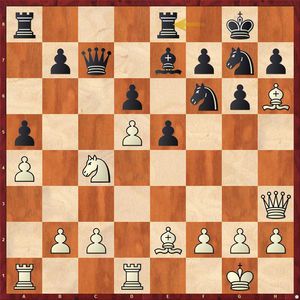 Now the black knight intends to plant itself on f5. White nips the idea in the bud without any second thoughts. 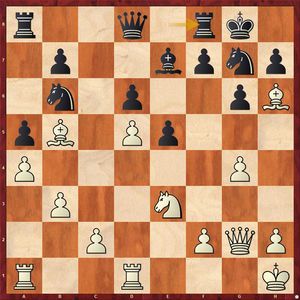 They taught in the old days that the knight belongs to this square! The engine votes for 25.f4, which looks stronger indeed.

There is no avoiding this weakening for Black. However, it gives White a clear plan of the king’s offensive.

With the queen posted on h5, it's time to open up the files. 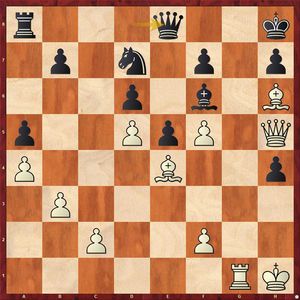 A decisive maneuver: the bishop returns to b5 to ruin Black's defenses.


The СPRF team member Vladimir Potkin was envied by everyone for having brought to Sochi such a cozy jacket! 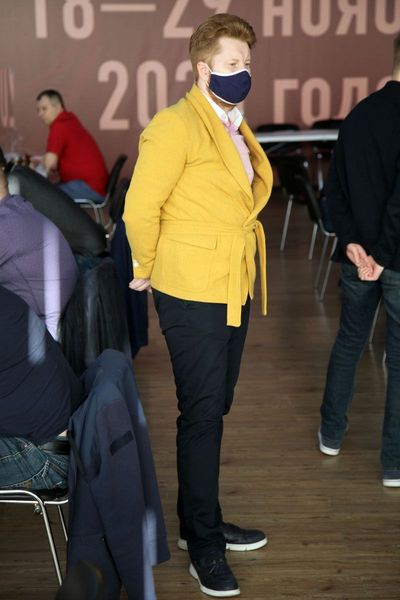 Black's position may actually be not as bad as it looks. 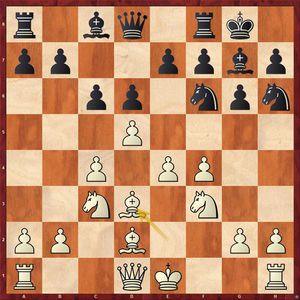 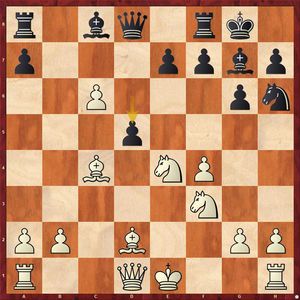 Was it this move that Black must have underestimated? White builds his further play around this far-infiltrated pawn.


The final example of our selection goes to demonstrate the difference between a human and a computer's perception of the position. 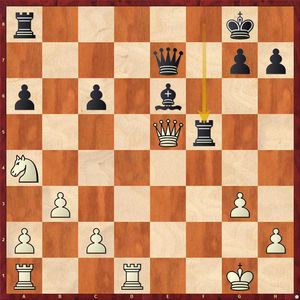 Black is clearly well compensated for the sacrificed pawn: his pieces are active, and the opponent's king is quite exposed. Sergey Rublevsky has just played 21...Rf8-f5. Where should the queen retreat?

The move suggests itself to maintain the pin and keep the opponent's bishop out of d5. Strange as it may seem, this error could have become fatal. Correct is 22.Qd4! h5, with a double-edged play.

Would not any human player aim at mounting his bishop to the big diagonal in a position like this? Rublevsky comes up with a beautiful tactical idea of setting this plan in motion. However, the engine says that there exist other lines that should not be neglected: 22...Raf8 23.Re1 Qf7! There is no touching the bishop: 24.Qxe6 Rf1+! 25.Kg2 Qxe6 26.Rxe6 Rxa1, and the prophylactic 24.c4 is followed by 24…Bc8! 25.Nc5 Rf3 26.Qe2 Rf2 27.Qd1 Bh3 with decisive threats. The h3-square is as equally perfect a home for the bishop as d5! 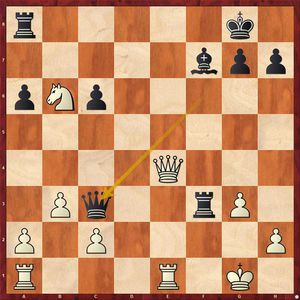