Valentina Gunina: I dream of playing in a positional style!

– Valentina, congratulations on your second successive victory in the Superfinal! It seems that the two losses at the start angered you considerably?

– I often get asked as to why I always play so uncompromisingly, as if consciously avoiding draws. I respond by saying that such is my style, not because I don’t respect by opponents, nor do I overestimate my strength. When I first began playing chess and participating in tournaments, I had to consistently win everything to qualify for national, European and World championships, given that I had some financial difficulties. That mentality remained to some extent.

I am told that such style of play wouldn’t be appropriate for a women's single-elimination tournament, so I am working on my game. Overall, I’m faring well, my living conditions have improved, my life is more comfortable, but my character is unlikely to change – I am who I am. I can adjust things, but I wouldn’t radically change anything.

– As pointed out by commentators, you could draw the first two games if you repeated the moves, but nevertheless you strove to win, despite the lack of material. Why was that?

– I thought a lot about that. It’s indeed a very interesting matter. I’ve only just discussed it with Mark Glukhovsky, as well as with my coach Alexander Kalinin.

I think that I couldn’t have done that simply in the physical sense, because I haven’t adapted yet, even though I’ve reached a considerably high level. I would have liked to play like Alisa Galliamova, in her positional style, but so far I haven’t managed to. If I could, I would play positionally. I now understand clearly that I need to adjust my style, and my general approach to the game. 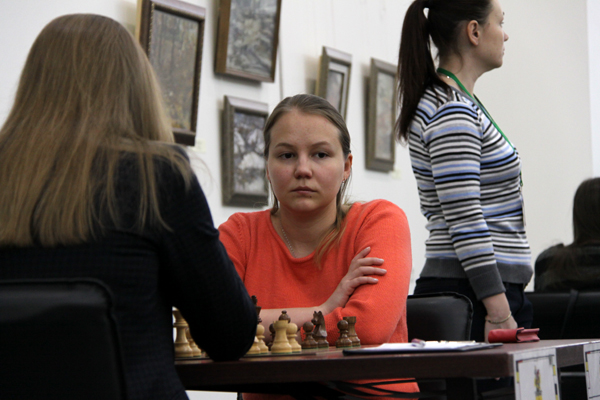 – Which game would you draw special attention to in this tournament?

– As according to Sergey Shipov, the last round was quite a thriller. I didn’t want to play 12…f5, so I did 12…f6, because Alisa Galliamova is extremely efficient in a positional, well-paced game. I wanted to intensify the game, but my sacrifice of the pawn was perhaps unsound. When we were analyzing at the press-conference afterwards, I realized just how many blunders I committed; for example, I totally forgot about the b5 square at the critical moment of the game.

But I do believe that I did well, because the Superfinal saw some complicated games, and I managed to finish all of them.

I’ll reiterate that I’d like to enhance my positional play. My game against Natalia Pogonina was the closest to that, which I enjoyed very much. I gained a small advantage and then concluded the game to a victory. I also liked playing against Alexandra Kosteniuk. My game with Olga Girya was a complicated, a somewhat flawed one, although it was very interesting.

– You worked in Kazan with Alexander Kalinin?

– Quite right, I arrived in Kazan with Alexander Vladimirovich who is my official coach. I train in MGFSO ‘Karpov Chess School’ which sponsored my coach’s trip. There, I’m also mentored by Igor Konstantinovich Yanvarev. My work with the two coaches is split accordingly: Kalinin teaches me textbook material – he remembers numerous standard game strategies; with Yanvarev, we work on calculation and endgame.

I’d like to clarify the myth that apparently I train with Vladimir Malakhov on a daily basis. Often I am asked ‘’If Malakhov is your coach, then why are you playing such rubbish?”. In reality, we are close friends, he examines my games and offers me moral support at tournaments, but daily tutoring was never a matter. I would have been happy to have him train me every day, perhaps in that case my style would have changed. However, unfortunately, I cannot afford to have him coach me.

This year, thanks to the Russian Chess Federation, he coached me prior to the European Championship, where I managed to win. We had a brilliant team. I’d like to thank Vladimir and the RCF for that! 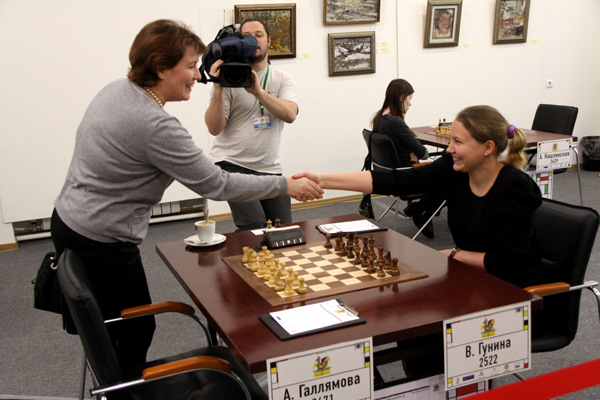 – How did your life change after obtaining three victories at the Olympiad and two European champion titles?

– Of course, it was a huge pleasure to be granted the Class I order ‘For Merit to the Fatherland’. It’s amazing to play for such a strong team like ours. The girls and I often say that the time we spend together is always the best. We have great relationships within the team, and of course with our coaches – Sergei Rublevsky, Alexander Riazantsev and Eugeny Naer. We convene only prior to official team tournaments, but I would have preferred to meet more often! 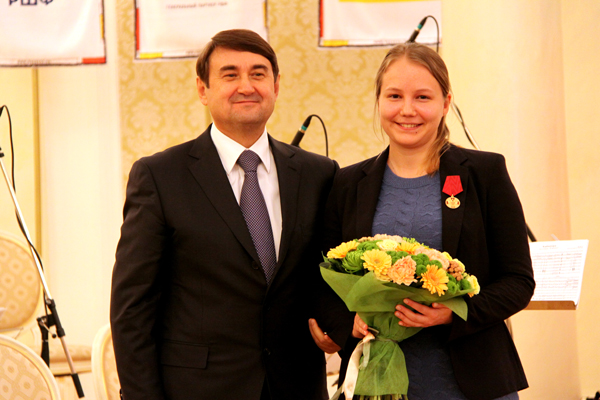 Valentina received her Order at the opening ceremony of the Superfinal

As I said earlier, my quality of living is improving. I was born on Far North, then I moved to Moscow, where I studied at the Russian State Social University whilst living in a dormitory. Later, I was lucky enough to afford a flat on the far outskirts of Moscow, but I am now hoping to move more centrally so that my commute to the Begovaya station takes an hour instead of the usual hour and a half. It is extremely difficult to spend three hours on travelling to and from work. I’ve always tried to resolve the problem, and it seems that I’m close. I hope that then I will start playing more positionally.

– In which tournaments are you planning on playing positionally?

– I’m flying to China for the World Mind Games on the 8th of December. After that, I’m resting before I play in the Group B of the Wijk aan Zee. Undoubtedly, it will be difficult to come up against the men with my style, but I will try to improve.