The second third of the match fully justified the strategy adopted by the Russian runner-up’s headquarters. While in the first four games Aleksandra was pressing, and the champion defending brilliantly and managing to capitalize on the only scoring chance that came her way, the second 4-game segment marked complete domination of Goryachkina. It all comes to will power, talent and pressure of a young girl contesting the world crown, but there is no unmentioning of excellent work of her assistants. As in the Candidates tournament, Aleksandra's most effective opening schemes are in perfect alignment with her athletic style. However, it is too early to celebrate yet as after the rest day Ju Wenjun will have to “wake up” and show her outstanding strong-willed qualities.

While the opponents were on the move from Shanghai to Vladivostok, there happened quite a few noteworthy events. Alas, a sad Iranian hijab story continues to gain momentum as chief arbiter of the match refused to return to her homeland, and they say that most talented Iranians dream of following in Firouzja’s footsteps as well. You will find more about this subject in Eteri Kublashvili’s blog dedicated to the fight for the world title. 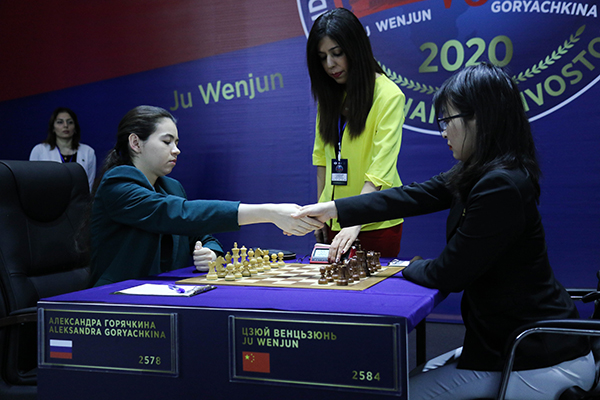 Following the shifts in the Russian government, a bunch of various memes appeared on the Internet, and it was not without pleasure I found one dedicated to chess, in which Goryachkina and Ju are playing out a lengthy endgame position, and the legend reads: “Hey, hold out there even if queens are missing.” In a classical interpretation, there was also a line about good mood, and after the first of her victories a usually stern and restrained Goryachkina was literally glowing with happiness at a press conference. She managed to break through the champion's magical defenses!

Introduced by Igor Lysyj and Alexander Riazantsev, this curious move debuted in 2012-2013 as Black aims at immediately solving the bishop problem. First, at Vadim Zvjaginsev's serve, White reacted exclusively with 7.Be2, but the Chinese found the move 7...d4!, which provides Black with decent play.

Looking for improvements, such players as Eljanov, Ponkratov and Kryakvin even resorted to tricky 7.a3 in this position. However, the seventh move with the d-pawn is likely the strongest. 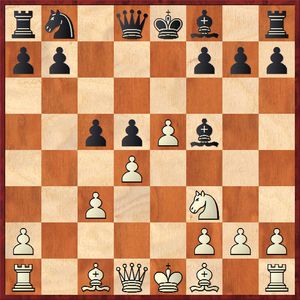 White has set up a strong center and, having grabbed space, is dreaming of grabbing even more by setting in motion his f-pawn later in the game. In his turn, Black's play should be very precise and directed against White’s center.

It is, of course, unlikely that Goryachkina went for the game without a double check in this direction, and Ju should have remembered exactly all lines from the Novocherkassk master’s preparation. The Chinese made an interesting alternative move, employed by the leader of the Chinese chess Ding Liren.

A reliable 12...Be6 was seen in a recent duel between Nepomniachtchi and Anand, but the Chinese champion quickly made a more ambitious move, tested in a recent game in the Chinese league. Black sacrifices a pawn. 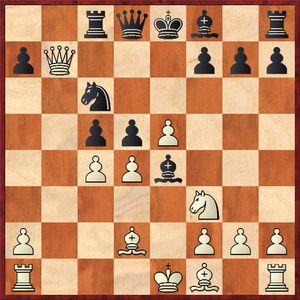 Ju fell victim of a well-known phenomenon when a substantial number of positions to be committed to memory going into the game often comes with overlooking the most “human” replies. Thus, Vladimir Tukmakov dwells on this in his new book “Play (not) Like a Computer”.

Alexandra’s sequence looks very logical as she traded pieces and brought the queen back into the game, but it turned out that this line either was not or was superficially analyzed by the Chinese headquarters. The engine is optimistic for Black after 16...Rc6 or even 16...Kf8 (ChessPro), but the Chinese wanted to shift the brunt of the battle into the endgame once again.

Black has superb compensation for the pawn after 19...Kc7 20.dxc5 Rhd8, 19...Nc6 20.dxc5 Ke6 or 19...Kd8, and it should be a draw with precise defense. However, keeping in mind 100-move tortures from Goryachkina, Wenjun tried to play as precisely as possible and placed her king in danger instead. 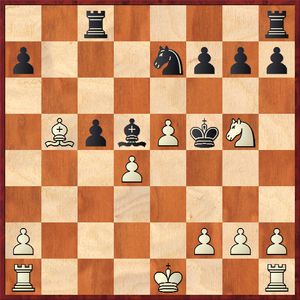 Even stronger is 21.f4! Kxf4 22.Nxf7 (ChessPro), and Black is in dire straights; in the game the Chinese player came up with an interesting exchange sacrifice.

White is up an exchange, but Black has a passer and his active pieces.

More precise is 24.Kd2, bringing the king in the center! Now Black has sufficient compensation.

26.Nxh7 Bxa2 27.Ng5 Nc6 is not safe because with pawns running down the board on opposite flanks, the bishop may prove even more efficient than the rook. 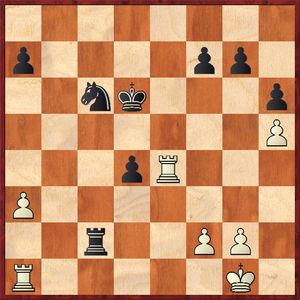 With 30...Ke6? failing to 31.Re1+, Black has to agree to have his kingside pawn chain compromised.

Also falling victim to excitement and nerves! In lieu of a prophylactic 31.Rd1 Goryachkina rushed to grab material, giving her opponent an amazing opportunity to save the game. 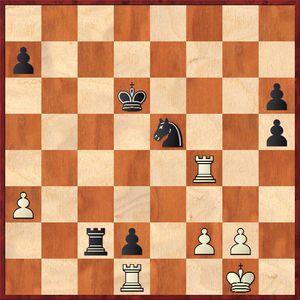 With the white king having taken the passed pawn under control, the rest is a matter of technique.

Alas, Black cannot even take the a3-pawn, while White starts pushing their own pawns toward the queening squares.

The black king is unable to defend his knight and stop the passing f-pawn at the same time.

The world champion was seemingly discouraged. In a timid attempt to get around the Berlin ending in the following game, the ended up in a worse position as White. 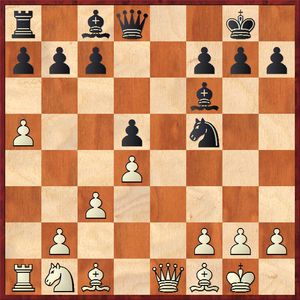 Here, the champion started misplaying the position somewhat by committing her pawns to the squares of her bishop color, and was already worse in a short while.

Aleksandra was consistently rallying her forces on the kingside, and, to the delight of her fans, chessbomb started displaying a solid plus in her favor. This is when Ju gathered herself and managed to stand her ground. 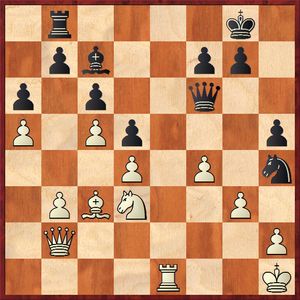 It is not a rare case for ChessBomb to produce faulty evaluations, which is the case with the recommended 33...Nf3!? 34.Re3 Ng5 35.Nf2 Ne6 36.b4. White is solid, and her position is an extremely hard nut to crack.

Alexandra again subjected the opponent to eternal endgame torture, but the Russian had fewer chances of winning here than in the “knight versus bishop ” finale from the first third of the match. A draw was agreed on move 105.

A few days later, the opponents met in Vladivostok, and here Ju went for the anti-Berlin 4.d3 for the first time, having a last achieved a long-awaited slight edge. Goryachkina once again had a perfect grasp of the positional nuances, and the Chinese could not squeeze anything out of the two white colors in a row, stipulated by the match regulations. 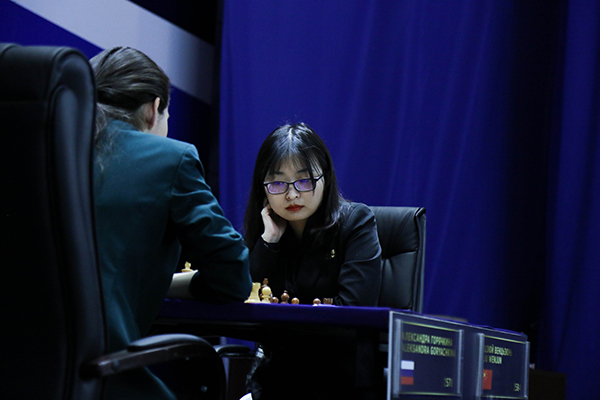 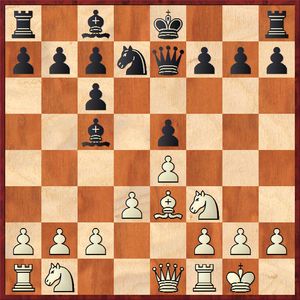 Goryachkina aims at simplifications by exchanging off the minor pieces and then queens. 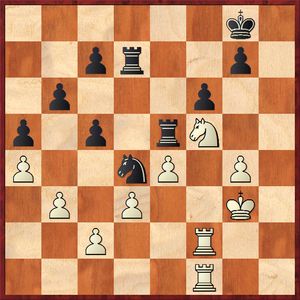 White has squeezed the maximum possible as her pawn structure is better, and there is a prospect of getting at her opponent at the kingside. But Goryachkina acts without prejudices and trades the knights, keeping in mind the old Tartakower saying about the drawish tendency of rook endings. 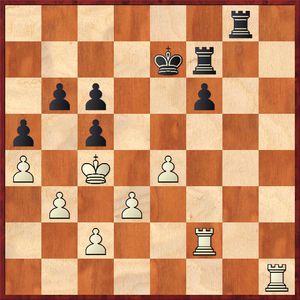 This is an important move! It stops the white rooks from getting to the b6-pawn, and after 47.Rfh2 Ke6 48.Rh8 Rxh8 49.Rxh8 f5! 50.exf5+ Rxf5 51.Rb8 Rf4+ 52.Kc3 Rb4 the black rook is in time to take care of the queenside. White has no other effective plan, and the breakthrough essayed by Ju led only to mass simplifications.

It is no wonder that Sergey Shipov regularly calls Sasha “Petrosian in a skirt”! The match is very reminiscent of a world match in which Petrosian took the crown from Mikhail Botvinnik. Back then, the champion also scored first, but gradually this limiting, extremely reliable manner of play overwhelmed the champion. Petrosian won one game and then broke ahead by winning yet another one.

For the Vladivostok fans, who are happy to attend the games of the Russian half of the match (I was in the city last summer and know many in person), Goryachkina brings back a female lead from Pacific Rim. There, the Earth invasion is carried out from another world, and the coastline is guarded by huge warbots manufactured by people and controlled by specially trained professionals. There is no unmentioning that present Hollywood action movies no longer do without female leads, not to mention the fact that brave ladies even went as far as doing away with the last edition of the evil terminator. And a brave lady, charging the battle against the invading monsters with unshakable hands and an impassive stare, is associated by the Far Easterners with the runner-up.

Game eight brought a second victory to the Russian. It had everything: subtle plans a la Petrosian style, as well as clear geometry. 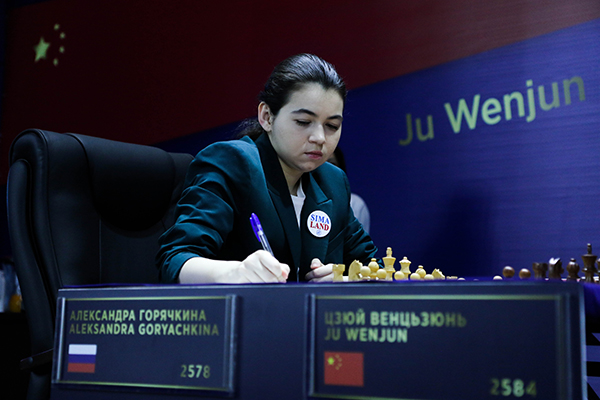 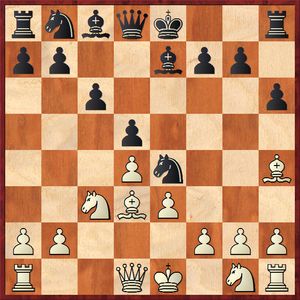 The Chinese continues to shuffle openings as Black – half a century ago, the Hungarian chess players, led by Lajos Portisch, used to prefer this line, and then it was for long taken over by other, more popular systems.

Black has a comfortable position, but the world champion was seemingly not very familiar with its nuances, which accounts for her further inaccuracies. Why not try something as simple as 16...Bc8?

In the case of 17...Rhe8 18.Nd4 the knight occupies the central outpost; therefore, it should be exchanged off. 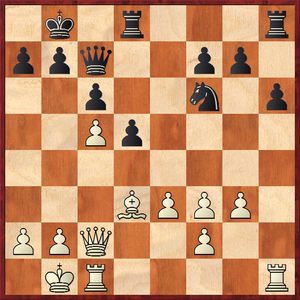 This pseudo-active move is very committal for Black. Capablanca's legacy says to place pawns to restrict the bishop, i.e. 19...h5 with approximate equality.

Instead of arranging pawns along the light squares, Ju places them along the black ones, leaving the h6-pawn in a weak state. It remains only to rely on the dynamics afforded by the d4-pawn. 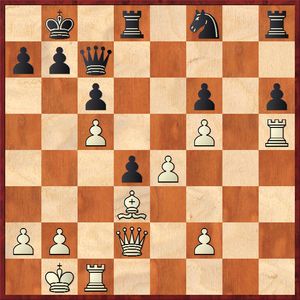 Bringing the knight into the game via 25...Nd7! was discussed during the press conference. Goryachkina answered that she would not have gone greedy with 26.Rxh6 Rxh6 27.Qxh6 because of 27…Qa5!, but would have chosen a simple 26.f4. After 26...Rhg8 27.Rxh6 Rg4 28.Rc4 White is for choice, but the black pieces are active and the game is still double-edged.

Even choosing to play along the g-file could have been effective: 28...Rdg8 29.b4 Qg3 30.Bc4, and to avoid a difficult endgame, you must sacrifice the exchange, but it was definitely a way to go! Ju decided to start the queenside counterplay and blundered a simple central breakthrough, which immediately dooms her position. 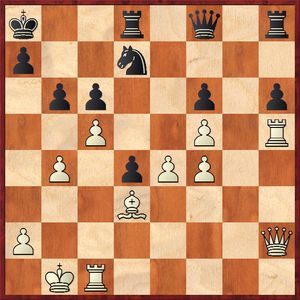 White is using all pieces and pressing the opponent’s main weakness, the c6-pawn.

Black fires her last bullet, but it turns out to be a blank one. 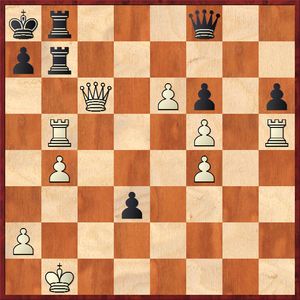 37...d2 38.Rh1 helps neither. With Goryachkina eliminating the passed pawn, the game is over.

This loss comes as a severe test for the world champion. To save the match, Ju Wenjun will not make do with a creative opening idea only - she rather needs to go back to her former level of play. However, will the world champion manage to put problems to the challenger who is on an incredible rise in the match of her life? We are in for a tense and exciting finale of the match!

I have to say goodbye to you with my reports as I am leaving for a tournament in Gibraltar. However, this is not the end of it, and I hope that the final news will be dedicated to the challenger’s historic victory! Good luck, Aleksandra!