Sochi, the sea, the charming hotel Zhemchuzhina — what a good mix! The participants are posting happy weekend pictures on their social network accounts. We may even claim that the Black Sea coast is a sort of appeasement territory that keeps its residents well away from any pandemic news heard on TV broadcasts. A promising young chess player Dinara Dordzhieva is celebrating her newly awarded WGM title. I sincerely congratulate Dinara and I hope that this event has been celebrated on a grand scale!

On the other hand, WGM Tatjana Vasilevich has abandoned the tournament over her father's death. My condolences go to Tatiana; this is a terrible misfortune. All in all, this round has proved somewhat fatal for a powerful delegation of Crimean athletes. Oksana Gritsaeva lost her game, and Margarita Potapova's game was a real drama.

They say that the Crimean women's team's coach is a local master armed with a supercomputer. His hardware is allegedly so unique that its cost equals that of the annual budget of Feodosia. He allegedly operates from a sports camp in Primorye, sending his trainees necessary home analyses and novelties from there. After 1.е4 e5 they would usually employ 2.Kf3, although Sveshnikov claims that 2.c3! is a must. Some chess romantics even probe into 2.Nc3 here. As for the Crimean supercomputer calculating as deep as move 60, it raises objections in that the strongest move is actually 2.g3!

Margarita's opponent Daria Charochkina is also very creative about the opening part of the chess game. Not only does she resort to supercomputer analyses, but she looks into all sorts of interesting books as well. Charochkina came prepared for the last-year Superfinal with analyses from a kind of dissident book on Trompovsky, trendy in the West but utterly unknown in Russia. She won several crucial games and eventually demonstrated an excellent result.

In a clash of unorthodox approaches, the success sided with Rita first. Potapova was confidently following the multiprocessor monster analysis and was clearly for choice. 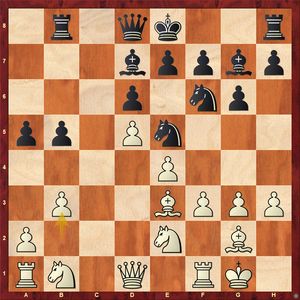 White has grabbed the center and is clearly better, so Dasha decided to resort to unorthodox measures.

Valentina Gunina has suffered her first failure at the hands of Leia Garifullina. 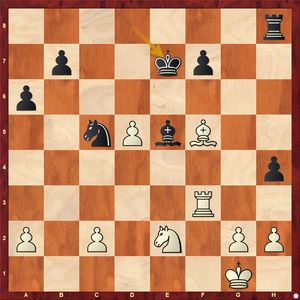 She urgently needed to take safety measures with 29.cb ab 30.g3 to trade as much material as possible to make a draw. What is the purpose of the rook on f5 in the first place?

As a result, the many-time national champion's army has bogged down on the kingside, and it is not clear who will deal with the dangerous passed pawn of Black's. 32.Rh5 Ra8 33.R:h4 R:a2. 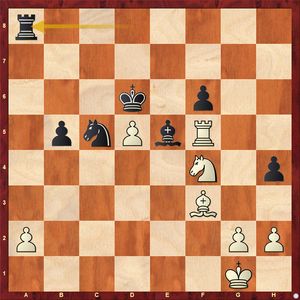 Supported by the pieces, the passed pawn crawls to the queening square, and you can't help but recall Nimzowitsch's endgame motto, "Rally your forces and move forward!”

As a result, Gunina and Garifullina are now sharing the first place with Marina Guseva. As far as I know, there has taken place the election of the Deputies Council head of Fryazino, but Marina Guseva was remotely keeping everything under control, and her candidate from the Communist party has won. A no less noteworthy story happened as the round was underway.

A long time ago, my blog published the article "Radjabov's Bishop, Fedorov's Knight," which, in particular, highlighted the Zakharov – Salinnikov game in which White had his bishop stalemated on h2 and g1 squares but ended up winning the game anyway. Alexander Zakharov is a Soviet master, famous coach, a man of the highest culture and fantastic sense of humor who has recently celebrated his 77th birthday. About 15 years ago, one of his favorite students asked him, "Alexander Ivanovich, how did you end up with such a terrible bishop?" Zakharov instantly reacted, "Dmitry, a person that studied Marx with Engels will definitely know what to do with the h2-bishop!"

When I looked at Marina's game, I realized that the master was right, as usual. 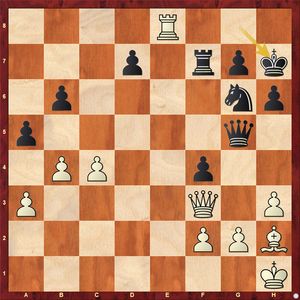 A chess player of the Vladimir city was meticulous about "walling in" of the white bishop for the entire game, but we already know something about those allegedly bad bishops…

Once again, the bishop's self-isolation is the strongest solution.

In the open tournament, there has taken yet another duel in the trendy opening setup arising after 1.e4 e5 2.Nf3 Nf6 3.Nc3 Nc6. As we know, the old theory used to highlight 4. Bb5, 4.d4 and even 4.g3 in this position. However, from the modern theory point of view, 4.Rb1 (Moiseenko–Kobalia, 2017), 4.a3 (Caruana–Aronian, 2018), or 4.a4 (Paravyan-Korotylev, 2017) deserve attention here and might lead to the famous Carlsen-Radjabov game (1.a4!?, 2012) via a transposition of moves. They say that a legendary coach Vladimir Tukmakov analyzed 4.Bd3 at the training session with the team Belarus. This is not to mention Alexander Grischuk's brainchild 4.Be2.

Maksim Chigaev opted for 4.h3 against Aleksandr Rakhmanov. Needless to say, the move is quite relevant and poisonous, which its so frequent appearances in the elite games testify to. 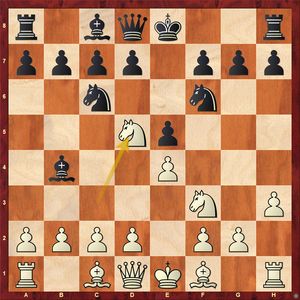 Rakhmanov boldly grabs the central pawn, not to mention that this approach has always been considered risky in the line 4.Be2 Bb4 5.Kd5 Ba5 6.c3. It has been met in Alexander Morozevich's games, as well as in Carlsen vs. Le Quang Liem via the transposition of moves: 6...0–0 7.b4 Bb6 8.N:b6 ab 9.d3 d5 10.Qc2 – and White pins his hopes on the bishop pair.

The straightforward 8.de is also good, but Chigaev is not a person to back out of complications. 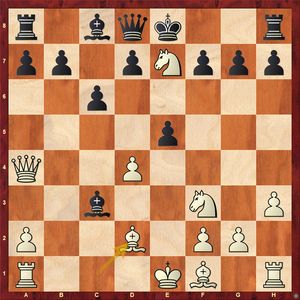 it is easier for White with queens on the board after 15...d5 16.Qd4 as he can mount threats against the black king, while the pawns are likely to have their say later in the endgame. Therefore, the focus on exchanging queens is correct. 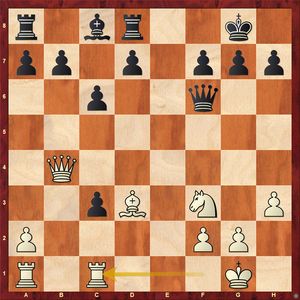 Tougher is 17...b6!? 18.Q:c3 Q:c3 19.R:c3 Bb7 so as not to saddle oneself with more weaknesses. The white knight is definitely superior to the pawns, but White would have faced more complex problems compared to those in the game.

Black runs the risk of losing his a4-pawn after 22...d5 23.Rd4, and the attempt to keep it alive led to grave repercussions for the entire pawn chain.

Not even Karl Marx could have cured this bishop.

Mikhail Antipov, Maksim's teammate from the Molodezhka super club has also joined the tournament lead with 4 out of 5. The Moscow champion has again achieved success in his trademark style that is known to give his opponent's king hard time until the end of the game. 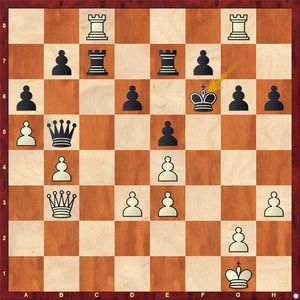 How is White supposed to get to the black monarch? There is no decisive check in sight despite the king's extremely exposed situation on f6.

Missing the last opportunity to play 40...Qc6, and when the time control was over, Antipov had no problems prosecuting hie advantage with a final blow. 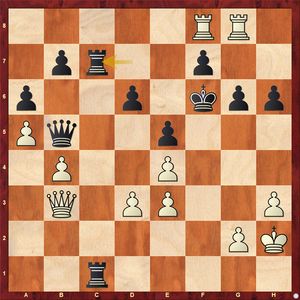 The pursuers keep a tight group with as many as eight grandmasters trailing half a point behind. 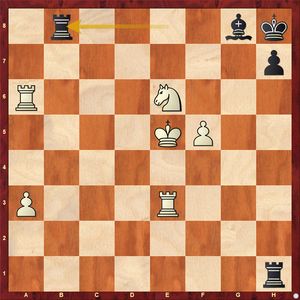 The rating favorite Vladislav Artemiev has also joined the +2 group. 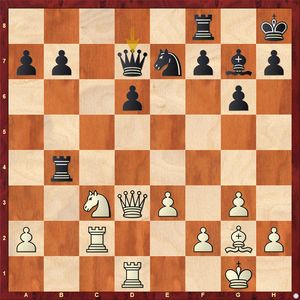 Black is up a pawn, but white's pieces are active.

There is no taking the pawn back: after 23.Q:d6? Q:d6 24.R:d6 Rc8 Black generates a dangerous attack. However, White aims at taking control over all central squares first and take the material back afterwards. 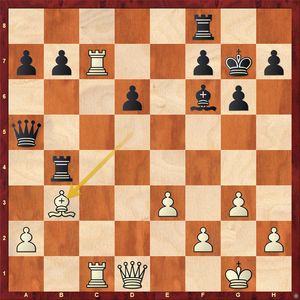 Black must have blundered something in the heat of battle because it is otherwise impossible to explain his giving up two pawns at one go instead of 28...Qb5.

Now it is White with the extra material, and his pressure against f7 seals the fate of the game.

44.R:f8 1–0 Black's army is defeated, and Artemiev's powerful bishop is number one hero.

There is nothing doing without rook and bishop vs. rook endgame, which is also a convenient way to wrap up this report. They have recently calculated that only a reporter named Kryakvin has contributed to the CFR (RCF) website with as many as 124 articles dedicated to this endgame. However, people keep losing them, because chess has never been a simple game. 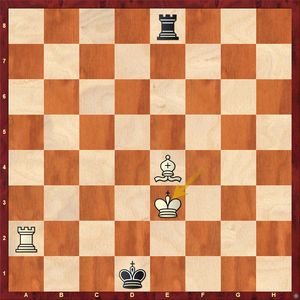 Black has covered 20 moves, with 30 more to make the draw deadline. Although his king has been edged out to the homerank, a draw is still within reach after - 116...Rc8! 117.Ra5 Kc1 118.Rb5 Kd1. Alas, the blunder does not allow even as much as the Philidor position to Black as the strongest side wins by the simple shift of his rook between the flanks.

The fight will resume with renewed vigor after the weekend. See you again after round seven! Take care of yourself!