Eteri Kublashvili is exploring the common ground between two sports

The end of December will see the King Salman World Rapid and Blitz Championships take place at the VIP zone of the Luzhniki Stadium. A year ago, Moscow was one of the cities hosting the impressive FIFA World Cup, and Luzhniki was a top-of-the-line stadium.

This legendary playground witnessed the opening match Russia - Saudi Arabia, saw Cristiano Ronaldo score for Portugal, France fail to outplay Denmark. This is where an invincible Germany did go down, Russia outperformed Spain in a penalty shootout, and Croatia, led by Modric and Rakitic, defeated England and reached the final only to go down to France (again in Luzhniki!). The French were triumphing that day, and football fans and spectators will never forget the summer downpour sweeping Moscow that day.

Head of the 2018 FIFA World Cup Organizing Committee, Arkady Dvorkovich was just taking first steps with his FIDE Presidential campaign. FIFA President Gianni Infantino praised the way the Russian championship was managed, and a few months later, going into the Batumi elections, recorded a video message in support of the future FIDE President.


A big football event featuring football stars was organized as part of Arkady Dvorkovich's campaign, them being: Dmitri Sychev, Dmitri Bulykin, Florent Malouda, Clarence Seedorf, Kakha Kaladze. Visiting the event were grandmasters Evgeny Najer, Vladimir Potkin, Pavel Tregubov, Sergei Rublevsky, Alexandra Kosteniuk, Olga Girya, Natalija Pogonina, and many others. Some GMs were participating, and others yet were watching the battles and cheering for their favorites.

Despite substantial differences between football and chess, these two sports still share a lot in common. This is not only about strategy and tactics inherent to almost any sport but about people as well. While many outstanding representatives of football are not indifferent to chess, plenty of grandmasters have been noted for their passion and even love of the number one team game of all time.

The already mentioned Dmitri Sychev and Dmitri Bulykin took great interest in watching the Russian teams play at the 2018 Chess Olympiad and even faced each other over the chessboard ... in a raw-hide tent.

In May 2019, Dmitri Bulykin was asked to make a symbolic first move at the FIDE Grand Prix leg in Moscow.


However, let us go a few decades back to when the ties between football and chess players were even stronger. A legendary goalkeeper Lev Yashin was fond of basketball, chess, and fencing. The passion for chess manifested in him at an early age. An admirer of Mikhail Botvinnik, a young Yashin even cherished ambition of becoming his successor. Later on, the experience of playing chess gave him a better insight into the opponent’s moves on the football field.

The 9th world champion Tigran Petrosian was known to be a passionate fan of Spartak and a great connoisseur of football in general. They say he would eagerly draw the game for the sake of not missing the match of his beloved team.

The pictures showing the 13th world champion Garry Kasparov on the football field are surely familiar to every chess beginner. 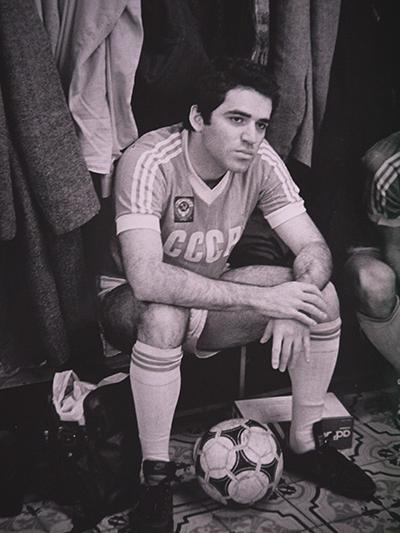 An invariably ingenious David Bronstein believed "the game of football to be richer in mental content than chess.”

Passion for football is also very much alive with a celebrated Nona Gaprindashvili, who watches nearly all major matches and is eager to discuss them in detail with anyone anytime. Speaking about Georgian athletes, I would like to note that a Dinamo Tbilisi player and a USSR national team player Manuchar Machaidze used to play chess in his youth and even participated in the capital city’s championship.

“Back in my time, I advanced as far as making a candidate master norm. I have been playing from time to time, even if more with the chess engine as of lately. I knew Petrosian, Tal, and spent time in Spassky’s company. I know Karpov and Kasparov. It goes without saying that I know well our Georgian players Giorgadze and Azmaiparashvili. Nona Gaprindashvili is a friend of mine. I am also on friendly terms with other great national athletes - Nana Alexandria, Nana Ioseliani, Nino Gurieli ... You see, I am not a stranger to the circle of chess players, said the footballer in an interview to the RCF website given at the 2017 World Cup in Tbilisi.

A famous football player, a merited USSR coach Anatoliy Byshovets was a regular visitor to the Anand - Gelfand match staged at the Tretyakov Gallery in Moscow.

Boris Gelfand is an ardent football addict rooting for Barcelona. After winning the 2011 Kazan World Candidates, the Israeli grandmaster was presented with tickets for the match of his favorite team!

Conversely, Magnus Carlsen is a devotee of Barcelona’s eternal rival - Real Madrid. The world champion outdid Boris in that not only does he attend matches from time to time, but he was once invited to make a symbolic kick-off for his favorite team. 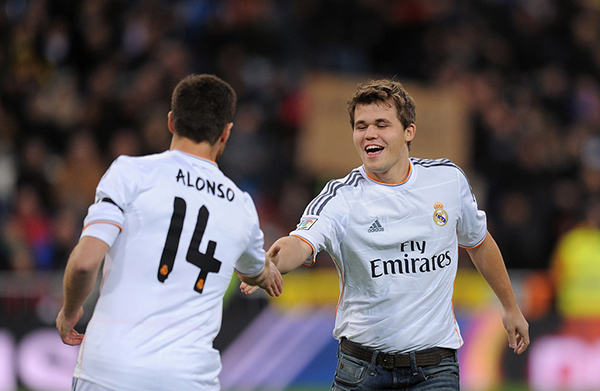 The Norwegian loves to play football himself and is sometimes seen kicking the ball in between the games. The pictures of a barefoot grandmaster taken at the Grand Chess Tour in Kolkata turned into a viral content across the net in no time at all. It is no mere coincidence that one of Magnus’s first coaches, GM Simen Agdestein, used to be a member of not the Norwegian chess team only, but also of the football one as well!

Carlsen is a regular participant in the football events at the super tournament in Shamkir. In this endeavor, the champion is eagerly supported by Peter Heine Nielsen, Denis Khismatullin, Shakhriyar Mamedyarov, Alexander Grischuk, Veselin Topalov, and others. Even a delicate Ding Liren was spotted at the football field.

Always thirsty for victories, football gives our brutal champion plenty of opportunities to spill out his emotions, which is a difficult thing to do over the chessboard.


Magnus Carlsen is known to have played exhibition games not only with Bill Gates and Mark Zuckerberg but also with Trent Alexander-Arnold, Liverpool’s right-back. 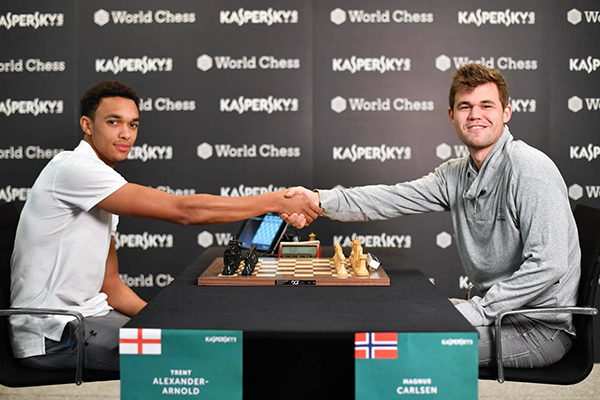 
The most ardent Russian football aficionado among chess players are Ian Nepomniachtchi, Evgeny Tomashevsky, Sergey Karjakin, and, needless to say, Nikita Vitiugov. The latter's comments on Twitter have become an invariable attribute accompanying virtually every major football match. This is how Nikita answered one of the questions from the German chess magazine Schach:

– Which person would you happily trade your fates with for a single day, and why?

- It would be interesting to find yourself in the shoes of a football player going out for one of the return playoff matches of the Champions League.

This said, female chess players are no lesser fans of football too. Chess enthusiasts could not turn a blind eye on the photo session with Almira Skripchenko dressed in a football uniform as part of the advertisement campaign for Chess Bundesliga. 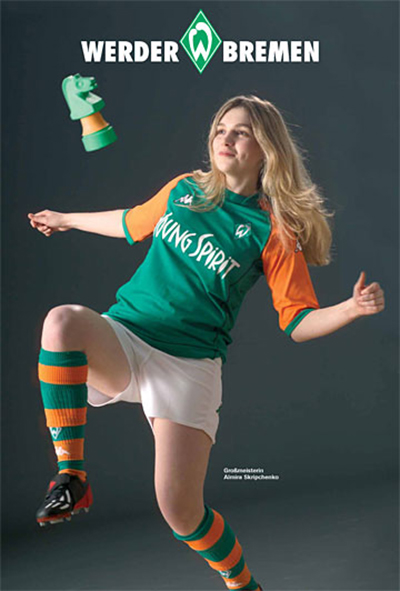 The Russian team championship in Sochi always sees the women's team fight recklessly at the playground on the rest day.

Moreover, football coaches consider it not amiss to apply chess skills to football. So, Pep Guardiola claims chess to be of help in working out new strategies and tactics. The Spanish journalist Marty Perarnau wrote in one of his books that the Manchester City coach was interested in Magnus Carlsen's approach to the openings, among other things. 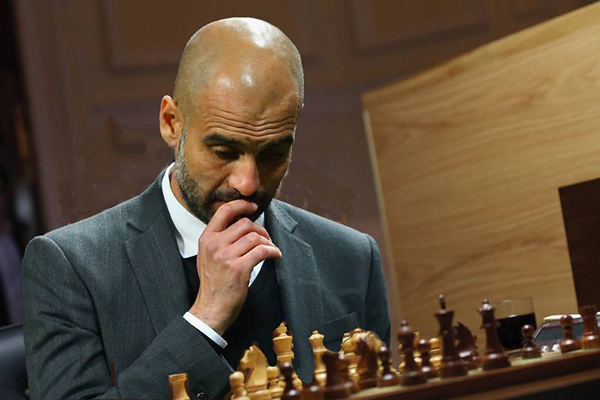 A former coach of the Russian national team Fabio Capello is also of the belief that football and chess share something in common. “In football and chess, a lot depends on the quality of a player or piece at your disposal, as well as their correct formation. Winning the match always requires coming up with something unexpected for the opponent,” said he in one of his interviews.


There is a reason behind the managers of FC Zenit turning their attention to chess. The club collaborates with the St. Petersburg Chess Federation as they jointly hold tournaments, simuls, and meetings of grandmasters with the students of Gazprom Academy. Young football players attempt to get at the logic of what is happening on the green lawn by applying chess principles, learning to analyze the situation and thinking strategically.


December 1 was the first time in the history of the Russian Premier League that Gazprom-Arena welcomed a friendly chess matchup between the admirers of FC Zenit and FC Spartak. The home team was headed by Maxim Matlakov and Kirill Alekseenko, and the Muscovites - by Ian Nepomniachtchi and Evgeny Tomashevsky. Besides, sitting at the chess boards that day were Alexander Zhukov, the Russian Federation's First Deputy Chairman of the State Duma of the Federal Assembly, Sergey Lazarev, President of the Moscow Chess Federation, GM and journalist Elmira Mirzoeva and others.

While the chess contest ended in the Moscow team’s favor, celebrating at the football field was the home team. However, it was very hot in St. Petersburg that evening. 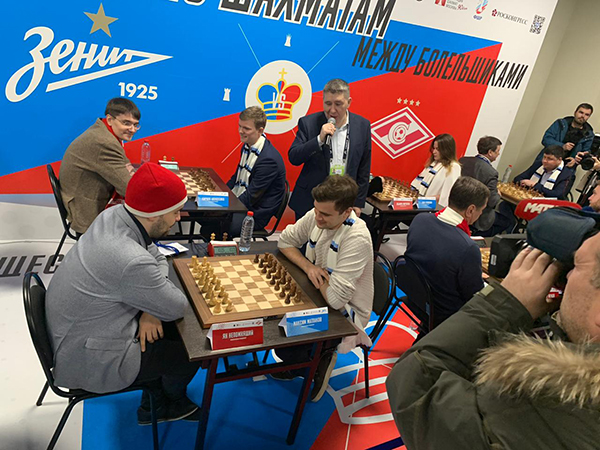 
A businessman Sergey Galitsky is fond of both football and chess. A Russian billionaire is a candidate chess master who gives simuls to the students of football academy of his football club Krasnodar on a regular basis.

A careful study of the topic gives you the conclusion that chess has a lot in common with football, while modern technical innovations and social networks help bring them even closer.

Staged within the walls of the legendary stadium, the King Salman World Rapid and Blitz Championships - the most exciting and dynamic genres of chess - promise to turn into a theatrical show for all fans who can watch the battles both live and online. Here you will see high passions and the struggle of characters, as in any landmark football match, and the one with higher stamina, speed and pressure is going to be the one winning the game. Looking forward to seeing you in Luzhniki from 25 to 30 December! 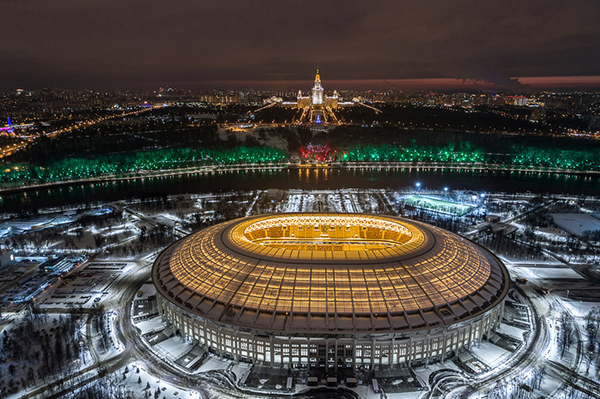