It is usually hard to have the material structured when writing about events taking place in more than one round. But I will do my best. In rounds four and five, the players kept playing solid chess, demonstrating their sound opening preparation and skills in defending slightly worse positions. The only exception to the rule, Valentina Gunina managed to grind out draws in positions that any other player would be more than willing to resign. However, there is no containing the simmering steam indefinitely, and round six gave us as many as five decisive games. However, first things first.

There are draws and draws, as they say. 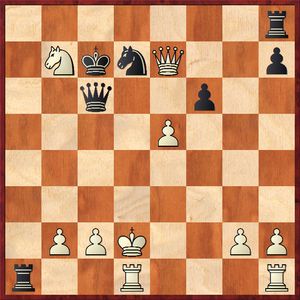 A leader is known to be always on the business end of hardships. Severe challenges were in store for Valentina Gunina as well. 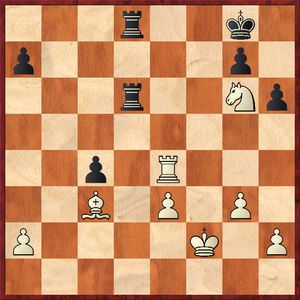 A solid and sound 51.Ne2 is a step backward, while 51.Ne6 Re8 52.Nxg5 Rxe4 53.Nxe4 Ra6 was not to Cramling's liking as she was unwilling to give up the a2-pawn. Cramling is trying to weave a mating net around the black king, but Gunina’s rooks are taking care of it.

Meanwhile, Gunina tries to clear the way for her passed c-pawn, which, coupled with time trouble, compelled Cramling to think better about taking a bird in the hand. 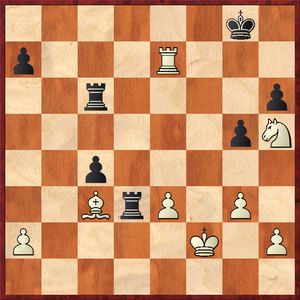 However, this adventure was peanuts compared to what happened in the next round. 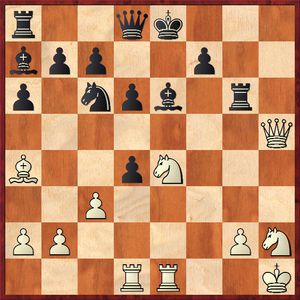 Having been caught off guard, White quickly found herself in a hopeless position. The following Stefanova’s excellent move opens avenues for the major pieces towards the h-file. 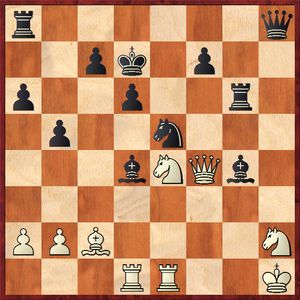 It looks like a nightmare for White! White is down so many pawns, his king being in grave danger at that. However, this is time for Gunina's magic. 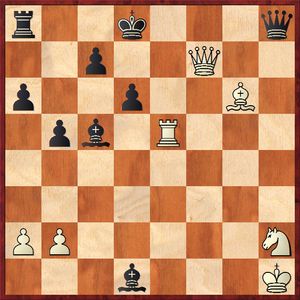 Alas, much to the public's grief, its favorite did go down in round six. Besides, this time the wind seemed to blow in Gunina's sails, who proved well prepared in the opening and uncorked a valuable improvement. 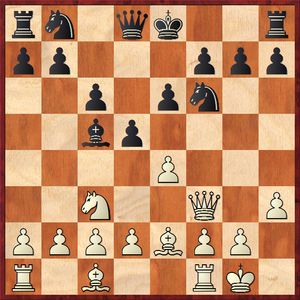 A cunning ambush! The queen is eyeballing the d4-bishop, and if challenged by the e6-pawn, it switches to attacking the g7-square.

Nevertheless, Gunina is on alert with the improvement for Black. 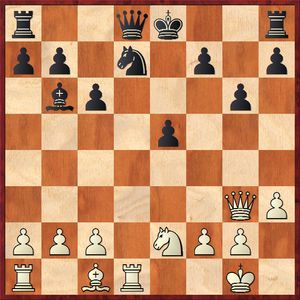 How is White supposed to go about the attack now? There is nothing to gain from 16.Nc3 Qe7 17.Ne4 0–0–0, which compelled Paehtz to sacrifice the exchange after a long thought. 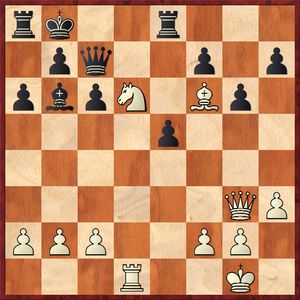 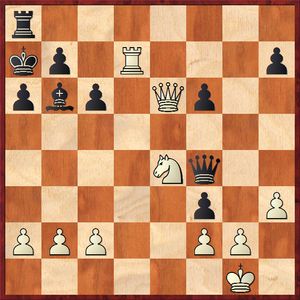 Or 30...Kc7 31.Qe7+ Kb8 32.Qb7#. Black ends up dropping the strongest piece, and the German player goes on to press her edge home with energetic play.

White manages to avoid the checkmate at the cost of all her pawns.

Despite Gunina's failure, the Russian cohort has taken a wide step forward. 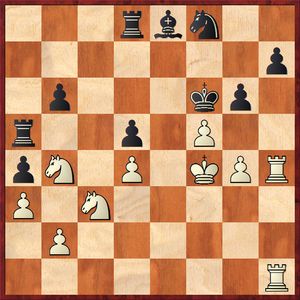 White seems to be winning in an unlimited number of ways, but attains the goal most spectacularly.

The tactical sequence has given White the material preponderance, and the attack is ongoing.

39.Nxd5+, and Black could have resigned here and now. 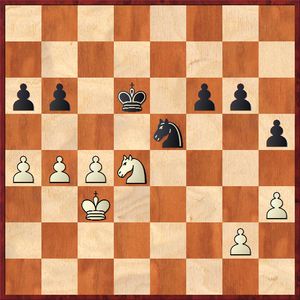 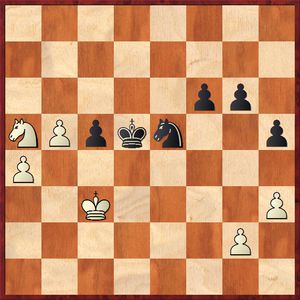 Now White has two remote passers. Suggesting itself is 40.Nb7 Nc4 41.a5, but Kashlinskaya opts for another path to victory.

Although Black has managed to engineer a sort of blockade, it is doomed. 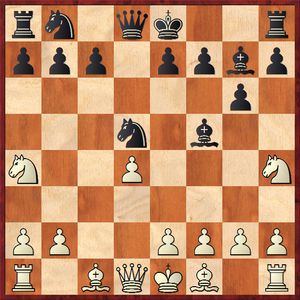 Lagno tucks her bishop as far away as possible, which is not a solution to her opening problems though.

Black goes for a risky decision to take the central pawn at the cost of castling. 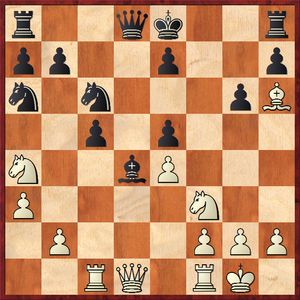 It is the most opportune moment to take care of the Black's king uncastled position with: 16.Qb3! Qd7 17.Bg7 0–0–0 18.Bxh8 Rxh8 19.Rfd1 with a slight material superiority and good position. Stefanova rushes to cash in.

The endgame is equal, which is seen, for example, after 20.f3 Rhd8 21.Rdd5; however, regretting a missed opening edge, the Bulgarian GM starts lashing out with pseudoactive moves.

Taking the last step into the abyss. 23.Kf2 should have been played instead. 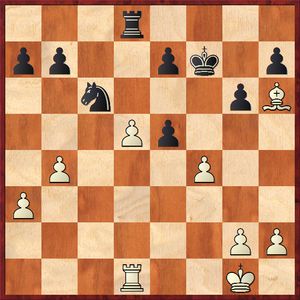 The white pawns are weak, and Lagno has an easy time collecting a large harvest.

The trade of rooks gives White an extremely grim-looking endgame.

Black has the penultimate rank taken care of - 28.Rc7 Rd7.

The passed pawn rushes towards the queening square, while the doomed e5-pawn does a poor job of standing in the way of own bishop.

A spectacular victory was scored by the world title challenger, who showed her deep insight into the Benoni-type of positions as White. 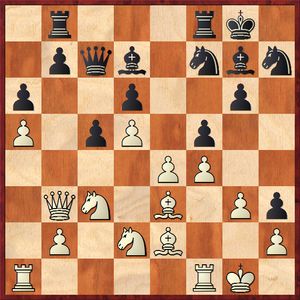 This is giving White a free hand for the queenside operations.  Anyone familiar with the legacy of Pavel Ponkratov and Vugar Gashimov will be at ease with sacrificing the exchange: 23...exf4! 24.Bxf4 Bd4+ 25.Kh1 Qd8 26.Bxb8 Qxb8 27.Qb6 Nf6, not allowing the opponent to seize the initiative. 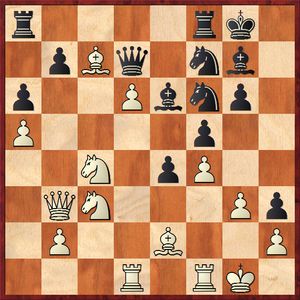 White has infiltrated the black camp with all his pieces, and the routine trade of queens results in destroying the Indian player’s position. 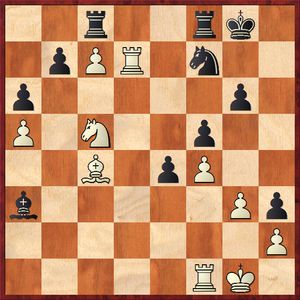 Either 37.Nxb7 or 37.Ne6 is winning, but Goryachkina opts for a long and forced line that gives her an extra knight.

This is a final touch as the knight runs away with checks.

It's a pity that Alexandra Kosteniuk failed to bring her strategic masterpiece to a logical conclusion, walking into the last-minute trap set by her stubborn opponent. 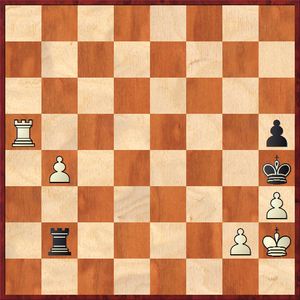 White is up two pawns, but Black is active. Meanwhile, White should be on the alert for many a drawn positions lurking behind the corner. The Russian player's reasoning of trading her passed pawn for the opponent’s rook pawn was correct, but the idea’s execution failed her. This said, 45.Rb5? Rxg2+! is an immediate draw.

Aleksandra Goryachkina and Kateryna Lagno are sharing second with Humpy Koneru (with 4 out of 6), while Valentina Gunina is in the share of fifth with her offender Elisabeth Paehtz. However, the reigning world champion is not in the idle mode - Ju Wenjun has won two more games and is now in the clear first place with 4.5. 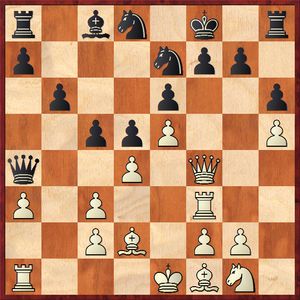 As opposed to it, Alina went for it by capturing the c2-pawn.

“White needs to complete his development, and then the h8-rook is going to be Black's undoing (S.Shipov). 18.Ne2 fits this wise thought of the main commentator more than anything else.

Missing a brilliant opportunity 18...Ra4! 19.Rb4 Qa1+ to put up fight to yet underdeveloped army of White.

An interesting practical opportunity - the Russian is going to sac the queen. After 21...Qa5 22.c4 Qc7 23.Bb4 dxc4 24.Be4 the misplaced h8-rook, mentioned by Shipov, has no say against the increasing White’s offensive. 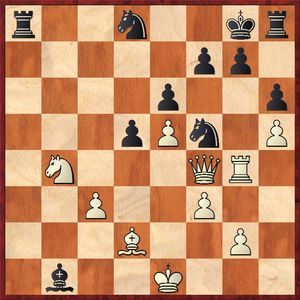 With White having a substantial superiority at the critical part of the board, the world champion launches an attack without delay.

32...Bc4 33.gxh6 is no better than that, and Ju Wenjun sacrifices the exchange to carry out a decisive breakthrough.

Is there any Russian player to stop the unbeatable Chinese? I am looking forward to it! The next round has the world champion pitted against Valentina Gunina. There is yet a lot of fight ahead of us with only half a tournament behind!