The pre-start press conference and drawing of lots were held. 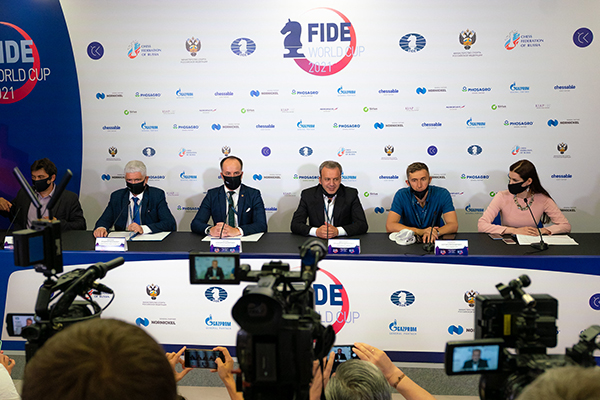 In total, 206 players, including the World Champion Magnus Carlsen (Norway), will play in the Open Section, while 103 players will take part in the Women's section.

“The World Cup is one of the most significant events on the chess calendar and is very attractive for the spectators thanks to its knock-out formula. In order to minimize the organizational risks, we decided to unify the Open Section with the Women's Section – all games will be played at the same time and place.

Please notice that the first Women's World Cup was originally supposed to take place in 2020 in Minsk, but we had to reschedule it because our partners from Belarus retracted their offer.

On behalf of FIDE, I would like to thank the Government of Russia, the Ministry of Sport of Russia, the Krasnodar Krai, and our reliable sponsors – Gazprom, Norilsk Nickel, Phosagro, Rosatom and others for their support and invaluable help in organizing chess competitions. I think we made a correct decision not cancelling these tournaments despite all the obstacles of the global pandemic and a rather limited amount of preparation time.

The players have been missing real chess, classical chess, over the board chess. As we can see, almost all the players who qualified for the World Cup, arrived in Sochi, and our brilliant team is successfully handling all the organizational issues.”

The Minister of Physical Culture and Sport of the Krasnodar Krai, Alexey Chernov, focused on the high-level chess events that have been organized in the region:

“We are grateful to the International Chess Federation for this opportunity to demonstrate the beauty of our land. We have experience, venues, and people capable of carrying out the highest-level competitions. Major events such as the World Cup are very important for us as they promote our region and assist local chess development.

Almost 10,000 children of the Krasnodar Krai are studying chess these days. The competition in local chess events is fierce. Our players regularly give their opponents trouble in all-Russian events.”

The Deputy Head of the City of Sochi Vladimir Morozov gave an account of chess activity in the city:

“In Sochi, chess is very popular both among children and adults. 675 students are studying chess free of charge at the sports school #11, which is been active since 2002. 12 highly qualified coaches, some of them are masters of sport, give lessons in all districts of our vast city. The school graduates are successfully representing Sochi in various competitions, and some of them have joined the ranks of the Krasnodar Krai and the Russian Junior teams.

The Chess at Schools project is being implemented in 66 regular schools of Sochi, involving nearly 9,000 students. We are also running the Sochi Longevity project, with free-for-all outdoor chess areas open in the Riviera and the Bestuzhevo parks on Saturdays. The AquaLoo resort and the Grand Hotel Zhemchuzhina are popular venues of major regional, all-Russian, and international chess events.

Chess is loved passionately in Sochi, and we are always happy to welcome chess enthusiasts and professionals from all over the world!”

The Executive Director of the Chess Federation of Russia Mark Glukhovsky, highlighted the strict measures that have been taken for the safety of the players:

“This is an unusual tournament as it takes place during the pandemic, which limits public access to the event. Our main priority is the safety of the players, and this is why we have separated a clean zone from the other areas. The players have to follow a very strict medical protocol and they must be separated from the public. Unfortunately, spectators will be unable to take photos with their favourite players or talk to them.

However, we will do everything possible to make our spectators comfortable at the event. A special area designated for the spectators has been prepared on the second floor of the Galaxy Entertainment Centre: everyone can go there and listen to expert chess commentary in Russian or English.

I would like to add that the Chess Federation of Russia started a big project called the Black Sea Grand Prix this year. Four chess festivals were organized within the frames of this project, and the fifth festival will take place in Krasnaya Polyana. It’s going to be open to local players, and the World Cup participants who may unfortunately be eliminated from the main event are welcome to play there as well.

The Educational Centre Sirius is located near Krasnaya Polyana, in the Imereti Valley, and it features a chess department supported by CFR. We have prepared some events specially for the chess students of the Sirius: some of them will perhaps be able to visit the Galaxy, and some grandmasters will give their master classes in the Sirius.”

Finally, top Russian Grandmaster, World Champion candidate and 2015 World Cup winner Sergey Karjakin gave his advice on how to win, and the importance of luck in the outcome:

“Knockout chess has no secret; you just have to play chess and believe in your chances. The World Cup that I won was not going smoothly for me at all: on several occasions I was forced to win on demand, and I faced many difficult positions. Of course, it’s impossible to win such a tournament without being lucky at some point. However, you also need to play your best all the time in order to earn this luck.

I trained hard for the coming tournament, both at the board and in the gym. I hope to show my best chess while I enjoy playing the event. Frankly, I miss normal chess – it has been more than half a year since my latest live event.”

A drawing of lots took place during the press-conference: FIDE President Arkady Dvorkovich determined the colours for the Open Section, while Sergey Karjakin did the same for the Women's Section. Players with odd numbers in the starting list will play with White in both sections. The games start Monday, July 12th at 15.00.

Arkady Dvorkovich also took some questions from the press:

“Zonal tournaments - qualifying tournaments to the World Cup - were carried out everywhere, albeit in different formats. Everyone wanted to be here; the only players that are missing are those from countries that have closed their borders, such as Vietnam. There were some problems with China, although a few Chinese players have managed to arrive, likewise with New Zealand and Turkmenistan. We have taken unprecedented steps aiming at aligning all the medical protocols, obtaining necessary permits, and visa support. In general, we made everything work.”

Mark Glukhovsky added that all the strongest Russian players are playing in the World Cup, except for Ian Nepomniachtchi, who is preparing for the most important test of his life – the World Championship match against Magnus Carlsen, which will take place in Dubai (UAE) in November-December this year.

Andrey Guryev, CEO of PhosAgro and Vice-President of CFR and also Member of the CFR Supervisory Board, sent a message to the participants of the World Cup:

“The FIDE World Cup in Sochi brings together more than 300 of the world's strongest male and female players. For the first time since the start of the pandemic, we are witnessing a major event held in a regular format. We are looking forward to four weeks of fierce and exciting competition. I believe it will be great entertainment for all of the chess enthusiasts and will facilitate their own chess progress.”

An opening ceremony followed by the technical meeting with the players was held in the evening, after the press conference.  The Minister of Physical Culture and Sport of the Krasnodar Krai Alexey Chernov, the Deputy Head of the City of Sochi Vladimir Morozov and the Executive Director of the Chess Federation of Russia Mark Glukhovsky spoke at the opening ceremony.

Subsequently, Chief Arbiter IA Laurent Freyd (from France) held a technical meeting with the players, in which he thoroughly explained the main rules and regulations of the event and reminded the participants about the demands of the medical protocol.

The first round of the Open and Women's Sections will start on Monday, July 12, at 3 pm Moscow time. 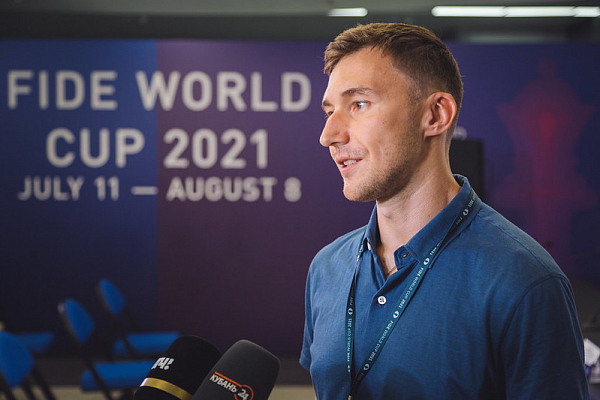 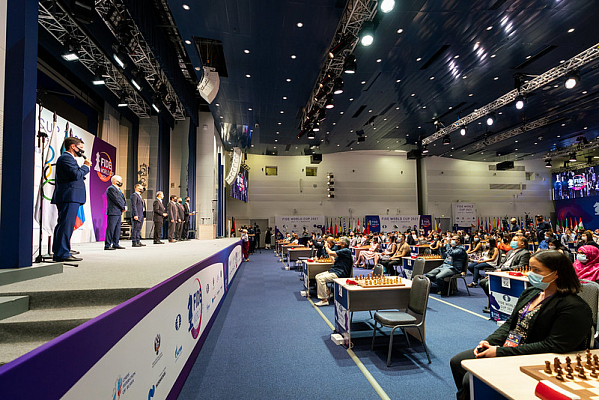 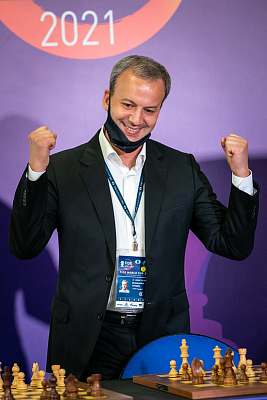 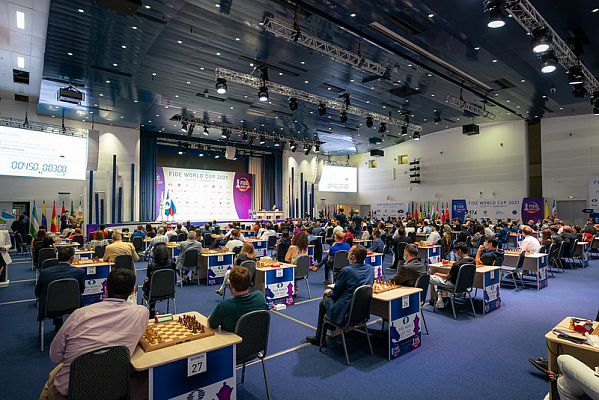 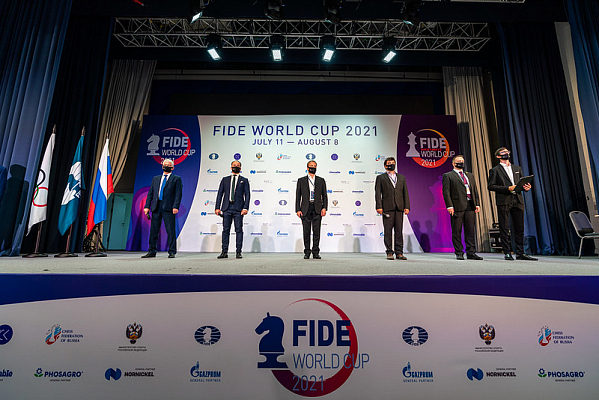 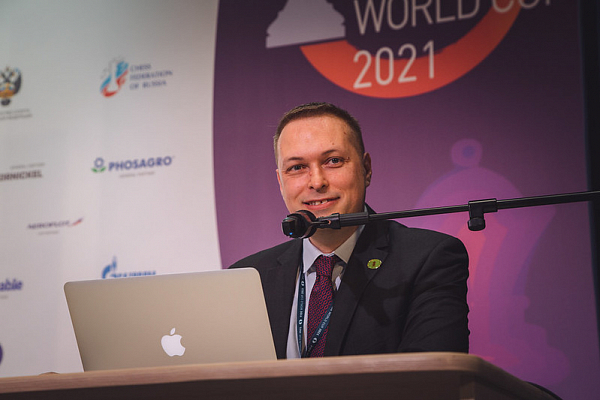 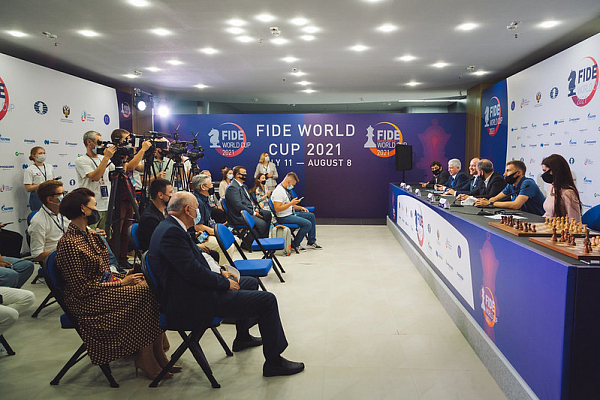 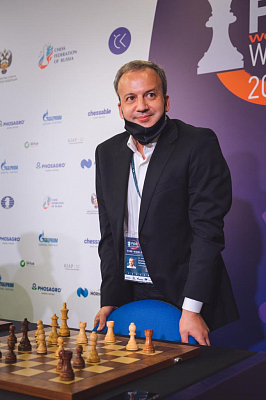 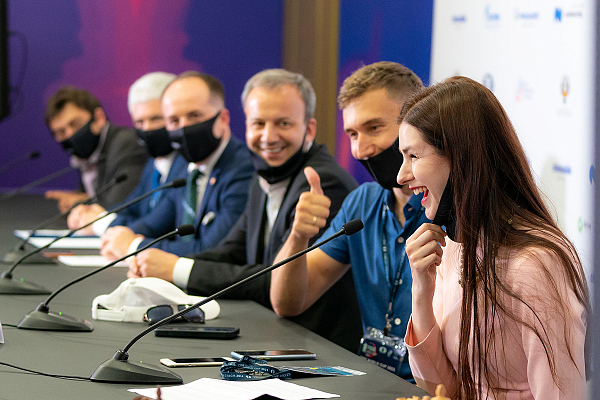