First Qualifiers into Round Six of FIDE World Cups Defined 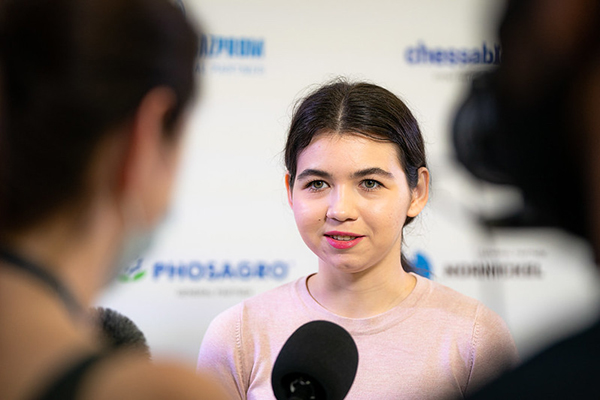 Monday July 26, return games of round five of FIDE World Open and Women’s Cups (Finals 8 and 4, respectively) finished in Sochi.

Sam Shankland (USA) vs. Peter Svidler (Russia) played out a little-studied line of the King's Indian Defense with the early h2-h4. Svidler sacrificed two pawns for the initiative, and some double-edged struggle rich in calculation ensued in the position featuring opposite-side castling. Shankland gave back the extra material to open the rook file and create counter threats against the black king. In a dynamic equilibrium position, the cost of each move was extremely high, and Black was immediately punished for his fatal error. The Russian player resigned on move 30.

Playing White against Santosh Vidit (India), the Azeri GM Vasif Durarbayli misplayed the opening so that his light-squared bishop (White’s most valuable piece in Ruy Lopez) was stuck on the b1-square, walled up by his own c2-pawn. The prisoner never broke free and died in chains. Vidit won the match 1.5:0.5 and qualified into the quarterfinal.

Table one, Andrey Esipenko (Russia) and Magnus Carlsen (Norway), drew their game. In a calm line of Giuoco Piano, White got two bishops, but this edge was purely symbolic. The world champion regrouped his forces to his advantage, nipping his opponent’s active ideas in the bud. The game ended in a draw by repetition.

Jan-Krzysztof Duda (Poland) – Alexander Grischuk (Russia) and Sergey Karjakin (Russia) – Maxime Vachier-Lagrave (France) also ended in repetition. Sergey and Maxim stayed no more than 10 minutes over the board: having probed his opponent's opening preparation, Karjakin chose to call it a day and shift the brunt of the battle into a tie-breaker.

Both games of Etienne Bacrot (France) – Kacper Piorun (Poland) (Poland) and Velimir Ivic (Serbia) – Vladimir Fedoseev (Russia) ended in a draw. Iranian grandmaster M. Amin Tabatabaei defeated Haik Martirosyan (Armenia) as Black and equalized the match score. Martirosyan was fighting back from his slightly inferior position for a long time until he erred by exchanging knights on move 58, and the pawn ending became lost for him.

In the women’s tournament, the Russian Aleksandra Goryachkina defeated Dinara Saduakassova (Kazakhstan) in game two to win the match 1.5:0.5. The Kazakh player made a one-move blunder in an inferior position and resigned.

Playing White, Kateryna Lagno gained a comfortable edge over ex-world champion Tan Zhongyi (China) out of the opening. However, the Russian player lost the game thread and allowed her opponent to mount an irresistible attack against her king. As a result, Tan wins the match 1.5:0.5.

In the Russian derby, Valentina Gunina – Alexandra Kosteniuk, the former needed only a victory to level the match score. However, she mishandled the opening and remained down a pawn and short on time. White managed to muddy the waters and create counter chances, which were good enough only to maintain balance. The attempts to achieve more allowed Kosteniuk to launch the attack and score yet another victory.

Only Anna Muzychuk (Ukraine) and Nana Dzagnidze (Georgia), drew their second time and will sort things out in the tie-breaker. The Ukrainian player is White in game one.