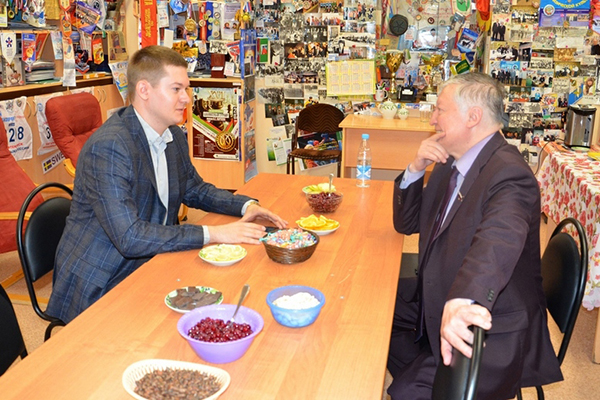 The 12th world champion, RCF Vice-President, and the member of the State Duma Anatoly Karpov gave an interview to Vasily Papin in Poikovsky. There was a question about the forthcoming FIDE elections.

- Mr. Karpov, FIDE Presidential elections are approaching. The RCF Supervisory Board supported the candidacy of Kirsan Ilyumzhinov. What is your position as the RCF Vice-President?

- I would underline – it supported but with great difficulty. There was no other candidate, that is why this decision. In principle I think that Kirsan Nikolayevich has to think and find some other occupation. Because there are problems, first of all inside his team.

- Do you mean a conflict with Mr. Makropoulos?

- Not only. Mr. Makropoulos, Mr. Vega, and Mr. Azmaiparashvili. Too many people who are against. I do not even mention the fact that the PB in Minsk voted for his resignation. Frankly, I do not recall any other occasion of PB voting 16-1. And it happened in Minsk, not in the USA. So he has not done some things correctly. In chess I understand his mistakes and failures. But that this has been understood not only by chess professionals, but by the members of his team – this is a revelation for me.

- At the RCF Congress the support was provided for two candidates: Kirsan and you.

- Eight years ago I had a mood to run, and of course that the decision was changed, of the RCF Supervisory Board to support Kirsan, it was outrageous. In all the world Russia, at least, in chess, has lost a lot. The world could not understand what had happened and how it was possible.

- Let me specify. This was the period when Arkady Dvorkovich headed the RCF, wasn’t it?

- Yes, and there was a decision. As far as I know, even there had been threats to our southern delegates. Kirsan’s representatives were pressing. And this is monstrous for chess and the chess world. But it did happen. Now, if Russia needs, I can run. But I do not need it. Now they are trying to tell me, you should go. But I am saying, if there is a need to “fill the gap”, I can do it.

- Yes (laughing). From the point of view of my activities in chess… Knock on wood, everything is successful. My schools are created, now they exist in 38 countries of the world, in nearly 50 regions of Russia. I organize tournaments, both play and organize. For today, for my chess plans, the FIDE Presidency does not fit anywhere. Moreover, everything I do, I do without FIDE. Sometimes they try to take over my things and they do.

- Kirsan also does a lot of things without FIDE. He has a Chess for Peace foundation, which actively develops chess in the world, including Africa.

- Look here. Let’s say, me and a Serbian journalist D. Bjelitsa were the creators of the World Youth Olympiad. I have organized seven first editions without any state support. Then I invited Campomanes to participate, and he said that he would if he got paid. I told him that there were no sponsors, I had found means myself, and of course, I was not going to pay. So Campo said, if  you hadn't paid (not to him, to FIDE), then we would not participate. Ok, no means no.

- I recall even the King of Spain at one of the World Youth Olympiads.

- Yes, in Las Palmas. King was the honorary President of the Organizing Committee. The last one was organized in Turkey. By ourselves. Then Kirsan joined with FIDE. I was glad that they did.

In one year, they did their own Olimpiads, and forgot about me. I decided ok, I created this tradition, it got support, wonderful. Ok I am forgotten, ok let them organize. But now the thing is getting worse and worse. And it is a pity that it happens. I think in chess correct behavior should prevail everywhere.

Again, at this Congress, Kirsan said that Russia got Chess in Schools programme because of him. I had to clarify. I am not used to brag about my achievements. But as Kirsan said that he was first everywhere, I had to say that the first chess school in Russia had been created by me. Before in the USSR there had been chess schools of Botvinnik, Polugaevsky.

But if we speak about modern Russia, then in 1988 there was a regional school in Voronezh. And I have been doing this for 30 years. Kirsan did not exist in chess at all, when we started working on this. I was White Rook President till 1986, and we revived White Rook without FIDE.

There are people who try to grab things from all tables and then say, these are their tables, when in fact the only thing they have is one chair at one table.

- Now besides Kirsan, G. Makropoulos and N. Short are running for the FIDE Presidential office. How do you see the results this autumn in Batumi?

- I do not know. I see problems, but so far do not see the solutions. But the problems are huge. And I think that today it is easier to create a new World Chess Federation than to correct and amend what had happened in the current one.

It is clear that FIDE is going through a terrible crisis. It was to be expected. But no one could imagine that this would happen this year. Now Kirsan is actively moving around the globe, more than usually. Of course he has to reconsider his positions. And if he can succeed to get re-elected, then he has to organize his work in another way. I think that he should be in more contact with professionals to avoid many stupidities he had made during these 20 years.

- What are his main mistakes, in your opinion?

- This first of all is about the World Championship cycle?

- Yes, this knockout format was a huge mistake. We have lost a lot. We lost prestige and popularity. We lost our positions and it is difficult to reinstate them. I recall even my match with Kasparov in Seville in 1987 – we had twice top positions in CNN, higher than the political news. And now chess is not there even at the last place (laughing.) I do not know how to call this place.

The trouble is that Kirsan, without realizing what he is doing, started interfering into the rules change. Why chess has such a long life, and is alive after many crises? Because of traditional rules. And FIDE Presidents never had courage to interfere with the rules changes. Of course this is the prerogative of World Champions, who should defend our traditions. Unfortunately, I do not see the role of M. Carlsen here. I think he omnivorous. Unfortunately, he is not that kind of a player, as Botvinnik or myself used to be. He allowed the rules change and it is very sad.

- But there was Anand before Carlsen.

- And also Anand. He did not feel his role and he did not perform the defense of professionals’ positions. If we make mistakes in the rules change, chess could be lost forever. And I mentioned this at the RCF Congress. The thing is Kirsan has neither knowledge nor understanding. He should not have touched upon these issues, even if he claims that he is a great chess player. But we do know what kind of a chess player he is.

- What are you talking about? (laughing). Amateurs should not get involved in chess rules. This is the business of professionals. And when defending from my attacks at the Congress, Kirsan said that he had built a system, he consulted with the ACP, and this was not his initiative and every change in rules had the approval of the ACP.

I was leaving the Congress and heard everything. So the next day I called E. Sutovsky and told him: "Emil, are you out of your mind? Yesterday Kirsan said at the Congress that all rules changes were coordinated with the ACP, and you are its President". Emil replied: "What? Nothing had been coordinated. We were just informed about things which we were completely against. But from 1 January some improvements took place". I asked him – did you support? Emil said: "No, never. No rules change the ACP supported".

So this is the delusion of public that Kirsan allegedly changes rules with the approval and knowledge of GMs. I could not believe this and called Emil, just in case. As this craziness could be contagious, not only Kirsan could go crazy, but Grandmasters also.

- Anyway, in the world and in Russia a lot of things are being done to restore the prestige and popularization for chess.

- Yes, some things are being restored, but it is very complicated. We should develop and reinforce positions but we had lost them. We are in a hole of about 15 years. Although Kirsan is telling fairy-tales how well he was governing the chess world. And now a big problem is that he is in the sanctions’ list. He claims that he had gotten in the list because he is close to V. Putin and this is the attitude to Putin in the world. But in fact I think that the presence of Kirsan in the sanctions list has nothing to do with Russia’s position.

- In your opinion, what is it connected with?

- This is contained in the letter of the US Department of Treasury.

- That it is because of alleged transactions of oil sales. Do you agree with this point of view of the US Department of Treasury.

- I do not agree. But this letter provides an official reason. And we see that in 2,5 years Kirsan did not manage to change the positions.

And now the accounts in the Swiss bank are closed. Kirsan claims that there is nothing terrible, another European bank will be found. But I am sure they will not find. If an account is closed in the Swiss bank, then no European bank will not open an account for FIDE, if Kirsan remains in the office. And this has huge consequences. In many European countries, if you can’t open a bank account, then you cannot register. And it means that FIDE will be out of Europe. The office of the Federation has to move – number one. Secondly, sponsors will have a completely different attitude. One thing is when they transfer their money to a Swiss bank, European bank, and another thing, if they have to transfer the funds, for tournaments and championships, to an Arab or a Russian bank. This causes a lot of negative and huge consequences for chess.

But let’s hope we will succeed and get out of this crisis.