Leinier Dominguez Perez was born in Havana. From an early age, Leinier was considered the true heir of Jose Raul Capablanca: the boy completed his first grandmaster norm when he was 15 and soon after, he won the additional open tournament in Linares. A few years later, the young grandmaster won several national championships and became the undisputed leader of Cuban chess.

In 2004, Dominguez sensationally qualified for the quarter-finals of the FIDE knockout world championship, where he lost to Teimour Radjabov in the tie-break. As a member of the Cuban national team, Leinier has played in 8 Olympiads- together with Dominguez and his friend and rival Lazaro Bruzon, the Cubans became a real threat to established powers, regularly finishing in the top 10. Leinier Dominguez and his team also took Cuba to three world team championships and victories at Pan-American championships.

The next step in Cuba’s greatest player came in 2008. Domnguez won the Capablanca Memorial in his homeland and split 1stplace with Evgeny Alekseev in Biel, leaving Magnus Carlsen behind. Soon after, Leinier won a blistering victory at the world blitz championship. Straight away, the central Cuban TV channel released a film, Leinier-2700, which documented the grandmaster’s life and his family.

After a string of victories, Leinier Dominguez became a member of the global chess elite. His colleagues call him a strong positioning player with a wonderful opening, precise calculation and a thorough understanding of chess. Dominguez began to fight for the world championship. At the 2011 World Cup, the Cuban made it to the 1/8 finals, where he lost to Judit Polgar in blitz chess. In the 2012-2013 FIDE Grand Prix, he won a stage in Thessaloniki without a single defeat, setting the stage for a challenge in the overall ranking. As a member of SPbCF, he has won Russian championships and brought home medals from European Cups.

Leinier Dominguez’s record rating is 2768- at the time, the grandmaster was among the top 10 players in the world. Heismarriedandhasason.

“In the last few years, my rating has wobbled between 2720 and 2760. That is my level, not 2800. I am not among the world’s best five, I am not a Carlsen or Caruana. I understand that fans expect victories from me. I want to win too, but there is no reason to believe that I will win game after game in a tournament where the average rating of my opponents is 2750.” (Leinier Dominguez). 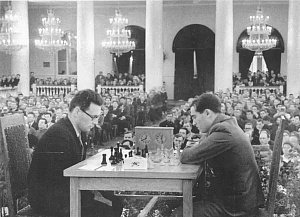