With an Eye to the Candidates

The finish of the second FIDE Grand Prix leg in Moscow has brought little joy to the national chess school and vice versa to that of the Heavenly Empire. I have not felt like taking up the pen for quite a while even. I remember the chess world actively discussing Igor Kovalenko's reading the Orwell "1984" when an acquaintance of mine asked: what would be the most terrible fear for me as part of the ultimate test devised by the mighty O'Brien for the story heroes. My fear of height immediately sprang to mind, coupled with an unwillingness to give coverage to a Candidates Tournament with Western or Chinese grandmasters only...

Not the best week for those flying the tricolor flag

It is somewhat early to resign to despair, however. We still have Sergey Karjakin with his bulletproof ticket and Vladimir Kramnik with his current rating adding to a certain optimism, although we were looking forward to getting a lot more from the ultimate rounds of the Grand Prix leg. Indeed, real opportunities were there with Peter Svidler and Alexander Grischuk! This is not to mention Evgeny Tomashevsky, who, despite being happy with his nine draws, had his fair share of opportunities to score. 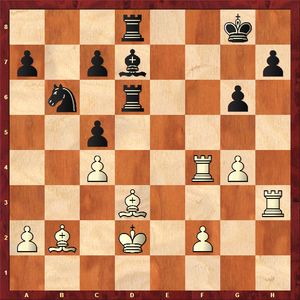 The number of Pentala's saves in this event is incredible! This is nothing short of fantastic and I seem to recall nothing of the kind even when searching my memory for achievements of such main chess magical illusionists of ours as Boris Savchenko and Pavel Ponkratov. Besides, Harikrishna went on to add to his success by grinding down Ian Nepomniachtchi out of a hopeless position...

Worth trying is 31...Rf8 since the followup simplifications remove quite a number of pawn material from the board to give rise to an ending in which the contest of a long-range bishop of Harikrishna's versus Tomashevsky's knight allowed the former to escape the worst.

With the time control over, Black is just up a pawn, although a doubled one, which is nothing that guarantees victory with the White king so active. 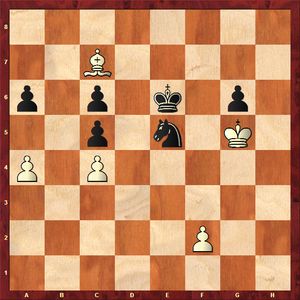 The game, however, has the Indian grandmaster doing away with the c5-pawn:

The following day Pentala raised in the tournament standings even higher... 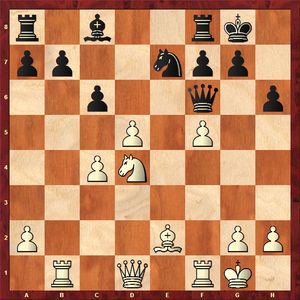 One of the tournament moves to enjoy!  I wish it resulted in a success.

24...Ng6 25.Bg4 changes nothing since the white passers are extremely strong. Now Ian is absolutely justified in not falling into temptation of taking the opponent's knight, but rather connecting his bishop to the attack. 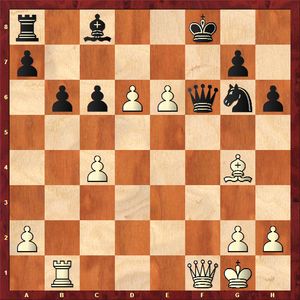 A draw is fixed by 30.Qf2+ Qf6; however, White's decision is easy to understand… Harikrishna, having so surprisingly emerged up a pawn, takes his king into a dodgy dive towards the queenside. 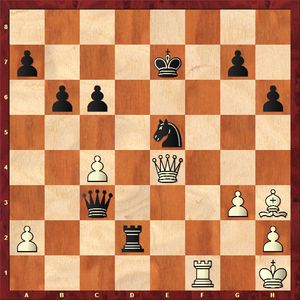 33…Kd6! 34.Qf5 Kc5!, and celebrated victory shortly this so efficient a manoeuvre.

Peter Svidler could break away from the massive group sharing "+1" for as long as two rounds, but it never came about. 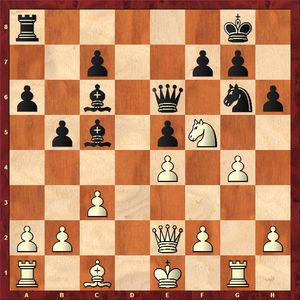 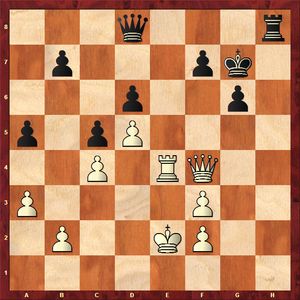 Black has at last pulled out a "splinter" from h6 and has every reason to count for success. At this moment Hikaru made a strong move and offered a draw, in the best of his traditions.  It goes without saying that Nakamura was aware of the hopelessness of his situation, but why not try your luck with only a minute on the opponent's clock? And it worked out nicely for him indeed.

As Peter Veniaminovich explained later, his mistake was to start calculating lines directed towards infiltrating through the b3-square: 35...Qb6 36.Qd2 Qb3 37.Qc1 (the rook ending is difficult for White after 37.Qc3+? Qxc3 38.bxc3 Kf6 39.Rf4+ Ke7 40.Re4+ Kd7), and it is not clear how Black is supposed to improve further. However, it was necessary to just dump the rook on h1 without any prior calculation to start massaging the soft spots in White's setup after the time control move.

The Russian misadventures were topped by Alexander Grischuk's having gradually outplayed Giri only to fail to convert his extra pawn advantage. 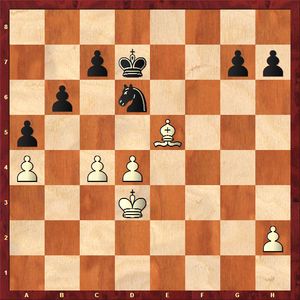 This is yet another instance of a weaker side featuring a bishop versus a knight and a few pawns on the board, but the correct 36...g5! would have left the game outcome up in the air as Black is about to create his passer on the kingside. However, a more modest pawn advance allowed Anish to get the enemy's pawn majority under control.

White needs to take care of the a5-pawn, which is in the way of his knight's coming into play. He needs to deflect the bishop, but it leads to further reduction of armed forces.

Even though Grischuk fights to the last bullet, the times of miracles witnessed in the Fisher's game against Mark Yevgenyevich have long since gone...

I wonder if the team championship in Khanty-Mansiysk will see Caissa reimbursing for these mishaps? It hurts a lot thinking about it at this very moment.

It caused quite some surprise when Hou Yifan prefaced the tournament by coming into the open with no lesser claim than qualifying into Carlsen. However, leg two has shaped so much better for Yifan over leg one that it made fans forget the ungainly "Lalith Babu incident". The athletic-looking young people would break down under pressure from the Chinese female player and allow tragic errors to creep into their play. 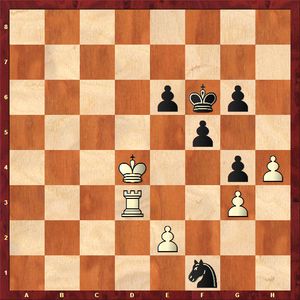 Now, instead of making a simple draw with 65...Nd2, Hammer believed he was winning anyway!

What a disaster! The press conference revealed that it was actually the 66...g3 67.Ra5 geometry had escaped Jon Ludvig's attention.

Also going down to the Amazon warrior was her opponent from the old match held in the Far East, Russia. Ernesto's performance was very confident up to a certain moment so that he achieved an edge, but then the irreparable happened. 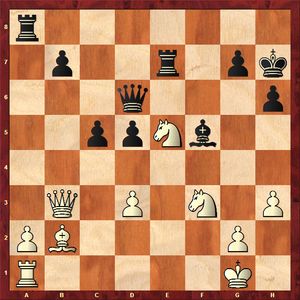 Two minor pieces are superior to a rook and a pawn, and after 26.d4 White defends the e5-knight to follow it by blockading the black queenside pawns and looking in future with optimism.

29.Bxe5 Qxb3 loses, but otherwise White is simply down an exchange.

Ernesto is a man of courage, and he promised to make for this Moscow failure in the stages to come. All that is left to do is to wait for the next leg to begin.

The tournament fate was sealed in the encounter of Boris Gelfand and Ding Liren. The Chinese grandmaster's performance was indeed worthy of the top place more than anyone else's, but such an all-or-nothing player as Boris Abramovich was surely determined to give him a big fight. This is what was the Israeli grandmaster's undoing.

This audacious guy wearing a suit and sneakers needs no asking twice!

It was worth waiting with 16.b3 since White is nor prepared for the open play yet, objectively speaking.

Ding Liren's answer is very good in terms of putting White up against an unpleasant choice to make. 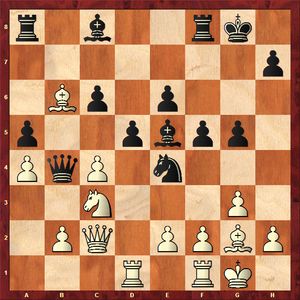 A piece sacrifice is an error since White gets no compensation for it. However, was it for the sake of a hopeless fight for a draw after 20.Be3 Qxb2 21.Qxb2 Bxb2 22.Bxg5 Ba6 that the 2012 world vice-champion had shown up for the game?

Although not bad is 21...Qc7 22.dxe6 Rb8, the tournament winner grabs whatever comes his way. 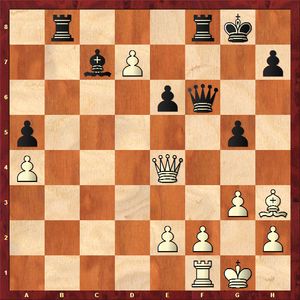 A trivial 34...Rxd7 is rejected in favor of delivering a checkmate.

Do not jump at any conclusions regarding your style

Ding Liren's performance throughout the tournament was very good indeed, although in round 8 he ran into a powerful home prep by the Dutch grandmaster and had certain worries to live through. 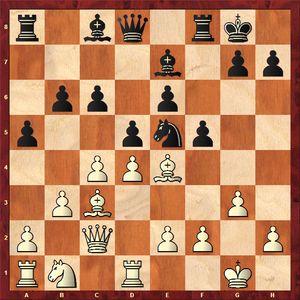 14.Bg2 Nf7 15.Nd2 Ba6 has occurred in the tournament practice and brought no special problems for Black. Ding takes a pawn out of principle, even though his king is going to be anything but pleased with this decision several moves afterwards.

18.Nc3 Rc8 assures an easy play for the attacking side; therefore, the Chinese uses his queen as a leverage. How much risk is involved in this decision anyway? Well, let the opponent calculate the complex lines involved! Viktor Lvovich would have likely addressed the issue in a similar way. Despite Ding's good-heartedness, his over-the-board decisions are rather reminiscent of Viktor Korchnoi.

This is a substantial deviation from the correct 21.Nd2 Ba6 22.Rac1 Qg4 with any outcome still possible. Now Giri builds up a powerful battery along the big diagonal, putting his opponent up against a challenging dilemma. 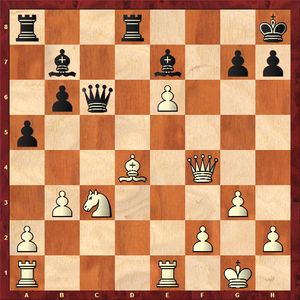 Is it a checkmate after all? No way, the Chinese grandmaster is as slippery as an eel.

25.Bxg7+! Kxg7 26.Qf7+ Kh8 27.Ne4 Qe8 28.Ng5, and the opponents suddenly agreed to a draw, although 29…Bxg5 29.Qxb7 Rab8 30.Qc7 Qe7 or 30.Qe4 Qg6 would have allowed Black to hope for more. It is a pity because the contest of three pawns versus a bishop promised to be anything but boring; however, the overall spirit of the competition prevailed over the players. Despite all this, Kirsan Ilyumzhinov noted at the press conference that the Moscow leg had had fewer bloodless draws nonetheless, and that he was looking forward to seeing as much uncompromising over-the-board hostilities in Geneva as possible.

However, with one round before the events described above, Anish had had an exciting duel against Salem Saleh, in the light of which it would be somewhat premature to tag him as a king of draws! A prince of draws, at best.

Peter Leko's influence, as one of the pillars of the current team of the Arab grandmaster-millionaire, is unmistakable. It is he who has introduced his trainee to the reinforced concrete Caro-Kann. 5...Nd7 6.Nf3, followed by 6…Ne7, 6...c5, 6...Qc7 or 6...a6, has been a frequent guest here, but Black decides to make use of Alexey Dreev's recipe.

Black's statistics in this position is not impressive with the White's bishop pair and a comfortable development of his pieces, but the line's father would invariably end up in good positions. 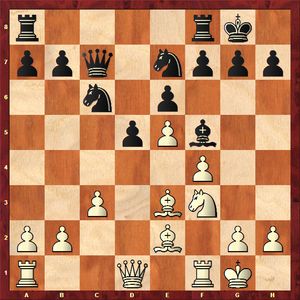 The game continuation was followed by Giri's going into the bayonet charge, at which point it was hard to imagine the battle taking that long to finish! 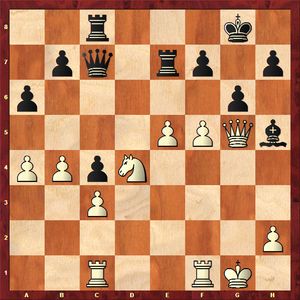 Saleh Salem has got a wonderful opportunity to escape in one piece (given the depth of the drain that his position has only recently been down to), but the way back was nevertheless associated with negotiating certain pitfalls. 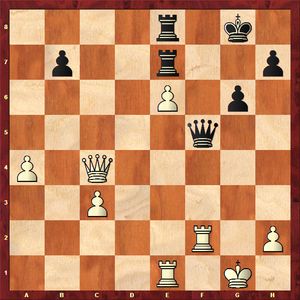 Black suffers a shipwreck only a few meters from the shore. 39...Qg5+ 40.Kh1 Rd8 gives Black access to the d5-square to trade queens and transpose into an easily drawn rook ending. Now, however, the control move has Anish invading with the rook to give the arising rook ending a completely different nature...

White has two strong passers, but given Black's opportunity to advance pawns on the kingside, care should be taken. 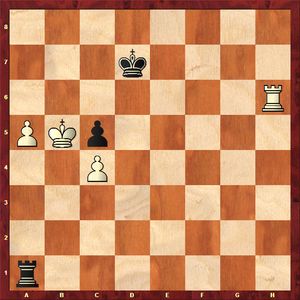 Anish does not take another pawn, threatening to trade rooks instead.

Among those who have participated in one tournament only, the highest score is with Dmitry Jakovenko – 70 points.  With 71 points awarded for leg two are Peter Svidler, Teimour Radjabov and Ding Liren. The struggle continues, although the first four players' chances seem more realistic. Meanwhile, all Shakhriyar needs to do is just not fail his third attempt.

This said, let us take a short break from the qualification cycle. We are in for an individual European and World Team Championships!