Why Repair Things That Work Fine?

The situation around the RCF presidential election has developed in the way that it has become difficult for everybody, who is professionally involved in the Russian chess, to maintain aloofness. Having recently read news and studied information, I caught myself thinking that I don’t understand something. As if unexpected stormy complications appear again and again during the analysis of a calm line, and these complications don’t arise from the logic of the “position”. It is a circulation of complaints against the acting governing body, accusations, bureaucratic formulations, personal attacks…

My first reaction was to smile ironically, shrug my shoulders perplexedly and continue doing my things, but the wave of negative is growing wider, and, moreover, I see respected people, colleagues on opposite sides of improvised barricades, and that can lead to clashes and split in communication, and it will not be easy to forget it notwithstanding the outcome of elections. The last straw that induced me to speak out and join the discussion was a news that it had been suggested to the Supervisory Board to terminate early the powers of the RCF Executive Director Mark Glukhovsky that had found a solid support, according to the formal data. I was quite surprised (and I am sure that not only I) to see the names of well-known arbiters, whom I have always treated with a great respect and who have shared the benefits of the Federation for many years, in the list of those who supported this initiative. On no account, I want to make personal remarks: the expression of will is absolutely free, everyone has one’s own motives, and I don’t pursue such objects in my article. I just want the fever pitch to be lowered and everybody to think: what is happening in reality?

On what ground did all of a sudden so many complaints to the Federation’s work appear? By all indications, the Federation not only fully complies with its work, but also is generally regarded to be one of the best organizations of that kind both in the whole chess world and in the sport life of our country. For twenty years, from my first successes in children’s events, I have been actively involved in the chess life and have been watching closely the events that were happening, and my opinion is that the Russian chess players have never lived better than now at all levels (from children to national teams). To be fair, there were other good managers and quite good times, but now chess is placed on a truly different level of popularity and financing.

As a person who passed almost all stages of our “chess pyramid”, I can compare the state of things step by step. Children’s chess? As a child and junior, I could only dream about such Russian youth championships, like those that take place in Sochi, about grandmasters schools not only of Sirius’ level with its absolutely unique staff members, conditions and possibilities, but also acting regional centres, about information accessibility and personal communication with top players… 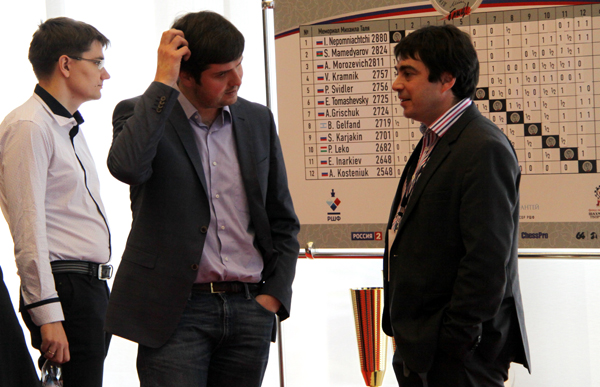 Interest to studying chess? Recently, there have been nearly more participants in the Saratov regional U8 championship than it had been in the youth regional championship in all age groups in my time. It is indeed not very convincing to compare the current state of things with the end of 1990s, but people’s aspiration for studying chess, the popularity and prestige of the game are, no doubt, on a serious level, on a much more serious level than before. As a result, a profession of a chess coach is essential and quite profitable, while before it was mostly a titanic labour of enthusiasts.

The system of professional and commercial competitions? It is a rather precisely structured and constructed, logical system with an interesting Russian Championship Superfinal, with a possibility for young players to perfect themselves in the Russian Championship Higher League (I would like one more time to thank Alexander Bakh for the idea and its realization) and many tournaments of various levels and time controls for the players of 2550-2650, like the Russian Cup, Rapid Grand Prix and many others.

Finally, elite sport? This issue is quite a delicate one for me because the main argument “against” - the absence of Olympic gold medals in men’s section over recent years, but “only” silver and bronze medals – is directly connected with my play, alas!  However, if we keep an open mind on the subject, the number of individual and team achievements is sufficient, and Russia is regarded as the leading chess country in a professional world. The fact that Russia is not unconditionally the best does justice to the opponents’ progress. Perhaps the club chess had a period of bloom in 2006-2008, but now it is a bit forgotten. On the other hand, this trend is All-European and is subject to another article.

Getting back to my above-mentioned question: what is happening? Where is the logic of expressing complaints to the management of the organization with the record of service of that kind, without mentioning an early termination of the powers of its Executive Director? Maybe the issue is in some personal traits and resentments? Having known Mark for many years, I can affirm that he is a very benevolent and responsive person, he is open and easy to communicate with. This can be said about the whole collective body of the Federation, where I always arrive with pleasure. The format of the article doesn’t allow me to name everyone, but, in general, a collective of professionals is working in the RCF at the moment, and it is a pleasure not only to deal with them, but also to communicate. Of course, this experience is very subjective, everybody makes mistakes, and it is possible to find fault with everything, but I suggest to consider matters as a whole.

Chess players, especially chess players of a top level, are people with a complicated mental and emotional organization, and it is hardly possible to imagine a uniformity of views and opinions among us. Nevertheless, I dare to think that the majority of my colleagues – masters and grandmasters – will support a simple thought: Andrey Filatov and his team perfectly comply with the governing of the Russian Chess Federation. I eternally respect people who have a different point of view, but I appeal to everybody to make decisions with a cool head and without emotions. Why repair things that work fine?