Vladislav Artemiev: This is Just the Beginning

- Thank you very much

- I was told that your child was born during the tournament.

- Congratulations! Is it a boy or a girl?

- If it had any effect, it was only positive. Although emotionally I felt similar to my usual state. I played round after round, the tournament gripped me and I invested myself into it. Of course, I was happy that the team won, but I can’t say it was unexpected. Before the world championship, I had thought the team had had a very good chance. When it comes to family, I was delighted, but I took the news calmly. I just felt happy. I am a fairly positive person in life, so I can’t say that anything has changed radically. 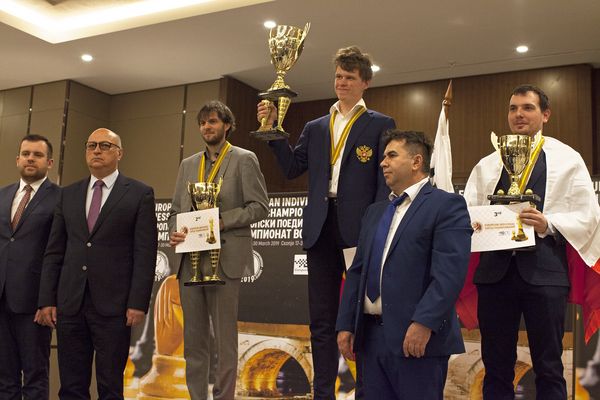 - Let’s talk about the European Сhampionship. How did the tournament go? Which game does stand out for you?

- The tournament was difficult, since I was a little worn-out after the World Championship, mainly emotionally rather than physically. Before going to Skopje, I had set myself the task of qualifying for the World Cup, which I managed to do. My average rating wasn’t enough for the qualification, but it has improved recently.

Before the rest day, I didn’t try my hardest in every game so I would have enough strength for the 11-round Swiss after a challenging WTCC. For example, in the game against Maksim Chigaev, I settled for a short draw with Black. I had 4 points out of 5, so I won some games with White, but I tried to avoid taking risks and played conservatively. I decided to make all my main moves after my rest day. And so it happened.

There were several difficult encounters. In the third round, I played against Samvel Ter-Sahakyan from Armenia. We played the Caro-Kann Defence. I had a normal position in the opening, though I was a little too passive. But at one moment, I lost the threads of the game and he got an advantage. I was almost done, but Samvel was too slow and I managed to force a draw. So I consider myself saved by my opponent in that game.

I also had a difficult game against Kacper Piorun, where I was playing with the black pieces. The game was unclear from the start: the opponent unexpectedly offered me a draw on the fifth move. I had already had a short draw beforehand (and I don’t really like those), so I had become a little angry. I declined and made a few active moves; I attacked the pawn, but didn’t take it. In the end, it turned out that I lost two tempi, after which he had a comfortable advantage within a Marozzi system. He was outplaying me and set up a winning endgame with an extra pawn. But Kacper ended up in a strong time trouble once again (probably because he was nervous), while I defended well and saved the game.

So, I can conclude that I had two difficult games. And in the last round, I played against Maxim Rodshtein. He surprised me with his first move. Maxim usually plays 1. d4, but there he chose 1. e4, and we ended up in the Najdorf Variation with 6. f3. I could see that he was well-prepared and I was in a difficult position, but I stood strong and survived. 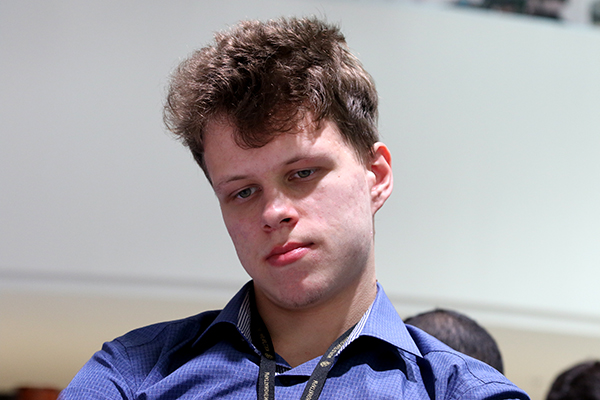 - What can you say about the games you won?

- It’s always easier to play with White. You are harder to be unsettled in the opening and you can go ahead and play calmly. I like spending the first hour and a half playing slowly and I sometimes managed to force my opponents to play the long game. In my game against Andrey Esipenko, I got a slight edge in the middlegame. The position seemed simple, but I had active ideas and his king was weak. In the end, I managed to overcome him gradually. I also won good games against Paravyan and Kulaots, the latter at the start of the tournament. Those episodes are good.

- You’re now a family man, so you must have an understanding how you’ll spend the prize money.

- Well, I already have a flat in Kazan. I don’t have any things I really need. Maybe I’ll buy a dacha in the future…I don’t know, we’ll see. I’ve never had any desire to buy something very expensive for myself. I already live well and in comfort.

- At the start of 2019, you won three notable tournaments. Which of those was the most significant for you?

- The most significant was probably my victory in Gibraltar, since that was attended by top players and I had strong opponents. The European Championship is also a good tournament, but it has weaker players and I was considered one of the favourites.

- Yes, you had the highest rating.

- I understood that first place would be amazing, but would not be unexpected.

- What do you think helped you to rise? Is it time to consider creating an “Artemiev Rule” to counter the “Khalifman Rule”, according to which marriage takes 50 points off one’s rating?

- I think it’s too early to speak about a rise. I had a few good tournaments, but I still have things to work on. Overall, I think I’m playing more consistently than I used to and I now defend better. I always thought I had a good chance to make it in chess. But I repeat, this is just the beginning.

- What did the training camp with the national team before the World Championship give you?

- They were useful in questions surrounding chess. We practiced a little; I spent time with Alexander Grischuk and Dmitry Andreikin…we talked socially. That’s important before a team tournament, when a micro-climate has to be created between team members. That seems to be the main purpose of training camps.

- What can you say about your team debut? What impressions did you get from your first World Team Championship?

- When I was first invited to the team, I decided to attend regardless of the time and venue. Overall, I had no qualms before the World Championship, but I felt more responsibility and played according to my positions.

There were a few regrettable games with Black when I was stopped during the opening and where I couldn’t play to my full ability. There was a quick threefold repetition against Gawain Jones, and then I had the Exchange Slav against Abasov…In individual tournaments, I would have continued to fight if I felt up for it, but since I was playing for the team, I understood that the team’s fate was important above all else, so I played in a more compact style with Black. What emotions did I have? I’m delighted that the team won! I’m also happy that I won a few games. I didn’t have any illustrious opponents, but the average standard of players is high now, so I always feel pleased after a victory. 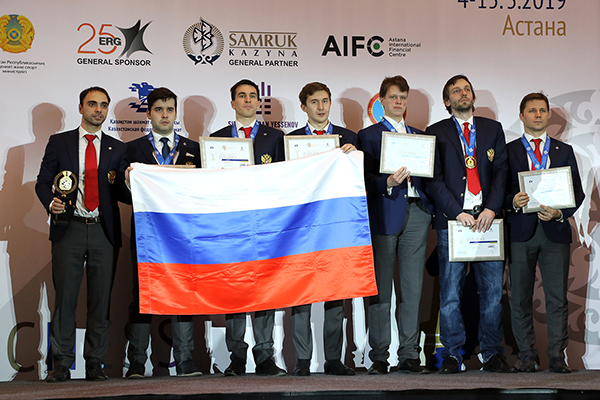 - Who are you currently working with, if that’s not confidential?

- To be honest, that’s a painful question, since I haven’t always had a regular trainer. Right now, I need a second more than a trainer. In the last six months, I had contacts with people here and there, but I have never developed professional relations with anyone. I trained with Kamsky, but that was many years ago. I’ll have to tackle this problem,

- Before the World Cup?

- In the grander scheme, I do have these targets- including fighting for the greatest goals. I think I have a chance, but I’m not sure about this year. There are places where I can be better, so I don’t think I should force these things. I’ll just carry on playing and see how things go over the next few years. Of course, I’d like to play against Magnus more often in classical chess.

- What about an entire match? Can you imagine it in your head, playing against Carlsen?

- I’m ready whenever, but first I need to qualify. Of course, it’s a little too early to play a match. If I make the necessary improvements…I’ll focus on other things for now, such as qualifying for the Candidates Tournament, and I’ll think about the match against Magnus later.

- I remember, you told me a long time ago that your chess hero was Nigel Short.

- When I was 13, I was playing on a portal- I think it was Playchess- and I played more than a hundred games against Short. I even bought a disk with his games. Yes, I liked how he played. At that time, there was a lot about the human side of him that I didn’t know, but he’s also a very interesting man. Not long ago, I was Nigel’s guest; I was waiting for the London-Moscow flight, and he invited me to spend three-four hours at his home. I even saw his son; I think he was a little older than I. So we met, at long last. 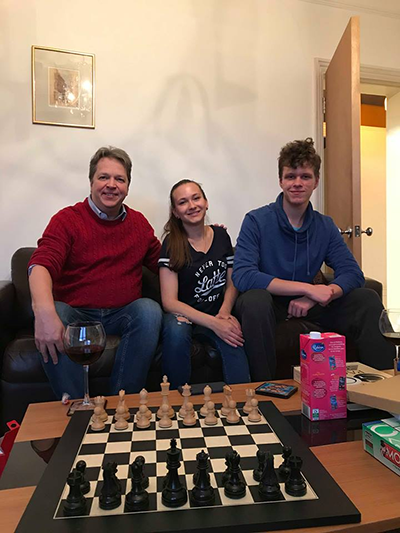 - Do you have a current role model in chess, or do you no longer create heroes for yourself?

- I like myself when I am playing well. Of course, Magnus is a fantastic player, but even he makes mistakes. I appreciate Karpov’s style very much. I think that Capablanca made an enormous contribution to developing chess. He was ahead of his time. In principle, I like all high-quality positional players, like Valery Salov and Michael Adams. In 1990s-2000s, it was, without doubt, Vladimir Kramnik. But I don’t think I have one specific hero.

- Let’s move away from chess a bit. Tell us about your hobbies. Which team do you support? You’re from Omsk, and they have the Avangard in ice hockey, but you now live in Kazan, which has Ak Bars.

- I am impartial towards hockey, though my wife and I did attend a match once. Ak Bars was playing against some team, and they won 3:1. But I prefer football. For example, at the European Championship, we were playing almost every day. There was a small sports field, and 10-15 people played with each other until 10 pm. I used to play football quite a lot. I would say that’s my favourite hobby.

In terms of analysis, I am very interested in boxing. I follow most of the big matches. Starting from mid-level weight, I am up-to-date in all the main events.

I also like skiing, table tennis and Russian snooker. I also study- it is a hobby as well (laughs). 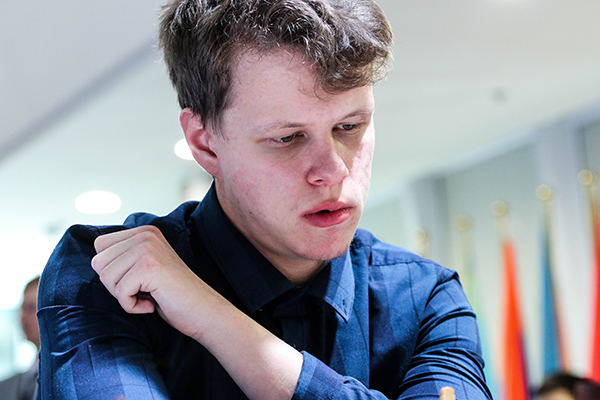 - Ok. What will be your next tournament? And what are your general tournament plans for 2019?

- In May, I will continue my tradition of playing for Kazan’s “Ladya” in the Premier League of the Russian Team Championship, probably at the first board. Then I will play in Poikovsky, which starts on 5th June. After that, I might play in the round-robin event in Danzhou. On a more global level, there is the World Cup. Although I don’t have any specific aims for this season, I will try to play my best. It’s an important tournament, and there’s always a chance. Depending on my performance in that, I might take part in the Grand Swiss. And there will be other round-tables.

- Do you plan to play in the Superfinal of the Russian Championship?

- There isn’t any official information about the tournament yet, but that should appear fairly soon. I only played in the Superfinal once (in 2015), but I was at another level at that time- 2650. Now my rating is higher. It’s interesting; we’ll think about it. Maybe I’ll play, depending on the timing and my condition. It’s important to have a break before the World Cup.