Threefold Repetition in the Hand or Sacrifice in the Air

Going into the final round, only Marina Guseva could enjoy a full night’s sleep after having secured a tournament victory with one round to go. Marina would not slow down and outplayed Tatyana Getman, who was floated in the parings with only 5.5 points because the leader had played everyone with more points. Moreover, she tortured the unlucky Tatyana for as long as 114 moves — Marina seemed drawing so much pleasure from the game that she would have made 200 with equal satisfaction. 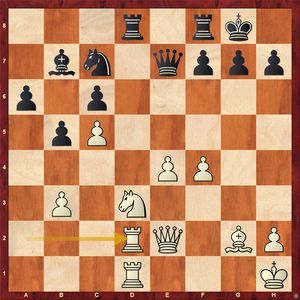 The opening outcome is quite satisfactory for Black. She could have tried 27...a5 or 27...Rfe8. This seemingly active move results in Getman handing over control over the d-file to her opponent.

White is suddenly on the offensive and on the better side of it as well. 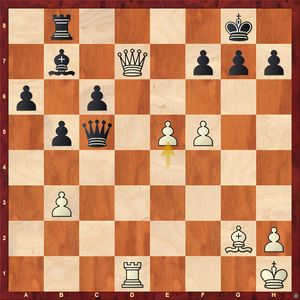 The winner ended up scoring the phenomenal 8.5 out of 9. I cannot recall anything of the kind ever happen before. Even with so few draws that the women's tournaments are known for it was usually enough to score 7.5 to take the first place.

Anastasia Bodnaruk and Daria Voit demonstrated a sound practical approach in the last round by going for a threefold repetition when transiting from opening to middlegame and thus securing the so much coveted Superfinal tickets. As for Evgenija Ovod and Daria Charochkina, Marina Guseva's victims of rounds 7th and 9th, the girls battled for one of the last qualification places into the top five. 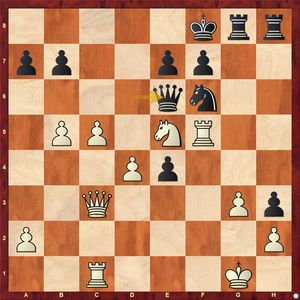 To stop the passer, Black needs to give up the exchange.

The Chernyak — Bivol duel has taken me very much by surprise. Victoria Chernyak is a talented and strong player who is definitely capable of adding much to her current rating of 2315. When the Spassky club organized a grand blitz last fall with almost all GMs of St. Petersburg present, Victoria needed to defeat the author of this review in the last round to overtake Dina Belenkaya. Well, one might claim that comparing a photographer and Alina Bivol is an exaggeration. I am not going to argue with it, but back then Chernyak took me in so tight a positional grip and would never let me a moment’s respite until I could stand it no more and decided to resign. However, being half a point behind her opponent, the native of Petersburg refused from continuing the battle and settled for the threefold repetition when the position was still full of fighting potential. 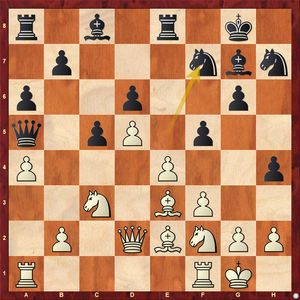 I seem to recall something along these lines in Alexei Dreev’s old gamesx 19.Kh1 Bd7 20.ef gf (20...Bxf5 21.Bd3) 21.Nh3, and Dreev was nearly always successful in exploiting his opponent’s kingside weaknesses in similar positions. So perhaps Chernyak did not see the way to improve her position or even believed that Black had an easier game.

Final standings. 1. Marina Guseva – 8.5; 2. Anastasia Bodnaruk, 3. Daria Voit and 4. Evgenija Ovod – with 6,5; 5. Alina Bivol — 6 points. The competition turned out to be so tough that female players with 5.5 points ended up taking places from 6th to 17th. This group includes both experienced/merited athletes and young stars, but I would like to highlight the success of Ekaterina Murashova, whom we once knew as Katya Akatova. Akatova nearly made it to the Superfinal more than 10 years ago when she was a master living in the Leningrad Oblast. Welcome back, Ekaterina! Well, this quarantine has led to something useful at least. 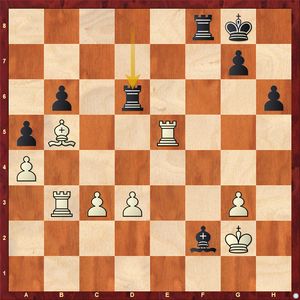 Is it a draw with the opposite-colored bishops no matter what you do? Not quite — Murashova starts a subtle play with the aim of capturing or blunting the opponent's bishop.

White promotes non-stop after 34...Rb8 35.d5, but Galliamova should have tried to bring the rook into the game via 34...Rf3!? The best way to stop promoting it to take the c3-pawn! 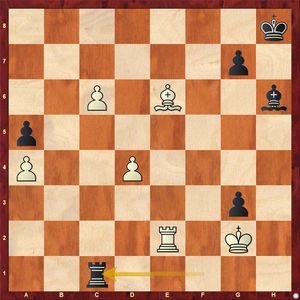 A precise calculation! Now White is winning by force.

This Higher League taking place in the capital of Chuvashia has distinguished itself by many remarkable events. The pictures show the moments of congratulating the birthday people (this is not always the case, unfortunately), and it felt in general that the organizers did their best to highlight how vital this event for them was. The rest days saw simuls given to local children. The girls could not but recall the warm, gentle and touching letters sent to everyone by the chief arbiter Vladimir Makhnev. The arbiter made sure that none catch a cold from the powerful HVAC system working to its full capacity, and everyone watched their figures and ate less chocolate.

Pavel Ponkratov was ahead by a point going into the final round in the men's tournament, but the legendary filibuster was not to relax ahead of time as he was pursued by as many as 7 players and his tie-breakers being not the most brilliant ones at that. The leader had a serious test to go through in the face of a potent white-color player Alexander Motylev. 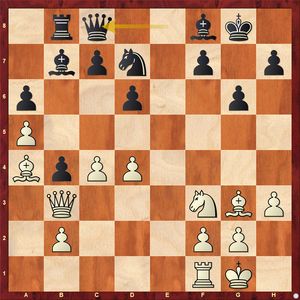 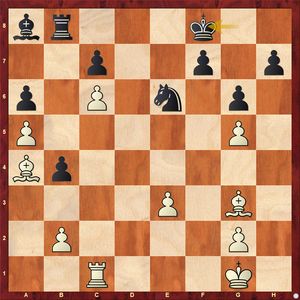 As a result, White has powerful bishops and domination. However, let not the first engine lines baffle you as the position is difficult and irrational. This is especially so against the invincible Flibustier. White does have pawn weaknesses of his own.

31.Bb3 Ke7 32.Bc4 looks more precise, but Motylev leaves his bishop in a position that leaves much to be desired. Ponkratov immediately seized the chance to activate all his pieces.

34.Rxb4 Nc5 is no longer clear, and the text would, in different circumstances, prompt Black to think of more than just making a draw.

An unfortunate misfire, but do you know many people to win a winning position against Pavel Ponkratov? As a result, Motylev was lucky to take the coveted fifth place. And Ponkratov won deservedly and finally made his way into the Superfinal. Way to go, high time for him to play in the Superfinals and World Cups.

Female players shined in the tournament. While Polina Shuvalova was stopped in the penultimate round by Mikhail Antipov, Aleksandra Goryachkina did qualify into the men's Superfinal, has negotiated the ELO threshold of 2600 and has added to her strength as of lately! When Goryachkina negotiates the 2700 level, we will definitely need to see the second part added to the book "Small Steps into Big Chess." It’s a pity that back then Goryachkina’s story came out in limited edition, and now dozens of mothers and fathers of young chess players ask me where to buy, and the books had already sold out when Aleksandra qualified for the world match. This is not the way to go!

In the last round, Goryachkina even crushed such a die-hard-to-break player as Alexey Sarana, who usually performs very well in the Higher Leagues. 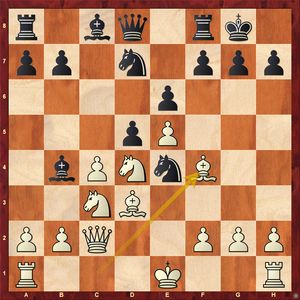 We see the problematic tabia of the 4.Qc2 Nimzowitsch Defense in which  10...Qh4 is considered to be alternative to the text. However, the knight move lacks nothing in comparison.

12...Bd7 13.Be2 Na4 14.cd ed has also been tested at the highest level, but White seems to have some fresh ideas here. Black annihilates White’s bishop pair advantage immediately. 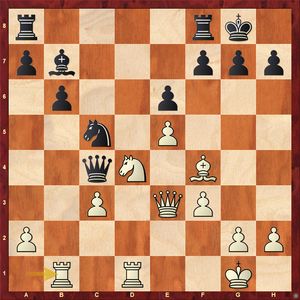 Now Goryachkina deflects the black queen and sacrifices a piece! 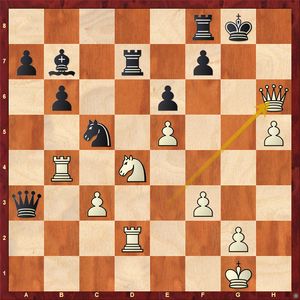 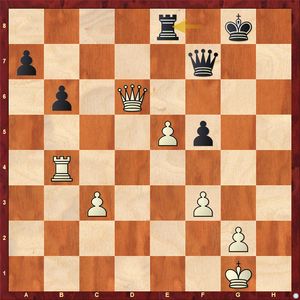 It was worth testing 34...Qe6!? —  the position is terrible for Black, but the rook ending gives some hopes to bail out. The text gives Goryachkina an easy win.

As a result, Goryachkina finished third, while the fourth place was taken by Alexandr Rakhmanov, who wrought a difficult draw from Evgeny Alekseev. The fate of the second place was being sealed between Demchenko and Chigaev, in which both opponents were willing to take the upper hand. A strange thing is this broadcast with a 30-minute delay. However, this measure is forced in the fight against cheaters who, according to rumors, have raised their heads in Russia. 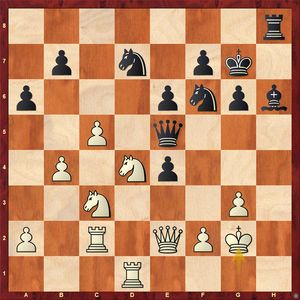 24...Bg5 retains excellent compensation for Black in this most challenging position, but Chigaev puts his bishop en prise in the Tal-Stein style!

White should have tried to escape with his king by 29.Ke1!? 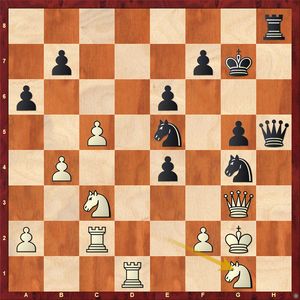 The unhurried 36.Ke1 Kg6! highlights the tragic situation of White’s position. Black wins the queen and continues his offensive.

40.Rd7+ Kg6 does not help as the white rook is hanging and the checkmate as well.

This one of the most exciting Higher Leagues has finished. We are looking forward to the Superfinal and World Cup. The Black Sea Grand Prix is also something to keep an eye on. See you! And take care of yourself, because these few nights I cannot sleep well over the news of Yury Dokhoian's death... I hope that we stay healthy.