The More Masks the Better

A real symbol of the present-day chess that has survived from the old age and still remembers the presence of many world champions beginning from Mikhail Tal and up to Vladimir Kramnik, the hotel Zhemchuzhina of Sochi has witnessed yet another start of the qualification tournament in a season that has barely seen any events. These are sad times and who knows if we are not in for yet another half a year of quarantine, but one cannot but say kind words about the organizing committee. Be as it may, the Higher League with its hefty prize fund and tickets into the Super Final has started. Skeptics may claim what they want, but lack of money and feeling of hopelessness will give a hard time to chess players if you go on doing nothing.

Preparation for the competition involved large-scale measures. Almost every day the participants got emails from Vladimir Makhnev with admission instructions. Eteri Kublashvili's beautiful pictures show safety screens so beloved by many from our Chelyabinsk competition reports, as well as masks to all tastes and colors, wearing of which is checked by Artem Akhmetov and his team. Everything is under control.

Playing chess while wearing a mask is unusual and is quite a challenge.

Although the men's section misses several strong players, the competition still features a very tough lineup. On the other hand, having qualified into the Superfinal by rating, two beautiful ladies – Aleksandra Goryachkina and Polina Shuvalova – have chosen to compete in the men's section. The women's section has gathered almost all strongest players except for last year's winner Elena Tomilova, who comments on the tournament games together with GM Roman Ovechkin.

Going into the Sochi event there happened a change of the country's youngest grandmaster. A holder of an impressive rating approaching 2700, Andrey Esipenko of Novocherkassk used to be our younger generation's leader over several years.

However, in times of quarantine Arseny Nesterov of Novgorod has finally received the GM title! I want to thank the head coach of the national teams Sergey Janovsky, whose efforts allowed us to resume collaboration with the young athlete last year, which was so quiet a period. Meanwhile, Arseny developed a hurricane pace and made all of the three required norms in just 9 months.

By the way, Esipenko and Nesterov have recently shined in a strong online European championship by taking first and third places, respectively. If anything, there is no shortage of talents whose time to shine is near, and in the Higher League there play Volodar Murzin (a holder of two GM norms), Stefan Pogosyan, Rudik Makarian, Martin Stukan, and other promising figures. That said, the women's section is just a battle of generations.

Round one is known to be a time of upsets. Thus, its number in the beautiful half's section turned out to be just mind-boggling. There have stumbled as many as five (!) rating favorites. Anastasia Bodnaruk lost to Margarita Potapova, Mariya Yakimova outperformed Alina Bivol, Ekaterina Kovalevskaya lost to Margarita Schepetkova, Evgenija Ovod to Yulia Grigorieva, and Ekaterina Nasyrova defeated Daria Charochkina. Needless to say, Rita Potapova's excellent result in the 2019 Superfinal does little to qualify her as an underdog. It's just that Margarita's rating has sagged slightly after last year's rendezvous with the Indian juniors. However, this is clearly a temporary phenomenon.

How about that! What a pleasure to make such a knight move in the first round of the Russian Higher League. Up to a certain moment, a seasoned Evgenija Ovod treated the position in a proper way by keeping her opponent's aggressive plans in check. 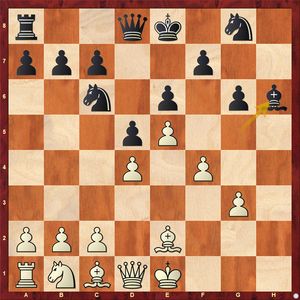 White has a bishop pair, but she still needs to develop her pieces and evacuate the king. It gave enough reasons to be on the alert. Training the guns against the g6-square with 14.Qd3! would have served the purpose.

Now 14...g5!? deserved attention, but the athlete from Bashkiria undermined the white chain in a different way.

It was again worth deploying the queen into the shooting position via 15.Qd3! The g6-pawn capture with the bishop is by far less unpleasant for the black king. 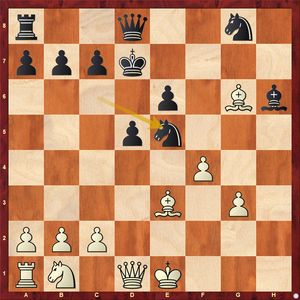 The black king is in safety, and White still needs to sort out the discoordination issue of her pieces. White should have probably aimed at safety first with 8.Bd3=, but Ovod clearly underestimated her opponent's attacking potential.

19.Bf2 Bg7 looks great no longer, but the text is a complete failure.

The black pieces arrive at the shooting positions like clockwork.

However, it was not entirely without bright moments for the favorite players. The Moscow champion Anastasia Paramzina and Oksana Gritsaeva produced fireworks. Paramzina's error proved fatal. 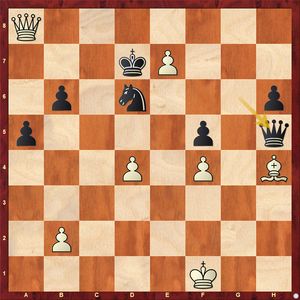 Can the black queen be a lone warrior? No seems the logical answer, but for Oksana Igorevna, who has left behind her students for the tournament, nothing has ever been impossible.

This is a significant inaccuracy instead of the precise 57.Kh1 that results in the white pawns dropping one after another and with checks at that.

62.Bf2! K:e7 63.Qc6 would have kept the intrigue in the game, and now Gritsaeva seals the deal by trading the queens.

It is a good idea to turn to endings after such queen adventures. Ekaterina Goltseva is a very tough warrior in the final stage of the game, which I have first-hand knowledge of from the Igor Kurnosov Memorial. 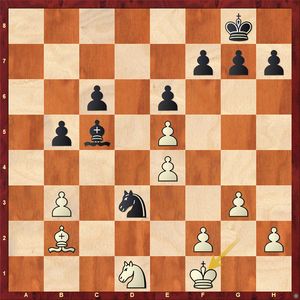 In the men's tournament, the fight's intensity was much higher, as is often the case. Artemiev – Sviridov, Iljiushenok – Esipenko, Predke – Lobanov, Fedoseev – Zabotin, Murzin – Sarana, Shuvalova – Alekseev finished in a draw. In all games, the lower-rated players did not back down and performed in a commendable manner. In a situation like this, it is much more safe to start the competition on a lower board. 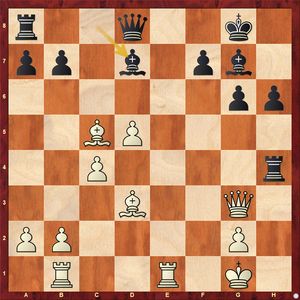 The junior world champion Rudik Makaryan has so far failed to find a way to cope with Pavel Ponkratov.

They now tend to call this ferocious advance in Western chess literature as The Attack of the filibuster. Ponkratov has championed and scored many nice wins in this complicated line in tournament games.

4...Bd7 is a more conservative approach, which Ponkratov usually meets with 5.c4. In this line Black allows the dangerous blockading sacrifice e5-e6. Computers used to underestimate poisonous consequences of the resulting setup. The Vachier-Lagrave – Ding Liren game of the Alekhine memorial is well remembered in which the Chinese GM produced all the 2013 first line moves only to give up with his f8-bishop and h8-rook stalemated. 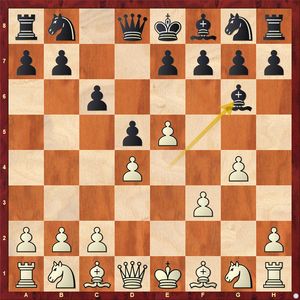 Rudik is known for his encyclopedic knowledge and thirst for opening excellence: Makarian was said to first prepare the entire Moscow delegation at the tournament in Chelyabinsk before looking up his own opponent's games in the database. Online databases show that 7...c5 has never met in the "live" games (perhaps they have employed this move in the correspondence games). Still, the position has collected as many as about 450 views anyway. Not so long ago, the leader of the Russian national team defeated the former US champion here after 7...Nd7 8.h5 Bf7 9.f4, as in Nepomniachtchi – Shankland, 2017 – if Black fails to untangle himself before white's pieces step into the shooting positions, the result is obvious. 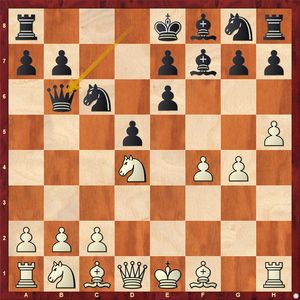 This is a critical moment of the game. Having burned much clock by that time, the opponents were clearly out of their books. Black tries to displace white's pieces out of the center, and Ponkratov needs to develop more than anything else. 12.Bb5 Nf6 13.Nc3 a6 or even 12.Be3!? Q:b2 13.N:c6 bc 14.Bd4 was an option, but the native of Chelyabinsk rather preferred development.

Maybe he should have opted for 13...Kf6 or 13...g6 instead because the game ended in Black's disaster, and the advice not to employ the filibuster attack against Pavel Ponkratov sounds way too shallow. Rudik gave the material back for the sake of development, but his king's position remains unreliable.

The 22...Qc3 23.Bd4 cartridge is blank, and White's bishop pair advantage gives him a crushing attack.

The immediate disaster could have been stopped with 26...Bg6 27.Qb4 Q:b4 28.B:b4 B:d3 29.R:d3 Rf7 30.Bc5, but the endgame is difficult for Black as the c5-bishop dominates the position and the a3-pawn will drop sooner or later. The c-pawn advance was an invitation for a direct assault. 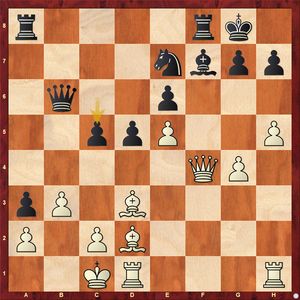 It did not go without upsets for the favorites – David Paravyan went down to Maxim Samusenko and Vadim Zvjaginsev to Artur Gaifullin. 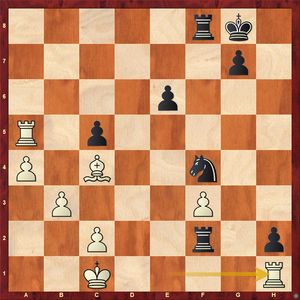 This is an interesting position! Black promotes the h-pawn, but White is likely to start advancing his passers' chain on the queenside. 29...Rf5 deserved attention to keep the с5-pawn alive, but Gaifullin's actions followed the principle "I see the goal and no obstacles in the way of attaining it."

White should have opted for 31.B:e6+! Kh7 32.R:h2+ R:h2 33.a5, when his pawns can be a real match to Black's extra rook. Zvjaginsev likely hoped to stop the h2-pawn with some cosmetic measures without seeing the actual refutation. 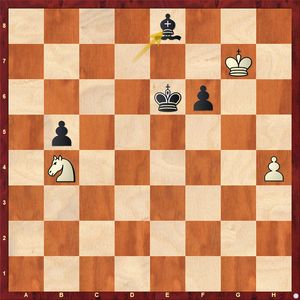 60.Nb4 Ke5 fails to help either. Although the bishop is powerful on both flanks, David has worked wonders with his knight so far. 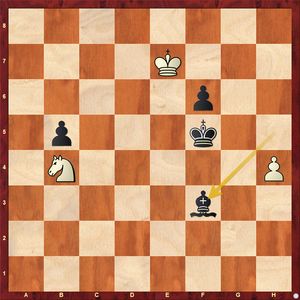 It seems that Black has no calculable way of winning after 65.Kd6!, aiming at 65…Kg4 66.Kс5 Be2 67.Nd5 f5 68.Ne3+ Kf4 69.h5! However, nothing is to be ruled out when players are pressed for time and have to rattle out their moves on incremented time. Now Maxim Samusenko manages to promote his passed pawns.

A game of one of the national team's coaches was full of action. 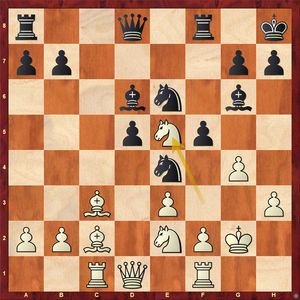 Black went all out to deliver checkmate, but Riazantsev was up to the task by making all only moves and reducing his opponent's attacking potential. 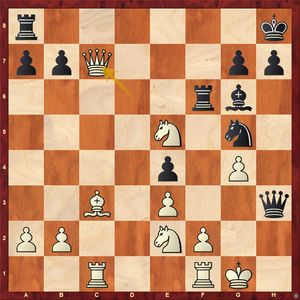 I wish good health even more than luck to all participants! Looking forward to seeing you in two days!