The Russian Chess Championships Higher League has kicked off in Cheboksary. Your correspondent is now in the southern regions looking forward to the Black Sea series and the FIDE World Cup, but it was impossible to neglect an event like this. However, after round one GM Klementy Sychev will replace me as a commentator, and I will rejoin you later to sum up the competition outcome.

The tournament line-ups are usually tough. While men’s section is known for all sorts of respectable people who would not participate in the Higher League over their tight business schedule (for example, coaches of the national team, etc.), women’s section has none missing, as usual. Women are not spoilt for the choice of tournaments and substantial prize pools.

Going into the tournament, I flipped through the latest Higher Leagues reports on our website and compared them with the first pictures from this event. Do you know what has caught my eye? These are some incredibly tense facial expressions! Everyone is usually smiling when being pictured, even with masks on. And here, with +30 degrees in Cheboksary, one can imagine what the participants have to go through. They say the first two hours of round one was a nightmare while they tried to fix the air conditioning. Please do not take it to heart if I show someone’s lost game while he/she was not a happy camper at all. There pop up in mind the pictures of Tyumen-2012 and Kolomna-2016, which took down Ian Nepomniachtchi and such a physically trained matador as Daniil Dubov, respectively. All in all, Higher League is designed for supermen and superwomen who pass unscathed through fire and flood.

Thus, as many as 52 male and 52 female participants (Polina Shuvalova and Aleksandra Goryachkina are fighting with men) have toed the starting line with no facial expressions whatsoever. Of course, our report is not about chess alone — we definitely need a dramatic but instructive episode to accompany the main topic of chess. And what stories chess tournaments would usually be connected with? Let us look into the events of the past. Well, the Kramnik — Topalov match is a Toilet Gate. Children's world championships were not without toilet gates, too. Well, what about Morgunov, Rausis and Nigalidze? It all comes down to toilets, too. All roads seem to lead to Rome no matter how hard you play.

In round one of the Russian Championship Higher League, the toilet gate would not pass by the primary season's qualifier. One of the country’s strongest international masters and leader of the Crimean chess players, Sasha Triapishko, decided to visit the toilet before time trouble. The toilet of the Cheboksary-Arena ice palace was kind enough to let him in, but not out. Being a physically fit person, Sasha fought like a lion, calling for help and even thinking to force the door from its hinges, but he thought again for the damage caused would immediately get him a decent fine. With time control approaching, everyone was tethered to their positions and unwilling to visit the toilet (situated at a decent distance from the playing hall). Triapishko calculated in his mind that there was about 12 minutes’ time still left on his clock, and should the opponent make a move immediately, the linesmen would soon fix overstepping the time limit... 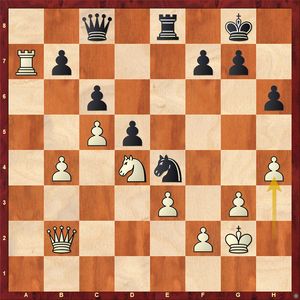 This is an old story, and I have read up on the Internet that similar accidents with toilet traps happened elsewhere, one of them at the Moscow Open, and yet another one at the children's rapid and blitz championships in Minsk. They ended up breaking the toilet handle at the Higher League in Yaroslavl for want of better means. Luckily, it was not a boy who fell victim here, but a young man of a more advanced age.

And then a miracle happened as Ilia Iljiushenok entered the toilet, heard Alexander’s voice and ran to the linesmen for help. They stopped the game clock, and a couple of repairmen were summoned, who said the lock worked tightly indeed but still managed to unlock it even if not immediately. Over the moon with his luck, Triapishko rushed back to the playing hall to achieve a winning position only a few moves later! Is it not an inspiring miracle of salvation?

Most of the favorites have won their games in the men's tournament, but it was not without misfires. Thus, Triapishko’s fellow countryman was one of those lucky exceptions. 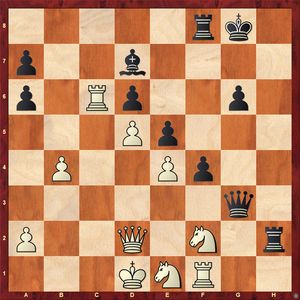 A well-known specialist in King's Indian Defense, Demchenko has again delivered a master class in his favorite opening, but shot wide of the mark at the decisive moment. 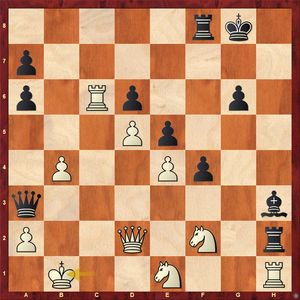 Alexander Truskavetsky has emerged up a piece and brought the game to victory despite his opponent’s attempts to aggravate the struggle.

6.Ndb5 could have been met by the Chelyabinsk-like 6…d6, as well as by the modern approach 6...Bb4 7.a3 B:c3+ 8.N:c3 d5 introduced by Vlad Artemiev. White has alternative continuations at his disposal. Thus, 6.Nхс6 bc 7.e5 launches mind-boggling complications. The Russian team coach decided to test Makarian's knowledge of rare line, but his counterpart was up to the occasion.

White plans to grab the rook, but Black comes back by occupying the center and getting powerful compensation. 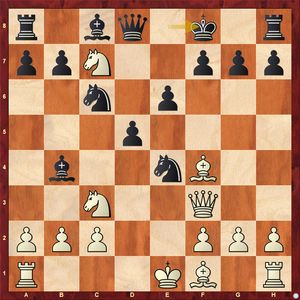 Finding himself in this position, the Indian talent decided that enough was enough and forced a draw with 15.Ke2 Nd4+ 16.Ke1 Nf3+, Gukesh — Dreev, 2019. Motylev is still in the realms of the mainline theory, and soon after there arose an interesting position in which Makarian's queen was opposed by a bunch of white pieces. 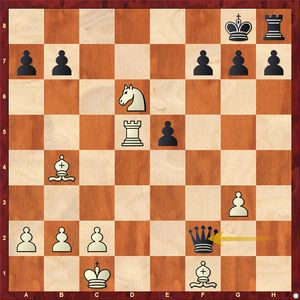 It was only recently that a chess player flying the FIDE flag has suffered in this position after: 22.Bc4 Qe3+ 23.Rd2?? Qe1+ 24.Rd1 Q:b4, and Black won in Firouzja — Rapport, Paris 2021. Alexander opts for a different continuation, and Makarian gives the queen back, and the resulting position gives us the battle of the resurrected h8-rook and pawns against a pair of minor pieces.

It has not been without a predecessor correspondence game, or course: 25.Bc3 b6 26.Kd2 f6 27.Ke3 Kf8 28.Kf3 Ke7 29.Nb5 Kd7 with a draw, as in Brunori - Ploscaru, ICCF email 2018. It feels a bit more pleasant to be White in an over-the-board game, but Makarian may claim knowing 20 moves ahead to make a sure draw. The national team coach misplayed the knight to a direction different from where the Black's passed pawns were, which could have spelled problems for him. 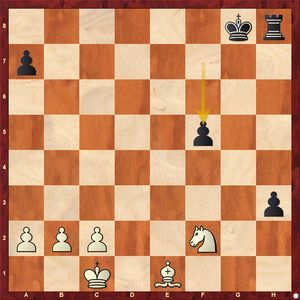 The black passed pawns have appeared as if out of thin air! 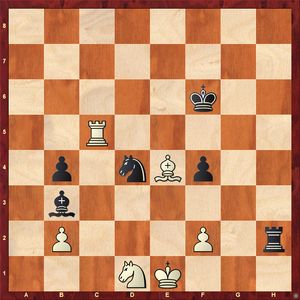 In this very interesting game Black was pressing, but to win the game he needed to discover the idea of catching the opponent's bishop along the central diagonal!

This is the classical rook and bishop vs rook position.

Alexander Predke has won an excellent game thanks to his brilliant preparation.

Unlike proven ordinary lines, Black immediately causes a crisis in the center, but the stakes are very high, and the home analysis must extend deep enough. I suspect that Predke devoted many hours to this position over long Yekaterinburg evenings spent at the training camp at the famous Mining University. This black side of this setup has seen Dubov, Nakamura and other famous GMs on many occasions.

Black pins hopes on his active pieces to win back a pawn and solve all his opening problems. 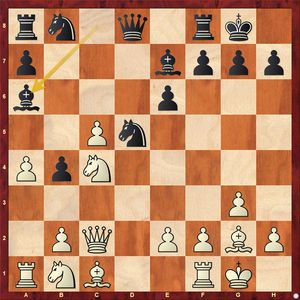 The principled and challenging continuation appeared in 2019. The trade of knights on d5 makes it harder for Black to deal with the c-pawn.

Playing Carlsen, Ding Liren moved the pawn to c7 immediately and lost the game, but Boris Gelfand improved White's play in the same year of 2019. 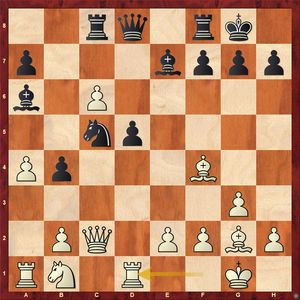 16...d4 17.h4 is the mainline theory, in which a well-versed opening specialist’s knowledge should extend some 10 moves ahead. Chess has advanced this far, isn’t it amazing? Each time I write a report I repeat that move 20 is only the beginning of the theory. Roman Kezin opted for an obvious move, but fell victim to the cavalry’s raid.

Black cannot capture the c6-pawn because of the bishop capture on d5, and although the exchange down, White has a powerful passed pawn, supported by no less powerful bishops. Black should have returned the exchange in an attempt to bail out after 19...Qe8 20.B:d5 N:b3 21.Q:b3 R:c6 22.B:c6 Q:c6 23.Rc1. The text puts him in a difficult situation immediately. 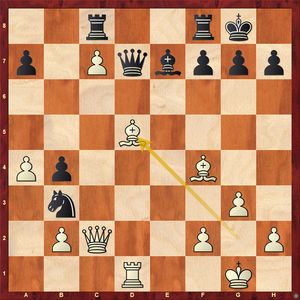 Because taking on h3 fails to save the game, Black stopped the clock.

In the women's section, the favorite players were given a hard time right from the start. 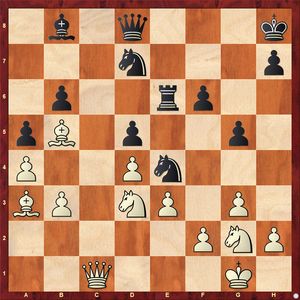 As 36.dc R:c6 is out of the question, White needs to retreat the bishop.

After 40.B:d6 R:d6 Black will gradually convert her material edge. 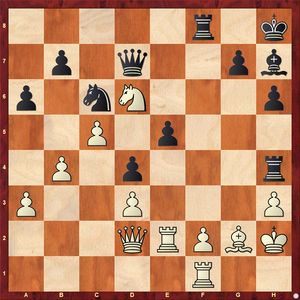 Ekaterina Nasyrova is always after checkmating her opponent's king, and here White has given the Tatarstan chess player exactly such opportunity.

This is knockout blow in the style of Fischer and Tal.

We wrap up by reminding the rewards of studying the books by Dvoretsky, Shereshevsky and of endgames in general. 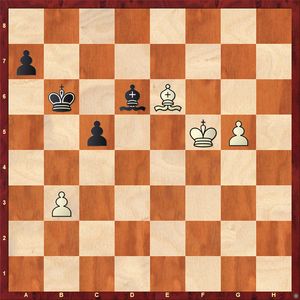 I wish good luck to all participants and good atmosphere in the playing hall. As for me, I am off for another tour of the Black Sea Grand Prix that is about to begin soon. I leave you for the next six rounds with GM Klementy Sychev. See you next time!