The events of the third round demonstrated that the schedule had been designed by a very sensible person. I don't think any of the participants can object a rest day. They went from zero decisive games in the first round to all decisive games in the round three, and the average length of games exceeds 50 moves. The pressure skyrocketed to a level at which games are decided by unfortunate errors. The less lucky need time to repair themselves, the more lucky should also be quite happy about an opportunity to rest and rethink the situation.

Nana Dzagnidze and Aleksandra Goryachkina were stronger than others during the starting stage.

In the game against Anna, Nana got a good game after the opening, and then seized the initiative after an inaccuracy by her opponent. 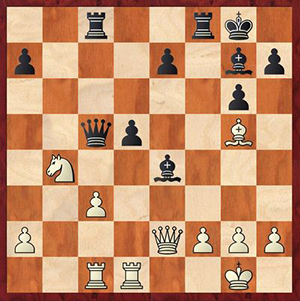 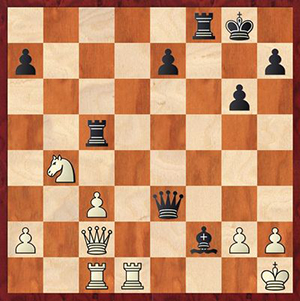 The rook is being transferred to the queenside. An attempt to block it by 26.Nd5 is met by 26...Rxd5! 27.Rxd5 Be1! The brilliant bishop move follows to 26.Rd3 as well. After 26.h3 Rh5 27.Qd3 Qe6 White is worse, but there is still everything to play for. Anna did not manage to overcome her difficulties and ended up under a crushing attack.

Mariya Muzychuk was surprised by Nana in the Meran Variation. White made a rare but by no means unknown move 12.Ne2, which had been played dozens of times even at a high level(for instance, Goryachkina lost to it twice, although her losses had nothing to do with the opening), and in response the ex-World Champion gave away a pawn and the bishop pair. Further simplifications followed, the game transposed to an ending, and Dzagnidze slowly but surely converted her advantage.

Aleksandra Goryachkina convincingly won the first half of the short version of the Russian championship. She could have won all three games, but missed a clear goalscoring opportunity against Kosteniuk. 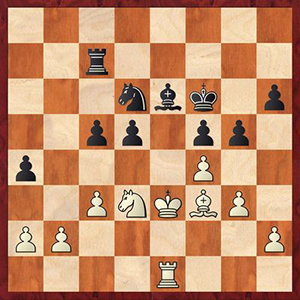 In a complex ending, the sides fought evenly for quite a while, but then trading a couple of rooks left White with fewer active options. One can certainly understand Kosteniuk's reluctance to devalue her pawn structure by а2-а3 or to make the ugly-looking recapture after 43...a3!, however, after44.b4? cxb4 45.cxb4 Black broke into the White's camp.

Apparently, Goryachkina wanted to create a passed pawn as soon as possible, so the opted for trading the pawns.

Here Black once again did not dare to throw her rook to the opponent's side of the board. 48...Rc2would initiate a tactical battle, allowing Black to utilize her main trump. 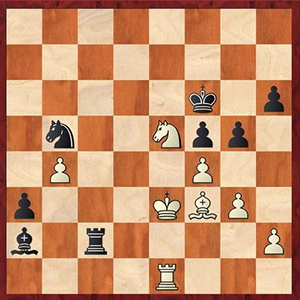 The longest game of the starting three rounds was decided by a brilliant sacrifice of the knight which on multiple occasions could have been removed from the board. 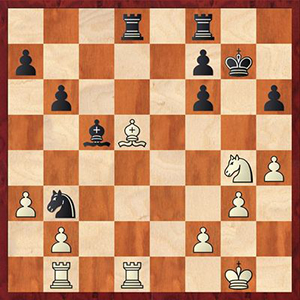 Aleksandra was better prepared in the opening, but initially it only gave her an advantage on the clock. Now White can utilize the open file for a rook invasion, not fearing a temporary pawn loss: 33.Rd7 Bxe3 34.fxe3 Rxe3 35.Kf2 Re5 36.Rxa7. Considering the difference in piece composition and pawn structures, Black must work hard to survive.

While here after 36.Ng2! (shouldn't we recall the 9th game of the first Karpov-Kasparov match?) Black's situation became highly unpleasant.

Gunina was forced to stand still. Only after a two dozen moves she managed to activate her forces, and not without material concessions. 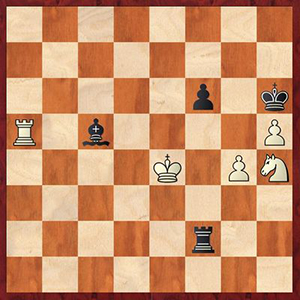 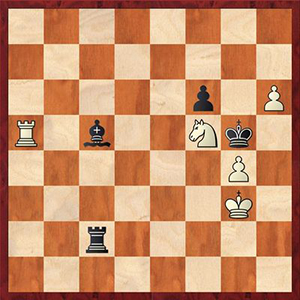 68...Kg6 69.Ra8 Kh7 gives Black good chances to survive, however, in order to prefer a passive approach one needs to see what is wrong with an active one. 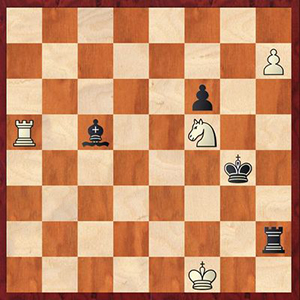 On the next day Aleksandra's persistence was rewarded in an even more dramatic fashion. 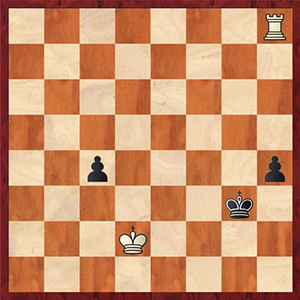 White squeezed the most out of a rook ending that occurred on the 25th move. Perhaps Black could have played more accurately here and there, but objectively the diagrammed position is still a draw. However, Kateryna's next error was way more costly.

54...h3? The correct play is54...c3+, although Black must still answer some questions is various lines. 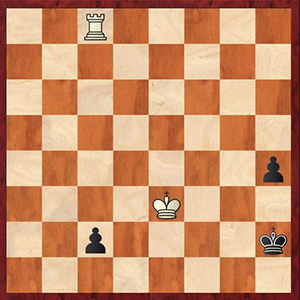 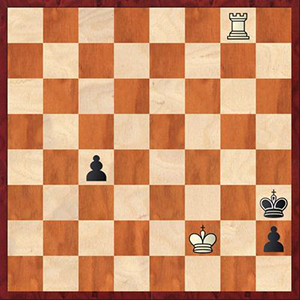 57...h1N+ 58.Kf3 Kh2. Now Aleksandra skilfully, although without tablebase perfection, separates the knight away from the king and pushes the former to a back rank.

Lagno can complain about bad luck, as better positions in the first two games yielded her only a single point. Although her opening play against Gunina was suspect, Valentina made several positional mistakes, and after the first control Kateryna enjoyed an extra pawn and more active pieces. 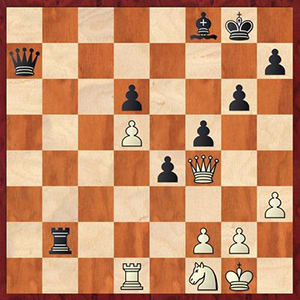 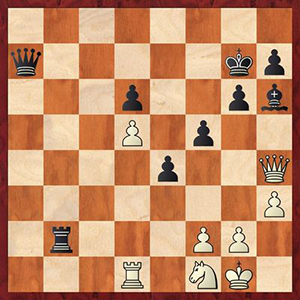 46.Ra1! Qxa1. If Black does not take the rook, her winning chances are gone.

47.Qe7+ Kg8 48.Qe6+ Kf8 49.Qc8+. With a black rook onс2 this check is impossible, and the king can find a shelter on the queenside. (Naturally, in this case White would have rejected the sacrifice in favor of less spectacular defensive ideas.) Now hiding on the kingside in the only option. 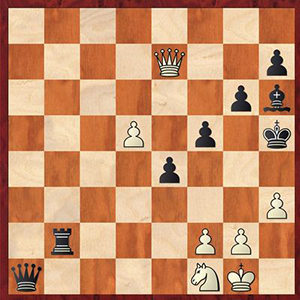 Anna Muzychuk, who is currently on the last place, lost a very disheartening game in the third round. Following the exchange of queens, she initiated a very promising tactical play, but missed a shot after shot. In her defense, the diagrammed exercise has the highest level of difficulty. 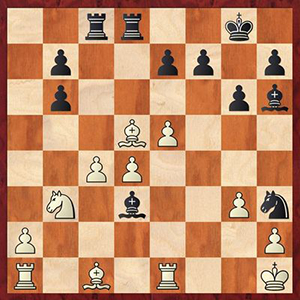 The next mistake, which decided the game, Anna should live through and forget as soon as possible. 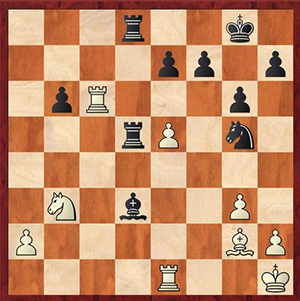 Tan tried to take the material under better conditions, and it worked splendidly for her:29.h4? Ne6? 30.Bxd5 Rxd5 31.Rxb6. White got an extra exchange and converted it without much trouble.

We shall conclude the report with another decisive game, in which both sides showed particularly poor timing. 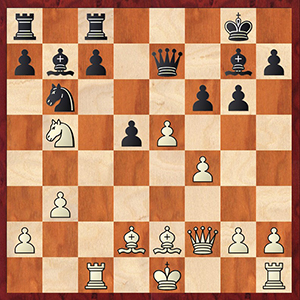 Black just played f7-f6. If only she made this break a few moves earlier, White would have to fight for equality. 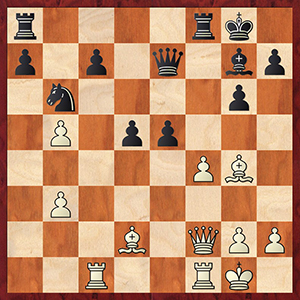 24.Qe1! An excellent move that binds white pieces together. 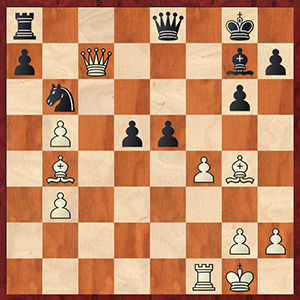 In this position Alexandra made her final mistake. Opening a central file for a white rook is just wrong. After 29...e4 Black can look forward a brighter future.