Aleksandra Goryachkina's two mid-championship victories landed her ahead of Ju Wenjun. It poured emotions into the battles as the champion had no other choice but to strike back. Game nine was a turning point of the match. Lady Luck’s favorite was not clear until almost the very end.

Goryachkina was so close to a game and an overall match victory. There is little doubt that with two points to her good and two white games ahead, the Russian player would have never let it go. Being aware of it as well, the runner-up came all out to grind out an equal endgame. Ju punished the opponent’s endgame blunder to take over in the match.

However, we need to give credit to the world champion. Clearly not in her best chess shape, she still went for it and caught up with her luck at the right moment. However, Goryachkina is a real warrior. She did come back in the final game. Having opted for an adventurous opening, she turned the tides in her favor in what was a game full of nerves.

Now, let’s have a closer look into the games.

An interesting choice. The champion sidesteps the trodden theoretical paths as soon as possible. 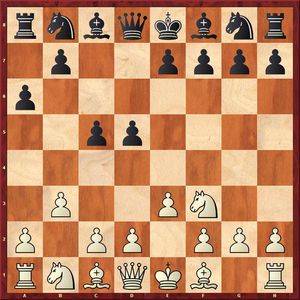 On looking up my opening database, I found out to my surprise that this very modest advance comes as a recommendation against White's opening choice. Being caught off guard, Ju Wenjun’s opening setup turned out quite harmless.

Note that the position is reminiscent of the Petrosian variation in the Queen's Indian Defense. White is up a tempo, though. Along those lines, 4.Ba3 suggests itself.

Looking good is 8...Bf5 to stop the opponent’s bishop from showing up on d3.

This bold knight’s sortie could only be rivaled by 9...Bf5. Black doesn’t mind the doubled pawns as providing good outposts for her pieces and central control in return.

White has absolutely nothing to count on if the light-squared bishop is exchanged off after 10.0-0 Nf4.

The Chinese is not after tranquil and comfortable game, attempting to muddy the waters with wild complications. Justified psychologically, the decision is not so clear-but chess-wise. 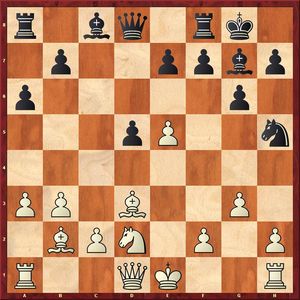 It is hard to be precise in unfamiliar setups. This is especially so when everything is at stake. Alexandra's decision is both logical and wrong .

The e5-pawn does a great job restricting the opponent’s pieces. A cowardly 14.exf6 Nxf6 would have allowed Black to seize the advantage by eventually posting the knight to d5.

The main downside to 12...d4 is that White is now in possession of two vital squares с4 and е4. This attribute renders Black’s position extremely vulnerable.

Ju Wenjun pardons her opponent. After 19.Be4! a good advice is beyond price for Black. Not only does black threaten to take on b7, but also has 20.Bxd4 Bxd4 21.Qc4+ in mind. 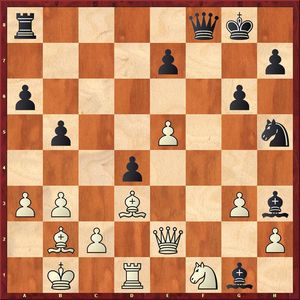 This advance touched off a storm with the fans and match commentators. Indeed, destroying your own king’s shelter looks weird. However, the Chinese player reasoned that making the bishop active via the c4-square would outweigh the downsides, overlooking the critical Black’s rejoinder on move 22 in her calculations.

It is, perhaps, this particular move that deserved a question mark, but White’s idea was precisely in this capture, and not in a computer-revealed 22.Nd2! It was the way for White to go about claiming the superiority: 22...Be3 23.Be4 Rc8 24.bxa4.

White takes no prisoners fighting for the initiative! This is a brave decision and quite reasonable from the human player’s perspective. 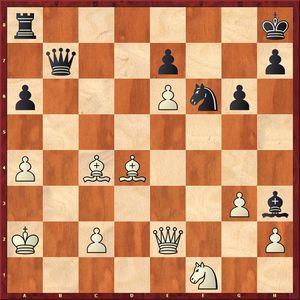 All Aleksandra's previous and subsequent mistakes can be attributed to the complexity and irrationality of the position. Still, here the error stems from the field of psychology, a consequence of high stress. Black, of course, needed to opt for a more logical 27...Qb4!, forcing the opponent to give up a strong bishop with 28.Bxf6+ exf6 29.Bb3. Black has a host of decent moves, and I like the queen centralization 29...Qd4 most as it results in a domination.

Having lost the thread of the game, Goryachkina is marking time with a couple of inert moves.

White has surfaced at the better end of the turmoil. What a pity that in the game that followed Alexandra failed to come up with her famous tenacity in defense. 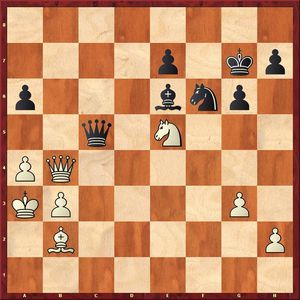 Not only does it give a smooth ride to White, the move has nothing to write home about, objectively speaking. The white king is now unopposed in marching up the board; therefore, 37...Qc7! should have been preferred.

Building up defensive formations without any delays was instrumental for Black’s staying in the game: 40...Nd6 41.Na5 (41.Nd2 Nb7!) 41...Ne4. It allowed Black to get at opponent’s pawns, thus discouraging her king from moving forward.

The far-advanced king renders Black’s chances of staying in the game completely illusory, and the Chinese went on to convert her advantage. 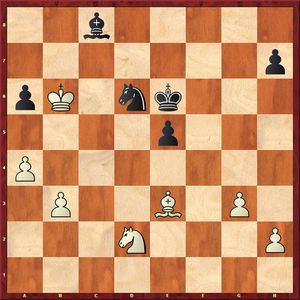 This is the reason of Black's unwillingness to develop the bishop to f5 all the time. 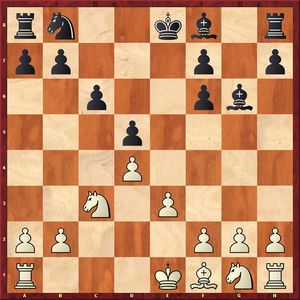 This endgame has served as ground for endless battles for several decades now. It has for long been considered that a compromised pawn structure is not something to enjoy as Black and that White achieves advantage by simple logical means. Then Black managed to come up with good ideas, and the next blow to the variation was delivered by the Carlsen-Kramnik game, in which Magnus uncorked a fresh idea. Goryachkina follows in the footsteps of that game.

This is the Carlsen’s idea mentioned above. White aims at taking control over the crucial f5-square.

White's structure is compromised as well now. On the other hand, it cost Black his good dark-squared bishop. 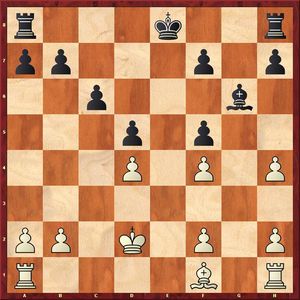 What a picturesque formation of pawns! I have found this and other games in this line very instructive. This is quite a treatment to give to your pawns and a bishop!

This is the first critical moment. 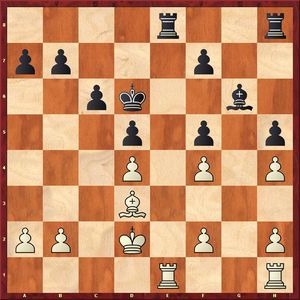 I won't claim that 21.Re5 f6 gives White a significant edge, but it indeed promised many more opportunities to take down the fortress:

2) 22.Re3!? Rxe3 23.fxe3 Ke6. The position is similar to the game with the only difference in that the pawn is on f6. Black's task is more difficult as the black bishop is no longer safe on g6.

The objective evaluation is equality. Frustrated by not converting the opening advantage, Alexandra persists with her adventurous play, offering Black not only a draw, but something more than that... 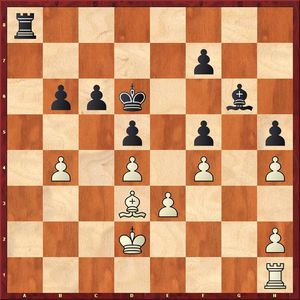 When watching online, I was anxiously aware of how much it had become anybody's game by that moment. White is still in control, but the nature of the position is not to Aleksandra’s style. She did want to bounce back after an annoying defeat, and emotions took the better of her.

The pawn structures of both opponents are hopelessly compromised, and it seems impossible to convert an extra pawn. The engine writes equality to almost any moves from both sides, and this is an objective evaluation. 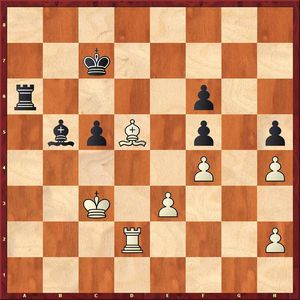 The time control is over, and Black's pieces have come into the play. White's desperate persistence is not at all apparent. 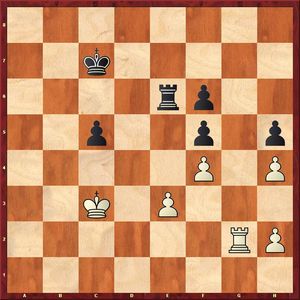 Zugzwang. White has to fall back even farther now. 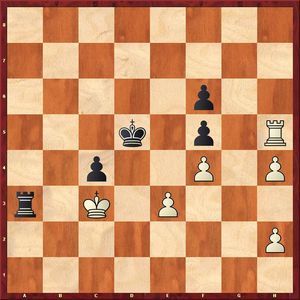 This is a sort of mental blackout. This decision can only be explained by severe psychological fatigue. The cutoff king is an immediate downfall for White.

This game was one of the most tranquil in the match. That the Chinese champion would not take risks was obvious, but many a person were looking forward to aggression from Goryachkina. It brings back the Kramnik-Leko match of 2004, when Vladimir, being in a similar situation, played sharply as Black to put pressure on his opponent, and in the last round, he achieved the desired victory as White and retained the title. Goryachkina chose a different scenario. It was safety first after two annoying defeats.

A notorious Berlin endgame arising after 6.Bxc6 dxc6 7.dxe5 Nf5 8.Qxd8+ Kxd8 has fallen out of favor with those playing White. 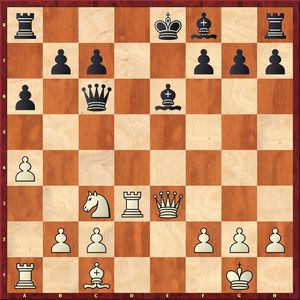 It is hard to believe that White can pose real problems this way. Going into the world championship matches, such lines are analyzed to a draw! 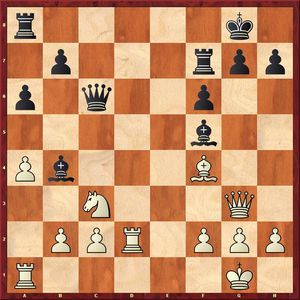 The most precise. Thanks to the bishop pair, Black could have continued even down a pawn.

This is a dead draw. To comply with the regulations, the opponents play on until move 40.

There are players who do exceptionally well when it comes to must-win situations. They cope with emotions and win “on-demand”. Aleksandra Goryachkina is one of them as her career abounds in medals ground out in last rounds. This game had a world championship title at stake.

I put an exclamation mark with the outcome of the game in mind! The surprise move paid off in a big way. Taken out of her comfort zone, the champions burned much clock in the opening. 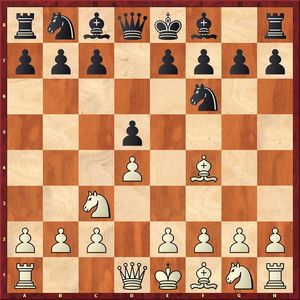 This is an Italian game with colors reversed! I associate this line with Baadur Jobava, who has employed it in dozens or even hundreds of games at any level. The opening suits the creative style of Georgian grandmaster perfectly, but Aleksandra Goryachkina seems to possess other trump cards in her arsenal...

A more accurate 3...a6 has come to the forefront as of lately. It can be followed by 4.e3 e6 5.g4!, plunging headlong into complications...

It comes down to misplacing the black knight on a6.

I think this shuttle maneuver is ill-advised in this setup. Completing development with 5...Be7 6.Nf3 0-0 is a better plan for Black. I once tried 5...c6 6.Nc3 Nc7?! only to realize that с7 is one of the worst placements for the knight... 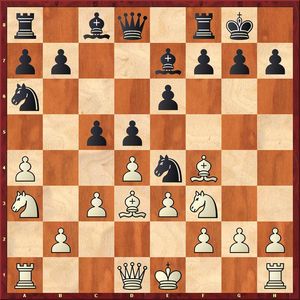 This prophylactic move feels like a loss of time.

There was no reason to give up the light-squared bishop. It was probably worth considering 13.Be2 instead.

The challenger’s cavalry is neutralized. The e5-knight is exchanged off, and a6 drives his fellow to the rim of the board.

I have already mentioned the c7-square. The c2-square for the white knight is no better than that.

Upon serious consideration, grandmaster Stockfish suggests bringing the knight back to a3 and then sending it via b1 to d2. Fortunately, Alexandra did not go that deep and carried out a thematic breakthrough in the center instead.

Here the knight is closer the theater of action. 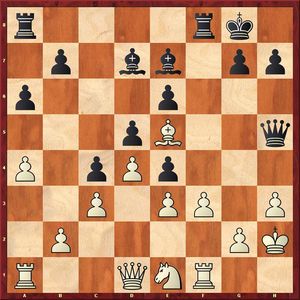 Black was not obliged to help improve the position of white pieces. 21...a5! was by far stronger, fixing the white pawn on а4 and turning it into a target. Black wins after 22.fxe4? Qxd1 23.Rxf8+ Rxf8 24.Rxd1 dxe4; however, White is not obliged to go for it.

Ju Wenjun succumbs to pressure, producing a series of weak moves. The queen belongs in the thick of things: 26...Qd3 27.e4 dxe4.

The engine offers a mysterious 27...Qg6, intending to plunge into complications after 28.exd5 Rxf4. 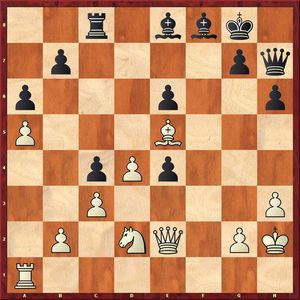 The champion sends the pawns for slaughter. I assume that Black missed White’s 32.b3. Or, perhaps, something else for that matter. White is slightly for choice now; instead, Black should have retained material balance with 30...Bc6 31.Nxc4 Qg6. 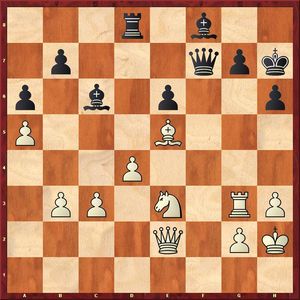 White is still winning. Goryachkina brings the game to a desired result.

Commenting this game, I already know the outcome of the tie-break. Goryachkina was pressing in the classical and rapid parts of the match, but ended up on the losing side of it nonetheless. Resilience and experience mean a lot in a competition of this magnitude. I am confident that this is not the end of the championship road for the Russian player. We also congratulate Ju Wenjun on her third consecutive champion's title!