The hot contest for leadership in the men's Superfinal continues. Sergey Karjakin, who seems to have found his inspiration, is still at the top, but he is now accompanied by the persistent Ian Nepomniachtchi, who had defeated Alexey Goganov and Mikhail Antipov.

Antipov tested 6. a4 against Vitiugov.

This is a hesitation. 9.Bxe6 fxe6 10.Nh4 looks more interesting, and Black finds it hard to cover the exposed squares.

This is the root cause of his further difficulties as he should not have weakened the d4 square. The spirit of the position called for 12. Qd3 0-0 13.Rd1, and the position is approximately equal.

This is not bad, but better still was the straightforward 14...Nd4. 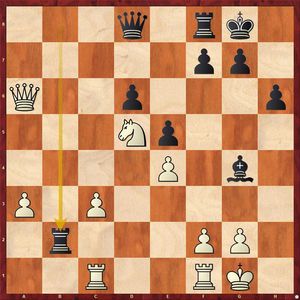 Ian's pieces have emerged active out of the tactical complications, and ...Bе2 is in the air. Mikhail needed to be extremely vigilant.

This move suddenly turns out to be a crucial mistake, and the Candidates Tournament leader presses his advantage home in a gracious style.

It suddenly became clear that there is no stopping ...Bf3 in any satisfactory way. 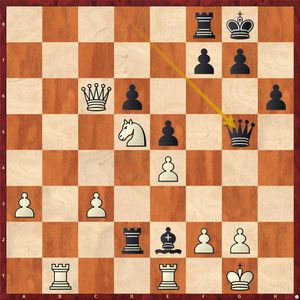 This desperado exchange sacrifice stops the checkmate, but loses the battle.

White stopped the clock in the face of the inevitable checkmate. 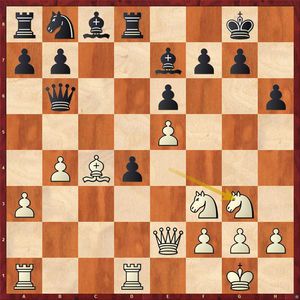 Suddenly, a critical moment has crept in, and Goganov fails to take a proper decision.

It makes sense from a strategic point of view (gaining control of the c5-square), but Black is already lagging behind in development; he should have focused on his army's immediate mobilization instead. 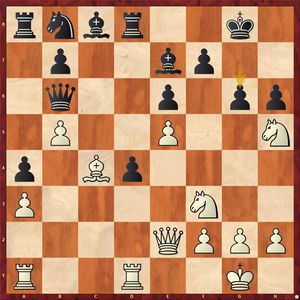 That this position is conducive to the combination is only natural. A sacrifice the shortcut to success.

The white figures are about to crush on the black monarch. The rest is easy.

The duel of two promising Russian players, Daniil Dubov and Vladislav Artemiev, aroused great interest, and the GMs gave us a vivid battle.

Daniil sidesteps the mainline theory arising after 6. Ndb5, especially considering that Vladislav had no problems in the first-round game against Nikita Vitiugov.

In his turn, Artemiev goes for safety, dismissing the complications after 6...Bb4. Especially considering that White must have had something up his sleeve going into this line.

Also, of interest is 8.g4 encountered in the So – Carlsen game.

Dubov invites the fire. More prudent is 9.f3 or 9.f4 so as not to commit his king's position yet. 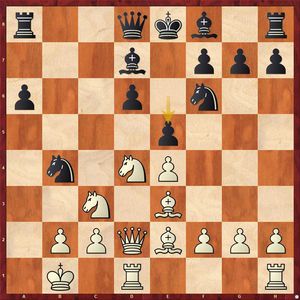 This is a significant inaccuracy that leads to many troubles. 13.Nb3 is correct, and despite the obvious progress it is not easy for black to keep up the offensive.

It is this rejoinder that the native of Moscow must have underestimated in his early calculations. Now White is on the verge of defeat. 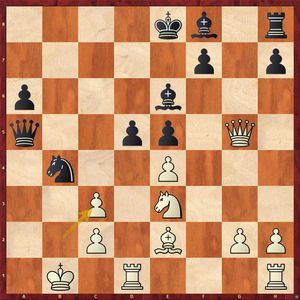 Unfortunately, after much thought, Vladislav could not find the right way through the maze of complications and had to settle for a draw.

A game typical of modern computer chess was played between the youngest and oldest participants of the competition – Andrey Esipenko and Peter Svidler. The young chess player subjected the multiple-time Russian champion to a severe test in his favorite Grunfeld Defense. 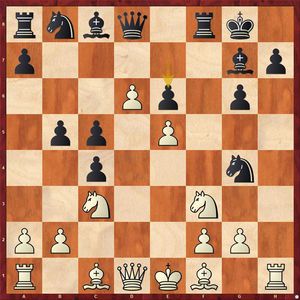 This rattling rook sacrifice is only the beginning of the lengthy home prep. 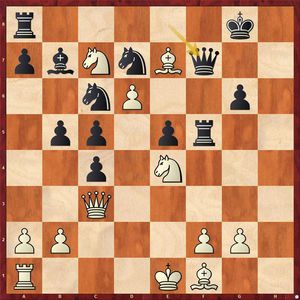 A seasoned Svidler spent about an hour recalling the lines or calculating the upcoming complications. Anyway, the GM was up to the task.

Black has quelled the opponent's offensive, and White has to repeat moves. 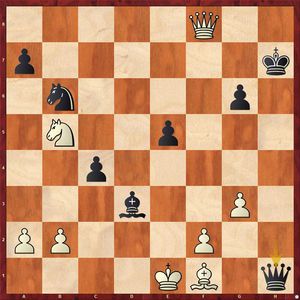 Polina Shuvalova is at her best. The Junior world champion has scored three more victories: she defeated Tatiana Getman in a classical fashion, outperforming Valentina Gunina in a difficult fight and outplaying Natalija Pogonina in her trademark Catalan Opening.

This crucial position has become the hotbed of ferocious theoretical battles. 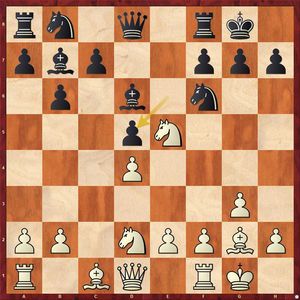 This is the point of White's idea. Exploiting the pin, the white knight rushes to the coveted post on f5.

It's time to take stock of the opening: White enjoys comfortable pressure, but it's not easy to succeed. It is all the more instructive to see the competition leader's approach to the situation that has arisen.

The knight is somewhat passive here. 17...Na6 should have been preferred as Black tries in a number of lines to carry out ...c5 or reroute the knight to the e6-square, where it supports potential counterplay with ... g5. 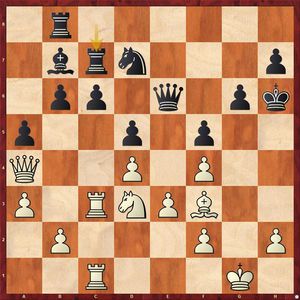 Seizing the moment to open up the game, Polina launches the offensive.

It is difficult to point out where Getman went wrong, but her position is falling apart. 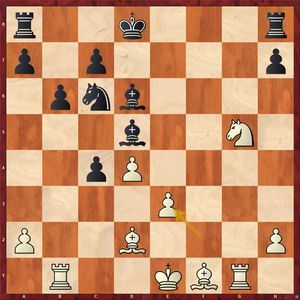 The critical moment occurred on move 25. Black won a pawn in a complex line of the Ragozin variation, but White's pieces are very active.

An error in a position rich in tactical resources.

However, let me add that it was not easy to spot and correctly evaluate the consequences of 25...Re8 26.Rb5 Ne7. It is important that after 27.Rxd5 Nxd5 Black is safe from the knight fork on f7 and looks forward to pressing home her up exchange advantage with 28.Bxc4 c6 29.e4 Kc7.

Valentina does not fail to profit from this opportunity. 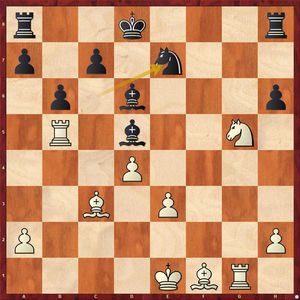 In the case of 28.Rxd5! Nxd5 29.Nf7+ Kd7 30.Nxh8 Rxh8 White drops the h2-pawn down the line, but her bishop pair and robust center make her position even slightly superior.

Black retained an extra pawn and, even if the conversion stage was extended into five dozen moves, there was never any doubt about Black's final success.

Polina continued her winning streak in round six, but at one point everything could have turned upside down for her. She got a big advantage from the opening (see the comment to move five of the game Shuvalova –Getman), but Natalia put up a stubborn defense. 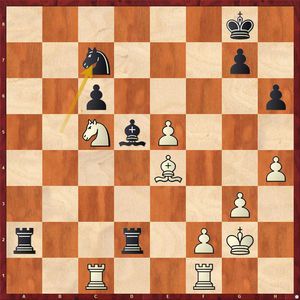 The precise 46.Крg1 would have kept all chances of success, but there suddenly followed

Now White takes control of the situation once again.

A decisive error. She should not have exchanged the bishop that cemented her position.

It is not that easy for White to succeed after 47...Kf7. Now, after

The c-pawn dropped soon, adding yet another success to her otherwise amazing winning streak!

Nevertheless, the intrigue has not died yet: Shuvalova, who wins in the spirit of Beth Harmon, is pursued by the tournament rating favorite Aleksandra Goryachkina. She managed to defeat Alisa Galliamova, drew Kosteniuk as Black, and outplay the tailender Grigorieva, although not without some surprises along the way. 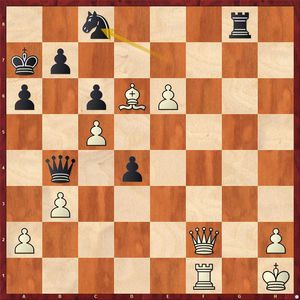 Yulia Grigorieva, the first-timer of a prestigious competition, has outplayed Aleksandra Goryachkina in a difficult fight and, last but not least, the time control is over. White has an extra pawn, and this is a dangerous passer at that.

The cost of this procrastination is too high. 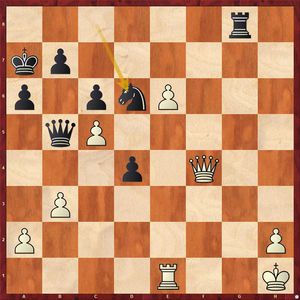 Thus, it all hangs, to a greater extent, on a head-to-head encounter between two promising Russian players; let's see who Lady Luck will side with! With more than half the distance over, the intrigue remains, and the most interesting is still ahead of us at the home stretch.