At the previous stage, 50 % of the matches had ended in play-offs; in the third round, their number increased to 75%. The struggle in the tie-breaks was more vigorous as well: in 2 matches out of 8, 25-minute games were not enough to determine a winner.

The reigning World Champion’s advance into quarterfinals was the most confident of them all. Playing with Black in the first game against Zhai Mo, Ju Wenjun had easily solved her opening problems, then refuted the exchange sacrifice attempted by her fellow countrywoman precisely and realized her advantage. In the return duel, Ju played out the leak-proof Maroczy Bind, not giving her opponent a single chance at sharpening the play.

The only other player to secure an extra day-off for herself was M. Muzychuk. However, in the first game against sensational Alinasab, the former World Champion escaped by a hair. Having deviated from theoretical mainline in the Chelyabinsk Variation, Muzychuk did not show activity in the center on time and found herself a pawn down in a bad position. After the game transposed into a queen ending, the Iranian successfully managed to hide her king from checks for a long time, while simultaneously pushing her outside pawn. 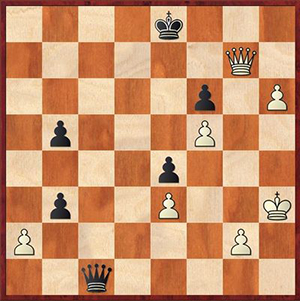 On the next day, it was already Alinasab who went for a continuation that theory does not exactly approve of. Muzychuk, following her sister’s game from the Ukrainian Championship of 2014, gained an advantage because of Black’s chronic pawn weaknesses and her king’s exposure. Subsequently, White loosened up the opponent’s position with her clever maneuvers and finished the matter with a combinational storm.

After the first day, it looked like А. Muzychuk was not going to have serious obstacles on her way to the next round. Her fifth consecutive championship win was a wipeout. The opening pattern was the same: playing Black in the Petrov Defense she was unaccustomed to, Stefanova turned off from mainstream highway to a side road for some reason    and lost control of her “vehicle.” She was late with developing her queenside pieces, then allowed white rooks to invade along the central file in a picturesque fashion and suffered great material losses.

A. Muzychuk - A. Stefanova 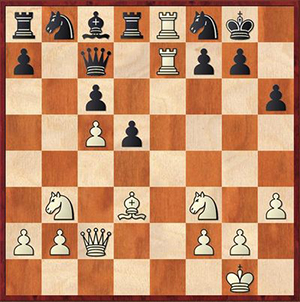 However, in the second game Muzychuk, after obtaining comfortable play, made several ill-considered moves on the kingside, slightly panicked and gave up a pawn. In the ending, she had chances for a draw but kept on playing nervously, and Stefanovarealized her advantage.

In the first tiebreaker, the former World Champion’s rook got lost on the kingside, but Muzychuk chose a far-from-perfect continuation and had to return material presently, resigning herself to a draw.

With White,Stefanovaentered a variation where she had lost a blitz game to Koneru once and stood worse as early as on the move 12. Later, hoping for her queen’s counterattacking sortie, she allowed black pieces to take threatening positions in the neighborhood of the white king’s residence but overlooked a powerful blow. Muzychuk mated in several moves.

Tokhirjonova won her first game against Gunina after the latter, wishing to avoid from drawing continuations, allowed White to create a passed pawn and then to advance it with a decisive effect.

In the opening of the return game, the Uzbek girl made her opponent a present of both bishop pair and initiative and then temporarily sacrificed a pawn in the early middle game when her king’s position was insecure. It was more than enough for Gunina – after her breakthrough in the center, the opponent’s position crumbled.

Tokhirjonova won the opening battle in the first 25-minute game and gained an active setup. In order to finish development of her kingside, Gunina gave up a pawn and attempted to overtake the initiative with a bishop thrust. 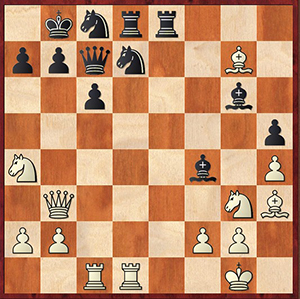 By means of an exchange combination 21.Rxd7 Rxd7 22.Nc5! Ka8 (there is a threat of Na6+) 23.Bxd7 Bxc1 24.Bxe8 Bxe8 25.Qc3 (engine points out that 25.Qg8 is even stronger), White managed to retain her extra pawn and magnify her positional edge. Soon another tactical operation followed, after which queens disappeared from the board, and Black found herself two more pawns down.

Faced with necessity of striking back for a second time, Gunina launched an unprepared attack in the universally known Queen’s Indian tabia, and this tactics nearly scored a success for her. Having taken two pawns, Tokhirjonova neglected to take measures to secure her king’s safety, and White obtained a chance to continue her assault. However, Gunina immediately made a mistake of allowing another exchange combination. In the end of the forced variation, Black, by means of a clever trick, managed to retain both her material and positional advantage, so there was never a risk of her losing in the unequal battle that followed. With her final blunder, the Russian player allowed the black pawn to queen.

In the middle game of the first regular duel, Abdumalik carried out an unsuccessful knight’s transfer. Zawadzka gained an advantage that became decisive after a couple of other aimless Black’s moves and counterraid of white equestrian was far more effective.

In the second game, the Kazakh player played out the Ruy López in the spirit of the Danish Gambit. Zawadzka did not go for material gains and obtained a decent position, but in the interval from move 19 to 24, almost every her decision was at best second-rated. White activated her forces dramatically, regained the second of the sacrificed pawns and, after another error, set about harvesting.

In the first 25-minute game, Zawadzka played out the much-obliging Center Counter Defense, but neglected to develop her forces harmoniously. As a result, Abdumalik had a considerable edge by the move 15. She kept developing her initiative with strong and natural moves, and soon her opponent’s position became somewhat tragicomic. 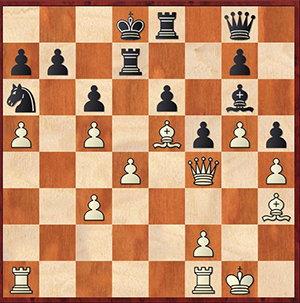 Black’s resistance did not last long.

In the next game, Abdumalik’s original treatment of the Scottish Opening allowed her to equalize quickly. Zawadzka’s exchange sacrifice did not work out for her, and so the character of the following struggle never left any doubt as to its favorable for Black outcome. Nevertheless, for one brief moment there was a glimpse of an off-screen variation that promised hope of a revenge to the Polish player.

Galliamova and Lei Tingjie quickly drew in both their regular games.

In the first tiebreaker, the Russian gained a solid spatial advantage, the importance of which decreased after all the knights had left the board. Then Lei lured her opponent with an exchange sacrifice and got free play as a compensation. White’s position became difficult for playing out in a rapid game, and a careless advance of her king resulted in a decisive loss of material.

Playing with Black, Galliamova kept provoking her opponent into demonstrating excessive activity, but never succeeded. She became overzealous and was left a pawn down without any compensation. Lei, in her turn, was nearly pulled down with her eagerness to simplify, but immediately after exchange of the queens that gave Black a chance to confuse the game, Galliamova committed her final error.

Kosteniuk had to work hard to neutralize Harika’s initiative in the first regular game. On the next day, the Indian managed to solve her problems with black color more easily.

After exchange of the queens in the first 25-minute game, the former World Champion eliminated the isolated black pawn, but Harika’s defense was so stubborn that White seemed unable to retain her last pawns on the board. 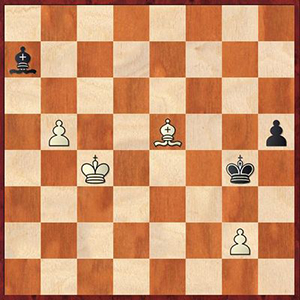 To a draw led 57...Bb6, and 58.Bd4 is met with the bishop’s retreat along the diagonal а5-d8. Black chose a fundamentally different continuation.

In the next game, Kosteniuk got tangled up in an even more inoffensive endgame and  the score was tied.

In the first 10-minute game, Harika failed to benefit from her far-advanced central pawn. Her rook was seven moves late with appearing on the d-file; during this time, her passed pawn had turned from an asset to a weakness, and Black was unable to hold the resultant rook endgame.

In the final game of the match, Kosteniuk, with her precise energetic moves, managed to retain the Catalan gambit pawn. She had lost a share of her advantage in the endgame, but Harika could only dream of a chance to win anyway.

Lagno and Pogonina were the first pair to go into blitz tie-breaks– and were unable to determine the winner even then.

The struggle in the first four games was level and not particularly colorful, so all of them ended in draws. In the second regular game, Lagno had an accidental opportunity to gain an advantage directly before control; Pogonina should have transposed into an endgame with a doubled extra pawn in the first 25-minute duel. With 10-minute control, slipups became more serious, but still both tiebreakers ended in draws.

The first blitz game was smoothly rolling to another peaceful harbor when Pogonina first gave up a pawn in the major-piece ending for no reason at all and then overlooked transition into a king-and-pawn one.

The return 5-minute game was full of blunders, which is both understandable and forgivable. Pogonina, who possessed the initiative, kept missing continuations that won instantly; Lagno kept wasting her drawing chances.

Here is only one (and final) episode for you: 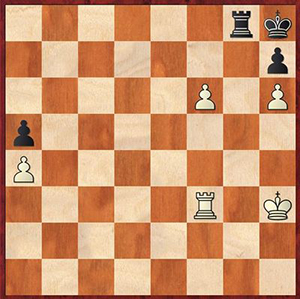 In the Armageddon game, luck was with Lagno who played White. After long Spanish maneuvers, she offered exchange of the queens that objectively led to a difficult endgame; more than that, she had practically none of her extra time left by that moment. However, the outside passed pawn created as a result of this exchange had the last say eventually.