Twelve very strong chess players have come to the FIDE stage in Skolkovo, five of which are flying the Russian flag: Ekaterina Lagno, Valentina Gunina, Alina Kashlinskaya, and two Alexandras - Kosteniuk and Goryachkina, but the number of guests is higher. On a visit to the famous scientific city are Humpy Koneru and Harika Dronavalli, the reigning world champion Ju Wenjun, as well as Pia Cramling, Elisabeth Paehtz, Antoaneta Stefanova, and Marie Sebag! It is no wonder that an outstanding lineup of this caliber produces less decisive output than an average women’s competition; nevertheless, there is no lack of content in the games being played now. The most charged content is delivered by Valentina Gunina, who is in the lead going into round four. However, first things first.

Round one gave us as many as three decisive results; nevertheless, many a player were noted for their scientific approach in aiming at minimum risk, trying to get a small plus and develop it into something significant...This is purely men's chess, so untypical for women! Even the many-seasoned Pia Cramling was unprepared for such a turn of events and went down as White to the reigning world champion. 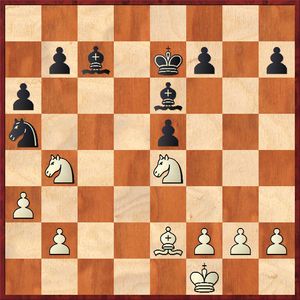 A unique chess player, you want to cheer for Pia Cramling in any event, and added to this sympathy this time was also her conceptually correct choice of the opening - the Trompowsky! Sadly for the Swedish player's fandom, Ju Wenjun proved well prepared, having no troubles achieving equality, seizing the initiative and gradually bringing the point home.


There is no arguing her high class as a world champion!

A pair of bishops in action. The Chinese player's performance in the next twenty moves was virtually ideal.

Cramling undermines Black's strong pawn center, but this is no big deal for Ju Wenjun as she is about to launch her queenside offensive.

A bishop pair advantage is that you can trade one of them when the need arises. Now White is in the defensive down a pawn, banking on the fact that with so little material on the board not everything is lost. However, Ju is of a different opinion. 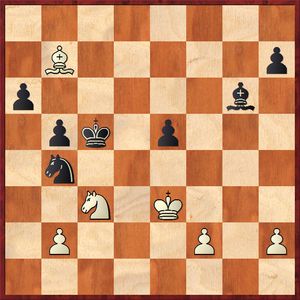 Ten moves later and having committed not a single obvious error, Cramling's position has downgraded from substantially worse to losing.

Not only does this subtle relocation mount the knight into a safe square outpost, but also removes it from the way of own pawns.

There is no marking time any longer, and Cramling gives up yet another pawn. 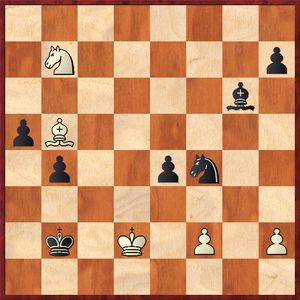 This is the only world champion's decision to be slightly frowned upon, even if unlikely to let the victory go. Slightly more precise is 45...Nd3!, since after 46.Nxa5 Nxf2 White will have to gradually sac both minor pieces to stop Black's passers from raging forward.

Now White has to give up a minor piece. Cramling resigned shortly after.

It is not long before Ju Wenjun is to meet Aleksandra Goryachkina to defend her champion's title. The above game testifies to the Chinese player’s excellent form, and Goryachkina's performance in the same round also proves that everything is in full swing to prepare for the upcoming match. 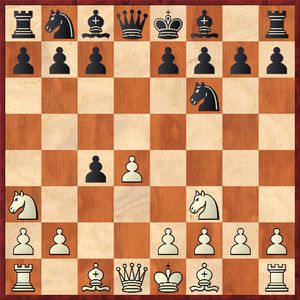 Although not a novelty, this continuation is a relatively rare guest in the tournament praxis that seems to put to shelf the early knight’s plunge to the rim of the board.

White has no time to recapture the pawn as he first needs to take care of the e4-square against the black knight. 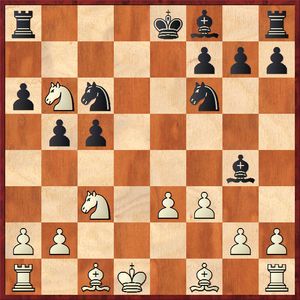 On the one hand, Black is in good shape after 12...Rd8+ followed by Be6, preventing White from untangling her pieces; on the other hand, we would not have had such a fantastic finale but for this slight error.

Antoaneta Stefanova is not to be asked twice, exploiting any opponent’s inaccuracy without hesitation. As the tables are turning, it is now Goryachkina's turn to come up with precise play.

A semi-engine-like 15...Nd8!?, intending to castle short, was beyond Aleksandra; instead, she sends her king forward notwithstanding any pins.

So far, Goryachkina has been following the precepts of old masters (being up material, she uses pieces already in action rather than developing the underdeveloped ones), but now it’s time to return the pawn to complete the development.

22...f5 must have baffled Aleksanda in view of a natural 23.e4, but there is no keeping the extra material anyway, whereas after 23…Nxc1 24.Rxc1 Bg7 Black is in time to finish development. Although more solid, the f6 pawn move is slightly passive and allows White to build up on her initiative. 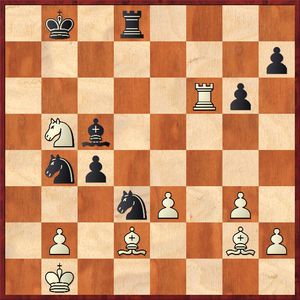 The dust has settled, and White is up a pawn; on the other hand, there is a lack of thinking time, and all Black's pieces are in action. Having consumed her last seconds, Stefanova comes up with a seemingly winning move.

The prophylactic 28.Na3 or 28.Nd4 was necessary towards getting a technically winning position due to a bishop pair and the exposed black king, but what is wrong with the text in the first place? A deadly check from b7 is a threat, after all...

A nice stab! It comes as a reminder that the white king is as unsafe as his black counterpart.

White has a draw in her pocket, but who would take it after enjoying such a safe and easy game?

White could have probed Black with 31.Bc1, agreeing to a draw by perpet after 31…Bxe3! However, Stefanova's followup error in time trouble proves fatal.

Black is the first to cash in! Despite having the move, an extra piece and an exposed position of the opponent’s king, White is unable to escape. Stefanova opted for 33.b3, and after 33…Nxb4+ 34.Kb2 Rd2+ 35.Kb1 Rxg2 went on to defend down a piece. Nevertheless, she had to resign some twenty moves later anyway.

Having started off with spectacular victories as Black, followed by two draws, Ju Wenjun and Alexandra Goryachkina are now going abreast. Their upcoming match is hard to predict, but their upcoming game in round ten is much looked forward to!

Valentina Gunina has yet to reach the world championship match, but her confidence and persistence over the board testify to her desire to achieve this goal in the near future. 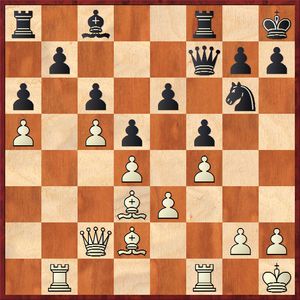 Although down a pawn right now, who cares the material when it comes to Gunina's games?

Alina Kashlinskaya's decision to relocate the inactive knight to e4 is absolutely correct.

Not waiting for the opponent's knight to show up on f6, Gunina launches her g-pawn forward.

I am more than confident that something like 24.gxf5 exf5 25.Bxf5 Re8 never as much as crossed Gunina’s mind– why win back pawns when you can sac yet another one?

The following interesting line is offered by our “iron friend”: 26...Kh7!?, so that after 27.Rg2 Rh8 28.Rbg1 Kg8 not only is Black prepared to hide the king at the queenside, but to protect the g-pawn from h6 with the rook as well. Kashlinskaya has a different idea of giving back the loot to develop her c8-bishop. However, this idea is not without a drawback. 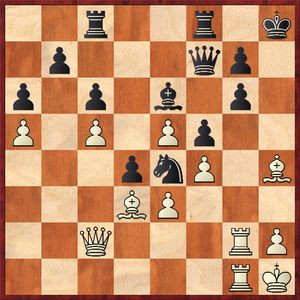 The diagonal has been cleared for the bishop, but not completely as own e4-pawn is a spanner in the works of Black’s counterplay.

32...Rc7!? 33.Qd1 Qe6 34.Qxd4 Rd7 35.Qb2 g6 would have offered a feeble hope to escape. Now it turns out that Kashlinskaya's efforts to clear the pawn center only plays into the opponent queen’s hands. 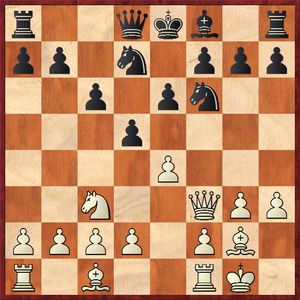 This setup is a frequent guest at various tournaments Thus, Sergey Azarov and Arthur Gabrielian agreed a draw ten years ago after 8...Ne5 9.Qf4 Ng6 10.Qf3 Ne5. Needless to say, our principled girls will never go for a repetition, but Gunina’s followup exceeded all expectations.

A novelty! Indeed, this is a big decision not so much in terms of chess as in terms of psychology.

The far-advanced h-pawn stops Black from castling short, producing ideas of the artificial castling instead. 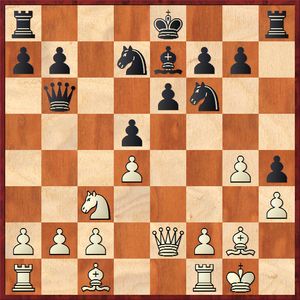 White does occupy the g5-square, but not with the right piece. After 18.g5 Nh5 19.Bxd5 Gunina would have needed to come up with some magic trickery, and even now it is not complete equality yet.

Black's regrouping is finally over! Now that the king is safe and the opponent’s pieces are biting on granite in the form of d5-pawn, Black can trade a couple of pieces and look for counterplay along the c-file.

Pressed for time, the opponents are marking time with their rooks, expecting each other to make some concessions. Kosteniuk was the first to falter. 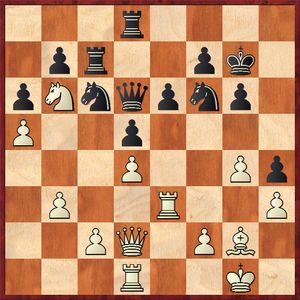 Gunina’s aura is taking its toll once again and at the most opportune moment at that. 31.Na4, followed by Nc5, would have sealed the c-file, upon which Kosteniuk would have needed to come up with some precise defensive play, keeping the material balance level, at least.

So far, our European guests are keeping the situation under control - Elisabeth Paehtz's careful play resulted in three draws, whereas Cramling, Stefanova, and Sebag have scored minus one while fighting to the last bullet and playing real exciting chess. 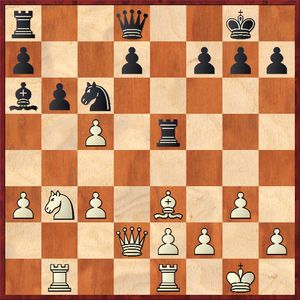 Stefanova's opening has landed her slightly worse, and her sound reasoning convinced her to take proper measures to come back into the game.

There is no saving the queenside, and Stefanova takes immediate aim at the kingside if not to checkmate, but at least to scare her opponent with such an idea.

Another piece of sound reasoning from Stefanova in that you have to suffer for something. Such active sorties as 24...Qe6 25.a4 Qh3 fail to a simple 26.g4. 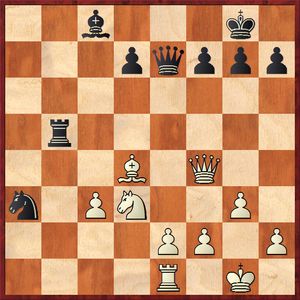 Up to that moment, Pia Cramling’s play was perfect, and no "tricks" worked for the Bulgarian player. Now it remains only to convert decent performance into material gains with some meticulous moves.

With all previous opportunities missed, finding 29.Bb4! d5 30.e4! with only seconds on the clock seems something out of this world. The game went on as follows:

In round three, the Indian players scored crucial victories as White. 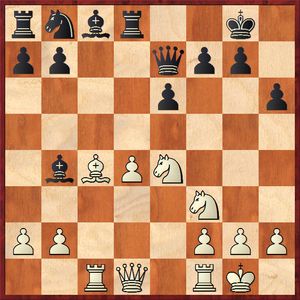 Enjoying the family life, Humpy Koneru was away from chess and came back only awhile ago. However, her deep opening preparation in the trendy line shows that it was time well-spent.

In 2015, Mamedyarov vs. Carlsen saw 13.Qe2 Nc6 14.Rfd1 Ba5 15.Ng3 Bb6 16.Qe4 Bd7 17.h4 Be8, in which White got nothing and was soon outplayed. I don’t know if the Qc2 move was deeply analyzed by the Kashlinskaya-Wojtaszek couple, but my weak engine immediately gives the bishop transfer to c6 as the first line. 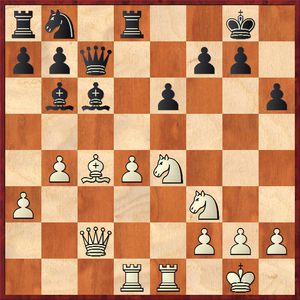 Alina seems to have found a good continuation as she is ready to develop her knight on d7 and follow it by undermining with a7-a5. It all looks good, but the game is over in just three moves.

It takes longer to win after 18...hxg5 19.Nxg5 g6 20.Nxf7!, but the overall outcome is beyond any doubt. Kashlinskaya allows her opponent to finish the game nicely. 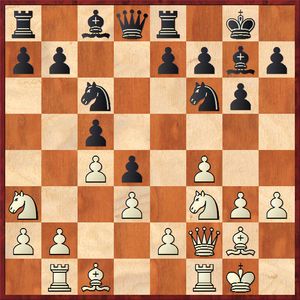 Since Black is unlikely to avoid material losses anyway, it was worth sacrificing a pawn for the sake of trading the dark-squared bishop: 14...Nb4!? 15.Bxb4 cxb4 16.Nc2 Nd7 with some compensation.

No matter how hard the chess players try to play reliable and solid chess, intuition, armed with results of the first three rounds, suggests that 33% of decisive games is a temporary (or variable) phenomenon.  I am confident that many spectacular and decisive encounters will follow this warm-up.