Dmitry Kryakvin reports about round one of the Russian Championship Superfinals

The town of Satka has given start to the Russian Championship Superfinals. You will find all detailed information in Eteri Kublashvili’s colorful reports, as well as in the broadcasts, hosted by our country’s main commentator Sergey Shipov; meanwhile, I will be there to share chess and other impressions with you every other day.

The women’s section has brought together the strongest lineup, every member of the national team present here save for Ekaterina Lagno, missing this event on the most legitimate of excuses. The men’s section is missing a number of elite players, "stolen" from Satka by the action in St. Louis, where our leading grandmasters participate, and the eight-time Russian champion Peter Svidler comment.

I remember the 1960s, when the eight-time USA champion Robert Fischer did not show up for one of the national championships. A hapless New York journalist had a bad luck of pointing out to the tournament as certainly going down into the world chess history. Back then it triggered Bobby’s coming out of seclusion and lashing out with a devastating newspaper article, labelling the reporter a dilettante. As opposed to that, Peter Veniaminovich is known to be a very delicate person, so I expect no such things when sharing the delights of the Superfinals in Satka.

An opening ceremony did not disappoint, at least. Unfolding in front of spectators’ eyes was a live show of the immortal Larsen – Spassky game from the 1970 "Match of the Century", in which Spassky defeated the Dane. Both inside and outside the Magnezit Palace of Culture one could enjoy paintings by Geliy Korzhev, one of the best painters of the Soviet times. Your correspondent specifically delved into reading up on the "unknown Korzhev", which proved an incredibly interesting reading. "A burned tankman” and a number of perestroika paintings is simply mind-boggling.

The stage is decorated with "Hammer and Sickle", painted by the artist in collaboration with G. Chuvelev. 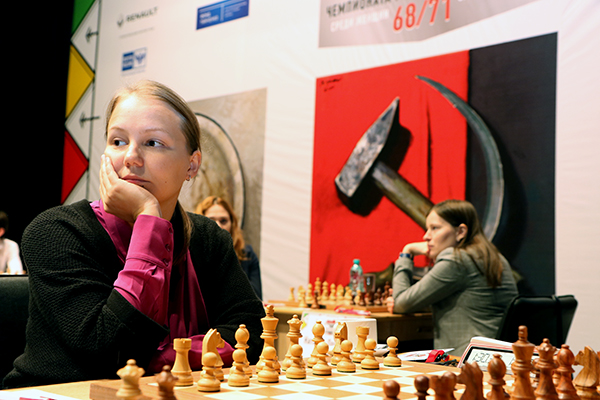 The first game to end in a draw was Sarana – Dubov. Both opponents’ motives are not hard to understand - while Alexey wanted to make his championship debut without first steps being always troublesome, Daniil was recovering from a lengthy road to Satka. A well-known solid chess theme of round one stood out in other fights as well; thus, Mikhail Kobalia drew against Vladimir Fedoseev, Dmitry Jakovenko against Evgeny Tomashevsky, and the microscopic plus of Ian Nepomniachtchi was deftly neutralized by Nikita Vitiugov’s precise play. Grigoriy Oparin versus Ernesto Inarkiev was the brightest matchup.

When seeing this setup first time, Anthony Miles claimed it as giving him an idea of going for 1.с4 е5 2.Qc2!?

This is when Ernesto decided to violate the smooth flow of an English opening with a bold advance of his queen. However, Grigoriy was on the alert. 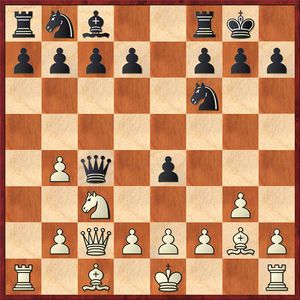 With a wide sweep of his arm, relying on the strength of his bishop pair, the young native of Moscow allowed his opponent to grab some of his material. 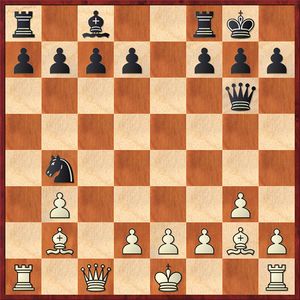 Black could resort to trickery of his own: 15…с5! 16.Qхс5 d6, and, while there is no taking the bold knight, а7-а5 follows next move, giving Black nice development and active pieces. The initiative goes back to Oparin once again.

Ernesto parts with a pawn to complete development. However, the most interesting is yet ahead as White starts opening up the game for his bishops. 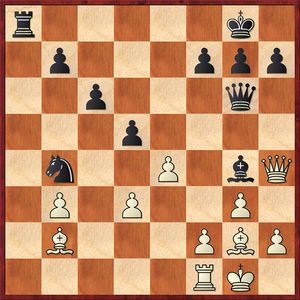 Upon a long-time thinking, the engine votes for 25.h3! Nxd3 26.Ra1 Re8 27.Qxg4 Qxg4 28.hxg4 Nxb2 29.exd5, timely opening the scope for his ranged piece, but the opponents’ maneuvers seemed more than logical from the human point of view. Rooting for Oparin, his coach repeated more than once that the logic of chess dictated that White surely had something at his disposal, but in deviating from the engine’s first line this something evaporated quickly.

However, there was a decisive game. The 2012 Russian Champion and missing many Championships lately, Dmitry Andreikin was surely looking forward to Superfinals. 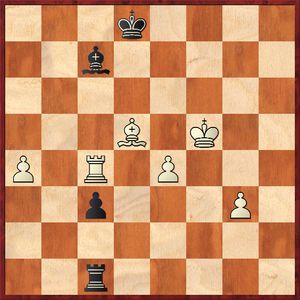 Defending a worse rook and opposite-colored bishop ending on the added seconds is one of the biggest upsets in chess. You feel like a punchbag, being punched by your opponent now from this side, now from that.  Suffice it to recall a legendary tie-break in Kazan between Kramnik with Radjabov, and I myself happened to walk into Khismatullin's "opposite-colored" bishop trap at the Moscow Open-2015.

With the c7-bishop chained to defending the king, the game is suddenly over.

The first decisive result in both tournaments happened in a duel between Valentina Gunina and one of the the 2018 Higher League’s revelations Anastasia Protopopova. Anastasia is habitually great out of the opening, while Valentina is habitually out for fight, keeping a blind eye on certain items of minor importance. However, the follow-up saw a many-time national champion outfoxing her opponent. 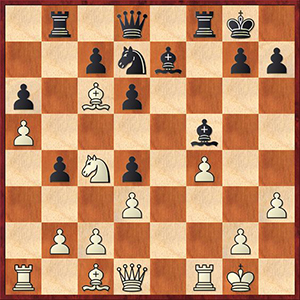 Black hammers the opponent’s queenside. White’s reply could have been modest, but this is not about Valentina.

After 19...Nxd3 20.Bd5+ Kh8 21.Bd2 Nxb4 22.Bxb4 Rxb4 23.Qxd4 Bf6 Black was not in any danger with her bishop pair, but the Saratov player decided to leverage the position, apparently underestimating her opponent’s sneaky fork.

You find it hard to recover from a shock like that with an exchange sacrifice - 21...Rxc4 22.dxc4 Bxc4; however, this would have been the lesser of evils. Capturing on b4 now gives Black a gorgeous compensation, but taking the rook is not a must.

The ultimate error. The pawn should have been blocked with 22...Rb3. 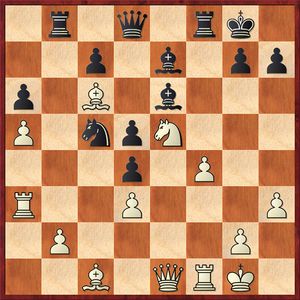 While each game in women's chess is known to last almost to lone kings, tactical lightnings flash even in equal positions. 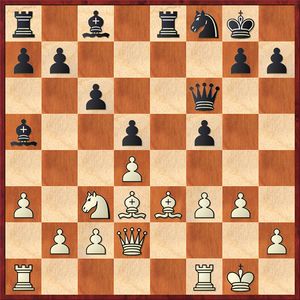 As opposed to that, another duel gravitating towards a draw saw Black employ a strong geometrical motif. 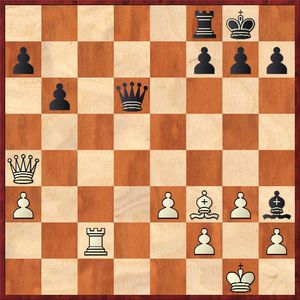 Alisa Galliamova outplayed Alexandra Kosteniuk in the opening and succeeded in bringing her edge home.

Following in the footsteps of the 2010 Olympiad in Khanty-Mansiysk, where this move was used against Alexandra by an opponent from India.

This is an improvement, whereas Karavade had opted for 11.Nbd2. Was it probably worth trying 11…b6, followed by а5 and posting the bishop on а6? It does not look like complete equality, though.

Alexandra gives the material back for the sake of development, but

16.Nd3 0–0 17.Nc3 Rd8 18.Nxd5 Nxd5 19.Rfc1, and further developments proved superiority of the c-passer. I am confident that this event will yet see Alexandra Kosteniuk come up with an improvement of Black’s play. The female Catalan proponents are numerous here, after all.

Sealing the fate of the below thriller was White's passer as well. 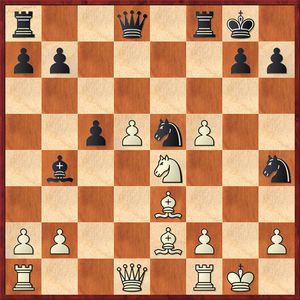 Alina Kashlinskaya shared the insights of her success over Aleksandra Goryachkina at a press conference with Sergey Shipov. Alina answered spectators’ questions, such as why she does not use her husband's surname, as well as sharing her uncertainty in assessing the diagram position afterwards. 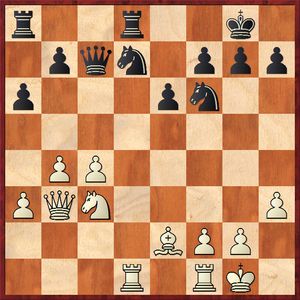 Kashlinskaya was seriously apprehensive of22...b6 or 22...Ne5 23.c5 Nc6, intending to mount the knight into the center. Meanwhile, Aleksandra rushed it with

A stubborn defense was not enough for Goryachkina to bail out.

The nowadays Superfinals are as long as 11 rounds. Valentina Gunina is known for her unyielding character even with 9 rounds and starting off to a pair of warm-up zeros, managing to bridge the starting gap in the end nonetheless. This said, we now have as many as 11 rounds...The fight is only about to start!