Fischer's Spirit in the City of Ufa

Even if not quite stellar, the 2021 Russian Superfinal has brought together an extremely combat-oriented lineup. Well, Ian Nepomniachtchi is busy preparing for the match with Magnus Carlsen. Alexander Grischuk, Sergey Karjakin, Daniil Dubov and Evgeny Tomashevsky are missing. However, the rest of grandees have shown up in the city of Ufa, such as the rating favorites Dmitry Andreikin, Nikita Vitiugov, Andrey Esipenko, Kirill Alekseenko, Vladimir Fedoseev and Alexandr Predke, as well as the qualifiers Pavel Ponkratov, Maksim Chigaev, Alexander Motylev, Aleksandr Rakhmanov, not to mention the tournament’s jewel Aleksandra Goryachkina. It is no wonder that Western journalists highlight that none other than Judit Polgar or Beth Harmon could be in Sasha's place! Undoubtedly, the female chess player’s performance is one this article's main points.

To lament the absence of heavyweight stars seems untimely. The world champions’ invariable participation in the USSR championships was not an axiom. And we have on board here two Candidate Tournament participants, the Carlsen's nemesis, a World Cup semi-finalist, and several winners of the Higher Leagues. Quite a number of people to keep an eye on and root for!

Such tight Superfinals are rarely known for high scoreability. Anyway, it would be hard to criticize a participant who has some immediate goals in mind: not to finish last with something like "minus two or three". That said, there is no lack in win/loss outcomes.

I already mentioned Goryachkina's being in the limelight, and she immediately proved that you simply cannot lower your guard when facing her over the board! 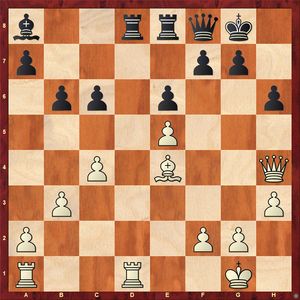 Black is forced to fight back with a bad bishop, and instead of a grim-looking 22...Re7 23.Rхd8 Qхd8 24.b4 the Russian team coach aims at keeping the game alive as far as possible.

To go for a pleasant ending after 24.Qхf6! gхf6 25.g4 (or even 25.c5!?) was a good solution, but Aleksandra prefers to keep the queens on the board to exploit the black king’s exposed situation.

Of course not 25.Bхa8?! Rхa8, solving all problems for Black.

27...Rхd8! is a better move. Now Motylev loses control over the only open file.

Now that White has chained her opponent to the defense of weaknesses 32.Bf5 Кf7 33.Bg4 looks good, but Aleksandra has a different plan in mind.

This is a last mistake. Instead, 34...Be8 should have been preferred. 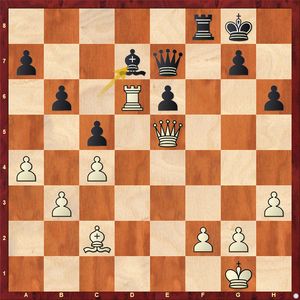 This decisive breakthrough shows the principle of two weaknesses in action. Black cannot defend his king and the queenside at the same time.

The famous coach had a difficult start as in addition to this loss he had also went down to Vladimir Fedoseev in Round one. 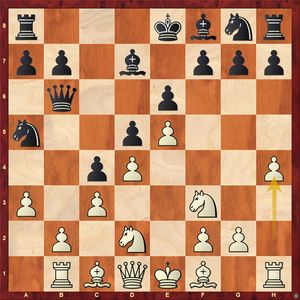 Fedoseev is Fedoseev, and he comes back with the most creative and combative response.

The position of the h6-knight has its downsides, this is why 10...f6 should have been taken into consideration.

The threat of 13.Bхh6 gхh6 is no longer in the air. As you have already seen from the above game with Gabrielian, the b3-pin is temporary, there is no immediate piling up on c3, and Black needs to be careful not to find himself on the business end of the attack. This is why castling short should have been avoided. 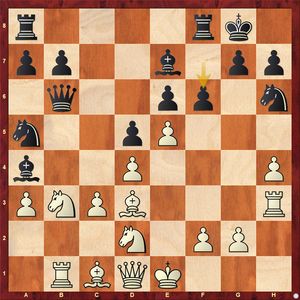 This move allows the French bishop to spring into action. 18.Rхb3 Qc7 is more precise. 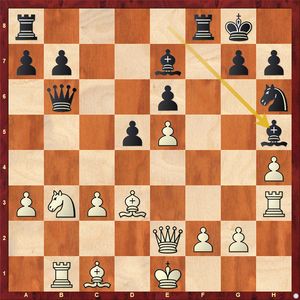 White has nothing to show for the missing exchange: 23.Nd4 Qg4.

26.Rf1 is best answered by 26…Rg7. Fedoseev gives up his queen for a couple of minor pieces, but it can no longer influence the game's final outcome.

An elegant finale — the king shepherds the march of his army.

An excellent and very interesting line, which for some reason has failed to bring laurels to the Esipenko-Motylev tandem (the h5-square proved a real letdown!). Has failed so far… 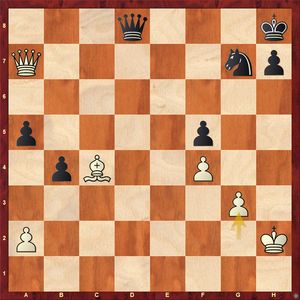 Meanwhile, going into round four Kirill Alekseenko is on clear first with two wins against Aleksandra Goryachkina and Alexandr Predke. 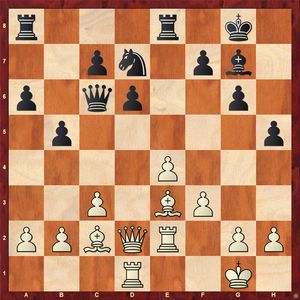 The bishops are very powerful, and Predke's king is exposed. Black should have urgently looked for queenside counterplay even at the cost of a pawn via 22...a5!?, intending b5-b4.

The exchange sacrifice 28...Re5 is best met by 29.Qg3! that highlights the benefits of White’s position.

After 31...Rf6 White immediately grabs the doomed pawn with 32.Qхh5. 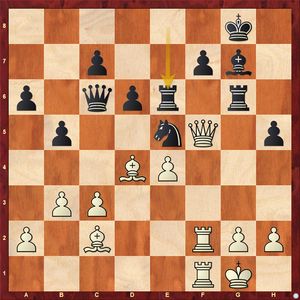 Black is down material, but pins his hopes on the centralized knight, which means that White still needs some precision to convert.

The transition to the opposite-colored ending was winning for White after 40.Bхe5 Bхe5 41.Bхf7 Bхc3 42.Qg4 Bg7 43.Bd5, but Alekseenko keeps his bishops in high esteem. 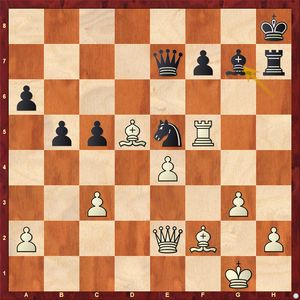 Grief comes from a different flank. 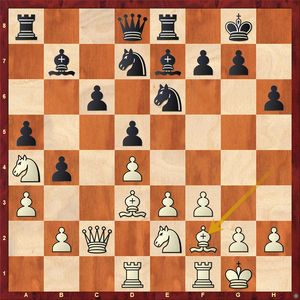 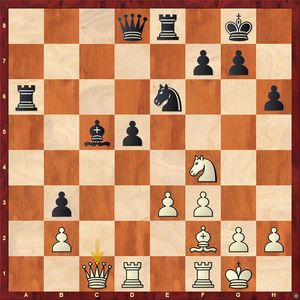 Black could have developed counterplay with 25...Bd6! 26.Nхd5 Qb8 27.f4 Rc8, intending to infiltrate into с2. The game has transited into the conversion phase, in which the heroic knight stops Black from creating counter threats. 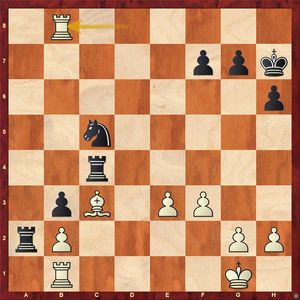 Or 35...h5 36.Bd4, and there is no getting at the bishop while the pinned knight cuts a very poor figure.

However, Round four turned everything upside down as the leader went down and his pursuers bridged the gap. 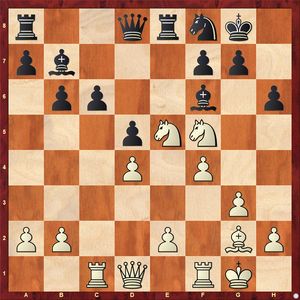 For some reason, Black allowed the well-known idea of Nd2-c4 in the opening with the d5 pawn pinned along the central diagonal and fell under a devastating attack.

The inevitable would have been only slightly delayed by 19...Rc8 20.Rfd1.

The extent to which Maxim Matlakov’s style has changed is amazing. Who could have predicted five years ago that Matlakov would one day start employing Velimirovich attack instead of g3-featuring lines? Alekseenko, Vitiugov and Goryachkina's bishops, and the Velimirovich's attack – it looks as if the spirit of the great Fischer visited in Ufa. 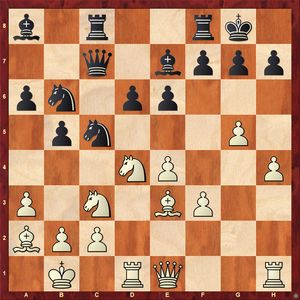 In fact, the game finale was much more prosaic.

There is no opening up the h-file: 21...gхh5 22.Rхh5. The text doesn’t stop Matlakov's decisive attack anyway. 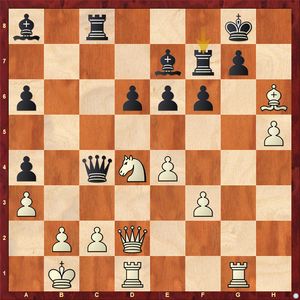 The black king needs to run away for fear of checkmate, allowing the white pawn to queen.

I don't want to sound like a broken record with the already hackneyed topic of filibuster, but Ponkratov's duel against Motylev indeed resembled a corsair's battle against a fearless pirate hunter's ship. Pavel's game with Alexander produced a genuine feeling of cannon balls rolling across the board! 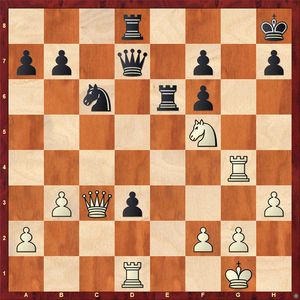 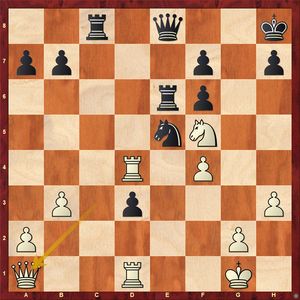 Black takes a decisive action! Black hits the white ship with all his heavy guns, and it collapses completely.

Those who have "fifty percent" can also display their ambitions at any time! Will Chief Arbiter Boris Postovsky need to referee the tie-breaker? How many players will make part of the tie-breaker after all? However, it's too early to think about it – see you in a few more rounds!