As the science city starts feeling the hot breath of the final round with prizes and qualification points at stake, the ladies have set to work with renewed vigor. It is renewed in the literal and figurative senses since the decisive ratio has increased from two to four games.

We wrapped up the previous report with a question if anyone was going to stop the world champion. Indeed, a mighty Chinese's score was perfect, and her performance that of a world champion. In round seven, she defeated the hero of the first few rounds. 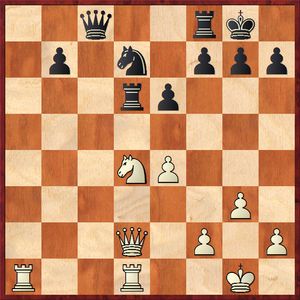 The pin along the d-file is dangerous, and care should be taken in advance to neutralize it with 30.Rd2.

The queen on c5 is misplaced as it is subject to b7-b6. In connection with this, 31.Qa7! was a nice idea to meet 31…b6? with 32.Nхe6! Pawns do not move backward, and the white king’s position is seriously compromised. Two weaknesses are usually enough for a win. 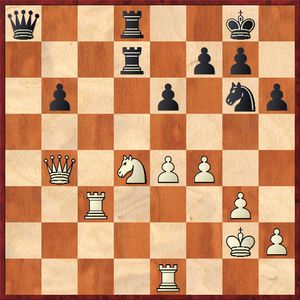 35.Nf3 would have allowed staying in the game, whereas the text leaves the king without defenders.

However, in the next round Gunina indirectly influenced the course of the tournament race. She was to meet Kateryna Lagno, who would face the Chinese player in the following round. Before that, Lagno alternated calm draws with high-class victories, but Gunina managed to annoy her national teammate seriously. 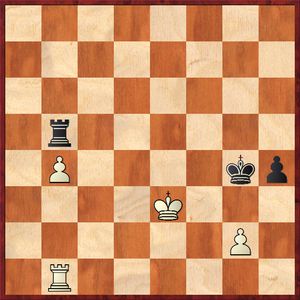 Now the white king is a step closer to the theater of action, which is of paramount importance.

It has brought to memory yet another standoff of the rook vs. the h-pawn, which happened in one of the decisive games of the Candidates tournament in Kazan. 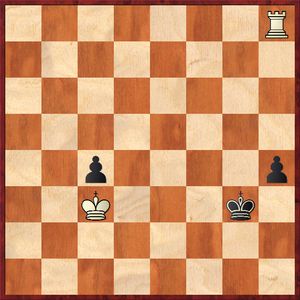 Although the knight is misplaced and White needs time to do away with the c-pawn, Black cannot profit from this delay.

62.Ke3 Ne5 63.Re4 Nc6 64.Re6, and Goryachkina's hunting down the knight was deft and confident. There is much in common between these two endings.

It was definitely something for Lagno to get angry about as a chess player! The followup of one of the strongest chess players in the world was a literal annihilation of the champion's defenses. 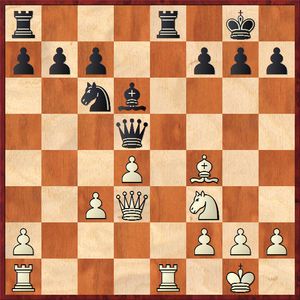 This stronger move was first employed in Iljiushenok – Iljin, 2018.

The Kazan GM opted for 16...Kg7, and the female world champion preferred to have the f6-square covered with the rook. 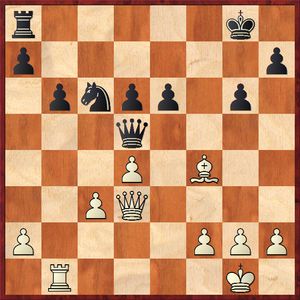 This subtle move is also part of the home prep as the queen does a double job of defending the f2-pawn and the rook.

It was Lagno's turn to delve into the position, and she found a subtle queen pendulum-like maneuverer to shake Black's defenses. 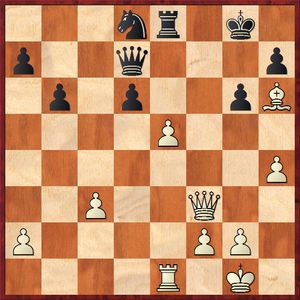 This move gives Black real problems. This square is best reserved for the knight. Therefore, 27...Qe6 was better, smoking the white bishop out with the following move. 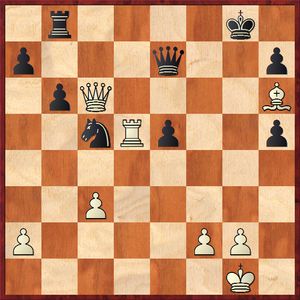 35.Qf6 Qf7 36.Rd8+ Black resigns. This is a brilliant victory, and, in my opinion, the best game of the tournament so far!

Having scored three wins in a row, this failure of the Chinese played into Humpy Koneru's hands as it enabled her to take over the lead. 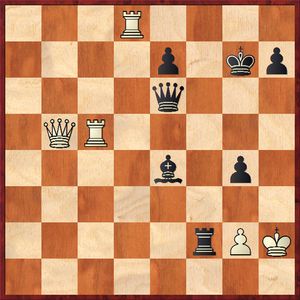 Paehtz – Koneru was the same line of the Petroff Defense as Lagno – Ju Wenjun with the only exception that Koneru opted for a different move order, actually favored by the Chinese national team players! 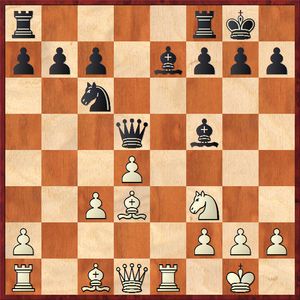 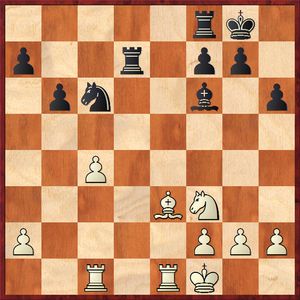 Black has solved her opening problems, and had Paehtz played 25.Red1 Rfd8 26.Rхd7 Rхd7 27.a4, followed by c4-с5, a draw would have been agreed soon after.

The c5-pawn proves a liability rather than an asset! It is soon that the black king approaches her, like a predatory spider to a butterfly caught in his web.

An important nuance: the bishop is threatening to land on b2.

Seeing a great number of games opened with the Petrov’s Defence at the tournament, the audience started jokingly wondering if it was all to honor the memory of the first national maestro Alexander Petrov? Indeed, the Western literature names the Russian game the Petroff Defense, and FIDE President Arkady Dvorkovich has recently sent a congratulatory message to Pskov to the compatriots of our celebrated maestro.

Having defeated Valentina Gunina, Humpy Koneru is now first with 7 of 9! The world champion is with 6.5, while Aleksandra Goryachkina and Kateryna Lagno have 6 and 5.5 points respectively. Goryachkina is obviously trying to avoid revealing her opening preparation and maximum potential. Her match with Ju Wenjun has already been announced to take place in January (half of it will be held in China and half in Vladivostok of Russia). There is a difficult battle ahead, which needs energy and fresh ideas, but Goryachkina converts his scoring opportunities without fail nonetheless. 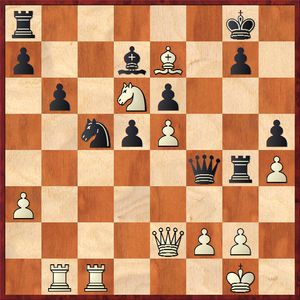 White has compensation for the missing pawn, and it is anybody’s game after 25.Bg5; however...

Despite such fatal blows, the ex-world champion has delivered a number of games that can serve as real examples for calculation training in complex positions. 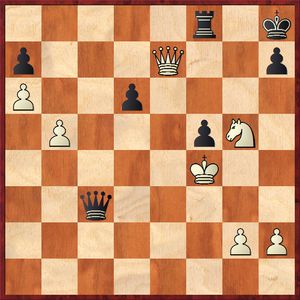 What a position! White is banking on her queenside pawns, active king and an attacking tandem of queen and knight, and after 48...Qe5+ 49.Qxe5+ dxe5+ 50.Kxe5 Rb8 51.Nf7+ Kg8 52.Nd6 there is nothing to fear. Kosteniuk tries to bypass it by proving that king’s active position has its cons as well. 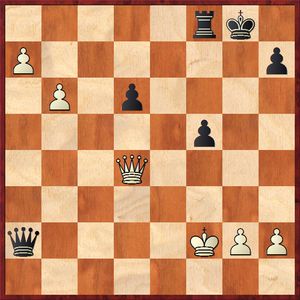 This is a decisive mistake. Instead, 55.Kg1 Qb1+ 56.Kf2 should have been preferred as Black is far from capable of dealing with powerful white passers.

However, Kashlinskaya managed to shine yet another time. 3.5 out of 9 is no reason for discouragement (you can always slam the door in the final round and finish with the fifty percent score), and I am confident that in the following tournaments of the series the European champion will perform way better. 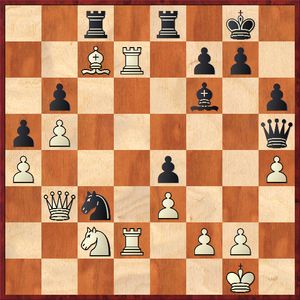 With two decisive rounds ahead, our interest is focused, first of all, on the face-to-face combat between the champion and the runner-up! Ekaterina Lagno, in turn, will attack Humpy Koneru as White, and the fate of the tournament will be decided in head-to-head fights of the leaders.