As Straightforward as It Gets

The Russian Championships Higher League among men and women is underway in the capital of the Chuvash Republic.

In the open section, a legendary filibuster Pavel Ponkratov has grabbed the lead. He has succeeded in his two white color games in a row against Alexandr Triapishko and Alexey Sarana. 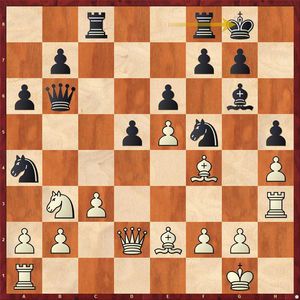 The diagram position has emerged out of the complex fashionable line of the Caro-Kann Defense.

Realizing the gravity of his position, Alexandr Triapishko gives up the exchange in keeping with the best traditions of Tigran Petrosian.

Black attempts to take control of the 4th rank and creates the threat of ...Nхb2 at the same time.

Having completely outplayed his opponent, the native of Crimea starts to lose the thread of the game. 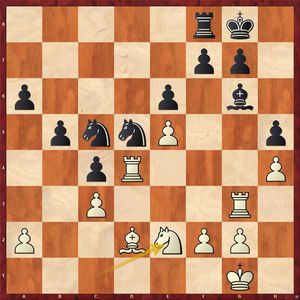 27...a5 looks interesting to create the remote passed pawn on the queenside.

White’s intent to take the h5-pawn needs no explanations.

This is the beginning of a faulty plan. 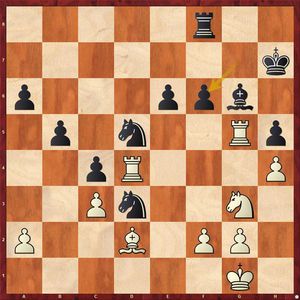 It is this move that Triapishko must have overlooked. Now Ponkratov’s pieces come alive again.

Black's position is difficult already, but here follows a blunder.

There is no avoiding the loss of a minor piece.

This is a rare and not very successful continuation. 8...Be6 is the mainline theory. 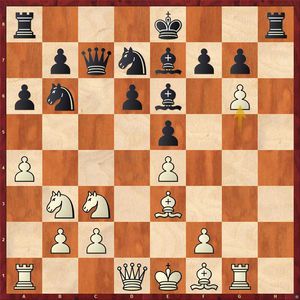 Playing with the edge tools. There is nothing wrong for Black after 15...fxg6 16.Rxg6 Bf6.

This is not bad, but 17.Nd2 is even stronger to cover the с4-square.

The engine shows the reckless 19...g5, which defies a human being.

This natural-looking move lets the lion’s share of advantage go. The energetic 21.Nd5 Bxd5 22.Qg6+ Kf8 23.exd5 Nxd5 was worth studying as the white rook joins the fray via the cute maneuver 24.Ra3 to give Black massive problems.

Stopping any breakthroughs via the g-file once and for all.

Sarana has improved his position substantially, and now it takes drastic measures to keep up the tension. 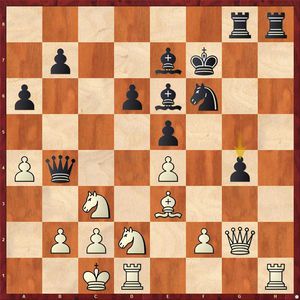 This is a blunder seemingly caused by some miscalculation. The strongest 23...exf4 24.Bxf4 Rh3 Triapishko would have maintained all pluses of his position.

This double attack of e3 and f5 gives Ponkratov a huge edge.

The pack of pursuers includes six participants: Maksim Chigaev, Mikhail Antipov, Alexander Motylev, Mikhail Kobalia, Artyom Timofeev, Evgeny Alekseev. They have 2.5 out of 3. Chigaev — Ponkratov is something to look forward to.

It is absolutely impossible to disregard Maxim Chigaev’s brilliant victory over Ilia Iljiushenok. The game is of considerable theoretical interest, and the final offensive is reminiscent of Mikhail Tal’s masterpieces!

A clever idea: in some lines White is ready to push b4 himself, dislodging the knight from c5 and preventing the queenside play. Therefore, Iljiushenok strikes first.

This is an excellent idea to block the b–file prior to launching the offensive.

This is an obvious inaccuracy. However, it is a real challenge to spot the computer move 17...Ncd7. Meanwhile, White has no problems here as well. 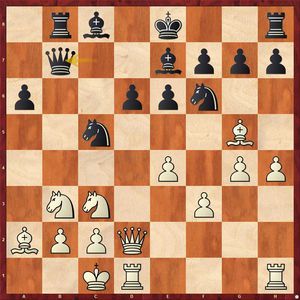 This is as straightforward as it can be. It is worth testing 18.Bf4 to provoke weakening of the d5-square after ...е5.

Good advice is beyond price for Black now. Meanwhile, the engine is not discouraged and insists on 19...Qb6 20.g5 fxg5 21.hxg5 Rf8, claiming that White’s edge is not that substantial. Is it not something crazy to find over the board?

This is not precise from Stockfish's point of view, but Black's defense is incredibly tough anyway. 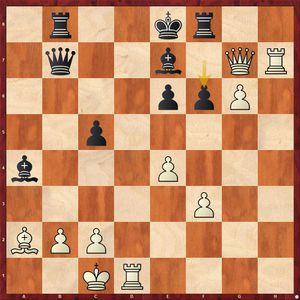 Black is defenseless against the checkmate. I am sure this vivid attack will not go unnoticed!

Last year's Russian women’s vice-champion Polina Shuvalova does not lose her nerve in a tough men's competition. She outperformed as Black one of the tournament rating favorites Alexander Rakhmanov in a difficult fight.

This is a modern treatment of the opening in which White is willing to break through the g-file.

The energetic 15...b5 deserved attention as Black is trying to create counterplay without stopping at pawn sacrifices. 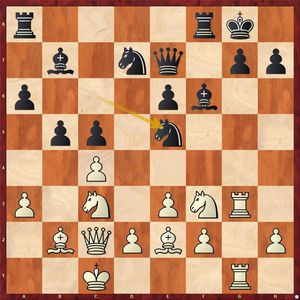 Rakhmanov's offensive was superb up to around this moment when he started going astray.

Black's position looks precarious, but Polina managed to come up with the strongest defense:

Now the g-line is plugged. 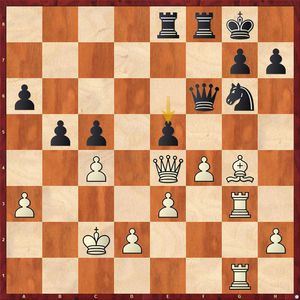 White’s next move is a significant mistake.

Needless to say, it is not so easy to spot and correctly assess the consequences of 25.f5. However, it was here that one should look for success: 25...Ne7 26.Bh5 Nxf5 27.Rf3 g6 28.Bg4, and, thanks to the pin along the f-file, White can restore the material balance and retain all the pluses of his situation.

This is an interesting exchange sacrifice, but Shuvalova is on the alert. 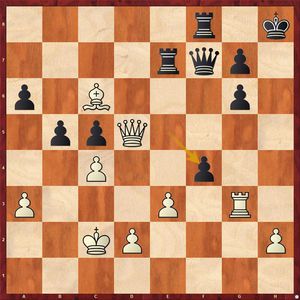 A decisive mistake. Only 30.Qxf7 Rexf7 31.Rh3+ Kg8 32.exf4 would have allowed staying in the game because the threat of Bd5 maintains tension in the position.

It does not take long to finish White.

It is also worth noting an extremely exciting tactical faceoff between Artyom Galaktionov and Tamerlan Chyndygyr. 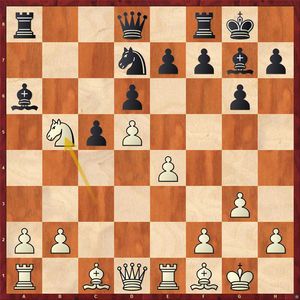 A creative treatment of the opening shaped into the position resembling the Benko Gambit with fianchetto.

Black lashes out, although 15...Ne5 looks more cautious, as was seen in the game Sobek - Wotava.

An excellent attempt to muddy the waters.

Too timid. It was necessary to pick up the gauntlet with 22.dxe6 d5 23.g4, and Black will find it hard to prove sufficient compensation for two sacrificed pawns.

White plays all over the board, not at all expecting his opponent to come up with any defense.

White's position is still for choice after the more simple 23.Bxf4 Bxb2 24.Ra2. 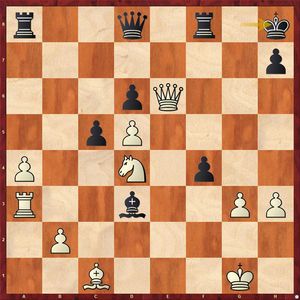 Even if Black's position looks scary, there is still no clear way to achieve the edge for White here.

Marina Guseva is in the lead in the women’s section and with the unblemished score at that. She managed to crush her opponent Elizaveta Solozhenkina in a spectacular mini-game in round two. 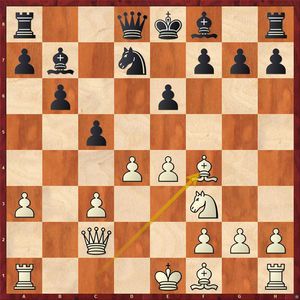 Solozhenkina commits a serious mistake in this well-known theoretical position.

Correct is 10...cxd4 11.cxd4 Rc8, but I am sure Marina was well prepared for this position in which Black has many problems to solve after 12.Qb3.

An excellent decision from White! White sacrifices the pawn to open up the game to her advantage.

This decisive error allows a cute combination. Only 13...b5 14.a4 a6 was good enough to stay in the game, although 15.g3 highlights Black’s being in bad shape as well.

The black queen is suddenly short of squares to retreat due to the fork, while 15...Bxe4 runs into the intermediate  16.Qd1+

Surely 16.Qxe4 Qxc3+ should be avoided as allowing Black to survive.

In round three Guseva fended off an interesting-looking but ill-prepared offensive by Dina Belenkaya.

White goes all out. They usually prefer 5.Nc3 here.

This is yet another creative decision. 6.Bb5 would be a usual choice, although Black is completely OK in the complications arising after 6...Qa5+ 7.Nc3 Qxb5 8.Nxb5 Nxd4.

The more straightforward 10.Be3 Qc7 11.Nc3 is worth attention.

This is an inaccuracy. 11.Rd1 is stronger as it gives Black a hard time in terms of development completion; for example, 11...e6 12.Be3 Qc7 13.Nc4 with a huge compensation. 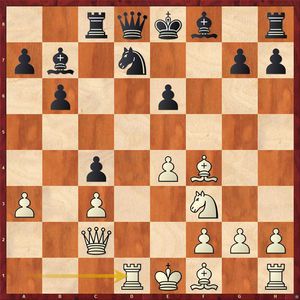 This is one more inaccuracy that hands the initiative over to Black.

Later Guseva managed to complete development, consolidate her position and convert her extra pawn into a victory.

Going into round four, there are as many as 6 players trailing half a point behind the leader: Anastasia Bodnaruk, Leya Garifullina, Alexandra Zherebtsova, Alina Bivol, Anastasiya Protopopova and the reigning Moscow champion Daria Charochkina. Guseva – Bodnaruk will be the pivotal game of round four.

In this exciting tournament, the participants delight us with combative and creative performance. The following review will show us the developments as we cross the tournament midline!