Even if six months later, the Russian team championships have kicked off anyway and in its usual venue at that – the Sochi Grand Hotel Zhemchuzhina. This time, there are ten teams in the men's and 13 in the women's section of the Premier League; there is no crowded second division, no children, and no veterans, but this is clearly better than nothing. November is a poor substitute for May, but every three days the Black Sea spoils us with warm and sunny weather (and the water in the pool is +28 all year round). Players have missed the atmosphere of "live" chess, and it's nice to see virtually no easy games. We offer you some bright snippets of drama-filled struggle. 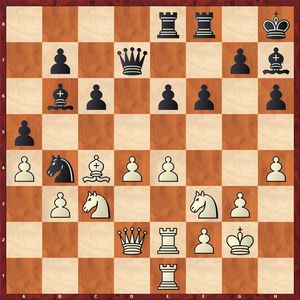 Vladimir Fedoseev treated the Catalan opening in a peculiar way by rerouting the light-squared bishop to h7 via d7-c6-d5-e4, and the dark-squared bishop to b6 via e7-f6-d8. White's hesitation allowed his opponent to realize his plan in full. Now, in the case of a calm 27.Rd1 Qf7!? 28.Qb2 Qh5, Black is gradually increasing the pressure, so David Paravyan decided to provoke a crisis. However, he seems to have underestimated Black's rejoinder. 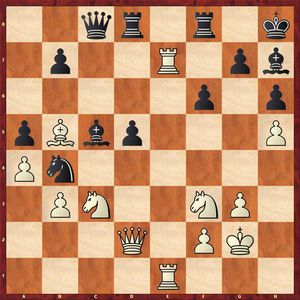 White needs to sound the retreat. White was already playing on the incremented time, and he made this move with only two seconds on his clock. However, no tricks work for White: 32.Rxg7 Kxg7 33.Nd4 Bxd4 34.Re7+ Rf7. 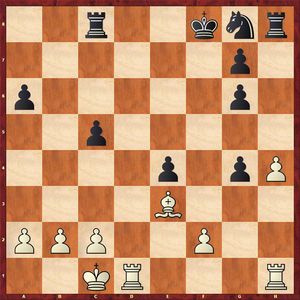 In the Caro-Kann Defense, Nikita Vitiugov outplayed his less experienced opponent and got a dream endgame: black lags behind in development, and his pawns are compromised. However, the Crimean player begins to come up with some tricky practical chances.

It may seem that after White's answer, the rook is trapped, but this is not the case.

This is the point of Black's defence.

In the case of 28...Kg8 29. a4, the passed queenside pawns should decide the battle outcome. Olexandr Triapishko banks on the active piece play.

Of course, you want to win "with all conveniences", but now Black gets the opportunity to initiate complications on the kingside. The immediate 29. a4 seems stronger here, after which 29...g3 30.fxg3 Rg4 31.Bf2 Nh5 does not work out due to 32.Ra6+.

31.Rxg4 Nxg4 leaves the e3-bishop and the f2-pawn en prise and is bad for that reason.

Black probably did not feel like playing 32...c4 because of 33. Bd4 Rf8 34.a4, although he seems to hold this position after all. Nevertheless, Triapishko has a different plan — he is ready to give up yet another pawn just to reroute the knight to the aid of his own passed pawn. 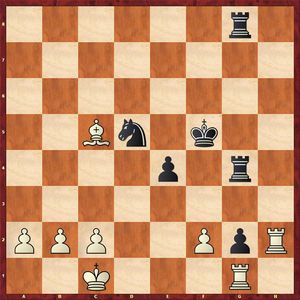 The king arrives just on time. White wins back the rook at the cost of both connected passers. 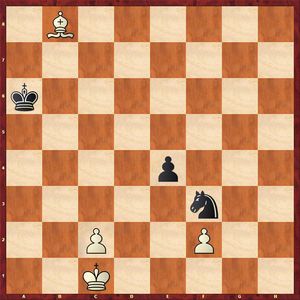 Black holds this position without much effort. He just needs to post his knight on f5 (to keep the white king away from his pawn), and keep the king near the c6-square. 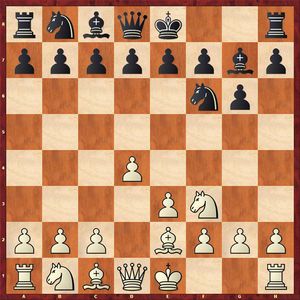 In such cases, they usually say that his move promises a long fight to come. At the same time, White achieved a decisive advantage only 15 moves later without his opponent making any apparent mistakes. Let's try to figure out how Vlad managed to "pull it off."

5...d5 is a more principled move not to let the с1-bishop out. Black probably didn't want to invite any complications after 6.dxc5, so he opted for a simple move.

7...d6 is perhaps more flexible, but this is a matter of taste. Black's next moves are again simple and without guile. 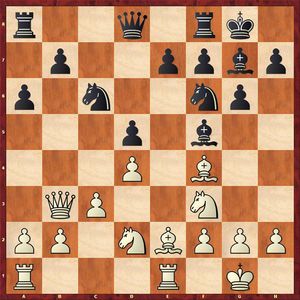 Black seems to have realized that further play based on general considerations would amount to no good (12...Ne4 or 12...Rc8 runs into the unpleasant 13.Nb3! Nxb3 14. axb3, building up the pressure), so he tried to solve the problems tactically.

Vladislav is not put off by any simplifications at all. 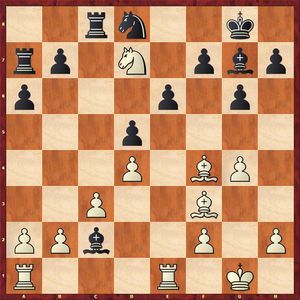 Daniil Yuffa has completely outplayed his young opponent but rushed things at the critical moment. 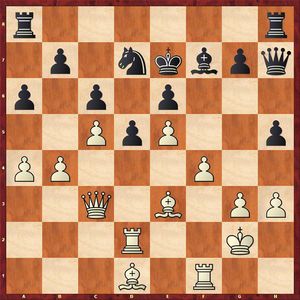 This breakthrough suggests itself, but it all turns out surprising well for Black. White should have started with 29. Bc2. Now 29...g6, of course, does not lose immediately, but all reasonable moves run out for Black soon, and White can safely go about consolidating his position to the desired condition. 29…Bg6 is a more principled move, but then 30.f5! Bxf5 31.Bg5+ Kf8 (31…Ke8 changes nothing) 32.Bxf5 exf5 33.e6 Qg6 34.Qe3, etc. 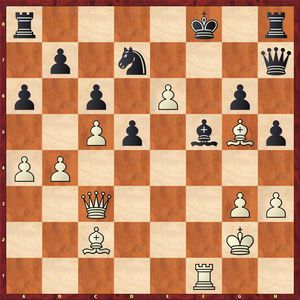 
This game turned into a real gem of round three. 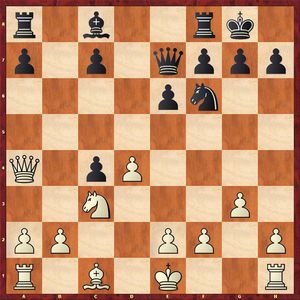 Instead of the theoretical mainline 11...c5, Daniil opts for a rare gambit continuation, which, however, has also been tested in the grandmaster practice.

Each opponent is true to what they are fond of: Dubov tries to develop the initiative for the material sacrificed, and Goryachkina attempts to consolidate the position. The text does not seem to have ever been tested at a high level before: Malakhov vs. Bacrot (Zagreb 2018) and Oparin vs. Bumanna (Skopje 2019) saw 15.Rc1. Anyway, we dare assume that this is not Alexandra's home preparation, but an improvisation. 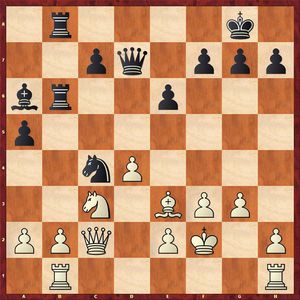 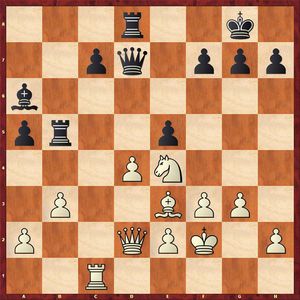 This strong "intermezzo" must have dropped out of White's radar. He was most likely anticipating 27...Qxd2 28. Bxd2 Rxe5 29.Bf4 with a comfortable position. 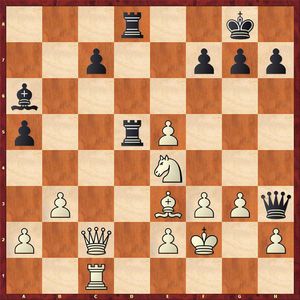 In the women's championship, the vital match between the reigning champion KMAO-Ugra vs. St. Petersburg ended in a 2:2 draw in round three.

A somewhat overcomplicated plan: White spends much time to force the trade of knights at the cost of her queenside development. 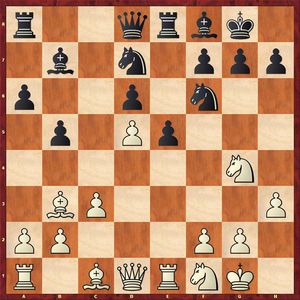 It is unclear whether Black really needs that dark-squared bishops' exchange. This maneuver is time-consumming, in the first place.

It seems to be a decisive mistake already. 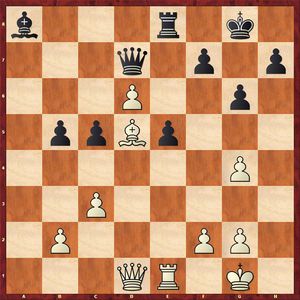 Black has failed to blunt the white bishop with the timely c5-c4, and now there is no compensation for the powerful d6-passer. 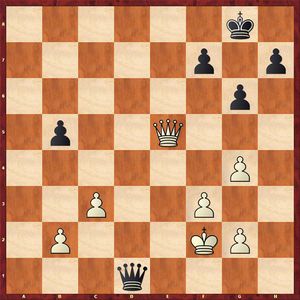 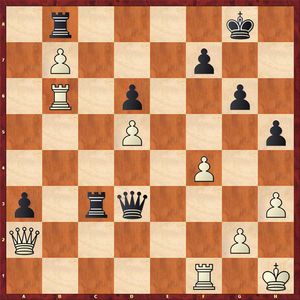 Black's initiative looks quite formidable, but White also has a strong trump card – the b7-pawn. 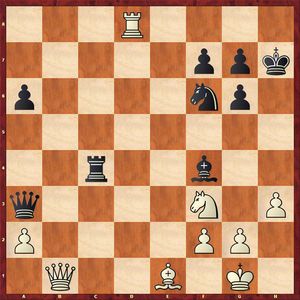 This part of the game was in sharp mutual time trouble, so we will not delve into any lines. Note only that Black's last move loses, and the balance was maintained by 38...Re4! 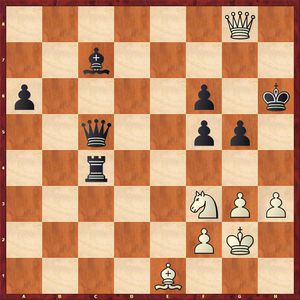