He defeated Teimour Radjabov in blitz. 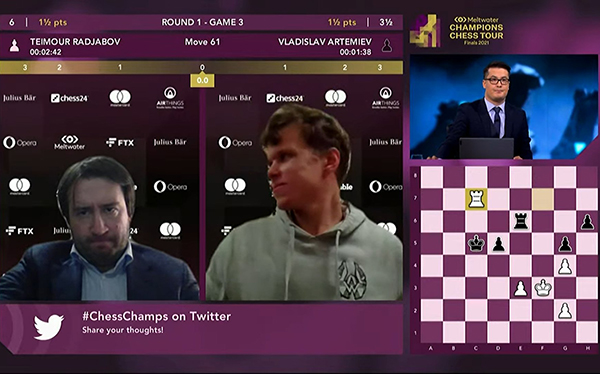 The 2021 Meltwater Champions Chess Tour Finals started on the 25th of September. The event is a round-robin tournament played over 9 rounds. In every round, players play a match against their opponent. Each match consists of 4 rapid games. In case the result after these games is 2-2, a 2-game blitz tie-break will be played, followed by an Armageddon game in case of 1-1. Players earn 3 points for a match win in the rapid games (the loser earns 0 points). A match win after tie-breaks earns the winner 2 points (1 point for the loser).

In the initial ranking of participants, ‘bonus’ points are awarded to all players according to the current Tour Standings, reflecting their competitive success so far in the Tour.

The shortest match was Magnus Carlsen vs Jan-Krzysztof Duda. The world champion got the upper hand in the first two rapid games, and the third one ended in a draw. Thus, the Norwegian won the match 2.5-0.5 (3-0).

Wesley So defeated Shakhriyar Mamedyarov in the second and fourth rapid games, whilst the first and fourth encounters were drawn. The score is 3-1 (3-0) in favour of the American grandmaster.

The winners of the other three matches were determined in additional matches.

Vladislav Artemiev and Teimour Radjabov made four draws in rapid. The Russian beat his opponent in the first blitz game and drew the second. Respectively, Artemiev won the match 3.5-2.5 (2-1).

Anish Giri and Hikaru Nakamura traded blows in rapid and made two draws. The Dutch grandmaster was stronger in blitz, having won the second game. The score is 3.5-2.5 (2-1) in favour of Giri.

Levon Aronian and Maxime Vachier-Lagrave made it to the Armageddon. The "sudden death" game was won by the Frenchman, who had the black pieces.