Vladimir Kramnik: Ilyumzhinov Did So Much For Chess

The 14th World Champion gave an interview for the Sport-Express. 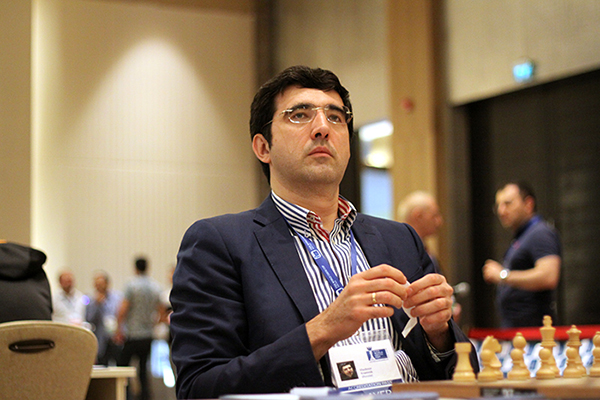 Vladimir Kramnik
The Kortchnoi Zurich Chess Challenge starts on April 12 in Zurich, Switzerland. One of the most important chess events of the year will bear the name of Viktor Korchnoi from now on. Apart from the traditional battle of supergrandmasters, there will be an open tournament for more than 200 participants. The 14th World Champion Vladimir Kramnnik will also take part in the festival. However, his Sport-Express interview with Kirill Zangalis began with another issue.

Q: Nobody seems to fully understand what is going on within FIDE. What is your view on the situation?

A: Natually, I am by no means indifferent to the situation. I have no idea who is behind it and what is the coupists' goal, but here is what I think about it. First of all, I see no reason for replacing the FIDE President. Chess keeps progressing and developing. There are no problems or incidents, FIDE organizes all events in its calendar timely and methodically. Secondly, those who seek the replacement of the man in charge have no legal grounds for doing it. The next elections will take place in about a year. All the talks of how hard it is to seek sponsors are vague and not supported by facts. All in all, there are no objective reasons for replacing the president.

A: It looks like a planned operation, disrespectful to the statue of the organization. It is also disrespectful to Ilyumzhinov, who did so much for chess, and has become a target now. It is bad for credibility of FIDE as well. I hope the coup will fail. The conspirers have nothing behind them – neither law, nor money or authority. So, my own position is very clear: one must wait until the elections of 2018 and respect the statue of FIDE. Anyone who wants to become a new FIDE President must present a program and go to the elections.

Q: And what if the Presidential Board will gather in Athens on April 10 without Kirsan Nikolaevich and vote for his resignation?

A: This will be stupid to say the least. One will have to go to court, which will inevitably confirm the rightness of Ilyumzhinov. The world of chess will not accept such coup. However, I hope these people still have some common sense in them and will not go that far, otherwise they will suffer from very serious consequences. Their career in chess politics will be over for sure.

Q: Perhaps Ilyumzhinov was too soft with them? Don't you think FIDE needs new faces, younger and more energetic?

A: Some changes are needed for sure. On many occasions I criticized certain members of Ilyumzhinov's team. These people, let us not mention their names, do almost nothing for chess, and do not even do the work required from them. So I agree that the changes are needed. However, the thing is that all these people were also elected legally. If one obeys the law, one has to play by the book. However, if they are breaking the law, they must be replaced. Once again, I am not talking about the entire team, as some of its members are working hard, but there is surely a demand for new faces with interesting ideas.

Q: During his more than 20-year reign in FIDE, Ilyumzhinov unified the chess world, the championship cycle became stable and easy to understand, and the number of tournaments increased by several times. Should Kirsan Ilyumzhinov be praised for that?

A: Chess lived through hard times in 1995, when Ilyumzhinov came to FIDE. Objectively, our current situation is just excellent compared to that time. Many of leading grandmasters will confirm my view. We have a great number of tournaments, the championship cycle is transparent and easy to understand. People starting to get used to a biennial World Championship Match in November, and Candidates Tournaments in March. For football, hockey, and many other sports such stability is normal, but for chess it is a great leap forward. In the 90s everything was just chaotic.

Q: Oleg Skvortsov suggested an idea to move FIDE Headquarters from Athens to Zurich. All major sports organizations are based in Switzerland. How do you like this idea?

A: I support it very ardently. Zurich is a city with rich chess tradition, unlike Athens. The world's oldest chess club is located in Zurich – it is more than 200 years old, and I often hold lectures in it. Oleg Skvortsov, who is a friend of mine, organizes a big tournament in Zurich for sixth straight year, and is a honored member of the aforementioned club. Also, Switzerland is ideally suited for the base of FIDE Headquarters. The country has always been perfectly neutral, and the fact that it hosts the IOC Headquarters speaks for itself. In the past FIDE was also based in Switzerland – in Lucerne and Lausanne. Perhaps one could start changes in FIDE with that.

Q: You haven't played in any official tournaments this year. Why so?

A: Early this year I took a break to have some rest, and then there were simply no top-level events. This makes playing in Zurich even more exciting. The organizer of the festival Oleg Skvortsov does a great job. This year, in addition to the supertournament, there will be a strong open with a number of famous grandmasters, such as Alexei Shirov, Loek van Wely, Eltaj Safarli, Alexander Motylev, and so on. I am glad that Oleg supports chess with such enthusiasm. He loves chess passionately and, for your information, plays very well himself. He plans for a friendly game with Vishy Anand prior to the opening ceremony, and this game will be relayed live.