First round pairings were determined. 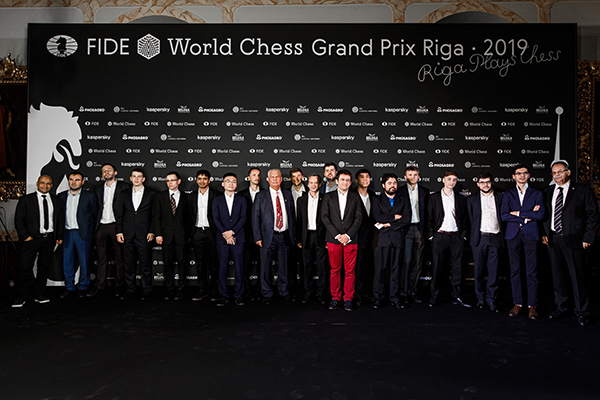 The Opening Ceremony of the second leg of the FIDE Grand Prix Series 2019 organized by World Chess took place in the House of Blackheads in the evening of July 11.

The tournament is a knock-out event with 16 players. There will be four rounds.

FIDE President Arkady Dvorkovich, CEO of World Chess Ilya Merenzon, as well as General Manager at Kaspersky in Baltics Andis Šteinmanis gave speeches during the official part of the ceremony. Chief Arbiter Takis Nikolopoulos then proceeded to the drawing of lots. Players with the highest ratings — Anish Giri (NED), Maxime Vachier-Lagrave (FRA), Alexander Grischuk (RUS) and Shakhryiar Mamedyarov (AZE) — were assigned starting numbers 1, 16, 9 and 8 respectively. The draw of the remaining numbers and of the colours was made in front of the audience.

The rivals will play two games with a classical time control. In case of a tie, after a drawing of lots, the tie-break will be played.

The 2019 FIDE Grand Prix Series consists of four events featuring 21 players (plus one nominee from Israel). Two finalists will qualify for the Candidates Tournament.