Return Games of Round One Played at FIDE World Cup

19 matches of the open tournament and 9 women's matches go into a tie-break. 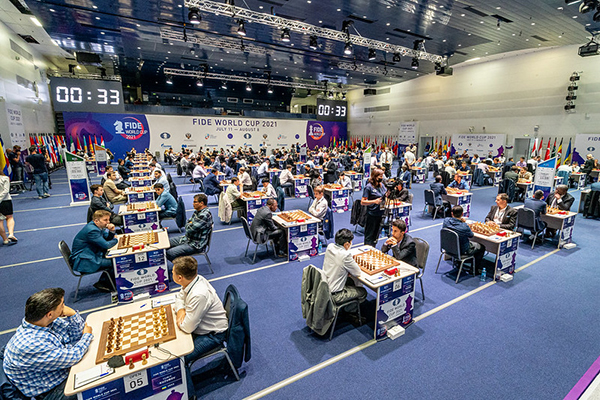 Return games of round one of FIDE World Cup finish July 13 at the Galaxy Entertainment and Leisure Complex of Krasnaya Polyana. The chess players who won their matches have advanced to the second round (scheduled on Thursday, July 15) to join players with the highest ratings: 50 in the open and 25 in the women’s tournaments respectively. And those who drew their matches will play a tie-break on Wednesday, July 14.

There happened no big upsets as the majority of rating favorites have won their matches. Ex-world champion Anna Ushenina, Vadim Zvjaginsev, Pauline Guichard managed to bounce back after day one. We can also highlight the score levelling victories of Sabrina Latreche over Natalia Buksa and Basheer Al Qudaimi over Amin Tabatabaei.

Wednesday, July 14, will see a tie-break in 19 matches of the Open and 9 matches of the women's tournaments. Immediately after completion of the second "classical" game a new drawing of lots was carried out for the tiebreaker matches (for each matchup separately).

Tie-break pairings (colours given for game one):