Return games of Round Four Played at the FIDE World Cup 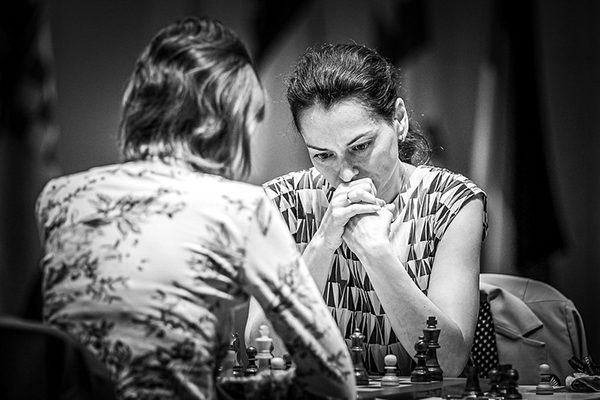 July 23, the FIDE World Open and Women’s Cups in Sochi saw the return games of round four (1/16 and 1/8 finals, respectively) took place. Also, some players may obtain the right to play in the next Grand Prix series, as long as they reach the quarter-finals. With regard to the Women’s Cup an added benefit for reaching semi-finals is the direct qualification to the future Women Grand Prix Series, the final dates of which will be decided very soon.

Playing the Sicilian as White against Radoslaw Wojtaszek of Poland in the open tournament, world champion Magnus Carlsen (Norway) acted extremely aggressively by exposing his king by pushing pawns and mounting a very potent attack. However, the Norwegian GM faltered one move away from getting a decisive advantage by overlooking his opponent’s witty rejoinder. The situation escalated sharply and, pressed for time, the champion made up his mind not to tempt the fate and sealed a draw with a perpetual check. The match score has turned 1:1 to send the battle into a tie-breaker of tomorrow.

Haik Martirosyan (Armenia) outplayed Ante Brkic (Croatia) with a score of 1.5: 0.5, and Samuel Shankland (USA) outplayed the last round hero Rinat Jumabayev (Kazakhstan). Let us recall that Rinat knocked out one of the principal Cup favorites Fabiano Caruana. Indian GM Pentala Harikrishna attempted to convert the minimum edge against M. Amin Tabatabaei (Iran) for over 100 moves, but failed to break his opponent’s stubborn resistance. Thanks to his success in game one, the Iranian GM won the match 1.5:0.5 and advanced to the next round.

Russian Pavel Ponkratov outplayed Etienne Bacrot (France) and equalized the match score in what happened to be yet another mind-boggling battle. Also winning on demand as Black over Vasif Durarbayli (Azerbaijan) was a young Uzbek GM Nodirbek Abdusattorov. All these players have shifted their games into tie-breaks.

Former world champion Tan Zhongyi (China) was White against the Sarasadat Khademalsharieh of Iran. The Chinese achieved an edge via a petite tactical operation, which she managed to convert in the struggle to come and win the match 1.5:0.5.

The duel of other ex-world champions ended in the same score: Alexandra Kosteniuk (Russia) launched a spectacular attack as Black against the Ukrainian Mariya Muzychuk’s king to advance into the next World Cup edition. Anna Muzychuk (Ukraine), Maria's elder sister, won the game and the match against Elisabeth Paehtz of Germany. Valentina Gunina (Russia) also won her second game and the match over Nino Batsiashvili (Georgia).

The Russian Alexandra Goryachkina defeated ex-world champion Antoaneta Stefanova (Bulgaria) as White and equalized the match score. The Georgian GM Nana Dzagnidze also managed to fight back after her young Russian opponent Polina Shuvalova misplayed the opening as Black and fell victim to a devastating attack.

The tie-break is scheduled on Saturday, July 24.