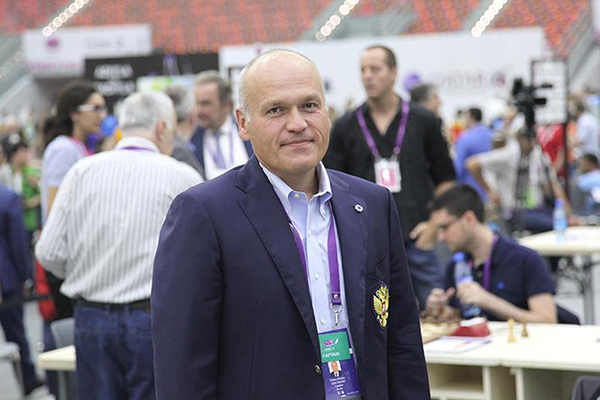 CFR President Andrey Filatov: "The question of the best way to organize the World Chess Olympiad in 2020 is being constantly discussed between FIDE, Organizing Committee headed by Deputy Prime Minister of Russia Olga Golodets, Chess Federation of Russia, and the Ugra Chess Federation. There are several variants in work. The most ambitious and preferable variant is the one in which the Olympiad will get the opportunity to expand its geography. If in this case, the Olympiad will have two host cities, two capitals - Khanty-Mansiysk and Moscow.

This decision is mostly subject to two factors: firstly, the Olympiad will be enlarged by the first-ever Chess Para-Olympics, the number of participants is increasing each year, and all the technical issues should be considered. Secondly, there were many demands to the CFR from chess amateurs from Russia and other countries, who want to see this biggest chess event with their own eyes. The number of such demands was sufficiently increased after the FIFA World Cup, greatly organized in Moscow. We take into consideration all the demands and we want to make the World Chess Olympiad as large-scale and available as possible, a real festival for all chess amateurs.

It is important to note that Khanty-Mansiysk will remain one of the cities which will host a sufficient part of the Olympiad. Ugra organized the Tournament of Nations in 2010 and held almost all major chess events including the World Cup this year. That's why it is not right to say that the Olympiad changes the host city. Khanty-Mansiysk will hold at least two important events, but the details will be announced later".

President of the Ugra Chess Federation Vasily Filipenko: "Our region does like and is able to host chess tournaments including the top ones. Taking into consideration our partnership relations with CFR and FIDE and the growing popularity of chess in the whole world, we are happy to be one of the host cities of the Olympiad 2020. Preparations are being made, and we are in constant contact with our partners".