Round 10 was played in Yekaterinburg. 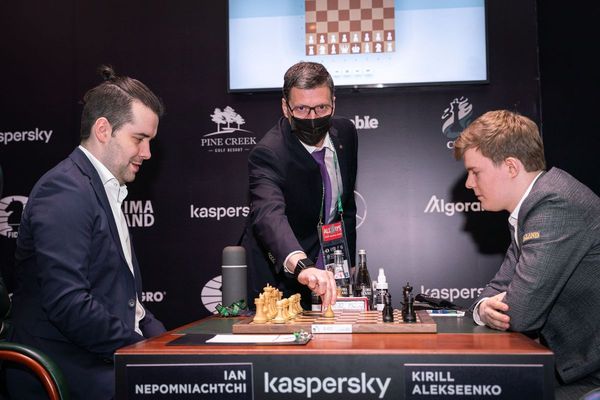 The Russian Ian Nepomniachtchi increased his lead at the 2020 Candidates to a whole point after defeating his compatriot Kirill Alekseenko. It turned out, Nepomniachtchi made the right choice of opening since Alekseenko was not too deeply familiar with the details of the position which arose. Black's 8th move was already unfortunate, and White developed a strong initiative with the most natural moves. Before the rest day, Nepomniachtchi has 6,5 points after 10 rounds and 4 rounds to go he is a very strong favorite to win the tournament and become the challenger in the World Championship Match. "He's someone who can outplay me... it's always been an interesting clash of styles!" said Magnus Carlsen on Ian Nepomniachtchi today.

The rest of the fights ended in a draw, after which the gap between the leader and the runner-ups has increased. Maxime Vachier-Lagrave, Fabiano Caruana and Anish Giri are behind the Russian with 5,5 points out of 10.

Among the draws, we can note the incredibly sharp duel Wang Hao - Grischuk, where at first Black thought about one of the opening moves for 72 (!) minutes, and then White sacrificed the queen for two minor pieces.

The move 1.c4 was played for the first time in the second stage of the Candidates Tournament, but this could hardly come as a big surprise for Alekseenko, since this is one of Nepomniachtchi's favorite moves, along with 1.е4. Soon, one of the lines of the English opening appeared on the board, which is informally called "semi-Catalan". White fianchettoed his king's bishop, but his d-pawn remained in its original position, keeping the opportunity to move to d4 and d3.

As Kirill admitted, he did not remember very well that line, made a serious inaccuracy already on the 8th move, and later on, he played not his best way. “It's quite a common mistake that you prepare all the main lines and you kind of spend less time looking at some sidelines and tricky move orders. So 1. c4 Nf6 2. g3 is not exactly what worries you most." – expressed his opinion English commentator Daniil Dubov about Nepomiachtchi-Alekseenko.

Ian confirmed that instead of 8… Be7, Black had to choose 8… Qc7 with the idea of placing the pawn on b6 and bringing the bishop to b7, since Black's main task is to develop his queenside in this position.

Ian Nepomniachtchi: "It was optically very easy, but in fact, I think it was not. I guess I was lucky that in the opening Kirill quickly got into some position he's not familiar with."

Taking advantage of the opponent's inaccuracy, White played d2-d4 and got a very good version of the Catalan opening. Ian developed his pieces and at the same time increased the pressure on the black's queenside. To complete the development, Black agreed to exchange his c8-bishop for his opponent's knight, but at the same time seriously weakened the white squares in his camp. Alekseenko tried to "twist" the position a little, but Nepomniachtchi acted very precisely and eventually won the game.

Ian Nepomnaichtchi: "The point is that everyone has like seven finals here. Seven finals in a row, that's my take on this. It's better to have +3 than +1 or something, but it's too early to make any conclusions."

For the second time in three days, Anish had to defend in the Sveshnikov Sicilian Defense. Maxim opted for the popular 7.Nd5 plan, which was tested, in particular, in the last world championship match between Fabiano Caruana and Magnus Carlsen (London 2018). After the exchange on d5, the world champion chose to play with his knight on e7, which leads to double-edged positions. Giri, on the other hand, opted for a calmer move 8… Nb8.

Of course, the French grandmaster did not come to the game empty-handed: he immediately made a breakthrough c2-c4-c5, which was considered safe for Black 5 years ago. Anish Giri could not recall his analysis in detail and, as a result, faced certain difficulties. By sacrificing a pawn, Anish blocked the opponent's dangerous passed pawn and got a good counterplay. Soon Black managed to open the big diagonal for his bishop; provoking massive exchanges, and immediately after reaching the 40th move, the opponents agreed to a draw.

Fabiano Caruana used a positional pawn sacrifice in the so-called "anti-Marshall" variation of the Ruy Lopez, developing pressure on the Black’s queenside. White's position looked very promising, but when the opponents had a pawn clash in the center, the American grandmaster did not act in the best way and found himself on the defending side: Ding Liren had an extra pawn, albeit a doubled one.

In order not to get to a passive defense, Caruana bravely pushed his pawns away from the king and caused a crisis. Players soon began to exchange pieces and eliminated their weak pawns. In the resulting endgame with rooks and knights, it seemed that Black still had some opportunities to play for a win, but Ding Liren, evidently, considered them insufficient and immediately agreed to a draw.

Speaking about his further chances to catch the leader, Fabiano Caruana pointed out: "A one-point lead isn't insurmountable”

Indeed, it was the most exciting game of the day, keeping the audience on their toes until the very end. The opponents chose the old system in the French defense, which was used by the first world champion Wilhelm Steinitz at the end of the 19th century. White's idea is to firmly "cement" his pawn chain in the center while being slightly behind in the development.

The first critical position arose after White's 11th move. Black had to complicate the position, otherwise White, having completed development, would have achieved a stable advantage. Grischuk knew that the move 11.Qd2 (instead of the main theoretical continuation 11.Qb3) was not dangerous for Black, but he could not remember his analysis. Wang Hao admitted that he simply confused the preparation and in fact was preparing a completely different line. As a result, Alexander spent 72 minutes thinking (“This is not a record to be proud of,” the Russian grandmaster admitted) in order to calculate all the variations. During the press conference, Wang Hao was not hiding his admiration while his opponent was displaying all the spectacular options. Grischuk rightly believed that in response to 11 ... cxd4 White should capture the pawn with the e2 knight, but Wang Hao played differently. In this case, Black could have immediately gained an advantage, but Alexander simply did not have enough time to assess the new situation. He played less ambitiously and White took over the initiative again.

The second critical moment occurred on move 21 when Wang Hao recklessly sacrificed his queen for two minor pieces, creating dangerous pressure on the enemy king. “There were a lot of traps here, and some of them could work” (A. Grischuk). In severe time trouble, Black chose to give back material in order to protect his king. When the smoke cleared and the first control was passed, there was a drawish fortress on the board.

"Yesterday I was watching some stream with Kramnik and Bareev commenting. Speaking about today's round they said that Wang Hao-Grischuk is the least interesting game of the round. I wonder if they still think the same way," said Alexander Grischuk after the game.