Round 1 to be played on September 11. 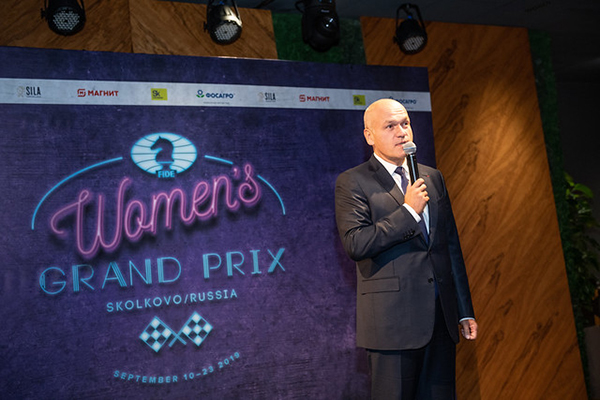 The first of four stages of the 2019-20 FIDE Women Grand Prix is taking place in Skolkovo, Russia, from 10-23 September.

The opening ceremony of FIDE Women’s Grand Prix was held on September 10.

Jan Dunning, Director General and CEO of PJSC MAGNIT, one of the main sponsors of the event, RCF President Andrey Filatov, and FIDE President Arkady Dvorkovich gave speeches at the opening ceremony.

The time control is 90 minutes for 40 moves, followed by 30 minutes to the end of the game, plus a 30-second from move one. No draw offers are allowed before move 30. The games start every day at 3 pm (Moscow time). The rest day is on September 17.

The prize fund is 80,000 Euros, with 15,000 Euros and 160 Grand Prix points for the winner. Each WGP tournament is played with twelve player round-robin. In each WGP tournament, every player scores WGP points according to her position in the final standings. The two players who score the most number of cumulative points in WGP Series qualify to the FIDE Women Candidates Tournament in 2021.

The first round will be played on September 11.